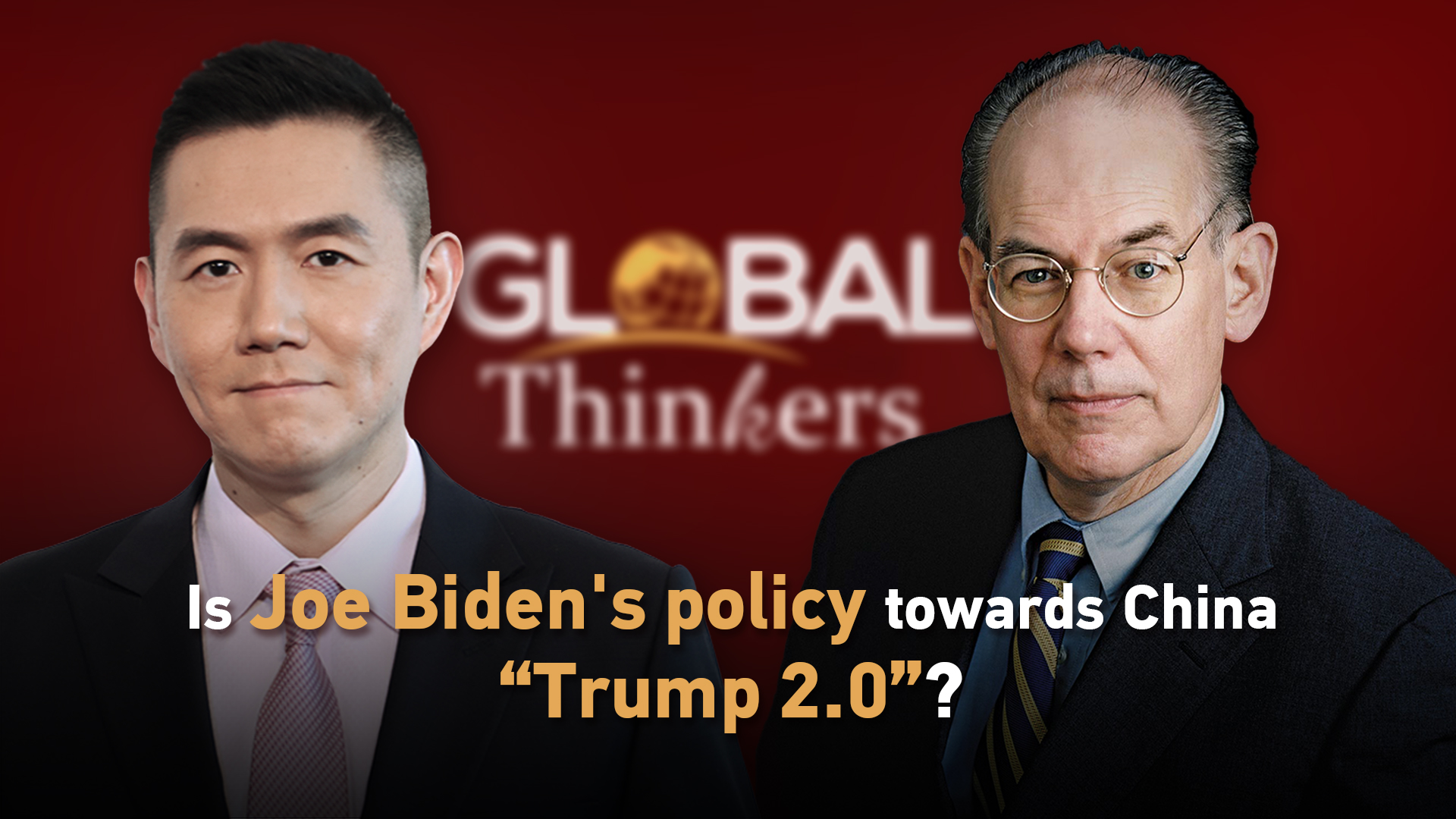 Editor's note: John Mearsheimer, Professor of Department at Political Science at the University of Chicago tells Wang Guan that China's achievements, instead of ideological differences, lead to strategic competition between China and the United States. He also points out that Joe Biden's policy is almost "Trump 2.0". Besides cooperate in certain areas, competition between the two sides continues.

Wang Guan: I want to welcome all of our viewers from around the world to another edition of Global Thinkers. I'm Wang Guan in Beijing. And today, it is our great pleasure to have with us, political scientist, scholar, and author, Professor John Mearsheimer, he is currently with the Department of Political Science at the University of Chicago. Sir, welcome to CGTN again.

China eradicated poverty last year according to official data, and also it is launching the 14th Five-Year Plan - a roadmap guiding China's economy and social political development. How do you look at those domestic Chinese programs?

John Mearsheimer: I think that they have been largely successful. I think there's no question that huge numbers of people have been lifted out of poverty in China over the past four or five decades. And from a Chinese perspective, this is a wonderful thing. I would imagine that the Chinese government will go to great lengths to sustain those gains, and to bring those people who are left in poverty, out of poverty. This is a great accomplishment.

In terms of running the economy, few countries in the history of the world have done a better job of growing their economy than Chinese leaders have done. They have been wildly successful. That's why, in my opinion, we now have this strategic competition. I think, to be honest, the biggest problem the Chinese face moving forward in terms of domestic politics is population decline. I think this is a worldwide problem. It's not limited to China by any means. In fact, I think South Korea has the lowest birth rate in the world. Japan has a remarkably low birth rate. The United States is beginning to experience a downward movement in its birth rate, and there's no sign that's going to slow up.

Wang Guan: We can regard the whole international community as this one global village under this economic globalization. If you think about the COVID, I mean, no country is safe until all are safe. You think about climate change, we're all in this together. Can't you look at it that way?

John Mearsheimer: I think there's no question that there are certain areas in which China and the United States will cooperate. I think proliferation is one of those issues, for example. I think that the Chinese and the Americans and the Russians will all cooperate to limit nuclear proliferation. I think with regard to climate change and pandemics, you're likely to get significant cooperation on those fronts as well. But the key point is that the overall relationship between the United States and China will be one of competition, strategic competition, and it'll be a dangerous competition because there will always be the possibility that that competition will turn into a war. So you'll have some cooperation, but it will be part and parcel of an intense security competition.

Now you say, "isn't this an outdated way of thinking about international politics? Hasn't the world changed?" The answer is no.

Wang Guan: How would you rate Joe Biden's policy towards China? Is it "Trump 2.0"?

John Mearsheimer: It's almost "Trump 2.0". It's very interesting. But a lot of people thought that when Biden took office that he would go back to the China policy of the Clinton administration, the Bush administration and the Obama administration where he had been vice president. That's another way of saying a lot of people thought we would go back to pursuing a policy of engagement instead of the containment policy that Trump pursued. But what's happened is that Biden has largely followed in the footsteps of his predecessor Donald Trump. There's no evidence that there's any significant difference between Biden and Trump, except for one thing, and that is Biden is much better at working with allies than Trump was.

Trump was at heart a unilateralist, and Trump really had little use for our allies, and this includes countries like the South Koreans and the Japanese, who we have historically had very close relations with. Trump just didn't see much need to cooperate with them to contain China. Biden is different on this very important dimension, and Biden will go to great lengths to put together an alliance structure in East Asia that is designed to contain China. But other than how Biden deals with allies, I don't think there's much difference between him and Trump.

Wang Guan: Professor, many in the Biden administration and many liberals in America say that there is a necessity to contain China's rise because of values or because of different ideologies, and they point out the so-called "fact" that there is this human rights concern in Xinjiang, over Hong Kong. Is that really the case? Is that really why? I mean, is it really over "ideologies" and "different values" that America is afraid of China's rise?

John Mearsheimer: I think there's no question that rhetorically, American policymakers and American elites, in general, will emphasize that the competition between the United States and China is about ideology. It's about two different political systems competing with each other. And this is analogous to what happened in the Cold War when we talked about the Soviet Union as a communist state and the United States as a capitalist democracy. Ideology was very important rhetorically in the Cold War, as it will be in the U.S.-China competition.

Is this really a competition that's ideological at its core? The answer is no. The United States has had wonderful relations with China for a long period of time - for many decades. The United States in 1985, 1995, 2005, and 2015 had no difficulty dealing with this state. There's been no change in the political system in China. So, what's going on here is that to mobilize political support in the west against China - and even in East Asia against China. But that's not what's driving the train here. What's driving the train is power politics. So it's that power competition, not ideological competition that is the root cause of the situation that we see today.