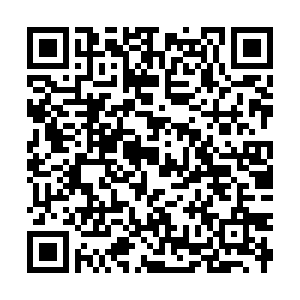 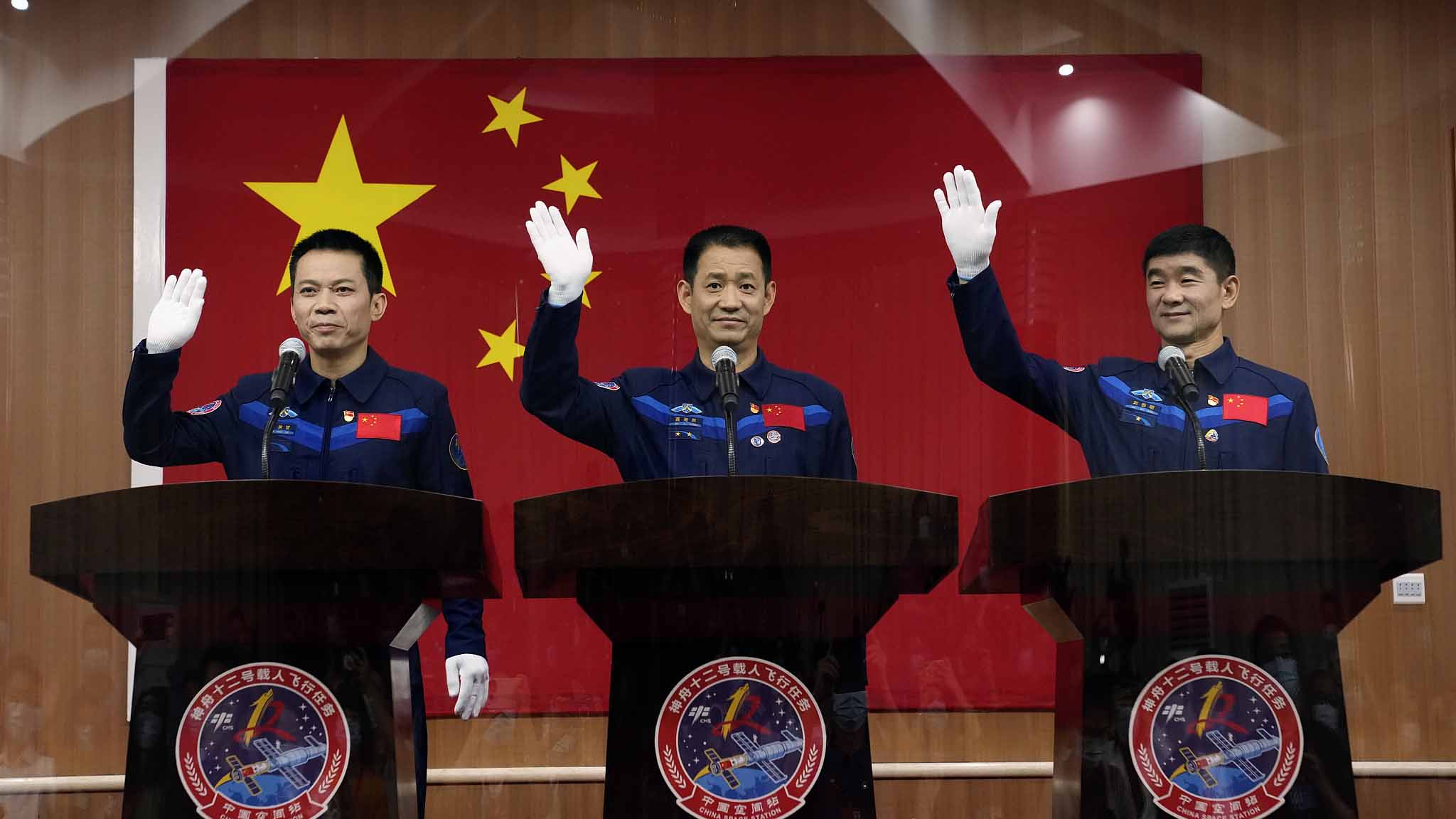 "All systems conducting the Shenzhou-12 mission have undergone a comprehensive rehearsal. The flight crew is in good shape," said Ji Qiming, assistant to the director of the office, in a press release.

They will go to space and help assemble China's first space station and conduct scientific experiments.

The mission, called Shenzhou-12, is the first of the four Tiangong space station missions. 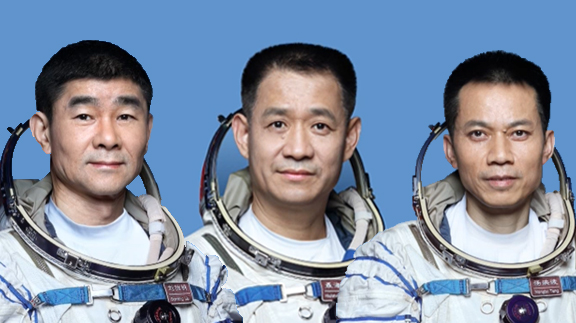 Here are some basic facts about the three astronauts: 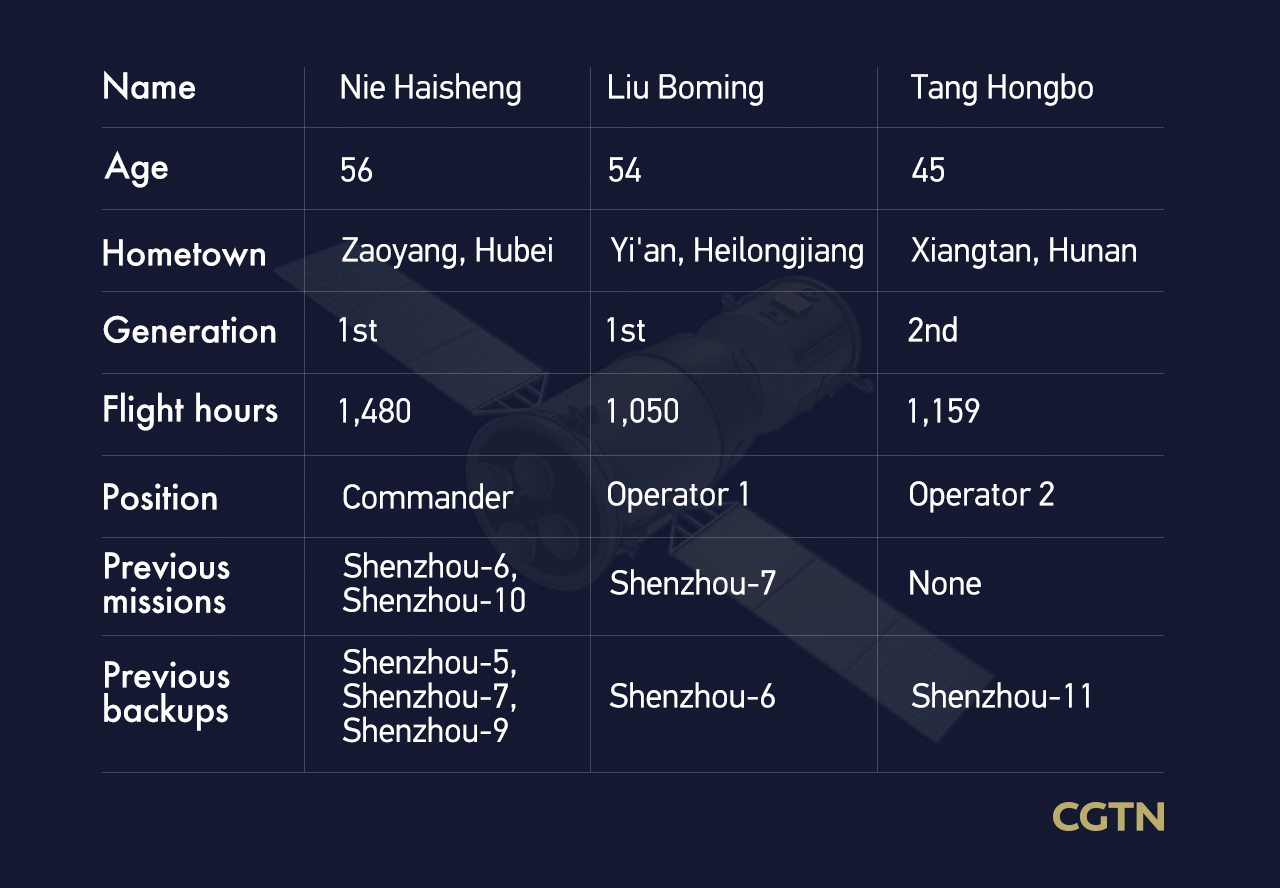 Shenzhou-6, conducted in 2005, was China's first space mission with more than one astronaut, while Shenzhou-10, launched in 2013, tested docking technology.

Nie, the most experienced crew member, will lead the team on the Shenzhou-12 mission, including long-time operations outside the cabin aided by machine arms.

He is the oldest astronaut in China. "I just want to go to space," he said before the Shenzhou-10 mission.

In a separate press conference with the three astronauts, Nie told reporters that he felt fortunate to be among the first people to enter the Chinese space station.

"We have the blessings of the people, the support of the staff and the skills learned from training," he said. "I'm confident we can successfully carry out this mission."

Liu is not young either. Born in 1966, he was selected as an astronaut together with Nie Haisheng.

During the Shenzhou-7 mission in 2008, Liu helped Zhai Zhigang to conduct a spacewalk.

Liu learned about manned space missions during high school and applied to become a military pilot without the knowledge of his parents. He became a fighter jet pilot in 1990 and has recorded more than 1,000 hours of safe flying.

He is a major general in the People's Liberation Army.

This time, Liu is facing a much harder job.

"I have to stay longer outside of the cabin and carry out much more complicated jobs," he told reporters. "But we have gone through systematic training sessions and will wear our new-generation space suits. I have more confidence to finish my job than last time."

Tang, 45, is a second-generation astronaut with 11 years of experience. It took much longer than  he expected to be selected for a real space mission.

"I knew I had to remain tough," he told CMG. "But I didn't know I needed to stay tough for such a long time."

He was a backup astronaut for 2016's Shenzhou-11 mission.

"I have been preparing for the last decade," he said. "I hope I can spend my next decade contributing to the space station."

Tang admitted he's a bit nervous about the mission.

"There's some pressure definitely," he told media. "But I believe I can turn the stress into motivation."

Two other astronauts, Deng Qingming and Ye Guangfu, had been rumored to be among the Shenzhou-12 astronauts. Ye has been selected to be a backup for the mission, together with Zhai Zhigang and Wang Yaping.