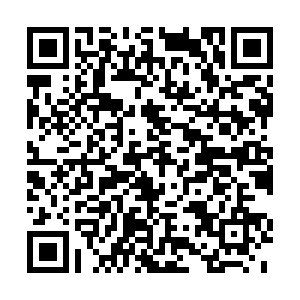 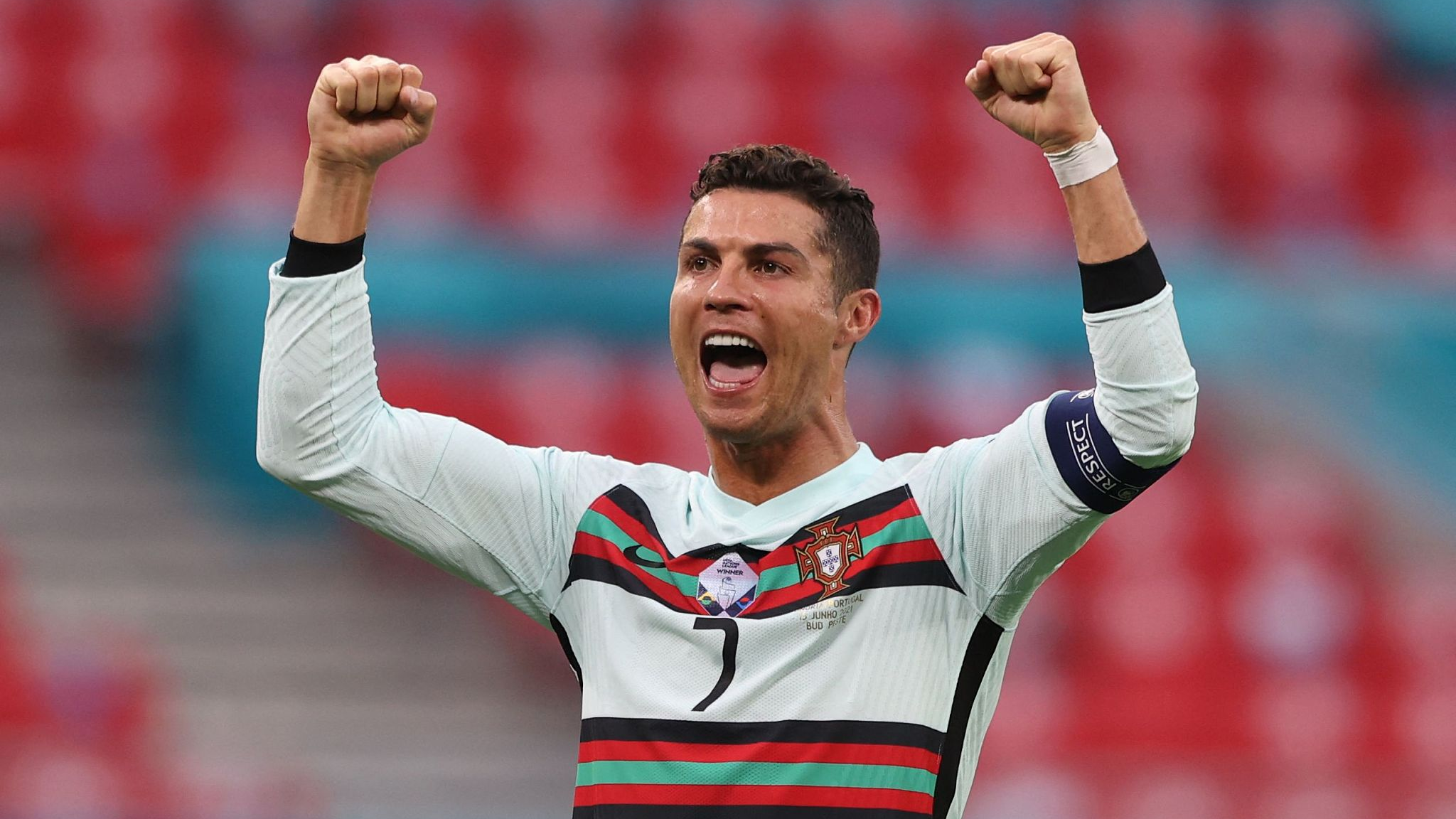 The deafening roar at the Puskas Arena in Budapest, Hungary, was music to the ears of football fans around the world, as a full house of 67,000 fans watched Hungary take on Portugal in their European Championship opener on Tuesday.

Cristiano Ronaldo led Portugal to a 3-0 victory, as he became the all-time leading goal scorer in European Championship finals after his two goals in this match -an 87th-minute penalty and a close-range strike two minutes into stoppage time that set his record at 11, two clear of former French captain Michel Platini. Meanwhile, the 36-year-old has extended his remarkable run of scoring in 11 consecutive international tournaments, stretching back to his first, at Euro 2004.

Ronaldo was left only blaming himself late in the first half though, when he uncharacteristically missed the target from close range after an incisive cross from Bruno Fernandes.

Striker Adam Szalai was Hungary's main threat, heading a free-kick into the arms of Rui Patricio shortly before halftime, then testing the keeper again early in the second half.

Portugal's veteran defender Pepe nearly scored at the start of the second half but was thwarted by the ever-alert Gulacsi, who later turned away a strike from Fernandes.

Hungary substitute Szabolcs Schon set the stadium alight in the 80th minute when his shot squirmed past Patricio, but the linesman's flag was quickly raised to puncture the celebrations.

Guerreiro soon brought the hosts more pain as his scuffed shot trickled into the far corner of the net off the foot of Hungary defender Willi Orban, who moments later fouled Rafa Silva to allow Ronaldo to score from the spot.

Ronaldo then combined with Silva to calmly dance past Gulacsi and round off a day of records after also becoming the only player to feature in five European Championships and to play the most games at the finals.

Sluggish Germany falls behind at home

Also on Tuesday, title favorites France launched their Group F campaign with a 1-0 victory over Germany, courtesy of an own goal by Mats Hummels, as the sluggish-looking hosts lost their opening fixture at the European Championship for the first time. 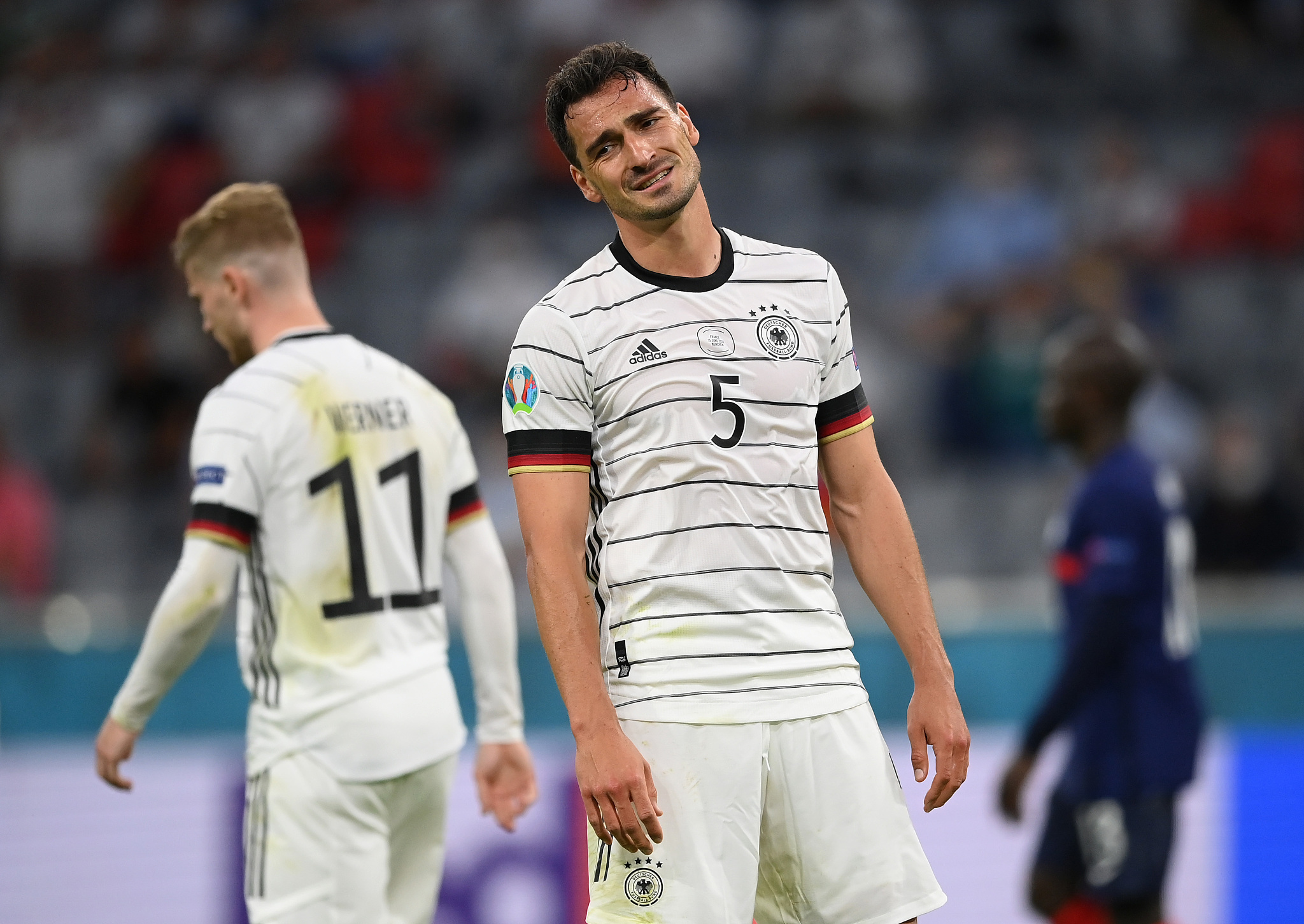 The world champions went ahead in the 20th minute when midfielder Paul Pogba's raking pass was fired back across the goal by Lucas Hernandez and defender Hummels shanked the ball into his own net as he tried to clear it.

It was a deserved win for France, who also hit the crossbar while the Germans now have to up their game against holders Portugal on Saturday, while France play Hungary.

"It was our first match and it was a huge game," said France coach Didier Deschamps.

"It could have been a semi-final or a final. But we have the three points that will be very important. They are tough to play against but we were there, on the spot. This win does a lot of good."

Germany's record 50th Euro match got off to a tentative start before a couple of French chances fell to Pogba and Kylian Mbappe.

The visitors' gradual pressure paid off when Pogba launched an outstanding cross-field pass to Hernandez, who cut the ball back only for Hummels, who had been dropped more than two years ago and was recalled for the tournament, to clip it into the roof of the net past his own goalkeeper Manuel Neuer.

When they did it was usually with Robin Gosens from the left, and one of his crosses found Ilkay Gundogan, whose shot veered wide of the post.

It was France who almost scored again in the 52nd when another quick break saw Adrien Rabiot cut in from the left but he hit the post with Neuer already moving in the opposite direction.

That looked to shake the hosts into action, and they carved out three consecutive chances, with Gosens again in the mix, until an injury to Benjamin Pavard around the hour mark gave the French some much-needed respite.

France gradually conceded possession but remained lethal on the break with Mbappe and Karim Benzema both putting the ball in the net but having their efforts ruled offside.

Mbappe was also denied what looked like a penalty after out-sprinting Hummels to chase down a long ball in the 78th minute, but replays showed the German got just enough boot to the ball to prevent a shot before Mbappe went to ground.

"It was a brutally intense game and we fought until the end," Germany coach Joachim Loew said.

"An own goal decided it. I cannot blame the team because we fought a lot. We maybe lacked a bit of punching power in and around the box."

France, unbeaten in their last 17 competitive outings, are second in Group F behind holders Portugal.