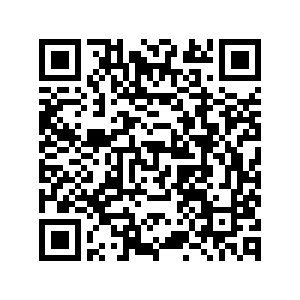 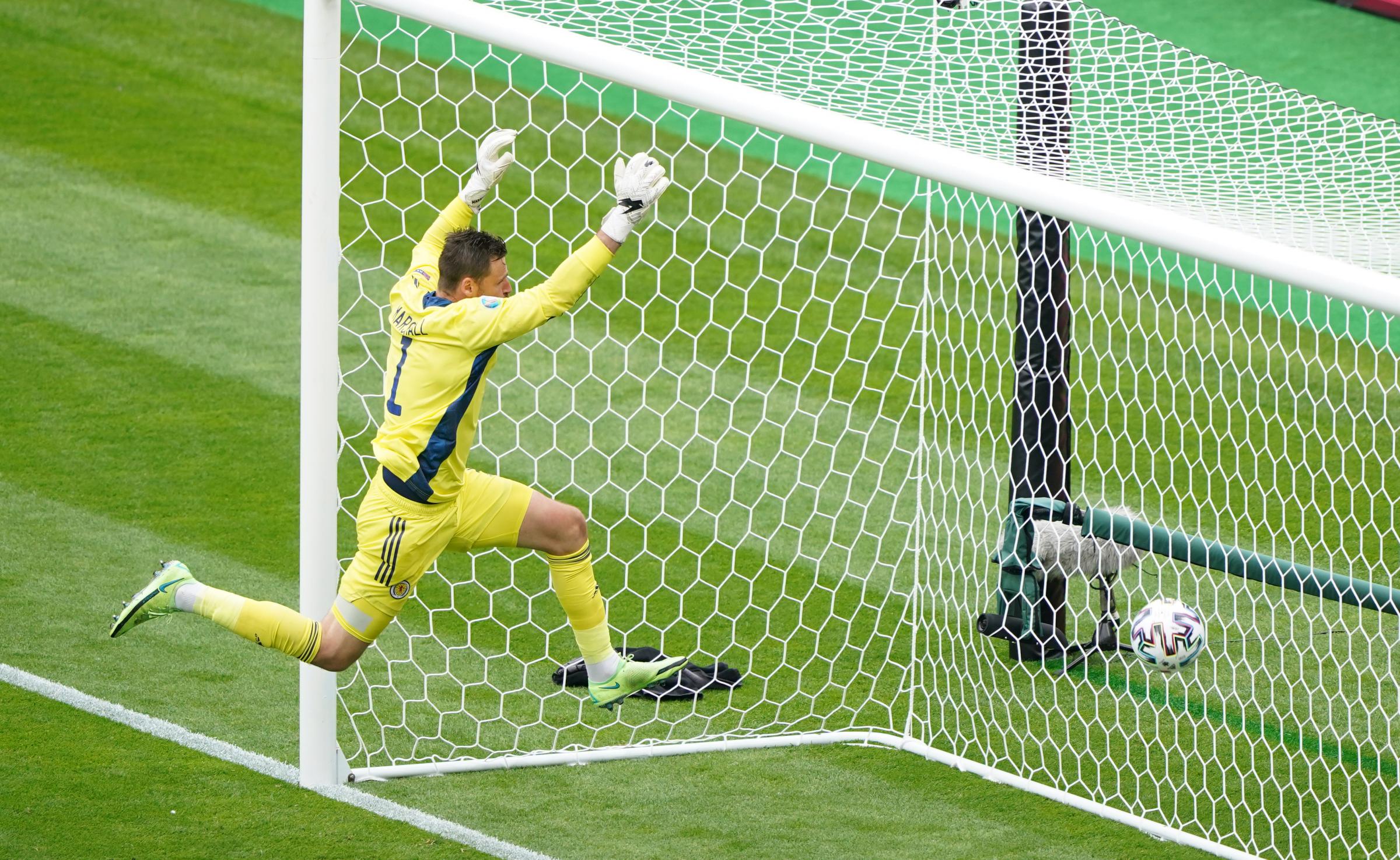 Scotland goalkeeper David Marshall leaps into his own goal to try and save a shot by Czech Republic's Patrik Schick. /AP]

Scotland goalkeeper David Marshall leaps into his own goal to try and save a shot by Czech Republic's Patrik Schick. /AP]

What's worse, being bad or being unlucky? Scotland have been unequivocally bad since France 1998, the last international tournament they played in before Euro 2020. So, there was a lot of expectation for their return in a match against the Czech Republic at Hampden Park in Glasgow.

Throughout the fixture, Scotland were the better team. They almost doubled Czech Republic's total shots with 19 to 10 and bossed possession too with 58 percent. As expected of their club pedigree, Andrew Robertson of Liverpool FC and Scott McTominay from Manchester United put in excellent work along the left channel and provided plenty of service up front, only to find the Czech defense, masterminded by Tomas Soucek too much to handle.

Ultimately, none of that matter unless you can put the ball away, and the Czech Republic were able to do that, thanks to Patrik Schick, their gunman at the top end of a counter-minded 4-2-3-1 formation. He scored once just before halftime; however, it's his second that was truly important.

In the 52nd minute, he was making a break up the pitch when he noticed Scotland goalkeeper David Marshall outside of his box. Schick volleyed it from just outside his own half, well over Marshall's head and into the goal. To make matters worse, in his desperate attempt to scramble back to stop this worldie from going in, Marshall ended up tumbling into his own net and becoming a meme. 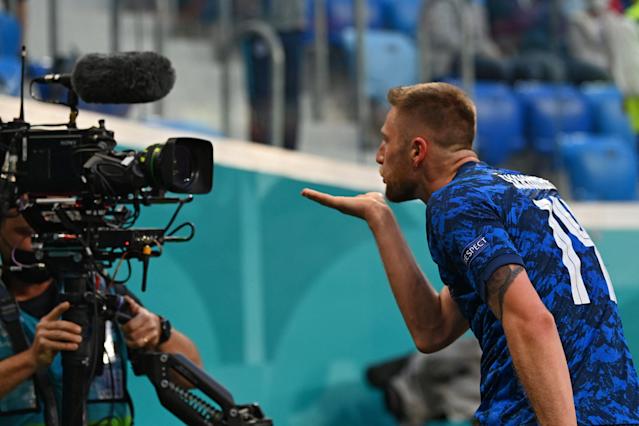 Czech Republic's Milan Skriniar celebrates scoring his team's winner against Poland by blowing a kiss into the camera. /Getty

Czech Republic's Milan Skriniar celebrates scoring his team's winner against Poland by blowing a kiss into the camera. /Getty

Is there a curse on this Poland team? Every tournament, they arrive with high expectations following success in the qualifiers and then manage to be outclassed when the competitive games arrive.

Slovakia were the underdogs of Group E and Poland, equipped with the best forward in the world, Robert Lewandowski, and other talented players in every position, must have thought they would get the whole three points from this game.

They began with pure offense, flying forward and overloading the Slovakian territory, keeping only the centerbacks in their own half, but struggled to break through a side willing to sit back deep and counter. Lewandowski had practically no touches and, when he did get the ball, was swarmed instantly. The same could be said of fellow forward Napoli's Piotr Zielinski.

Then, when Slovakia did make a break for it, Poland looked like deer in the headlights with plenty of players in defensive positions – all of them stock-still. Robert Man took advantage of this and danced through the Polish team and got a goal that was quickly reassigned as an own goal (OG) as it bounced off the post and onto Poland keeper Wojciech Szczesny's head before going in.

Poland looked to have fixed their mistake at the opening of the second half as Karol Linetty scored within 60 seconds, but once that was done, they became static again. They also conceded the first red card of Euro 2020 and defender Milan Skriniar soon punished them for it to make it 2-1.

He's a big, solid man not known for his goalscoring prowess. For his club side, Inter Milan, he's rarely, if ever, in this position. But Poland gave him enough time and space to take the ball on his chest from a corner and play it down into a half-volley. 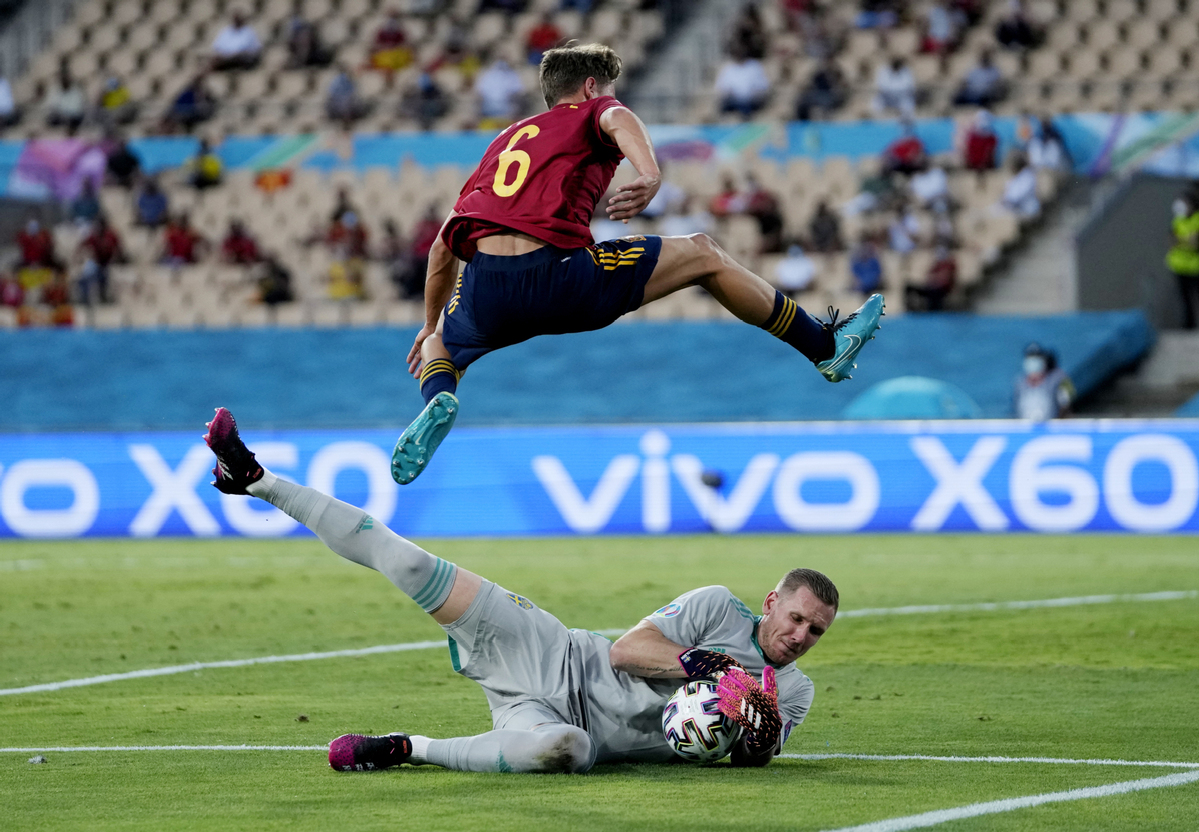 Spain manager Luis Enrique is in an unfavorable position: He's managing a team in transition, as veteran players are being replaced by a younger generation; he's altering what are considered to be the traditional possession-heavy tactics of Spanish football, and to make matters worse, he went out of his way not to take any players from Real Madrid. This is the first time in Spanish football history that has happened.

From pretty early on, he must have believed his maverick moves were paying off as his Spain dominated control of the game to a record-breaking degree. In the opening half alone, they had 79 percent possession and made over 400 passes, more than most games have overall.

However, Sweden are one of the best coached sides in the tournament. With the exception of Victor Lindelof and Emil Forsberg, the Swedes aren't a team of household names, but each player knows exactly what their role is and can enact it perfectly.

As Pedri, Rodri and Koke orchestrated the Spanish midfield press, often from positions so high that they were on the tip of the Swedish penalty box and tried various attacks, Sweden locked themselves into a classic 4-4-2 and made sure nothing got through.

If and when it did, Robin Olsen, Everton's back-up goalkeeper, was there to stop it, and he gave an iconic performance on par with fellow Everton alumnus Tim Howard's game against Belgium in Brasil 2014. Every one of Olsen's stops and deflections palpably sucked the confidence out of this young Spain team.

Only twice did Sweden get shots off in the Spanish half all game, and both chances were sadly wasted. Twenty-one-year-old Alexander Isak stayed cool under pressure as red shirts barreled toward him and made a shot that was deflected onto the post by Marcos Llorente. Later, during a genuine counter, Marcus Berg was faced with an open goal and side-footed it into orbit instead.