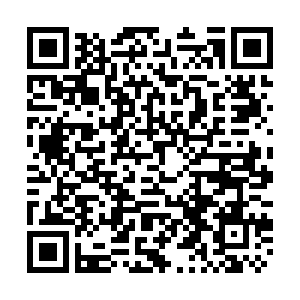 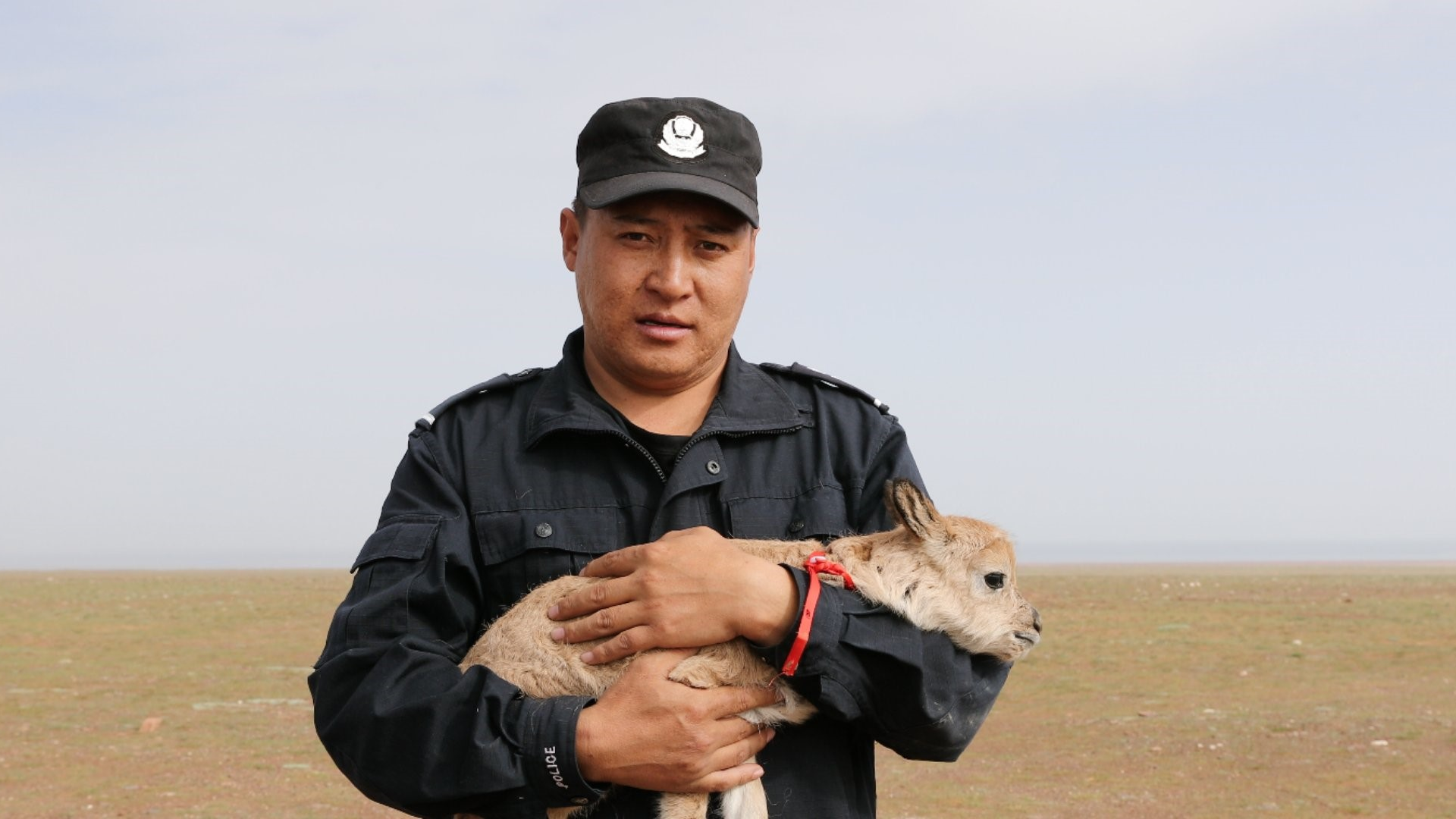 It was a summer afternoon, yet it suddenly began to snow in Hoh Xil in northwest China's Qinghai Province.

Choephel Tashi closely watched the group of Tibetan antelopes that had been wandering for hours somewhere not far from him.

"We need to take temporary traffic control when the antelopes are about to pass the road to ensure their safety," Tashi explained with a bit of anxiety.

It's the busiest season of the year for Tashi and his colleagues. Starting May each year, Tibetan antelopes from different regions, mainly four nature reserves in Qinghai Province, Xinjiang Uygur Autonomous Region and Tibet Autonomous Region, all migrate to Hoh Xil to give birth. Tashi and his team have to take various measures to protect them.

"It's been a habit, but also a kind of responsibility," said Tashi.

At an altitude of more than 4,500 meters, with sub-zero temperatures prevailing all year round, Hoh Xil is considered a "death zone" for human beings. Tashi's affection for this large "no-man's land" started two decades ago.

"I first came to Hoh Xil when I was 13. My father was working here back then, and I was a middle school student. After that, I often came here with him on vacation," said the 39-year-old Tibetan man.

Tashi applied to work here after graduating from college, giving up other options to work as a public servant, a police officer or a journalist, among some other occupations. He admitted that it's a decision inspired by his father and his uncle on his mother's side – Jeasang Sonam Dargye, a well-known hero of this pristine land. 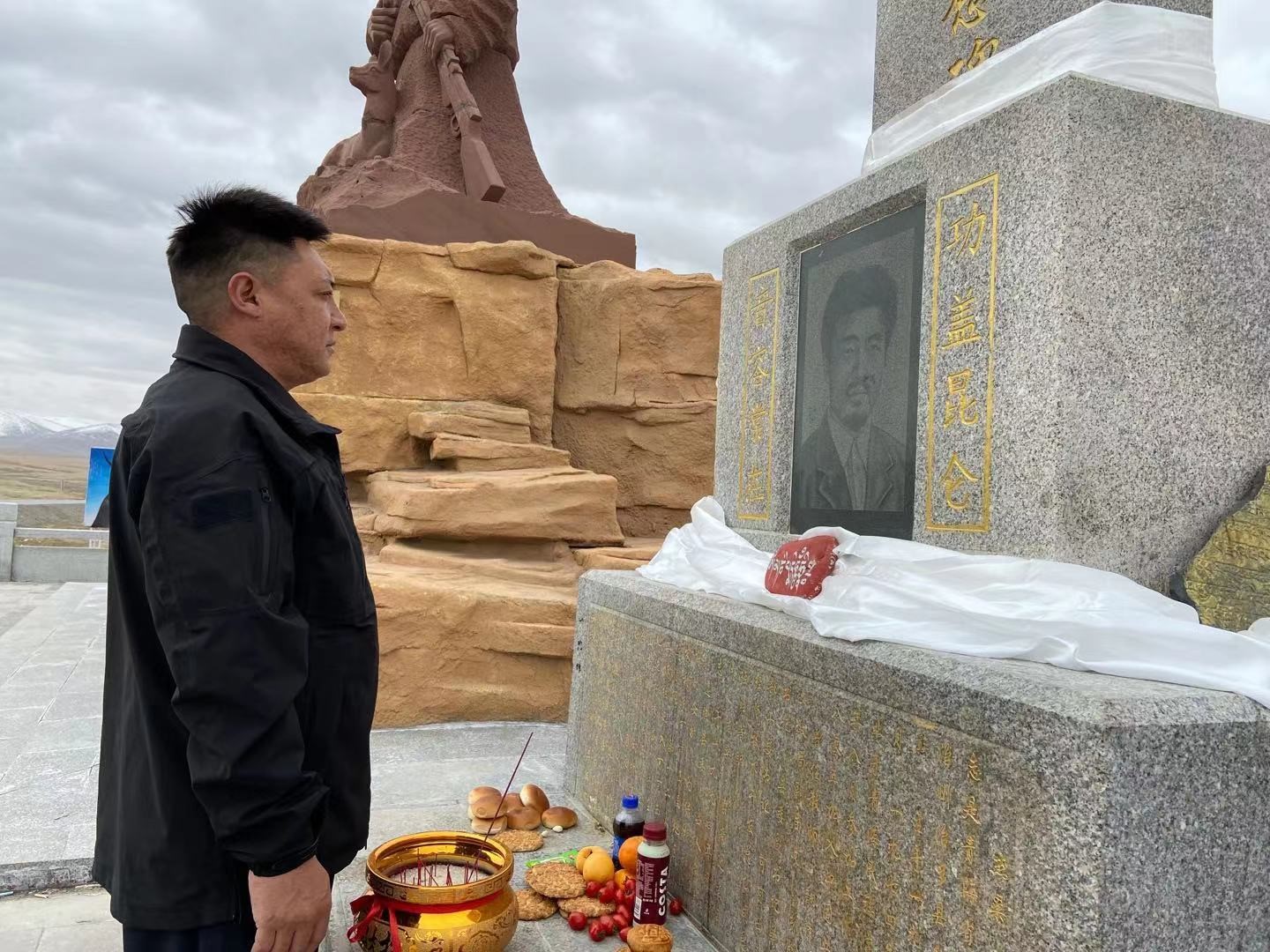 Back in the 1980s, a large number of miners and poachers swarmed to the area, digging gold and slaughtering Tibetan antelopes for their hides, which were made into expensive shawls. To curb the rampant killing, Sonam Dargye founded a special organization fighting on the frontlines. In January 1994, he was shot dead during a confrontation with dozens of hunters.

Tashi's father took over the mission, and also gave his life for the cause. Their sacrifices prompted the establishment of a national nature reserve in 1997, becoming one of the largest in the country.

"It's a great loss for both the family and themselves. But looking back at their choices and their whole career, they were far-sighted in terms of what they did for society and the natural environment," said Tashi. "Since they've forged a kind of spirit, I think I should carry it on."

He added that his family fully supported his choice.

Guarding the pure land with perseverance

But defending this vast territory of 4.5 million hectares against poachers, miners, and trespassers is a tremendous challenge. The routine patrols are full of difficulties.

"More than 90 percent of the land here is composed of frozen soil, which turns into a big swamp in summer. A car got stuck once, meaning the wheels and chassis got overwhelmed. Getting it out was a great pain," said Tashi. 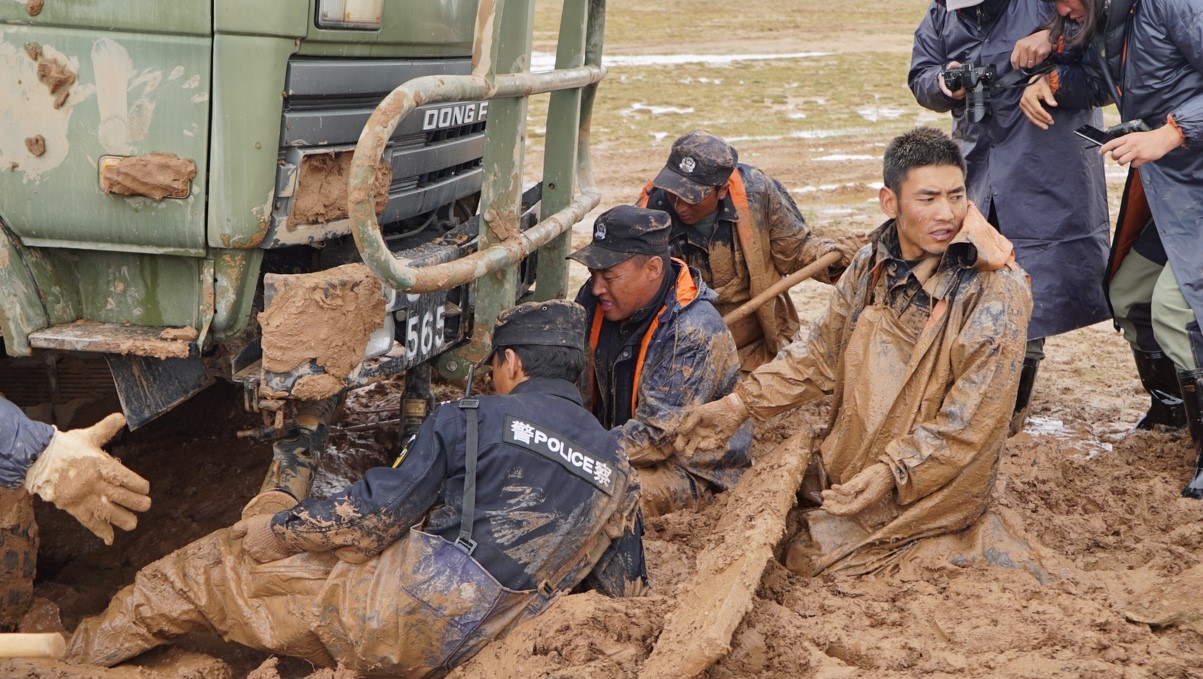 It's circumstances like these that can seriously test the mettle of anyone working in such a challenging environment.

"I was once trapped for more than 10 days and almost ran out of food. Fortunately, we brought along a kind of Tibetan specialty made of highland barley powder, which kept me alive," Tashi recalled.

He is now the head of a protection station near Zonag Lake, where female Tibetan antelopes across the country migrate to give birth every year. An important job for him is to create a peaceful environment for the mothers-to-be.

"Though there have been no gunshots for more than 10 years, we still have to stay alert. Many people also come here for scientific research in the summer, and we need to properly guide them to avoid disturbing the antelopes," he said.

For any newborns who fall behind during the migration back home, or whose mothers are eaten by predators, he and his colleagues rescue them and take care of them like they're their own children.

"If they get sick, they are reluctant to take medicine just like children, even if you put it into milk. In this case, the only option is to feed them mouth to mouth. I don't mind it if they don't mind, as long as they can pull through," Tashi said of his experience of looking after the sick antelopes.

The efforts of conservationists like Tashi are paying off. In the mid-1990s, Tibetan antelopes were at the edge of extinction in Qinghai, and the population of the species today has grown to at least 70,000. And other species of wildlife can also be often seen in the reserve. Now, a total of five protection stations have been set up across the nature reserve.

"During the process, I've witnessed something bloody, and got some 'scars' that won't heal, but what makes me happy is Hoh Xil becoming a genuine 'paradise' for wild animals, and to some extent, a landmark in China's cause for environmental protection," said Tashi. 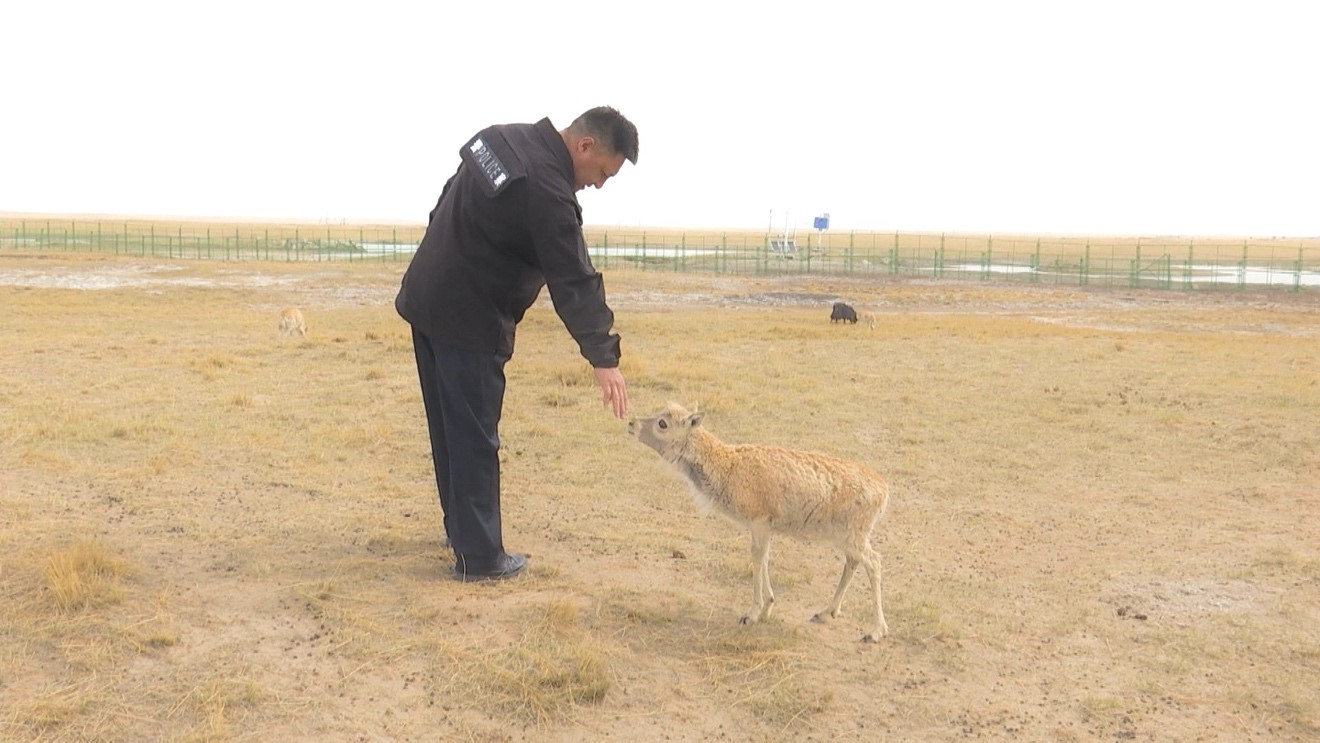 Looking to the future, Tashi said he never wants to separate from this sacred land – out of love and responsibility as a member of the Communist Party of China. He's also pleased to see that more members of the younger generations are joining the undertaking.

Two of their cars fell into a river during their regular patrol in December. Some of the young rangers jumped into the freezing water to rescue their fellow workers without any hesitation.

"I felt sorry for the children, but I was very moved at the same time," said Tashi.

Twenty-one-year-old Deng Haiping is one of the young Hoh Xil guardians. He has also encountered many emergencies and accidents over the past few years. He was once hit by a truck while trying to rescue an injured Tibetan antelope and got seriously wounded.

"It's all worth it to see the reserve getting more and more beautiful and tranquil," said Deng. 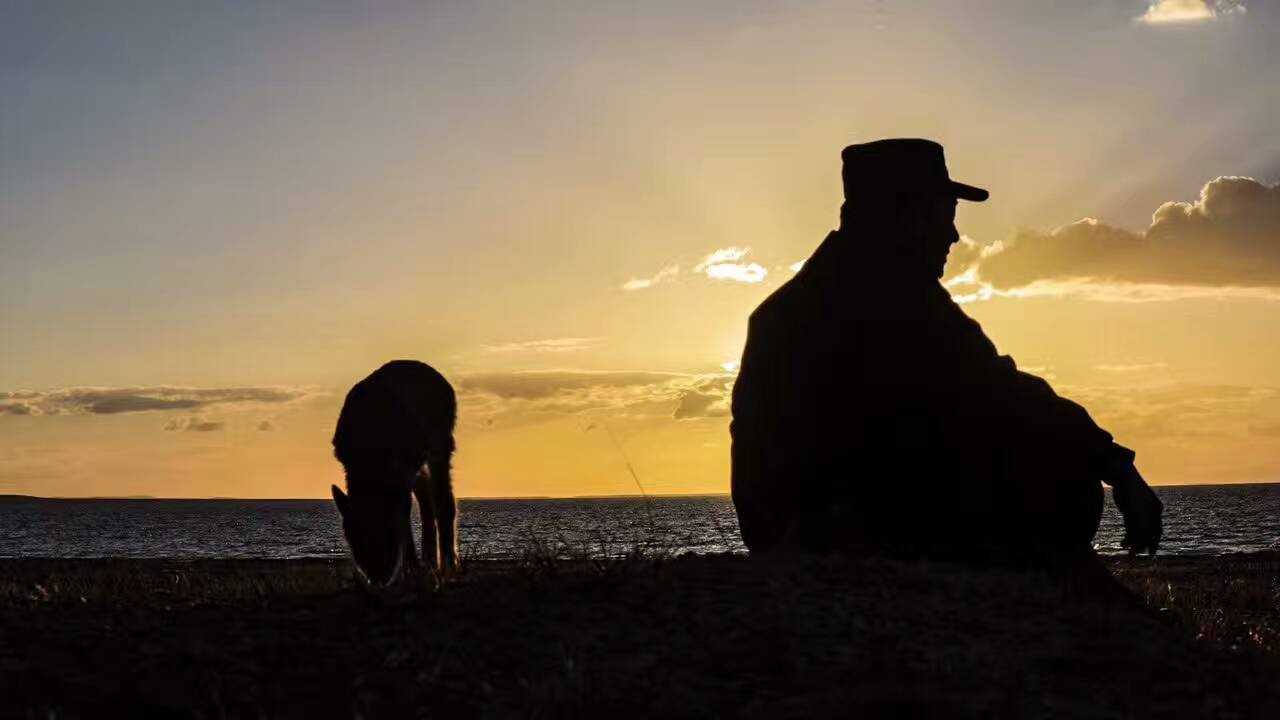 Tashi said that despite all the challenges and suffering, he has never felt any regret; instead, he feels proud of his choice.

"Since my older generation brought something valuable to this region, I've never thought of what I could get from here, but do my best to carry on their unfulfilled wish. I think this is just the meaning of my life," Tashi said.