Download
The reinvention of the last coal mine in Beijing
Yu Jing , Liu Xiaoxian 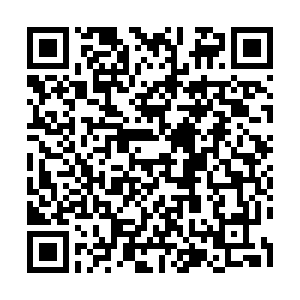 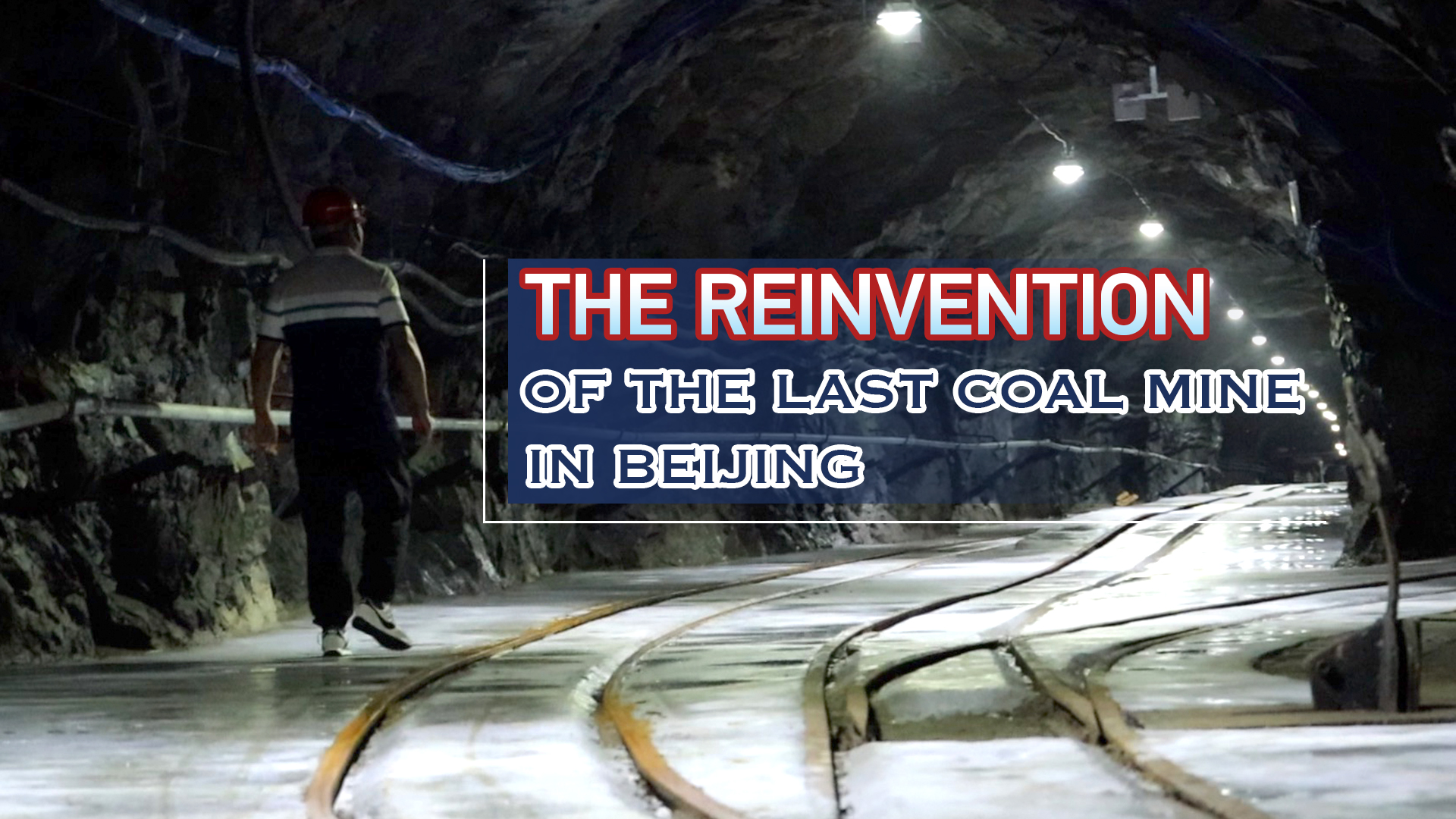 To descend into the bowels of the earth, through the tunnel at Datai coal mine, is a heart-wrenching experience. It is freezing inside the mine. Water is dripping from the roof above the coal face. Standing up straight is impossible.

But 40-year-old Wang Haijun still became emotional as he went underground. A good 18 years of his life was spent in the mine, and now with its closure, he has bid farewell to a part of his life as well as a workplace that was turned into history.

Datai, in southwest Beijing's Mentougou District, was the last coal mine to be shut down in the capital. As China battles with environmental pollution and pushes for green development, coal is gradually being phased out. The country is switching to more environmentally-friendly energy sources and embracing renewables.

For hundreds of years, the mine was a lifeline for residents in Beijing – more than 30 percent of the coal used in Beijing came from Datai coal mine before the mine was closed in 2019. In the late 1990s, the mine started to provide coal for overseas markets. Japan was the biggest market for export. 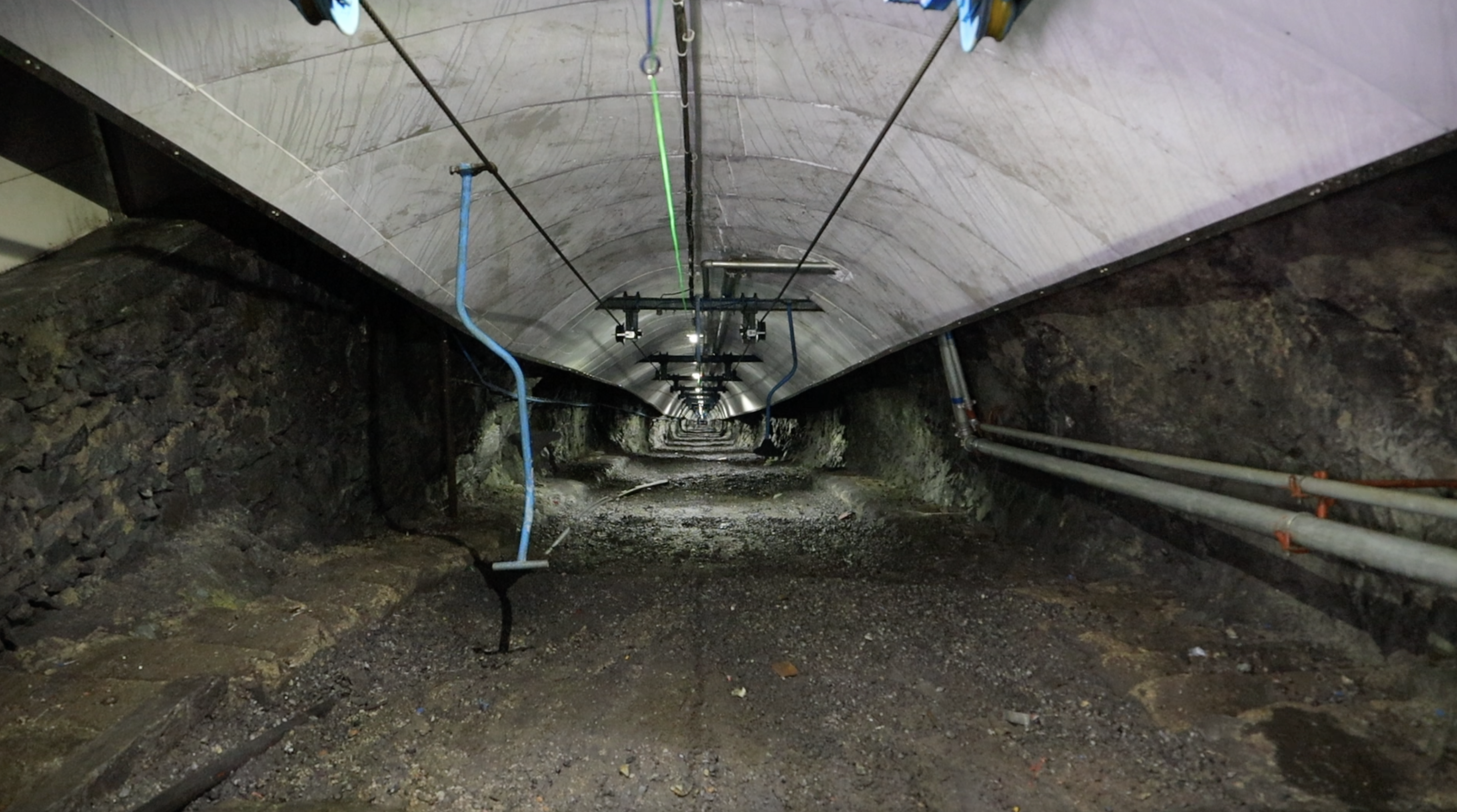 A cable car that took miners directly deep down the mine. /CGTN

A cable car that took miners directly deep down the mine. /CGTN

Coal was once considered "black gold," because of the central role it has played in powering China's economic surge over the last 30 years. According to data from the Ministry of Ecology and Environment, in the 1950s, coal used to supply more than 90 percent of China's energy and that share consistently stood above 60 percent until 2018.

But coal is also the main driver of PM 2.5 air pollutants. According to a 2016 study by Tsinghua University and the Massechussets-based Health Effects Institute, coal was responsible for about 40 percent of PM 2.5 air pollutants in China's atmosphere in 2013. In the Beijing-Tianjin-Hebei region, coal combustion from small burners and residential uses was the main cause of heavy pollution.

Since 1998, China has started to reduce the use of coal in the total energy consumption mix.

In northern China where coal-burning was the predominant heating fuel in winter, local governments took specific measures to implement coal-to-electricity projects. Besides replacing coal-burning burners, the government also promoted the closure, readjustment and reorganization of coal mines, and encouraged the broader use of gas, solar and wind.

In Beijing, after the city won the right to host the Winter Olympics in 2015, the local government promised to reduce PM 2.5 emissions by 45 percent against the 2012 level by 2022. To reach this target, changing the coal-dominated energy structure became a prime necessity. In 2016, China set a goal to eliminate as much as 500 million metric tonnes of annual coal output in three to five years. 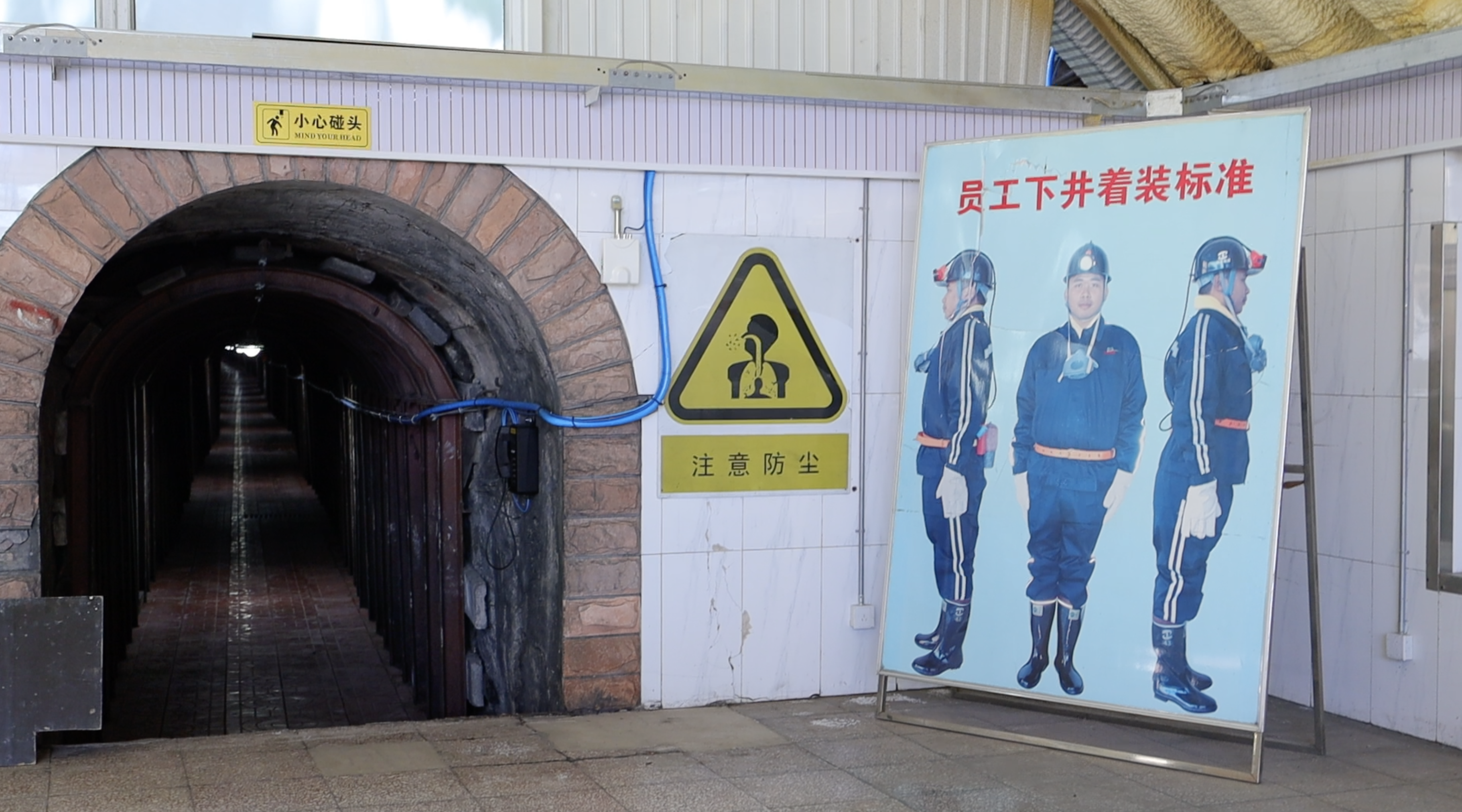 A poster at the entrance of the coal mine that shows mining safety and protective clothing. /CGTN

A poster at the entrance of the coal mine that shows mining safety and protective clothing. /CGTN

Before it was made into a national strategy, China's green push was already being felt in Mentougou. According to Tan Yunliang, who served as technical adviser at Datai for over 33 years, the proposal to close coal mines in the district first emerged in 2014, as Beijing vowed to phase out all its coal-fired power generation capacity.

In 2016, it was decided that the Datai coal mine would be closed. Those who wanted to stay in the industry could apply to transfer to coal mines in other cities. Workers who didn't want to leave Beijing received a severance fee from the company and moved on.

"Very few wanted to leave because we all had a strong emotional attachment to the mine," Wang told CGTN. "The mine saw us grow from young men who knew nothing about the world to people with a huge sense of responsibility."

Not wanting to leave his family behind, Wang took a test that saw him admitted into Jingxi Forest Farm, a national forest farm that was built in the vicinity of Datai coal mine. He became a forester. 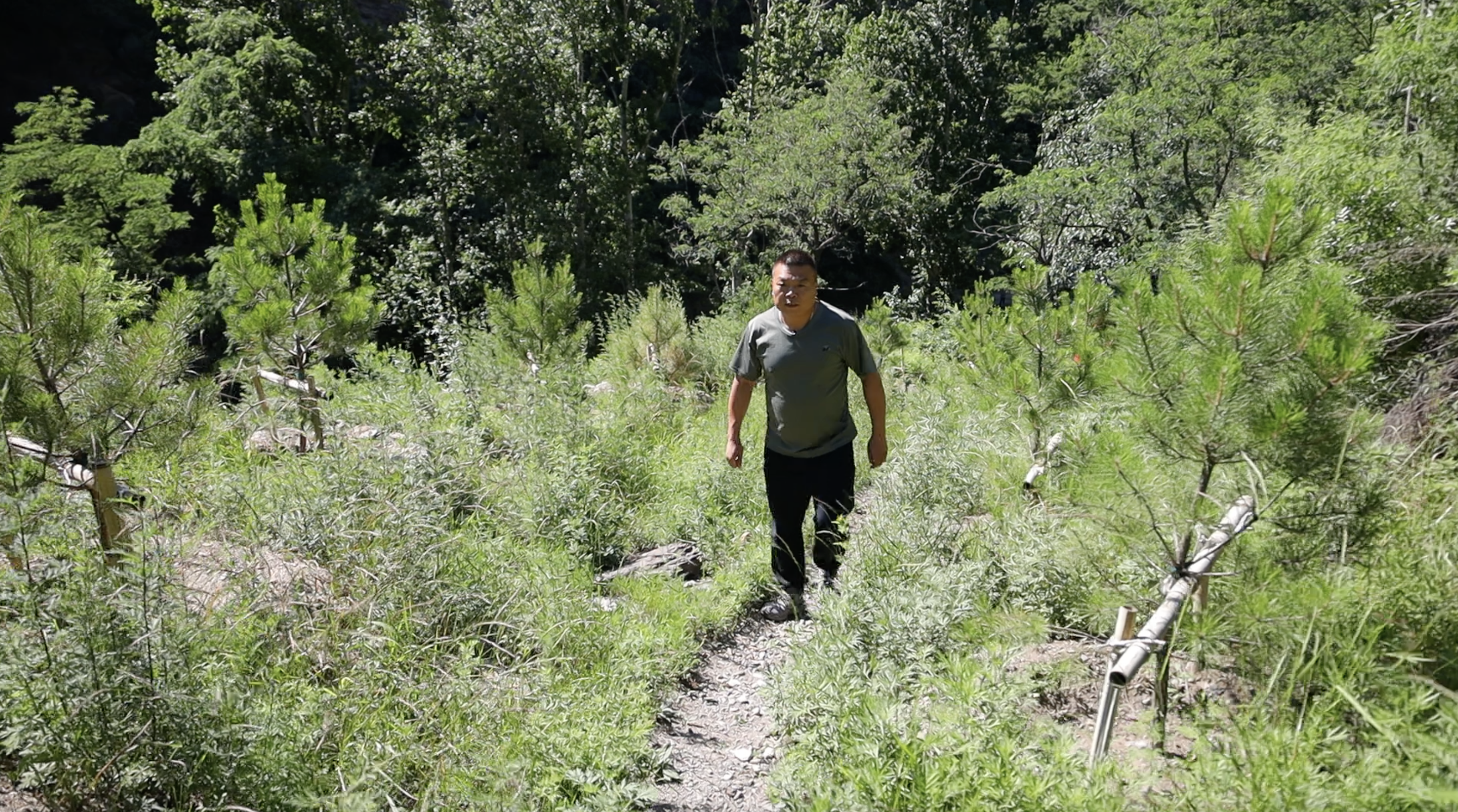 As part of the emission reduction efforts, more than 270 coal mines in Mentougou were shut down, and the district was designated as an ecological protection area. From 2016 to 2020, coal productivity in Beijing declined by six million tonnes, due to the closure of coal mines. In the areas where abandoned coal mines were situated, the local government invested in ecological recovery projects to improve the conservation of water and ecosystems.

Jingxi Forest Farm, which occupies 29,652 acres and accounts for one fifth of the total forest farm area in the capital, was expected to become an ecological defense and green shelter zone for Beijing.

Wang was among the first cohort of foresters at Jingxi Forest Farm. And with him, 20 others made the switch from mine to forest. Half of the employees now at the farm came from Datai coal mine, after it was officially closed in 2019.

The clearing of trees, plants and topsoil from mining areas have resulted in soil erosion, increased the likelihood of flooding and stirred up dust pollution. In 2017, the forest coverage in the area stood at a mere 29.7 percent, much lower than the city-wide average of 42.3 percent, according to Zhu. 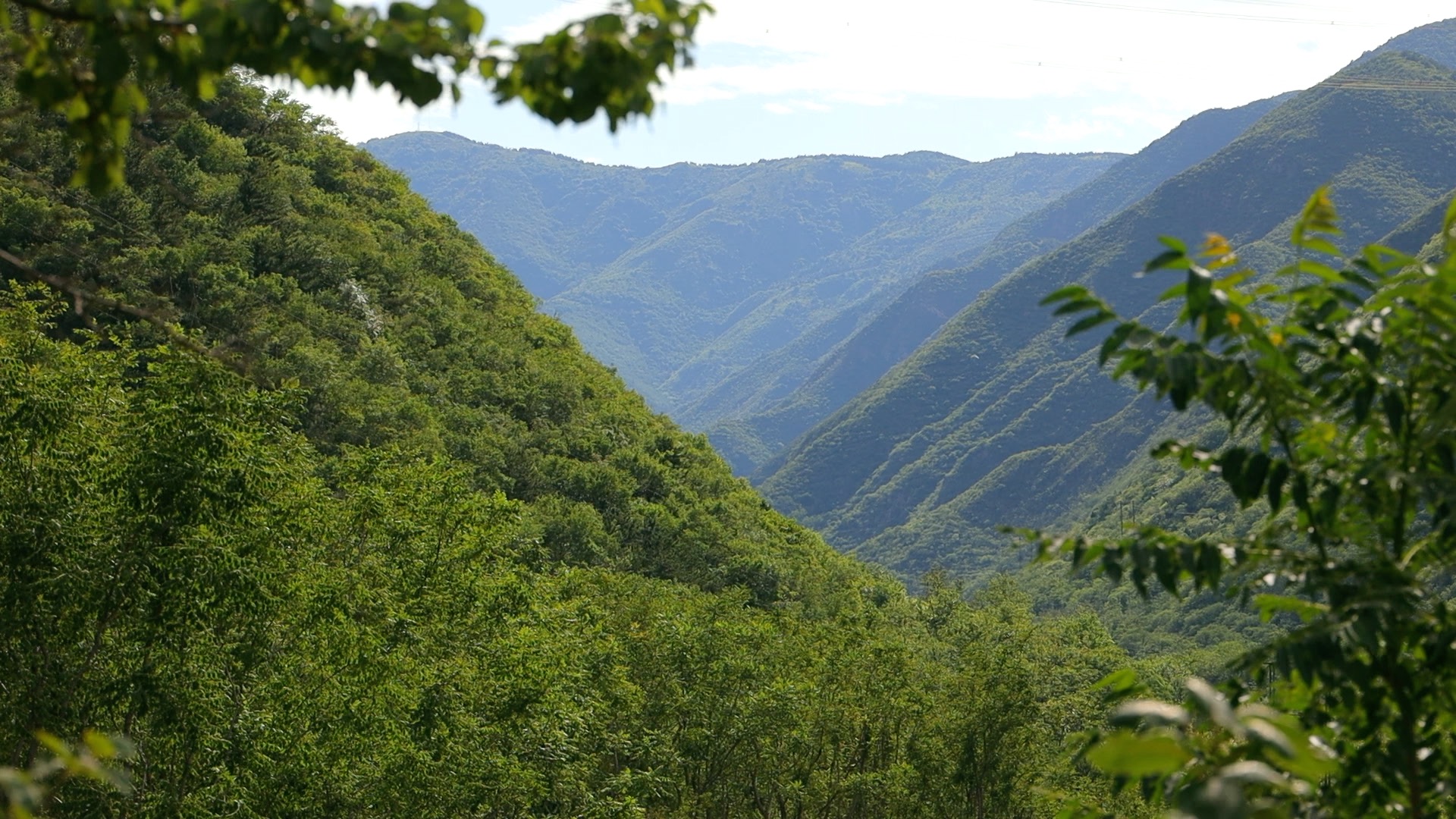 On top of that, decades of coal mining has brought a high risk of land subsidence, cautioned Tan. And in rainy seasons, that might trigger ground collapses. Thus, most ecological rehabilitation for mining areas in Jingxi Forest Farm are now focused on reforestation, since some vegetation can hold soil to prevent soil erosion and reduce the risk of flooding, said Tan.

In four years, the foresters planted trees on 7,413 acres of land. There are now plans to turn the forest farm into an eco park.

Though reforestation is helpful to prevent erosion, greater attention should be paid to restoring the degraded ecosystem based on evaluation of the local conditions, said Zhang Yu, researcher at Green Mining United Institute, a research institute on mining and green growth.

The damaged ecosystem may already find balance on its own, so unnecessary human activity may create further damage to the ecosystem. "We should not pursue reforestation just for the sake of going green," he noted.

In the longer term, turning the forest farm into an eco park would give a second life to the now abandoned mine area, said Tan.

"This is about revitalization and reuse of abandoned mine land."