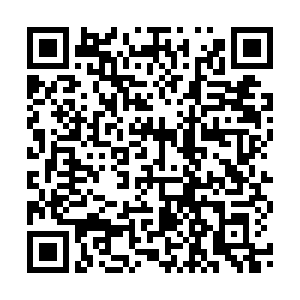 When Zhang Qinwen was rushed to an ICU three years ago, she was 28 kilograms. Outside the emergency room, doctors notified her parents that she had several life-threatening conditions, including multiple organ failure.

Zhang, now 24, began paying attention to her body size in junior high school and started skipping dinner during the final year of senior high. At 50 kilograms, the 162cm-tall girl was already at the lower end of the normal weight band. At university, she took things up a notch.

"At the time, I thought my legs weren't thin enough," she told CGTN. So she put herself on a rigorous eating and workout schedule: No less than three hours of exercise and no more than 800 calories a day.

"Once I started going on a diet, I lost control," Zhang recalled, sitting on the sofa at her home in Shanghai. "It's an obsession."

When her weight dropped to 40kg, she escalated the management of her weight: The food portions gradually became smaller; she even gave up on the coarse grains she would eat when she first started exercising, eventually avoiding carbs and meats altogether. She would hesitate to eat an apple during the worst moments of her struggle, because she strictly kept her daily intake of calories under 500 or 800, far below the recommended intake of 2,000 calories for women.

'I felt so close to death'

"She always hid calorie-rich food during meals, behind her back or in her pockets," Zhang's mother said. Her mental health also suffered. "In the meantime, I was diagnosed with bipolar disorder, easily getting moody, grumpy, and frustrated," Zhang told CGTN.

Apart from her debilitating mental and physical health, her social life also took a hit. "In inhibiting my appetite, I had to avoid going out with friends to dinner. I was just isolated."

But the young girl continued to push herself to the limit. "I felt so close to death, so I asked my parents to take me to hospital."

She stayed in the ICU for four months. There, she felt that the IV fluids injected into her body were rendering her previous efforts to stay slim useless.

"Every drip of protein intake felt like a bite of cake… There were two voices inside me – one urging me to eat in order to survive, while the other kept reminding me not to eat." 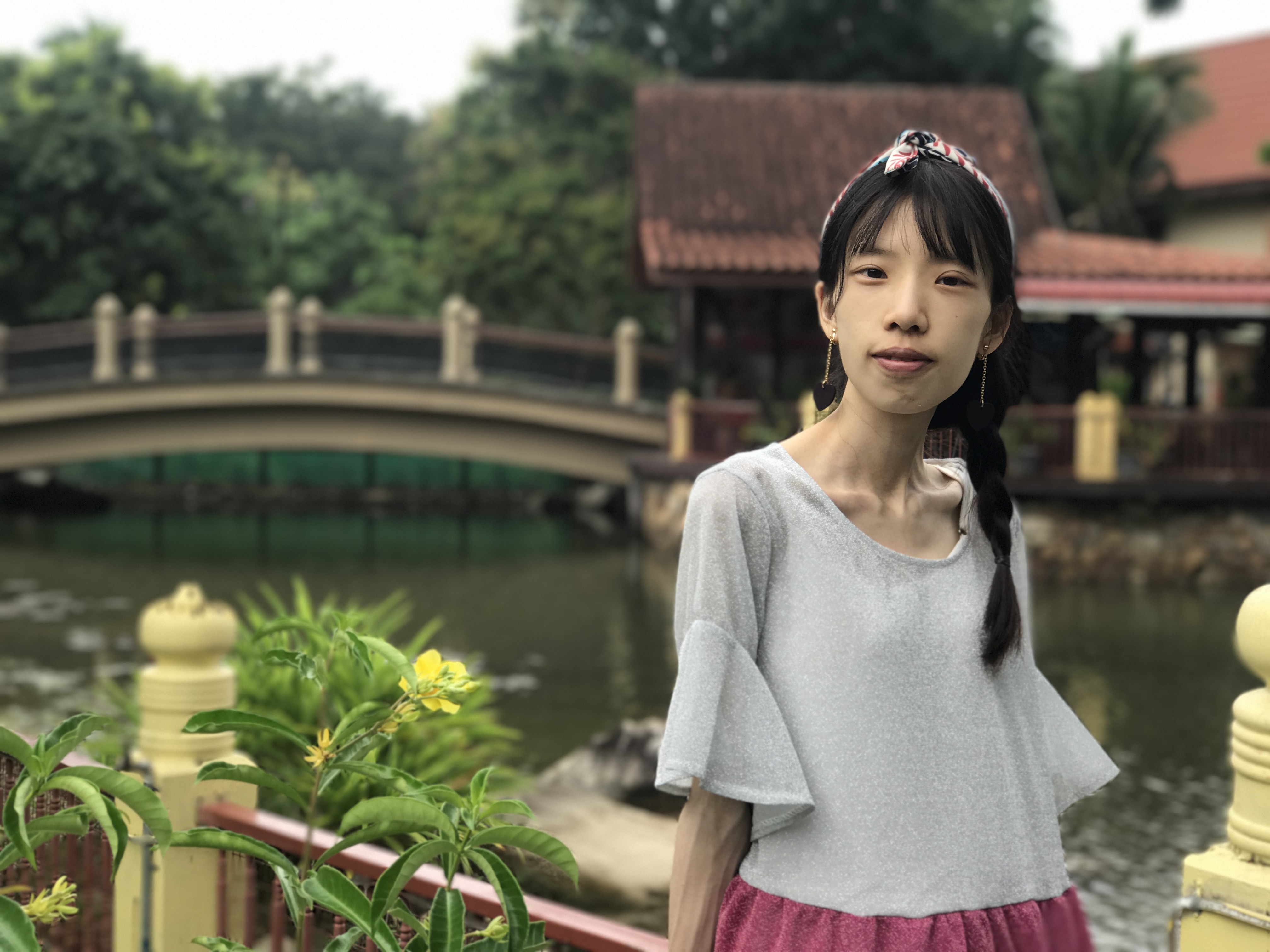 Zhang Qinwen pictured in a park years ago. /Courtesy of Zhang

Zhang Qinwen pictured in a park years ago. /Courtesy of Zhang

Zhang was discharged from hospital after she had put on some weight. That, however, was far from the end of the story. A bottle of milk and two biscuits – the only extra meal her parents imposed on her every afternoon – made Zhang anxious. She would cup the biscuit in her trembling hands, nibbling on it until it was gone, all while tears rolled down her face.

As she improved, her parents eventually felt relieved enough to let her study abroad, unaware of another unfolding tragedy. "It was an exchange program at her university. Back then, her father and I thought it might be good for her to live in a new environment," Zhang's mother said.

Under immense academic stress and after years of restriction, Zhang fell into binge eating.

"I ate a lot. My roommate thought I was a thief because I'd eat everything in the fridge or the garbage, even raw meat, frozen pizza and cat food. I just couldn't help it," she recalled. Her roommates took pictures of her pilfering food and uploaded them online.

Humiliated, Zhang could no longer continue with her studies. She chose to drop out and return to Shanghai.

You make of your body your very own kingdom where you are the tyrant, the absolute dictator.
-  Hilde Bruch, a German-American psychiatrist revered for her contribution to the study of eating disorders

Anorexia nervosa is a psychological disorder that saw a rising incidence rate in the 1950s in the West. People with anorexia, like Zhang, are constantly worried about their weight and try to shed as much of it as possible. The condition is often accompanied by other mental problems, notably depression, bipolar disorder and obsessive-compulsive disorder.

"During those years, smiling was too difficult for me," Zhang mused.

Anorexia can be treated, but complete recovery remains elusive for many. It's a condition that a lot of sufferers struggle with for years or even their entire life. It's also the most lethal mental illness, with an estimated death rate of 10 percent.

A Global Burden of Disease report published in The Lancet in 2019 estimated there were 13.6 million anorexia or bulimia cases worldwide and 41.9 million cases of binge eating and other eating disorders.

Women and girls are affected disproportionately. Over 90 percent of those who develop eating disorders are women, and it's estimated that anorexia affects one in 200 women. According to the U.S. National Association of Anorexia Nervosa and Associated Disorders, at least one person dies from an eating disorder every 62 minutes. 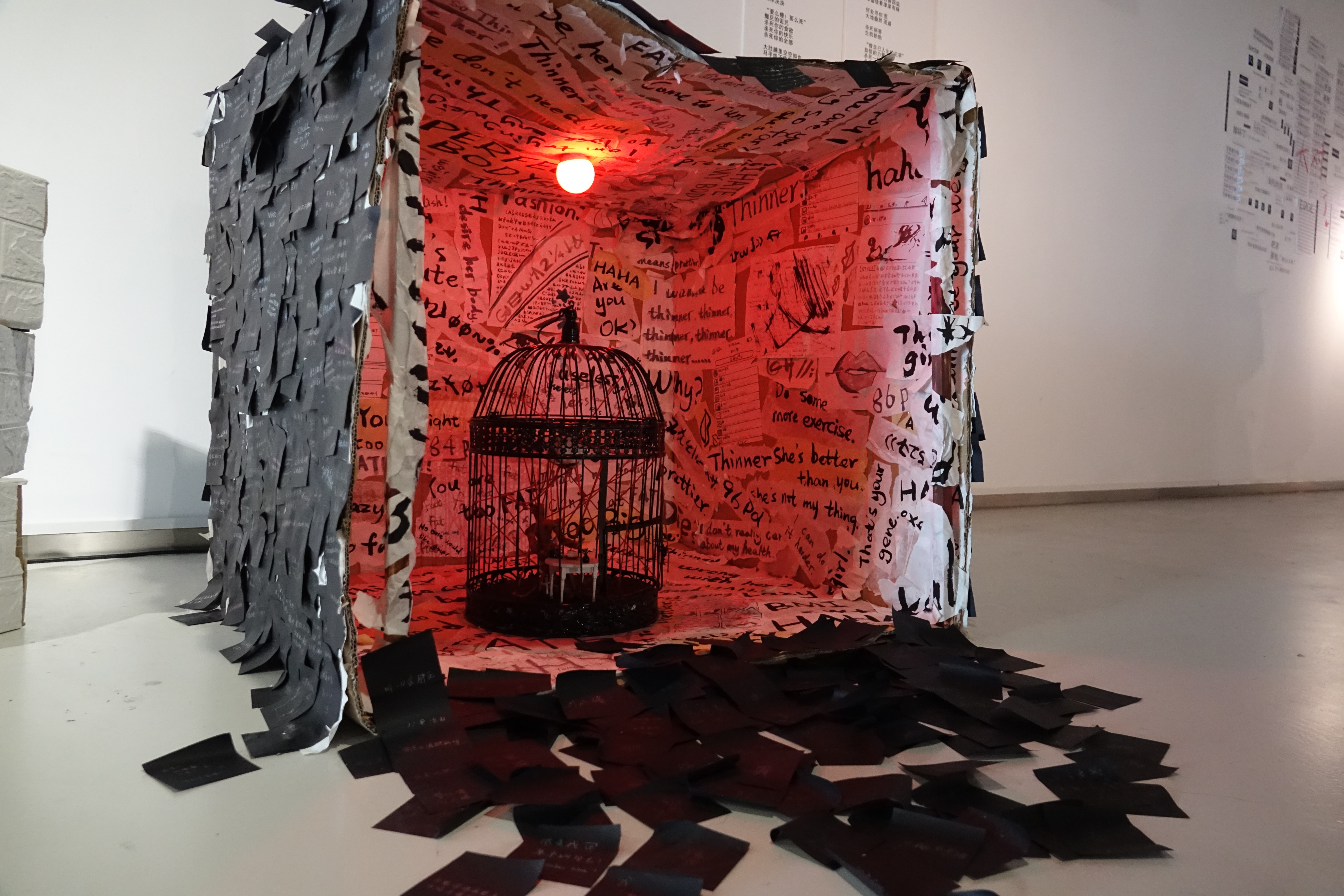 A cage with a puppet girl inside, restrained by strings of red. It's an item on display at China's first exhibition on eating disorders (ED) in Shanghai. /CGTN

A cage with a puppet girl inside, restrained by strings of red. It's an item on display at China's first exhibition on eating disorders (ED) in Shanghai. /CGTN

In China, detailed data related to eating disorders (ED) is hard to come by. Many wouldn't say that they developed an eating disorder because of the shame or embarrassment attached to it. But the country, amid fast socio-economic development, is seeing a dramatic increase in related hospital visits and diagnosis.

According to statistics released by the Shanghai Mental Health Center (SMHC) – one of the country's only two public hospitals that have an ED treatment center – the number of ED patients increased five-fold over the past decade, among whom 95 percent are women. According to Chen Jue, clinical psychology director of the center who is also Zhang's primary psychiatrist, teenage girls in urban centers are a growing cohort of ED patients.

To be more specific, ED outpatients in the SMHC grew from eight in 2002 to about 3,000 last year, while those hospitalized went up from one to 218 over the same period.

Li Xueni, director of the ED treatment center at Peking University Sixth Hospital, said the number of ED patients stayed in the single digits annually throughout the 1990s but quickly surged going into the 21st century.

This rise could be due to multiple factors. ED could stem from self-denial and the relentless pursuit of perfection.

But it's more due to social pressure from modern mainstream culture that associates thinness with beauty. Public opinion tends to equate "fat" with such terms as "ugly," "lack of self-discipline," and "loser."

"In no case is this more strikingly true than in that of anorexia nervosa and bulimia, barely known a century ago, yet reaching epidemic proportions today," wrote Susan Bordo, an American philosopher engaged in contemporary cultural studies. 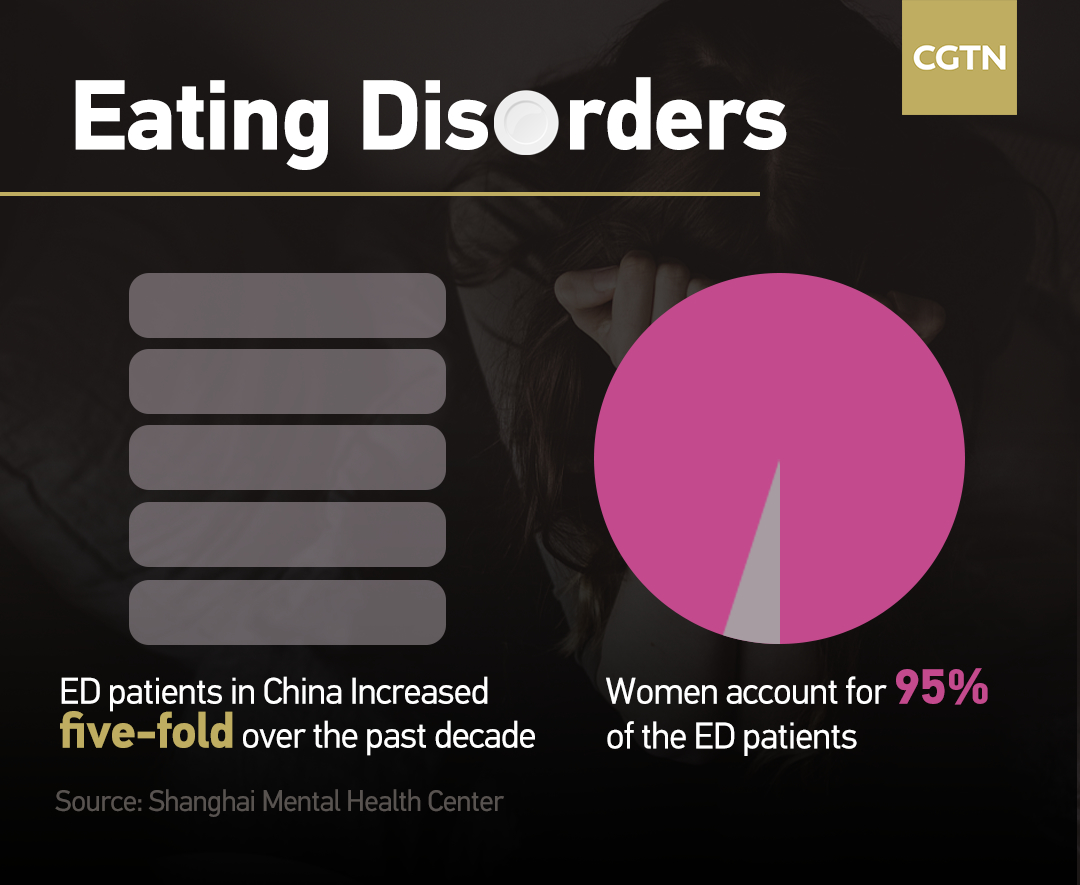 "It was the color of sandstorm," Zhang said of those hard times. "I often felt like I was useless, and it was wrong for me to live and also to die." She spent the final years of puberty struggling to satisfy herself with a "perfect" body, at the risk of losing her life.

After a lengthy treatment, Zhang began to recover. Last year, she decided to channel her painful experience into helping those with eating disorders, using what she's gone through to build a community of professional psychiatrists, volunteers and former patients. "Most of the girls with anorexia or bulimia would feel lonely since there's a lack of recognition and understanding of this mental illness. I hope they can feel that they aren't alone on the path to recovery," she noted.

The Weibo social media group that Zhang set up now has over 1,400 patients with eating disorders. They give each other advice when it comes to nutrition, psychology, and related health issues as well as understanding and encouragement. 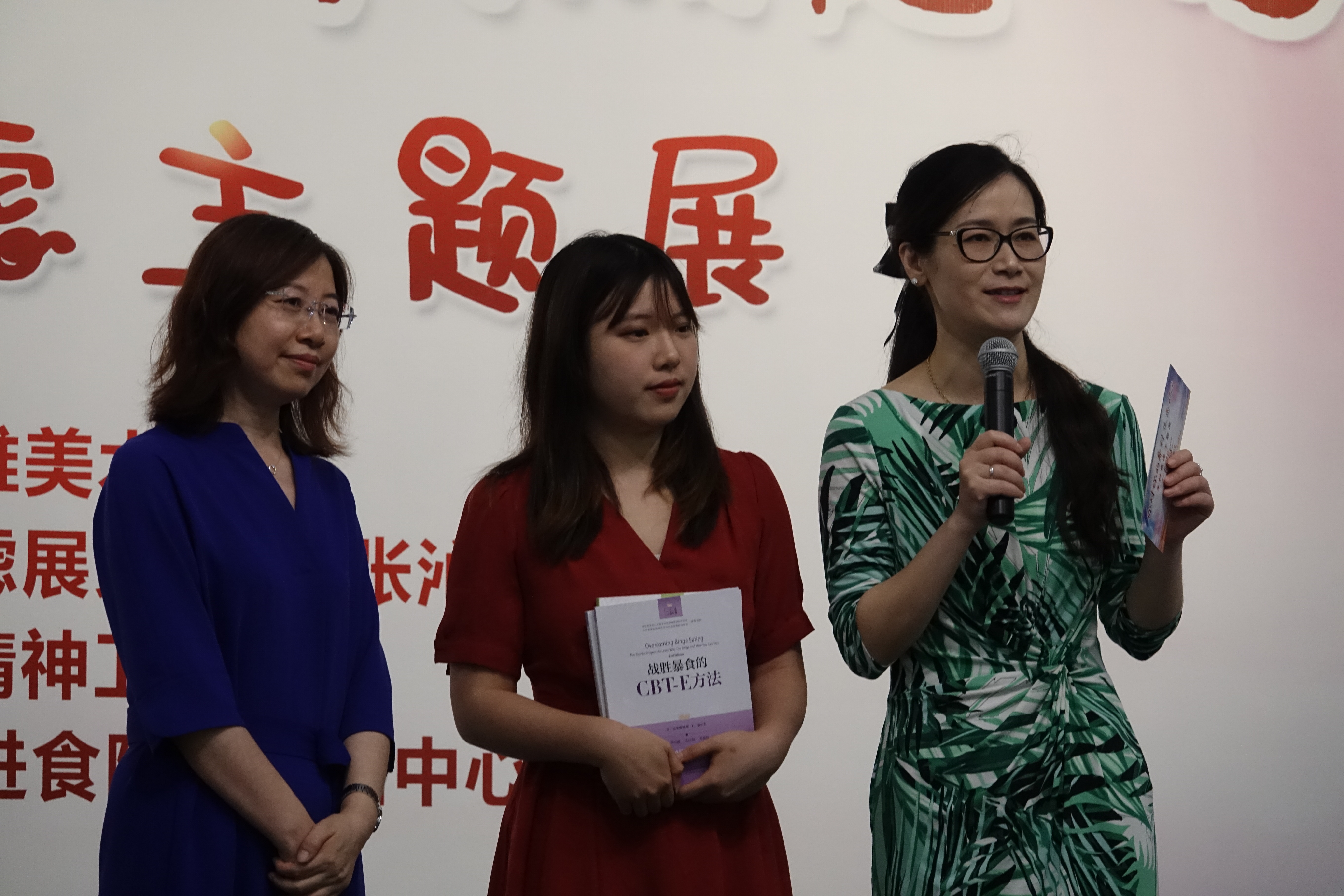 Zhang Qinwen (C), Chen Jue (L) and Qiao Ying (R), both from the SMHC, announce the launch of China's first ED hotline at the exhibition in Shanghai, China, June 30, 2021. /Courtesy of Zhang

Zhang Qinwen (C), Chen Jue (L) and Qiao Ying (R), both from the SMHC, announce the launch of China's first ED hotline at the exhibition in Shanghai, China, June 30, 2021. /Courtesy of Zhang

Every day Zhang receives many messages asking for her help. Reading them gives her pain because she can strongly empathize with what these girls are going through. "I need a while to digest everything they've told me about their feelings."

Despite the gloom this brings, she still created a small charity organization called "ED Healer" consisting of nine volunteers, and managed to launch an exhibition on ED and its treatment – the first of its kind in China.

"It was very frustrating at first. We're not exhibition professionals, so it was very tiring," she said. Zhang had to confirm the date and venue many times, rejected by those who couldn't understand the value of holding an exhibition on body image issues.

She wanted to give up a couple of times. The most recent episode was the opening day, she said during an interview that night. "We are shorthanded, and many minor details weren't executed well."

Zhang quit her job a month before the opening because it required her complete devotion. But she feels it's worthwhile. During the exhibition, she met with many ED patients who wanted to get better and talked with them while walking around the exhibits.

Last week, the SMHC launched China's first hotline on eating disorders at the exhibition. The "Wise Eating, Wise Caring" hotline started providing free counseling to people seeking help with eating problems on July 3. Zhang sees this as a step in the right direction on a national level and a platform that shares the responsibilities she's shouldered alone for years.

"This hotline shows that my efforts to bring greater awareness to eating disorders haven't been in vain," she said.

Over the years, she's been trying to reconcile with the "girl" in her heart. "I still can't love myself every minute. But I've learnt to respect and protect my body."

If you have a story on eating disorders and want to share it with us, please write to us at stories@cgtn.com.

Also, if you or someone you know is suffering from an eating disorder, please call the"Wise Eating, Wise Caring" hotline (China only): 4009001112.