Download
Reporter's diary: My first three days in Urumqi – too much naan!
By Wei Lynn Tang 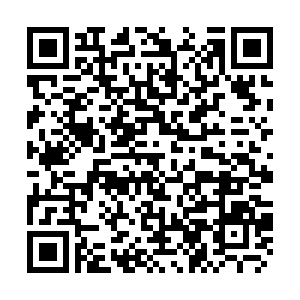 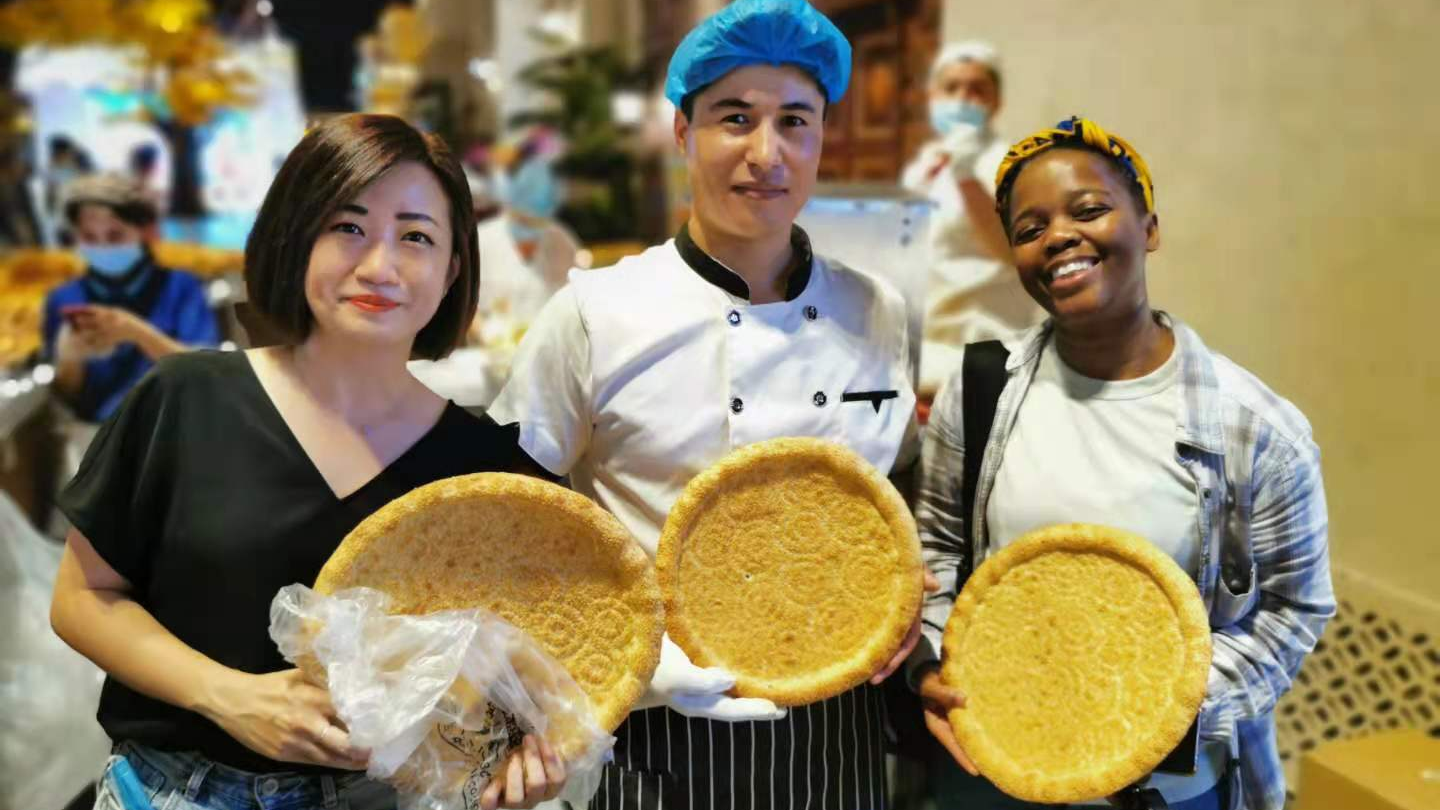 Reporters take a photo with a naan-maker on a trip to Xinjiang. /CGTN

Reporters take a photo with a naan-maker on a trip to Xinjiang. /CGTN

It's my first time here in northwest China's Xinjiang Uygur Autonomous Region and into day three, I've already had too much naan!

Those who know of and love Indian food will be familiar with naan. In Xinjiang, it's known as "Nang" – a baked flat bread that's such a necessity for locals that there's a saying: "We'd rather go a day without meat than a day without naan." I checked with a few locals to see if it's true, and it is. There are plenty of seasoned naans to choose from. I like mine salty rather than sweet (i.e. rose-flavored).

I also tried making – well maybe "making" is pushing it – naan, but I did attempt to roll and punch down the dough made of mostly wheat flour. My somewhat dilapidated-shaped naan was then roasted in a special oven made of mud and earth. Naans are sold for five yuan each (less than $1).

We explored a whole lot of naan culture at the Nang Cultural Industrial Park in Urumqi, and continued to have more at the Xinjiang International Grand Bazaar – said to be the world's largest bazaar (in size). 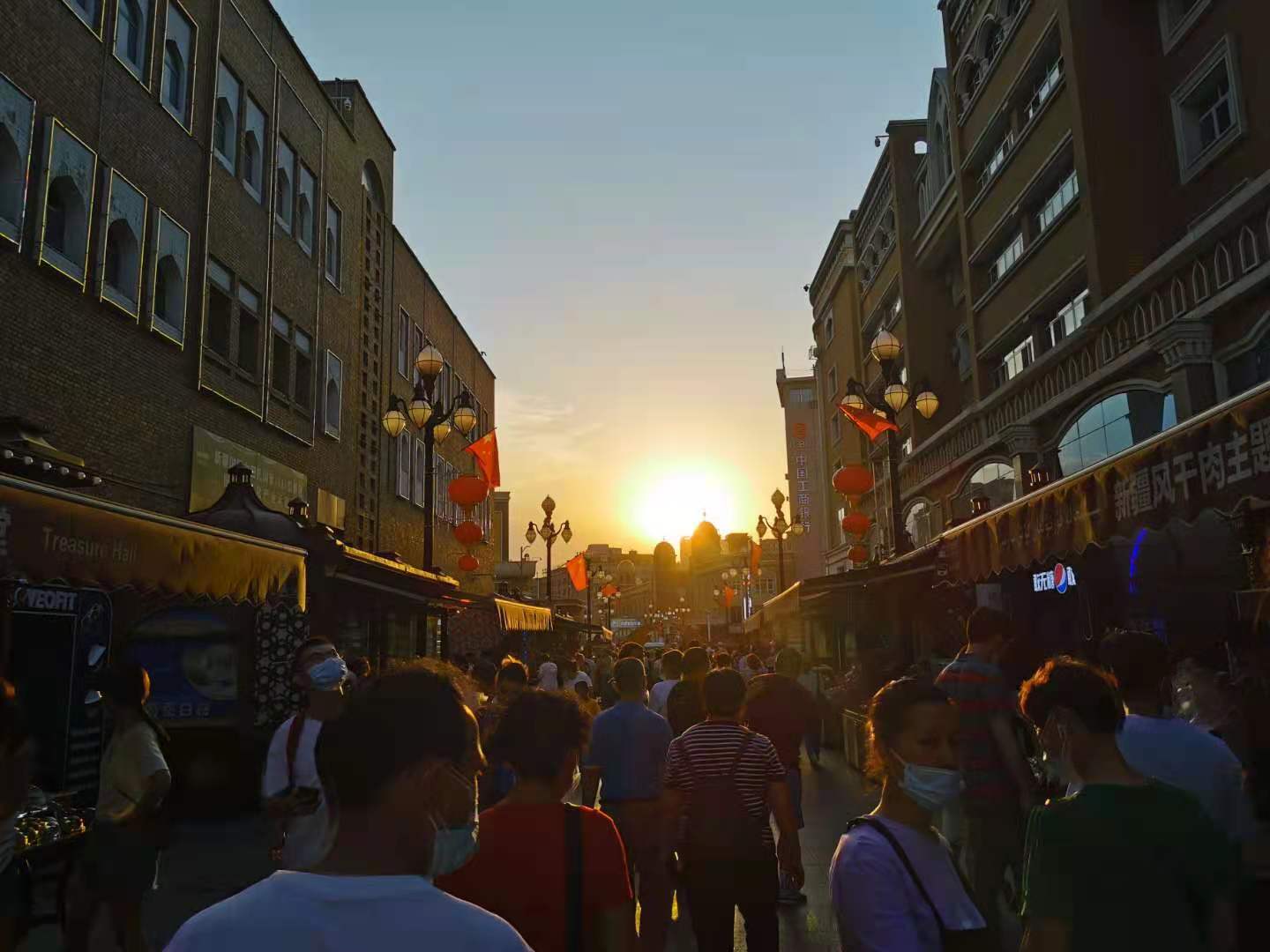 I got talking to my guide at the bazaar, and I felt happy for her. Her name's Dilinara of the Uygur ethnic group, 28, and just got married in November to her childhood sweetheart. She told me she wants to have two children in the future – preferably of the same sex as it's easier for them to get along with one another. Dilinara was previously a kindergarten teacher but has since taken exams to be a civil employee.

We have spent three days in Urumqi, the capital of Xinjiang, thus far.

What struck me is that this city is very much influenced not only by the Han and Uygur ethnic groups – though of course they make up the majority – but also that of Hui, as well as Kazakhs and other ethnic groups.

Our guide at the Red Hill, Hong Shan Park, Ashley, is of the Hui ethnic group and she spoke good English. The Uygurs speak their own language but for the Hui people, Mandarin is mostly their first language. I asked her if it's necessary for her to marry someone from the same ethnic group. She said it's not necessary, but it was her own choice to do so. 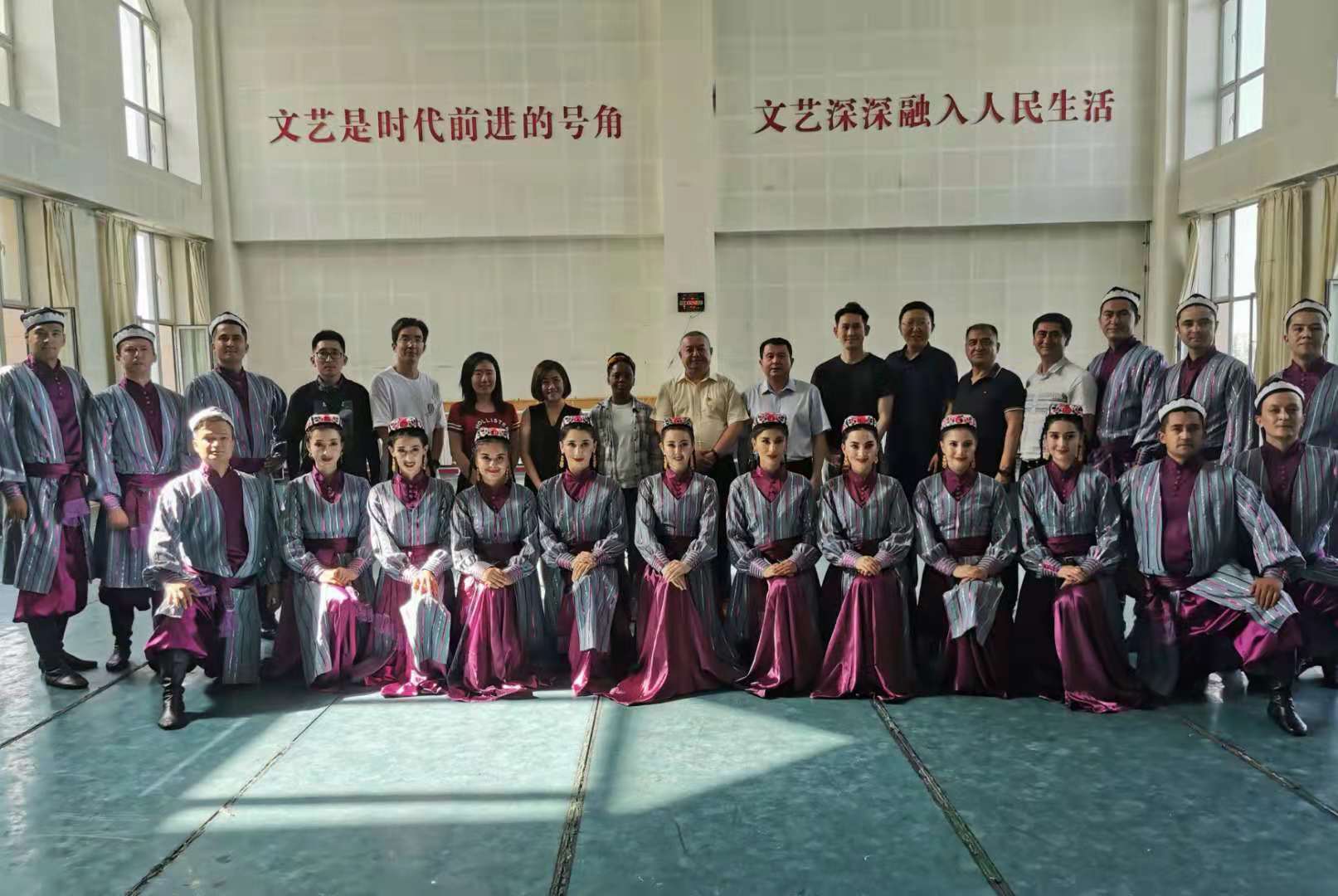 A soulful performance by the Xinjiang Muqam Art Troupe. /CGTN

A soulful performance by the Xinjiang Muqam Art Troupe. /CGTN

At the Xinjiang Muqam Art Troupe Theatre, I was wooed by the Muqam repertoire – a composite of songs, dances and folk music that's traditional to the Uygur culture – performed by the talented team. It was so soulful.

Dilshat Parhat, head of the troupe, said: "We have to 'go out,' to bring our performances to other parts of China and allow more people to know of our cultural heritage. We are also considering bringing this as a course into top Chinese universities."

Of all the performances, I enjoyed the Kazakhstan dance performance titled "Round Moon" best.

But perhaps the icing on the cake so far for me was catching a horse-riding performance at the Xinjiang Ancient Ecological Park of Yema Group.

Some of the horses were that of "Akhal-Teke," a breed from Turkmenistan; while the riders were mostly local Kazakhs. 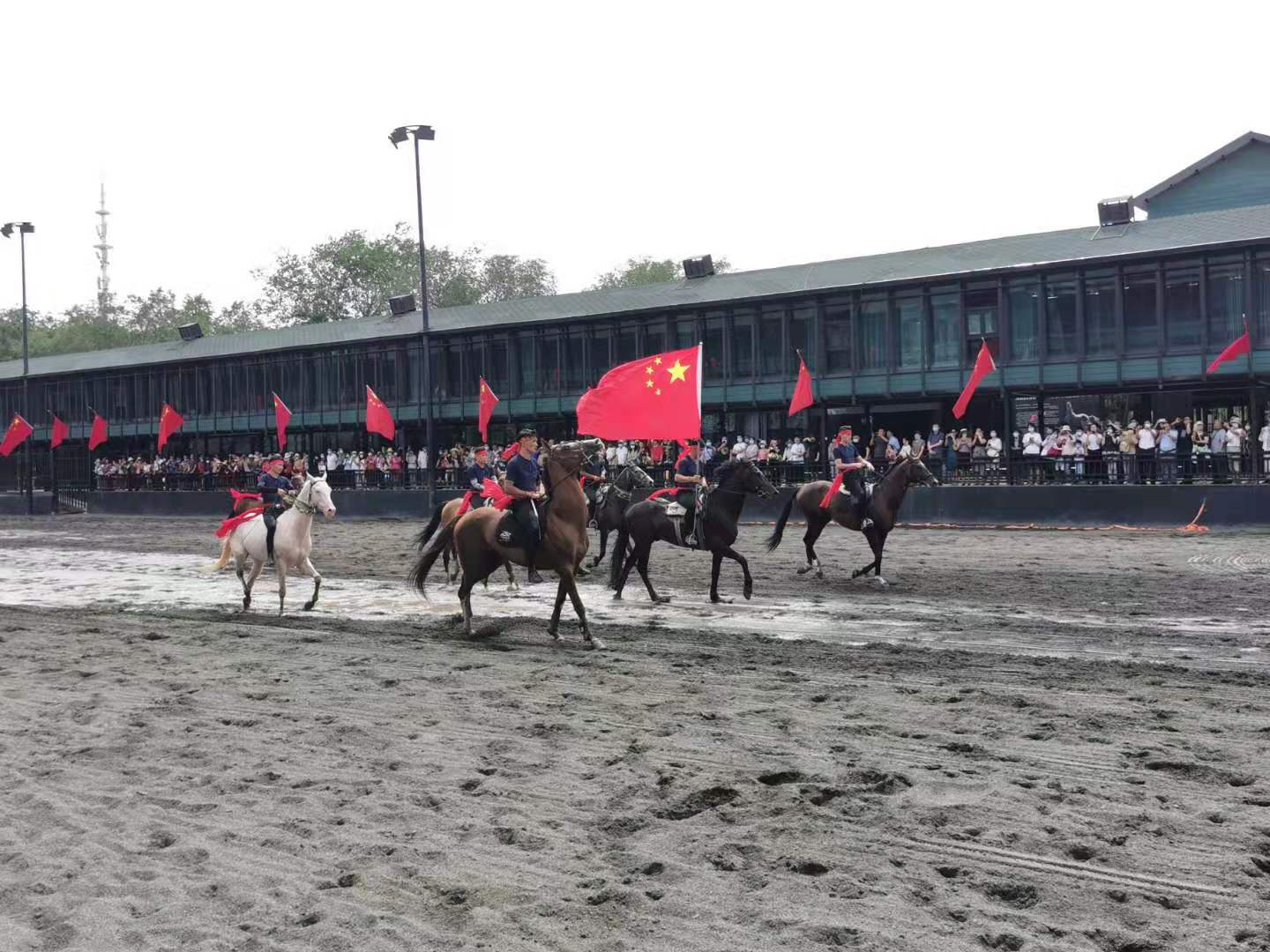 I picked up a couple of new and interesting pieces of information about these horses!

For example, I was told by Tu Nu Ke, head of operations at the park, these horses can hit 4,300 kilometers in just 84 days, and gallop as fast as one kilometer in 67 seconds!

At 50 degrees, the horses apparently only need to consume water once a day. And they only need to sleep for three to four hours a day – standing. They each weigh over a tonne. He said the average lifespan of the horses is 30 years old.

In the past three days, we visited various museums, Qifang Creative Street where I was fascinated by carvings on natural stones specifically; and at the Xinjiang Software Park, I bought myself a pair of earrings made of clay and raisins. It was love at first sight for me. 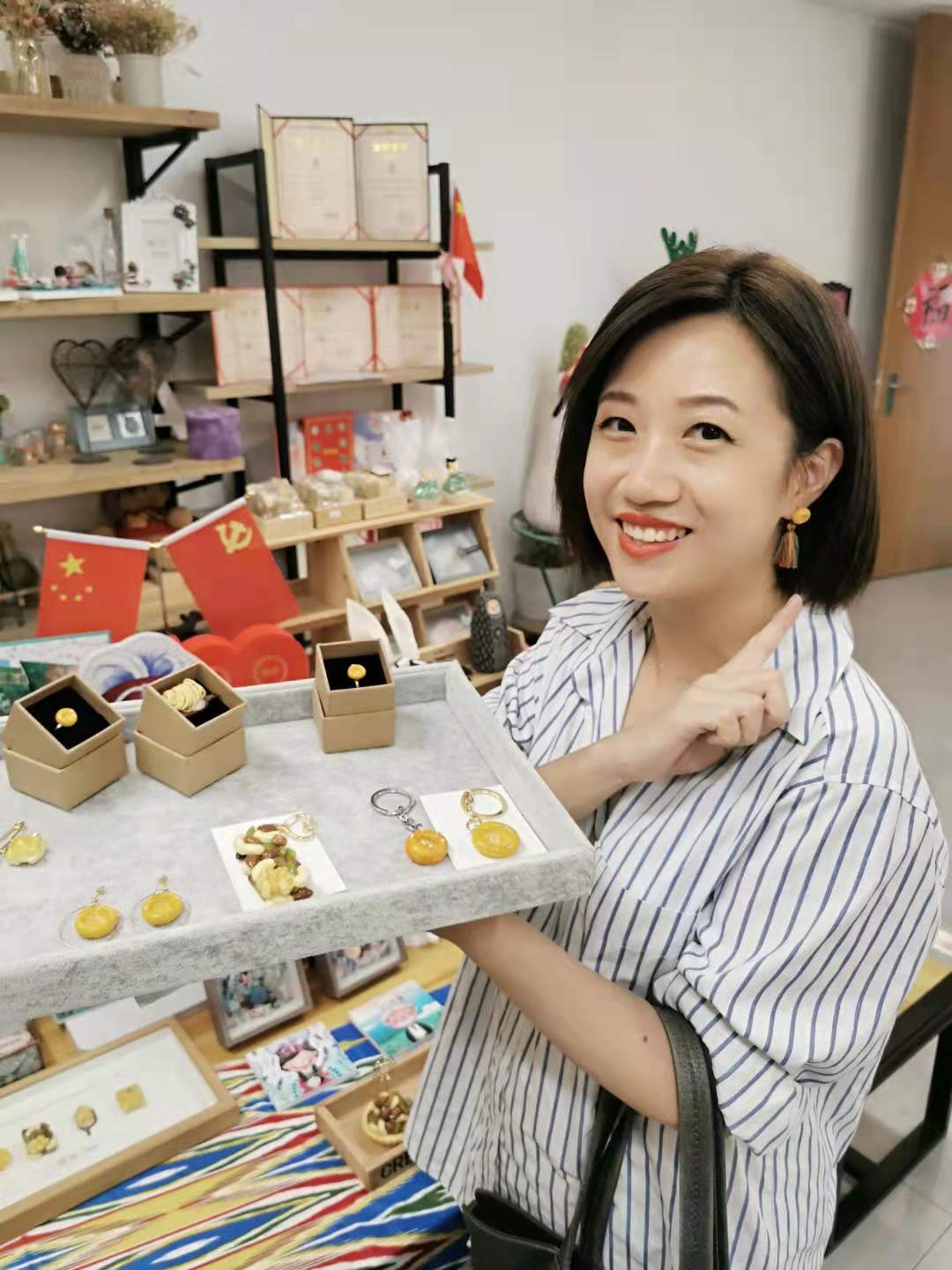 I bought myself a pair of earrings – said to be made of clay and raisins – at the Xinjiang Software Park in Urumqi. Wei Lynn Tang/CGTN

I bought myself a pair of earrings – said to be made of clay and raisins – at the Xinjiang Software Park in Urumqi. Wei Lynn Tang/CGTN

Wang Lin, who manages a cat art studio at the Xinjiang Software Park, told me her business has flourished since moving into the park in 2018.

Besides having her office rent-free, she benefited most from professional support gained from the park in many areas, including intellectual property training and being able to travel around the country to gain insights. Her company links signed artists to make theme-based decorative products, and one of her artists said her thinking has since broadened, having had the exposure to showcase her work to a wider market.

And as I started this post with naan, I thought it'd be apt if I ended it with food too.

The best kebab – grilled lamb skewers, with spices, cumin and salt sprinkled on them – I've had so far in my life was here in Xinjiang.

I am looking forward to seeping in more of this region and its rich culture in the next few days.