Download
Happy 50th anniversary: What China and the UN can achieve together
Siddharth Chatterjee 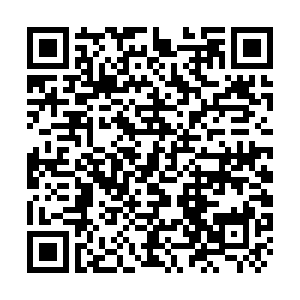 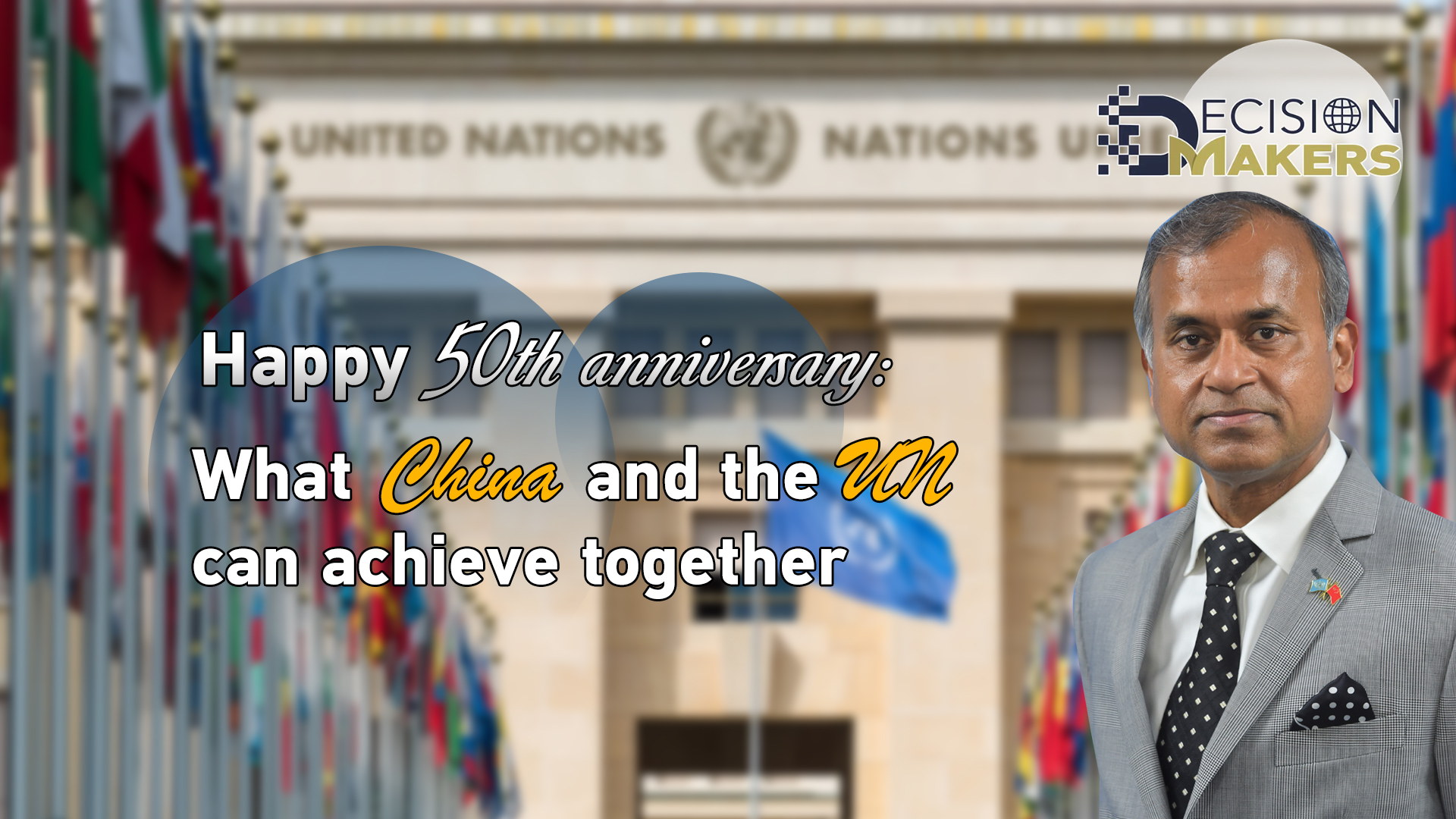 Editor's note: Decision Makers is a global platform for decision makers to share their insights on events shaping today's world. Siddharth Chatterjee is Resident Coordinator of the United Nations in China. The article reflects the author's opinions and not necessarily the views of CGTN.

China was one of the architects of the United Nations and was the first signatory of the UN Charter in San Francisco in 1945.

But it was only in October 1971, with the Chinese delegation led by Mr. Qiao Guanhua, that China's representation at the UN resumed. Since that time, the UN has had the great privilege of witnessing and supporting China in achieving one of the greatest periods of socio-economic progress in world history.

Now, on the 50th anniversary of China in the UN, I am honored to serve as the UN Resident Coordinator, a post I took earlier this year.

While I am a recent arrival to China, only just beginning to understand its rich tapestry of over 5,000 years of civilization, the UN in China has had the privilege to shape and witness the profound economic and social transformations that have occurred since reform and opening-up.

As we commemorate a half-century of cooperation, a question naturally emerges: Which way now for the UN and China?

This is a weighty question, as China and the world are at a critical juncture. Tentatively emerging from the COVID-19 pandemic, but with many countries still struggling terribly. Staring down the threats of climate change, with record-setting heat, fires, storms, and other disasters. Counting down the years in this "Decade of Action" to achieve the Sustainable Development Goals.

China's standard-setting leadership in past decades gives me confidence that we can achieve even greater things in the years to come.

In 1978, Deng Xiaoping's reform and opening-up policy began to transform the nation, as evidenced, for example, in Shenzhen, which changed from a fishing village on the Pearl River Delta into an international hub for research and innovation in a single generation.

And in 1979, China chose to accept development assistance from the UN, learning from its long experience in poverty alleviation and industrial and agricultural growth.

China's success in the more than 40 years since then has been nothing short of miraculous. During this time, China: Lifted over 750 million people out of absolute poverty; Invested in public health and education, investing in human capital thus making possible a happier and healthier workforce that contributed to economic productivity; Became the world's manufacturing centre, based on a growth model of foreign investments, resource-intensive manufacturing, cheap labour, and exports; Multiplied its per capita GDP from $180 in 1979 to an incredible $12,000 today.

The signs of this progress are evident not just in statistics, but in daily quality-of-life matters. Throughout China now lie the classic hallmarks of a market economy, with opulent shops from luxury brands, foreign and domestic.

A far cry from what I saw as a young boy growing up near Chinatown in my native Kolkata, India, though fondly remembered as a warren of alleys, narrow aisles of food markets, elderly men playing board games in parks, with Chinese characters on the signs overhead.

For example, in Beijing during the early 1980s, cabbage was often the only vegetable on menus. With help from the UN's development agency in China, availability at markets expanded - supporting the diversification of domestic vegetables and introducing new ones from abroad, such as broccoli.

This startling success is on track to continue. China's per capita GDP is projected to more than double by 2025, reaching over $25,000, adjusted for purchasing power. The country's surging economy is set to overtake 56 countries in the world's per-capita income rankings during the quarter-century through 2025, the International Monetary Fund projects.

No less an authority than Professor Jeffrey Sachs, a United Nations SDG Advocate and director of the Center for Sustainable Development at Columbia University, has called China an "inspiration" in stopping the pandemic and ending poverty.

This progress is all the more remarkable considering the hit that the pandemic has delivered to the global economy. China's generosity and leadership on this front are commendable. China's Foreign Minister Wang Yi told the 9th World Peace Forum in Beijing "to build a 'Great Wall of Immunity' to battle the COVID-19 pandemic."

Still, challenges remain. As with any economy at this stage of development, the relentless pursuit of high growth is reaching its natural limits, and China faces new economic, social, and environmental challenges. 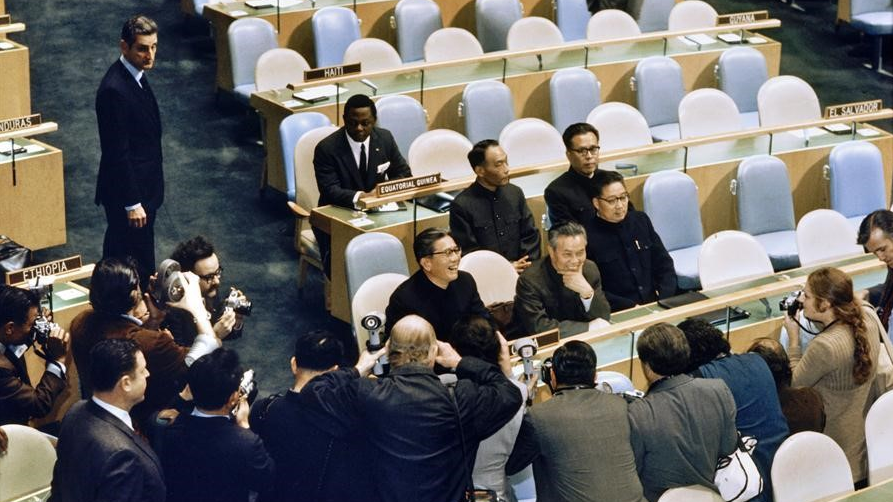 New priorities for agenda 2030 and beyond

The UN Sustainable Development Goals are meant to be achieved by the year 2030, and we are now in what is called "the Decade of Action." I see three areas for close cooperation at this critical juncture.

In a post-Xiaokang society, China needs to embrace innovations and services that drive equitable and inclusive progress, dealing with the legacies of rapid expansion to achieve the Sustainable Development Goals and leave no one behind.

Second, climate change. As a consequence of its large population and economy, China is the world's single largest emitter of carbon dioxide, responsible for a quarter of global emissions. Having recognized the environmental costs of this development model, President Xi Jinping has set a bold ambition for China to hit peak carbon emissions by 2030 and reach carbon neutrality by 2060.

This enormous feat will require a massive transition in how China's economy works and its population lives every day. Seismic shifts in investments and technologies will be needed.

Third, multilateralism. China is a champion for multilateral efforts to address global challenges. China has the will, knowledge, and resources to contribute enormously to the Sustainable Development Goals and position itself as an exceptional member of the community of nations.

Today, China is the second-largest contributor to the UN peacekeeping budget and has sent more peacekeepers to UN missions than any other permanent member of the Security Council. China also played a vital role in shaping the consensus needed for the SDGs and the Paris Agreement.

China and the United Nations

The United Nations family in China is in lockstep with China's vision. The 2030 Agenda and the recently agreed-upon Country Framework are the blueprints for building on the gains of the past.

In this Decade of Action to achieve the SDGs, the UN can support this ambition and convene, connect and catalyze stakeholders in leveraging China's development experience to benefit other countries, especially those in Africa, in the spirit of South-South Cooperation.

As the world deals with the pandemic, the UN Secretary-General António Guterres says, "As we strive to respond and recover, we must re-examine many longstanding assumptions and reconsider the approaches that have led us astray. We must also re-imagine the way nations cooperate. The pandemic has underscored the need for a strengthened and renewed multilateralism."

This October will also be time for the UN and China to celebrate our 50-year relationship. China and the UN will re-imagine, innovate, reinvigorate and continue the hard and daily work and dedicate ourselves anew to  creating lasting prosperity for the people of China and all the world.