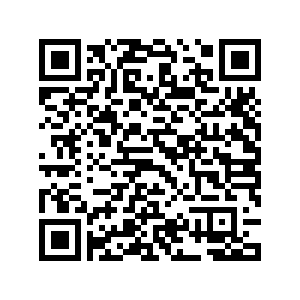 Yes, two days into my first trip to Xinjiang and the little devil is already acting up. And if I were to play the blame game I'd pin it on the fruits I've been consuming.

But I know that there's only one to blame here, and that is me. I just couldn't resist trying all the fresh fruits produced here in China's northwest.

Aksu Prefecture – our first stop – offered a wide variety of fruits, as it is one of the country's major fruit production centers. 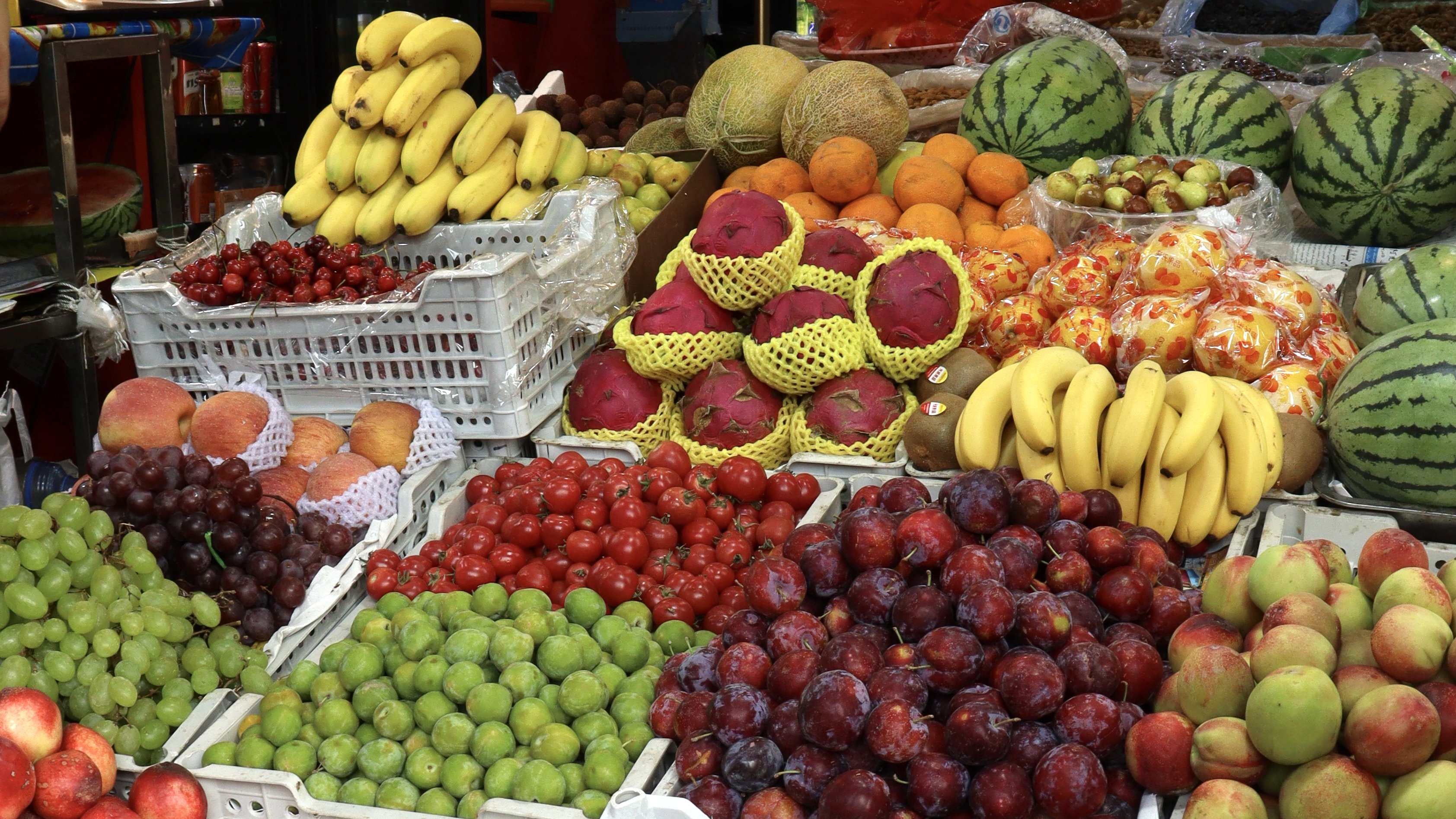 Aksu's fertile soil, long sunlight hours (yes, the sun is up until 9 p.m.), and large temperature differences between day and night all contribute to the accumulation of sugar in fruits, making them sweeter and juicier.

After checking in at Aksu State Guest Hotel, my team and I wandered around.

We saw and tried all sorts. Well, not all of course … just those in season and some that are available all-year round: Hotan jujube, Xinjiang fig, apricot, flat peach, watermelon, the seedless Turpan grape and the famed Hami gua or melon. 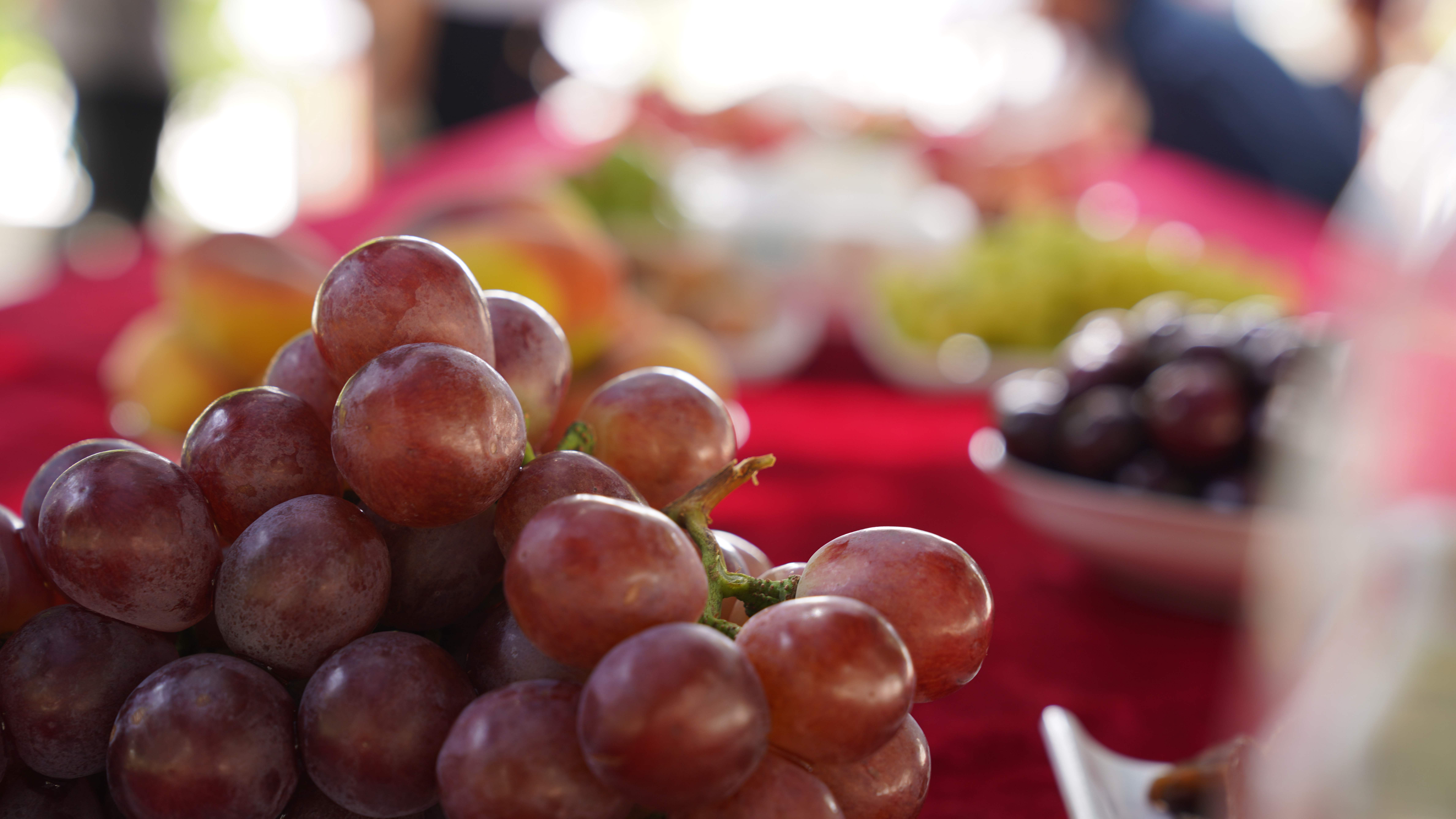 But it's not the variety of fruits that fascinate me, to be honest. It's how much of a melting pot of cultures Xinjiang is.

I've been living in China for over five years now. But it's only now that I've actually seen and experienced a multi-ethnic China.

The region is inhabited by over 50 ethnic groups. From signs in Mandarin and Uygur language to a stretch of food stalls selling Hui and Kazakh dishes: it's fascinating to see them live alongside each other.

There's a certain warmth you feel around them as well. At least with the few interactions I've had with locals – they're all very welcoming. 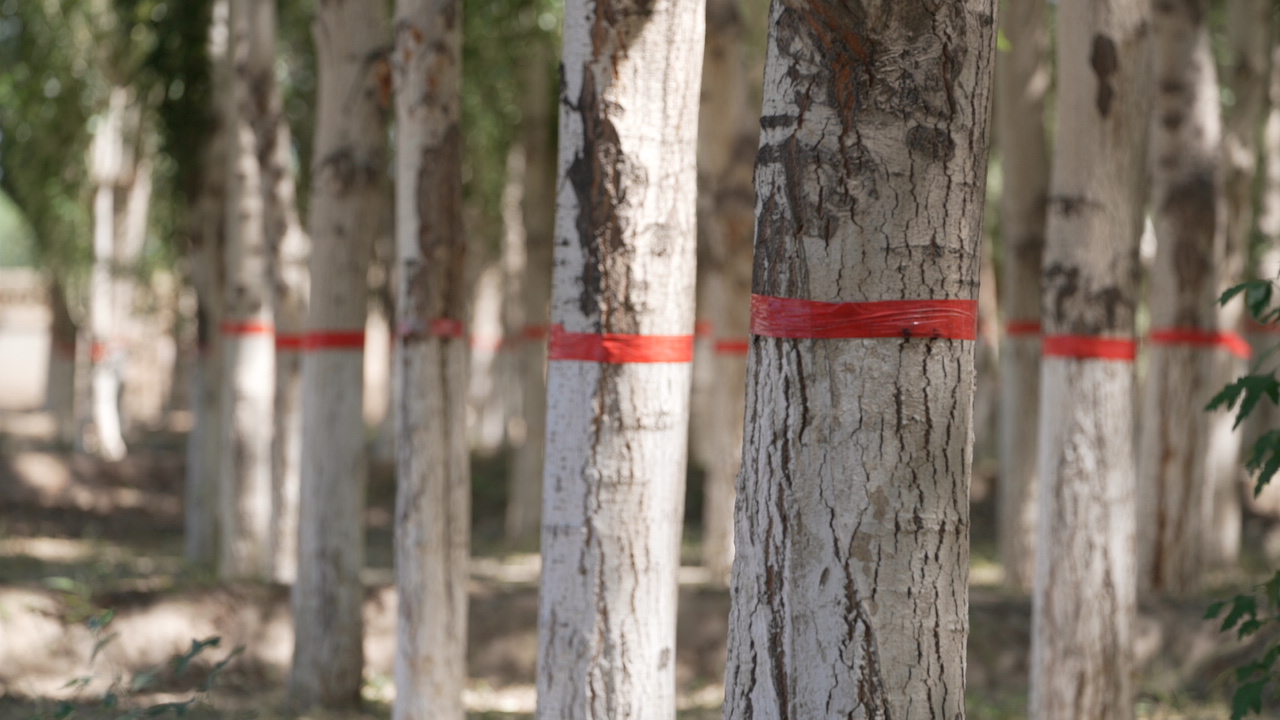 The Kekeya Green Project is located at the northwestern tip of the Taklimakan Desert. Yu Chuan/CGTN

The Kekeya Green Project is located at the northwestern tip of the Taklimakan Desert. Yu Chuan/CGTN

In Wensu County, a major fruit producer, we were given a slice of the sweet, fruity life – yes lots of fruits – and shown a sense of community. Our first stop there was at the Kekeya Green Project.

It's dubbed China's great green wall. It's located at the northwestern edge of the country's largest desert, the Taklimakan. It was established back in 1986, aimed at tackling harsh weather conditions, most especially frequent sandstorms. 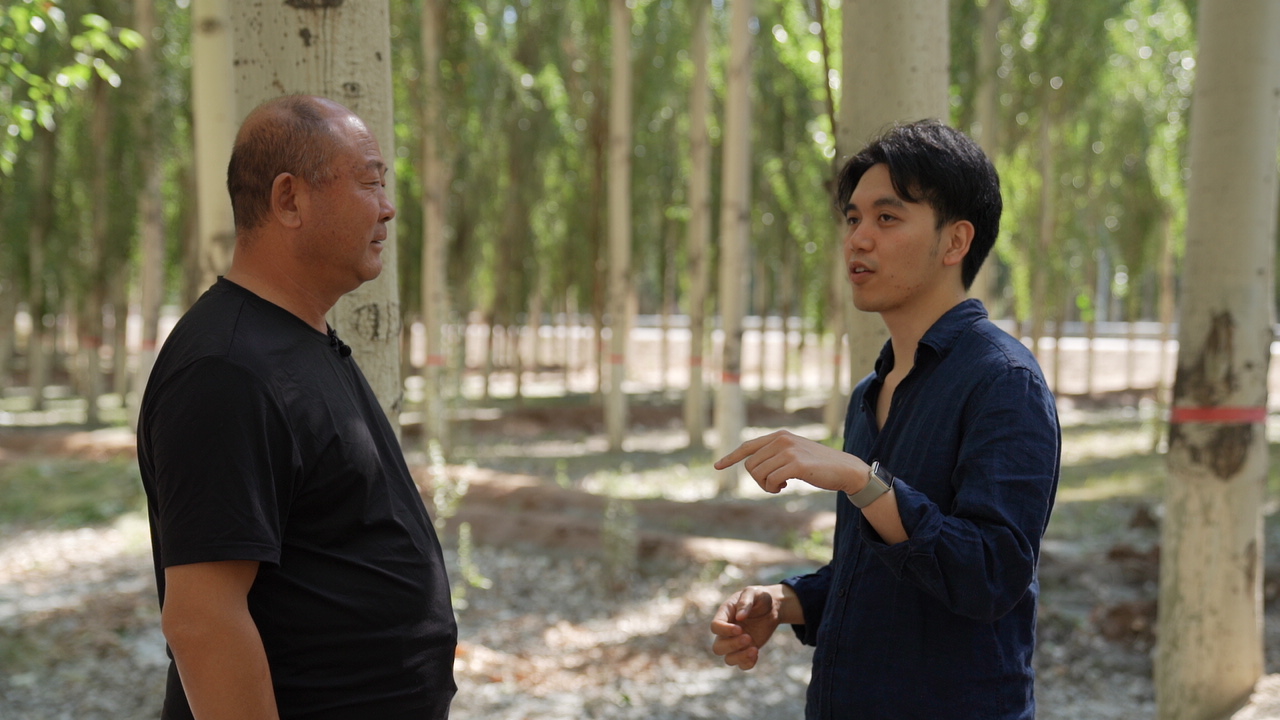 And the initiative has been successful in protecting the area against desertification. Officials give credit not only to the project's forest rangers, but the residents' efforts in helping plant trees and turn the desert into an oasis.

We also visited an apple farm. There I met Zhou Fengxia. She was busy that day, though. We caught her and her husband speaking in front of multiple phones. They were live-streaming. They promoted their produce, which were up for pre-orders three months before harvest season. 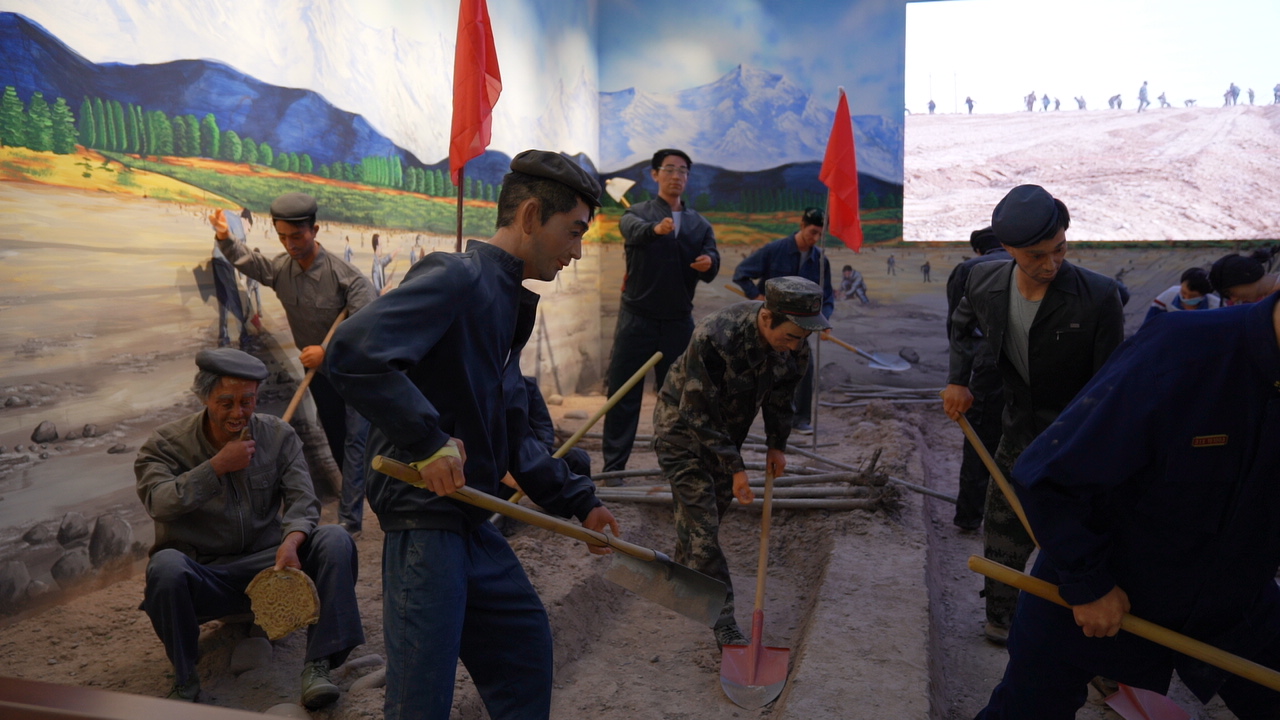 When I got the chance to talk to her, she told me that her efforts on digital platforms were not just for her own benefit. She said she takes advantage of the platform to help promote other growers' produce as well. Known as Xinjiang girl on Taobao, she's become a pro at live-streaming and is now helping train her fellow growers.

Learning more about Aksu and its locals made me miss my home, the Philippines.

Filipinos exemplify, to the best of our abilities, what we call bayanihan. It's a term derived from the word bayan, which means nation, town or community, and bayanihan which literally means to be in a bayan. The whole concept refers to the spirit of communal or civic unity to achieve a common goal. 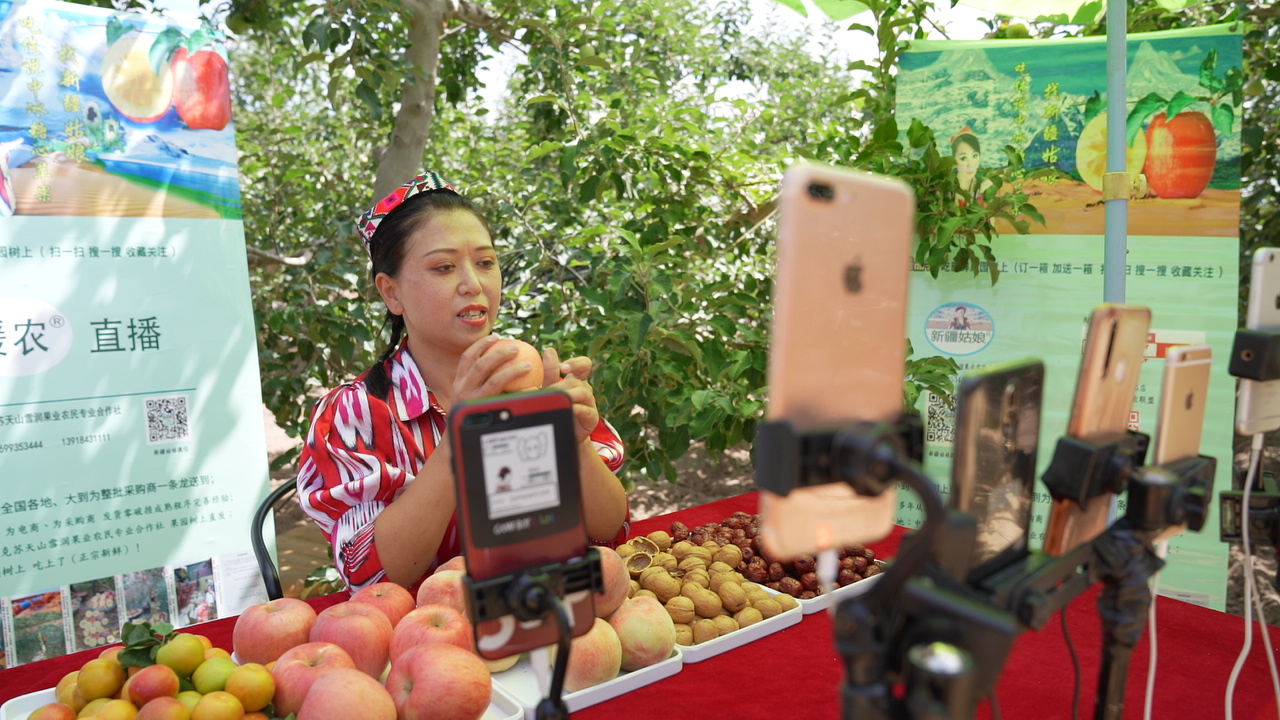 Growing up in a rural area myself, I saw firsthand how bayanihan worked. You'd see neighbors help plough one's farm, or even carry a person's hut and relocate it from one place to another.

I guess this is a quality that I felt beaming from the locals here. Their hospitality and generosity made me feel quite at home – homey enough that when they learned I was reeling from a sore throat, they were quick to teach me the antidote: the watermelon. A variety of watermelon has yellow flesh. Yu Chuan/CGTN

A variety of watermelon has yellow flesh. Yu Chuan/CGTN

I've learned that the summer fruit, being over 90 percent water and a good source of vitamins C and A, is used in Chinese herbal medicine to traditionally heal sore throat.

I guess I'll be having more of those mouthwatering freshness, please.