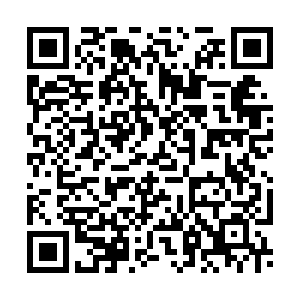 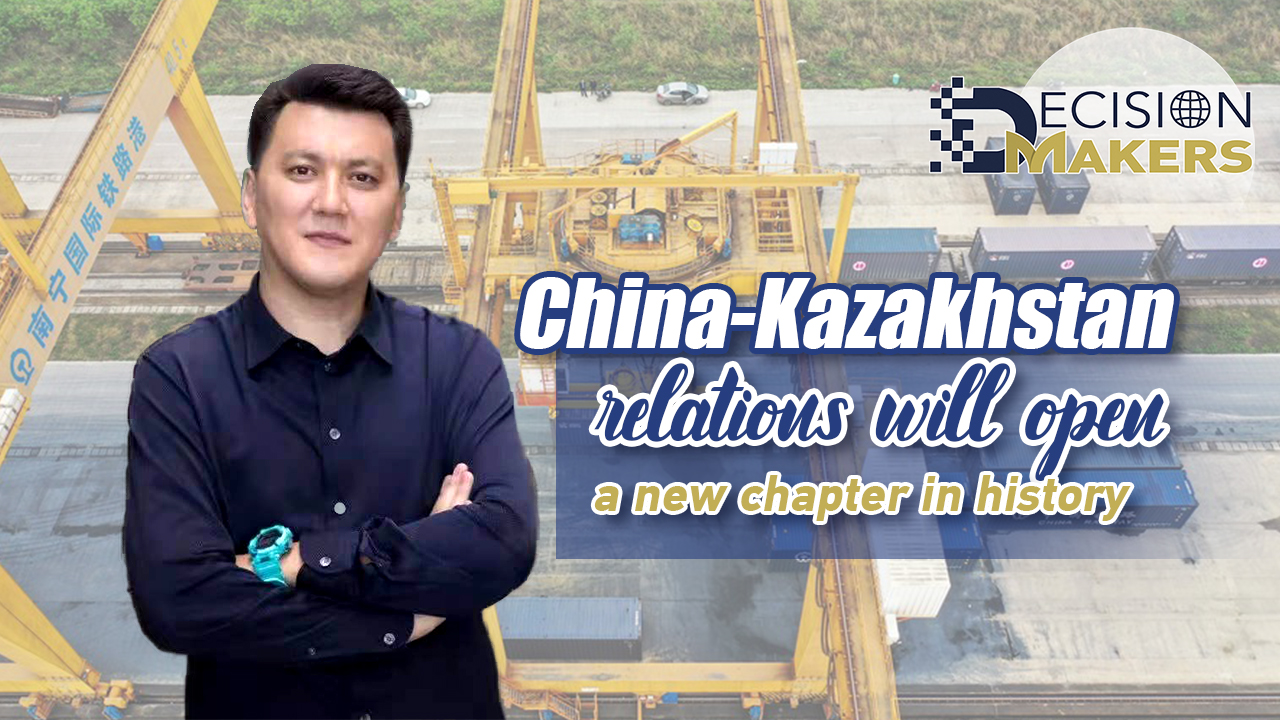 Editor's note: Decision Makers is a global platform for decision makers to share their insights on events shaping today's world. Dr. Erlan Karin is Chairman of the Kazakhstan Council on International Relations (KCIR) and advisor to the President of Kazakhstan. The article reflects the author's opinions and not necessarily the views of CGTN.

The speech of Chinese President Xi Jinping on the occasion of celebrating the 100th anniversary of the Communist Party of China (CPC) is undoubtedly iconic for the Chinese nation and can be regarded as one of the most influential speeches by world political leaders.

Over the past century, especially since adopting the reform and opening-up policy in 1978, China has made tremendous achievements in first establishing the People's Republic of China, and then achieving economic development, and raising the living standards of hundreds of millions of people under the leadership of the CPC. China has accomplished the daunting task of eradicating poverty, a truly remarkable achievement in the history of mankind.

During the past three or four decades, China has experienced unprecedented development, lifting itself from an economically and technologically backward country to the second largest economy in the world. Many experts predict that China's economy will remain in the lead in the future.

China is not only the world's factory, but also one of the world's leading investors and hubs of modern technology. China has invested in almost all other countries. China's large-scale infrastructure projects, which connect oceans and continents, are providing a strong impetus to the development of individual countries and whole regions. Within a short period of time, Chinese technology brands and technology companies have managed to take up a significant share of the global market and establish themselves as flagships in their respective fields.

Overall, with its impressive growth rate and momentum, China's economy remains one of the key drivers and stabilizers for the world economy.

Comprehensive cooperation with China is one of the key directions of Kazakhstan's long-term foreign policy.

Since its independence, Kazakhstan has built a partnership of mutual trust with China on the basis of peoples' friendship and good neighborliness. Political, economic and people-to-people exchanges between the two countries are of a strategic nature. Regular dialogue between the two countries at the highest level has set the tone and foundation for the progress of bilateral cooperation in various areas. 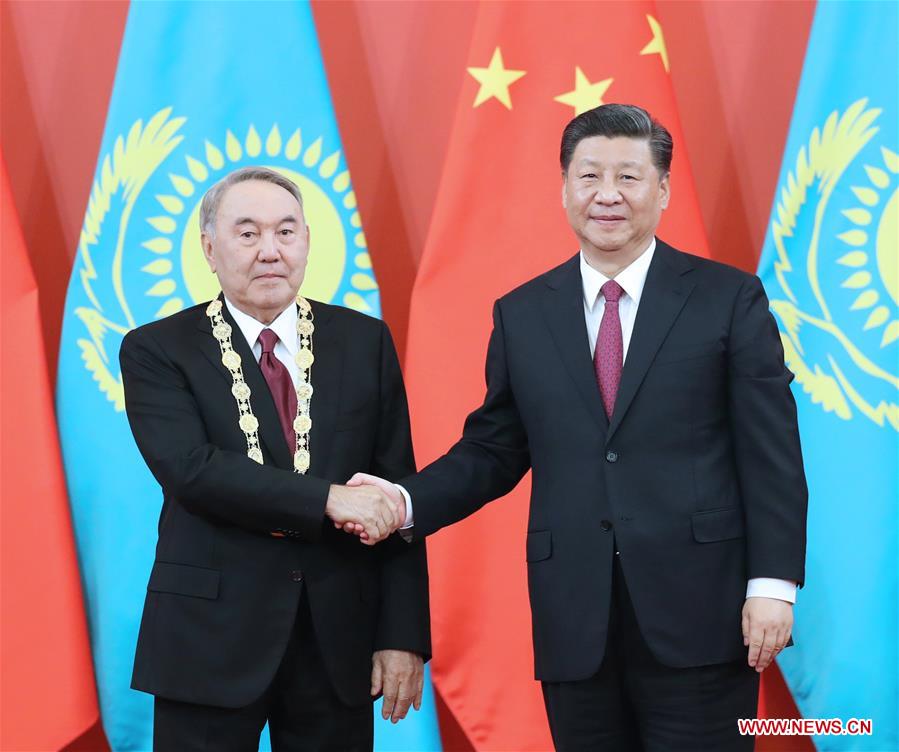 Chinese President Xi Jinping holds a ceremony to award the first President of Kazakhstan Nursultan Nazarbayev the Friendship Medal of the People's Republic of China at the Great Hall of the People in Beijing, China, April 28, 2019. /Xinhua

Chinese President Xi Jinping holds a ceremony to award the first President of Kazakhstan Nursultan Nazarbayev the Friendship Medal of the People's Republic of China at the Great Hall of the People in Beijing, China, April 28, 2019. /Xinhua

Nursultan Nazarbayev, the first President of Kazakhstan, has been on good terms with both former Chinese leaders Jiang Zemin and Hu Jintao and with incumbent President Xi Jinping. This point has also been recognized by the Chinese leaders on many occasions.

The friendship between President Tokayev and President Xi has stemmed not only from the exceptional personal qualities of both leaders and their mutual appreciation, but also from President Tokayev's good knowledge of Chinese culture. Thanks to his studies and working experience in China for years, he speaks fluent Chinese. If I remember correctly, after winning his election, he gave an interview in Chinese to a Chinese state media outlet.

China was one of the first countries President Tokayev visited after he took office. Judging from the outcomes of his visit, the consensus reached, and the prospects for future development, one can say with confidence that Kazakhstan-China relations will open a new chapter in history.

Despite some adjustments to the bilateral ties due to the impact of COVID-19, the general direction of strengthening Kazakhstan-China relations in a comprehensive manner for the benefit of both peoples will remain unchanged.

Kazakhstan and China are doing everything possible to support each other during the difficult times of the pandemic. The two countries have provided each other with humanitarian aid, medicine, and other medical supplies. More than a month ago, Kazakhstan received the first batch of the Chinese vaccine CoronaVac, which made an important contribution to the achievement of mass immunization in Kazakhstan.

Kazakhstan and China continue to systematically strengthen and develop land transit and transport within the framework of the Belt and Road Initiative. The overall scope of cooperation between the two countries is very broad, ranging from transport and logistics facilities, industry, agriculture, finance, new technologies, electronics, tourism, to rapidly-developing areas in Kazakhstan such as innovation, health care, and education.

During a recent telephone conversation between President Tokayev and President Xi, the two governments agreed to explore and develop mutually beneficial initiatives in various fields.

Cooperation between Kazakhstan and China in various areas is not limited to the bilateral agenda. The two countries have similar positions on most issues related to the regional and international situation. Kazakhstan and China have engaged in fruitful cooperation within the framework of influential international and multilateral mechanisms such as the United Nations, the Shanghai Cooperation Organization, the Conference on Interaction and Confidence-Building Measures in Asia (CICA), and the "China+Central Asia" (C+C5).

The year 2022 marks the 30th anniversary of the establishment of diplomatic ties between Kazakhstan and China. In recent years, our mutually beneficial partnership has reached strategic heights and friendship has become stronger. The upcoming anniversary will be an important milestone for both countries to take stock of our great achievements and identify priorities for future development.

(If you have specific expertise and want to contribute,  please contact us at opinions@cgtn.com.)