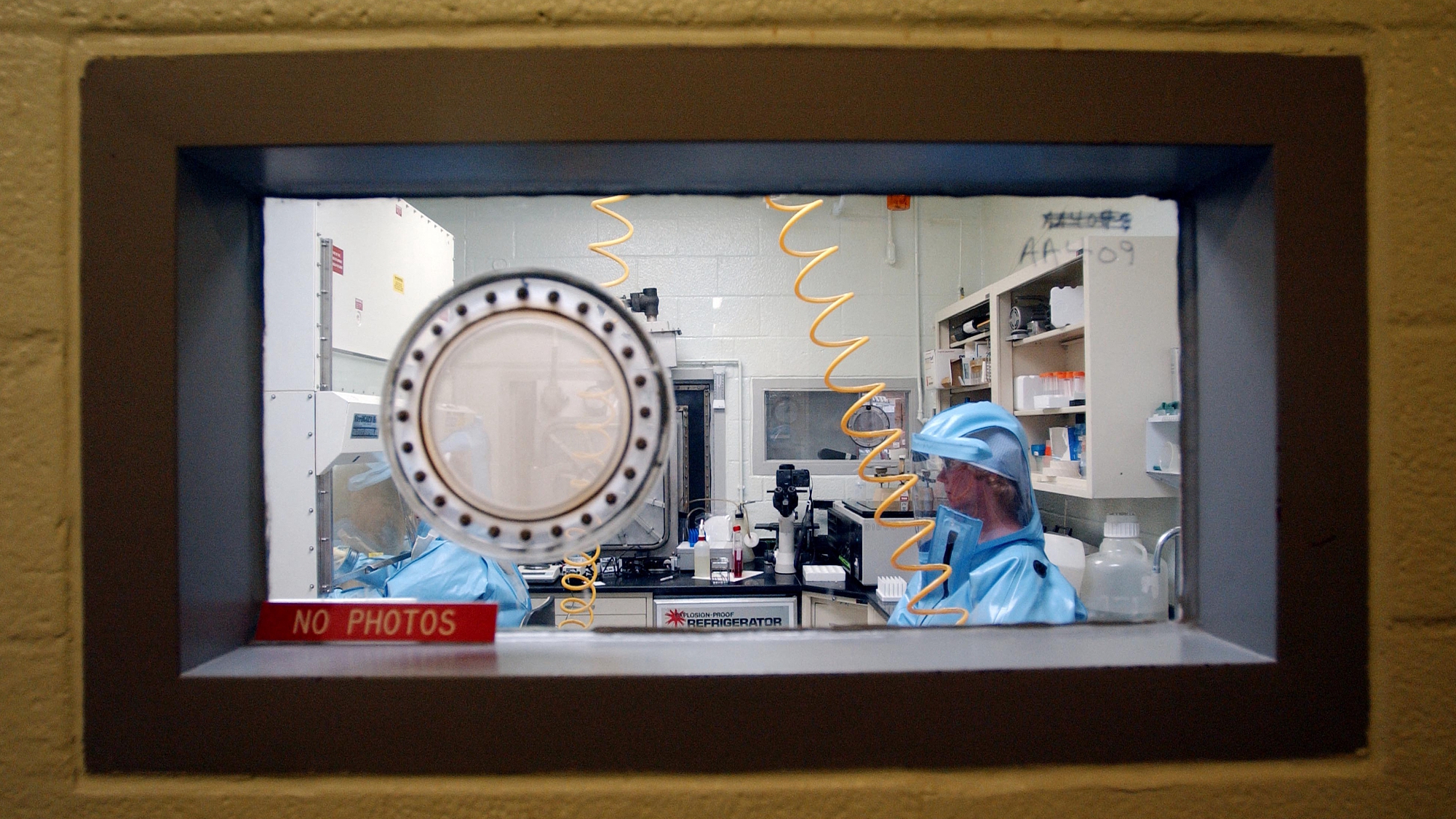 Personnel at work inside the bio-level 4 lab research at the U.S. Army Medical Research Institute of Infectious Diseases at Fort Detrick, September 26, 2002. /CFP

Personnel at work inside the bio-level 4 lab research at the U.S. Army Medical Research Institute of Infectious Diseases at Fort Detrick, September 26, 2002. /CFP

"A deep investigation of everything that happened at Fort Detrick would be interesting indeed, but difficult for reasons of secrecy," said Stephen Kinzer, a senior fellow at the Watson Institute for International and Public Affairs at Brown University.

"Fort Detrick is an enormous complex; it has been for decades the center of American military research related to biology ... some of what's going on there is a secret. For a long time, people were coming out, protesting outside the gates of Fort Detrick for projects of which we don't know the nature," Kinzer, a former foreign correspondent for The New York Times, told Xinhua in a recent interview.

One of the many covert projects was MK-ULTRA, which turned out to be "aimed at uncovering the secret of mind control," said Kinzer, also author of the bestseller "Poisoner in Chief," which revealed the little-known life story of Sidney Gottlieb, a master chemist of the Central Intelligence Agency (CIA) and head of secret mind-control experiments at Fort Detrick and elsewhere in the world.

Kinzer said Gottlieb, hired by the CIA in 1951 to run MK-ULTRA, had not only the right to use prisoners and capture civilians in the United States for his experiments but also "a license to kill from the U.S. government."

Gottlieb "would go to foreign countries and asked intelligence officers or military police to recruit prisoners for him, and he could experiment on them to death if he wanted to," Kinzer said.

He said to find out "the limits of human endurance – how can you kill people, at what moment do they die, how can you seize control of their bodies and their minds," Gottlieb and the CIA hired "Nazi doctors who worked on the concentration camps, and their Japanese comrades," for example, war criminal Shiro Ishii, who headed a notorious Japanese army's biological warfare program called Unit 731 during World War II that conducted human experiments in Northeast China's Harbin.

"Ishii wanted to see how to make people suffer and how they die under various sorts of excruciating torture. So he had Japanese soldiers simply rounding people up in the countryside. They were rounded up and brought to this complex in Harbin. None of them ever left alive ... They were not called people but as 'logs,'" Kinzer said.

At the end of the war, Ishii, as one of the "most gruesome war criminals," was never put on trial, Kinzer noted.

"The Americans decided: We don't want to hang this guy, we want to hire him" because they were interested in Ishii's trove of thousands of microscope slides that contained human organs removed from those who died after being given a certain amount of poison, Kinzer said, adding that was how a deal was made between the United States and Ishii, which was approved by U.S. Army General Douglas MacArthur.

"MacArthur wrote this quote, and this was a secret document never published at the time, 'The value to the U.S. of Japanese (biological warfare) data is of such importance to national security as to far outweigh the value accruing from war crimes prosecutions,'" Kinzer said.

For Kinzer, Gottlieb and his MK-ULTRA colleagues were undoubtedly aware of the extremes of the vivisections conducted by Ishii, just as they would be aware of the backgrounds of the Nazi doctors.

Kinzer believed that the extremes of MK-ULTRA were far from being fully investigated. "It is a very remarkable aspect of MK-ULTRA that although it involves the most extreme and intense experiments on human beings that have ever been conducted by any agency or officer of the U.S. government, it was never fully investigated by the Senate or any other legislative or executive body. There was never an official probe of what MK-ULTRA was and what Sidney Gottlieb did."

Moreover, Kinzer noted MK-ULTRA was just the tip of the iceberg of what was conducted in Fort Detrick, and a detailed analysis of what happened there "would be fascinating."

"It is still the center of all American biowarfare research," he noted, adding biowarfare is "sharply limited by international agreements."

Kinzer's remarks come amid growing support to advance the study of the origins of SARS-CoV-2 globally and opposition to politicizing the origins issue.

In mid-July, permanent representatives of 48 countries to the United Nations Office at Geneva wrote a letter to World Health Organization (WHO) Director-General Tedros Adhanom Ghebreyesus, in which they stressed the importance of cooperation on the study of origin-tracing and that such study is "a matter of science, and should be conducted around the world by scientists."

Following the COVID-19 outbreak in the United States, an online petition submitted to the White House website last year demanded the U.S. government explain the real reason for the closure of the U.S. Army Medical Research Institute of Infectious Diseases, which has a history of multiple accidents and clarify whether there was a virus leak from its Fort Detrick lab.

In an article published last week in The Manila Times, one of the leading national media outlets in the Philippines, Mauro Gia Samonte, a columnist, wrote that the U.S. has been trying to divert attention after it failed to correctly address the epidemic by blaming China. He also quoted an anonymous source who accused the Fort Detrick lab of a virus leak.

China calls for a thorough probe in the U.S.

Chinese Foreign Ministry spokesperson Zhao Lijian has on many occasions called for a thorough probe into the origins of the COVID-19 outbreak in the United States and problems existing in Fort Detrick and over 200 U.S. bio-labs overseas.

"Those guys didn't even say, 'We were coming from the CIA.' They have kind of a code-name working for some projects. It was highly secret even to people that worked in Fort Detrick," he said.

"If there ever is the need for the U.S. to develop a bioweapon, it would certainly be made in Fort Detrick," Kinzer said. "That's the only place where it could be made. That's where all scientists are; that's where all the toxins are."