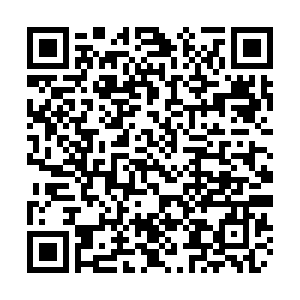 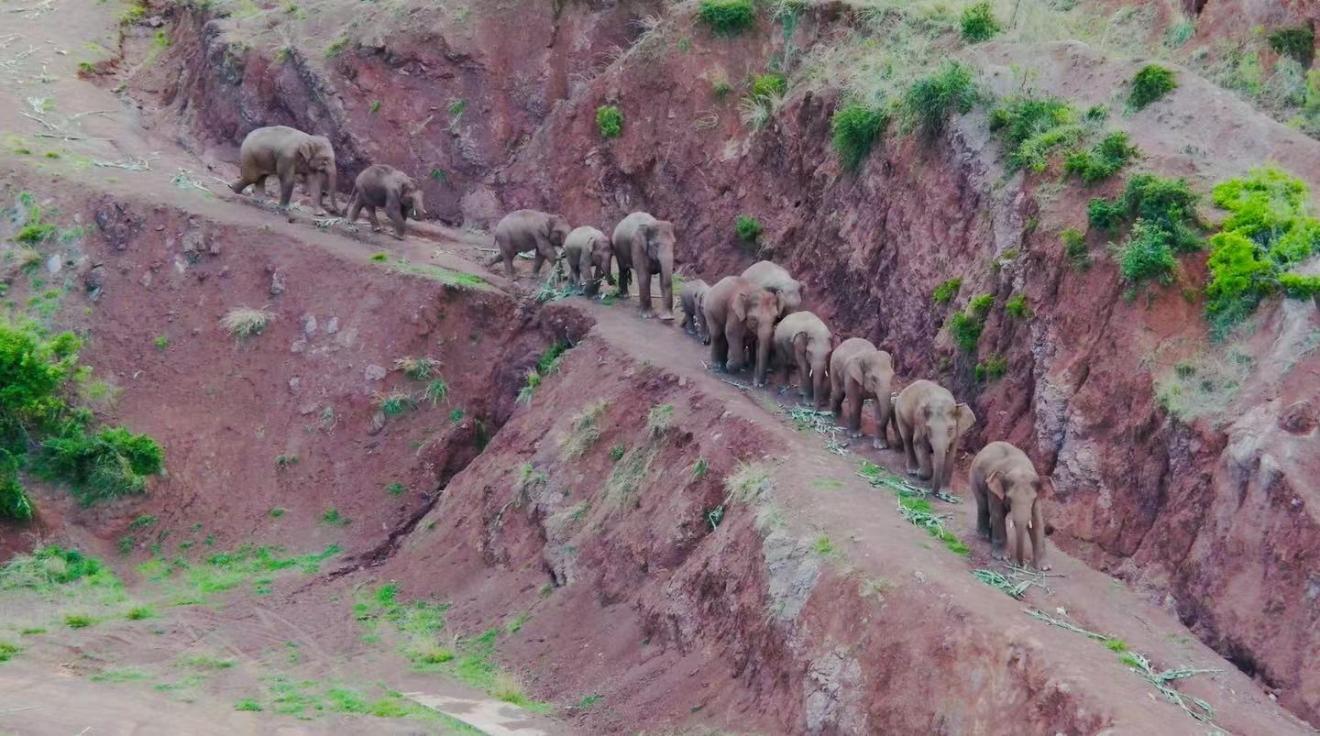 The unusual march of a herd of wild Asian elephants, deviating from their traditional migration route in southwest China's Yunnan Province, has captured unprecedented global attention.

The herd has been marching northward for more than a year, sparking curiosity, concern and heated discussions among the public. They have become global stars during the past few months. Their activities including sleeping, taking mud bathing, or playing, have captivated millions.

In recent weeks, pachyderms appear to end their epic journey as they show signs of returning to their original habitat. However, authorities are taking precautionary measures to ensure the safety of both the animals and local residents. 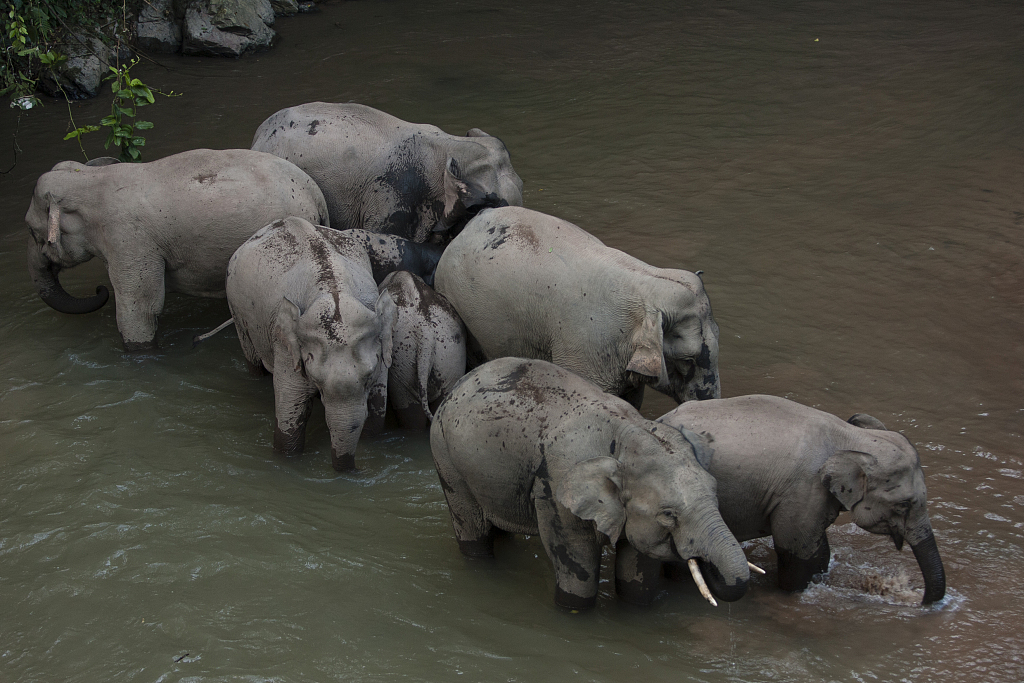 In March 2020, the herd of elephants set out from their natural habitat in Xishuangbanna, the southernmost prefecture of Yunnan. It is known as a tropical region that shares borders with Laos and Myanmar.

All the way north, they passed through the cities of Pu'er, Honghe and Yuxi. Then, in early June, they eventually reached the outskirts of Kunming, the provincial capital, home to some eight million people. At this point, they had traveled for more than 482 km, probably the longest journey ever recorded by a herd of elephants in the country. 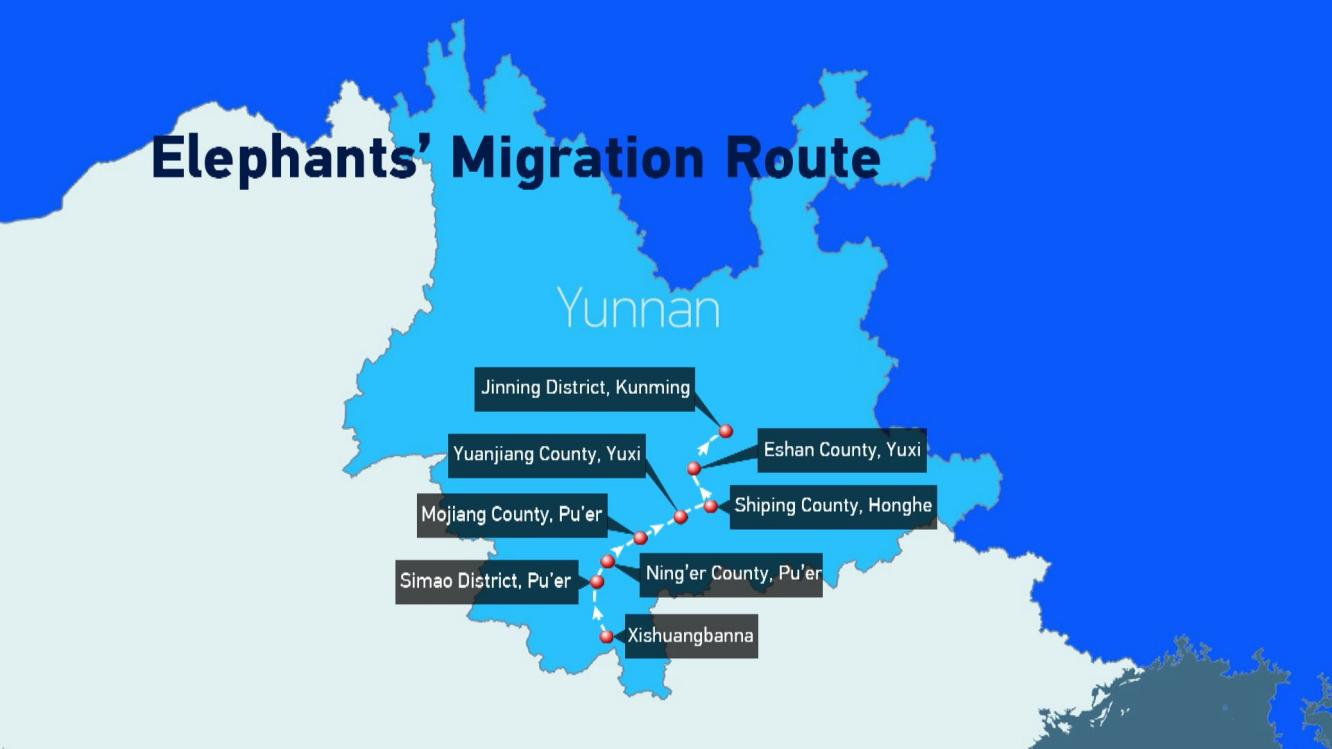 Migration route of the herd of Asian elephants./CGTN Graphic

Migration route of the herd of Asian elephants./CGTN Graphic

The herd started the journey with 16 individuals, but three of them dropped out of the trip en route, and two calves were born during their march.

Today, the "tour group" comprises six adult females, three adult males, three sub-adults – elephants aged 5 to 15 years – and three calves. In June, one male broke away from the group and wandered off on his own.

Authorities along the herd's migratory route have responded proactively to their movements. A special command center has been set up, deploying a dozen drones to keep round-the-clock tabs on the elephants.
For the drone operators, their mission is rife with challenges, especially on rainy days.

"In these conditions, it's difficult or even impossible to fly the drones, so the command center has to send people to search for them on the ground, which is less effective due to the steep mountains," Zhang Sijie, a drone operator from Yunnan Provincial Forest Fire Brigade, told CGTN. 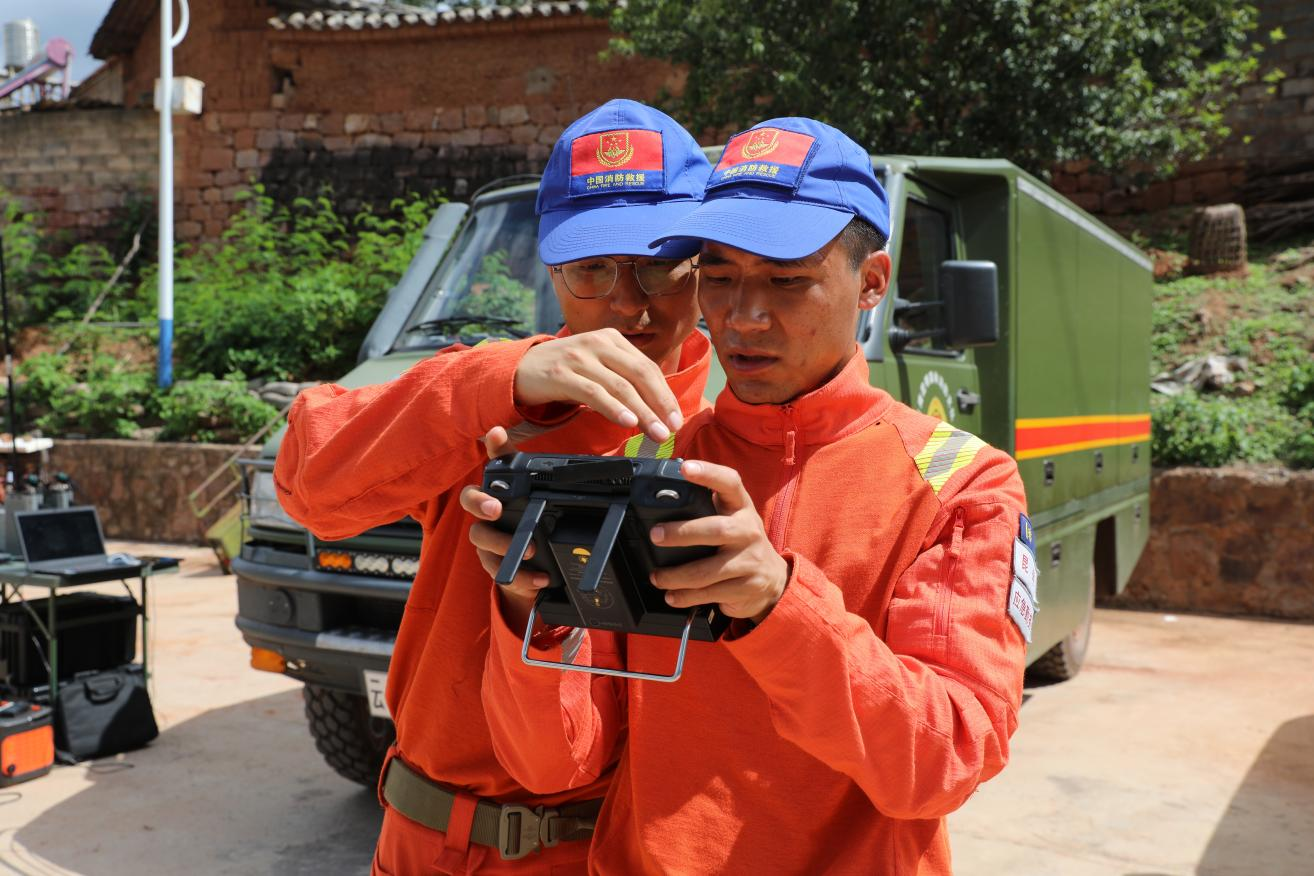 Heavy machinery also plays an important role. To prevent the tuskers from sneaking into populated areas, hundreds of trucks and excavators have been mobilized every day to form roadblocks at key intersections.

Another important daily routine is to prepare tons of food for the giants, to minimize their disturbances in local communities, and at the same time to bait them into turning back.

"Our expectation is that the herd will travel southward and finally return to their original habitat in Xishuangbanna. This is the most ideal outcome," said Chen Mingyong, a professor on Asian elephant studies from Yunnan University. He is a member of the panel of experts at the command center. 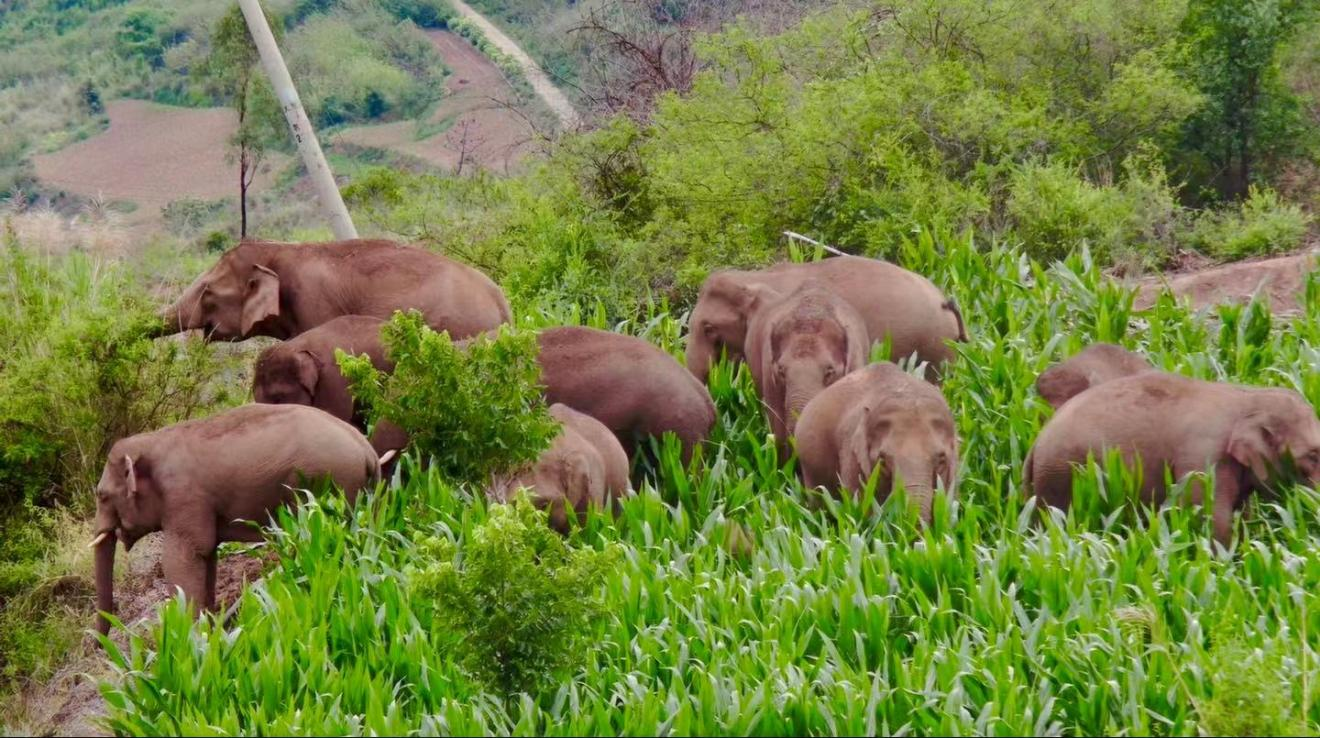 The elephants forage in the farmlands along their migratory route./Courtesy of Yunnan Provincial Forest Fire Brigade

The elephants forage in the farmlands along their migratory route./Courtesy of Yunnan Provincial Forest Fire Brigade

The special arrangement helped prevent conflict between locals and pachyderms. But in some cases, the naughty elephants have been a nuisance. They have raided farmlands and gorged on crops including corn, paddy rice and sugarcane.

They have also poked their trunks through villagers' doors, helping themselves to food and leaving great messes. But locals have shown much tolerance or even kindness to them.

"The elephants are hungry. They didn't mean to cause trouble," said a local woman.

Inevitably, the herd has caused significant economic losses, and officials said they would not turn a blind eye.

"We've urged related insurance companies to start loss assessments and compensations. We'll do our best to safeguard the residents' legitimate interests," Xiang Ruwu, an official from the Yunnan Provincial Forestry and Grassland Bureau, said at a press conference. 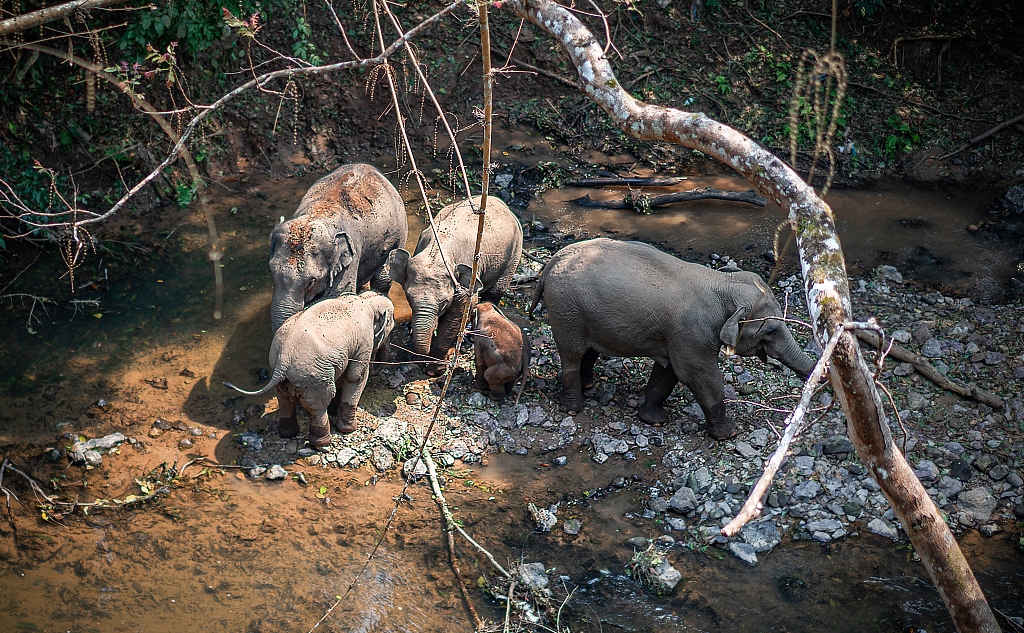 As the world watches the creatures in fascination, the adventure has also triggered heated debate over the reasons behind elephants leaving their protected habitat.

"Migrating to forage for survival is just one of their instincts. Like the nomads in human society, they just move back and forth and don't have a fixed place of residence," said Professor Chen, noting that this is the premise for all discussions.

Xishuangbanna is the largest habitat for Asian elephants in China. As early as 1958, a nature reserve was established here to protect the region's unique biodiversity. However, over the past few decades, more reserves at different levels have been zoned, taking up more than 20 percent of the prefecture's total area.

Conservation efforts have allowed Asian elephants to prosper, with their population growing from about 170 in the 1980s to some 300 today. Apart from Xishuangbanna, the animal now can also be found in the neighboring Pu'er and Lincang. This has inevitably caused a problem -- growing demand for space and food. 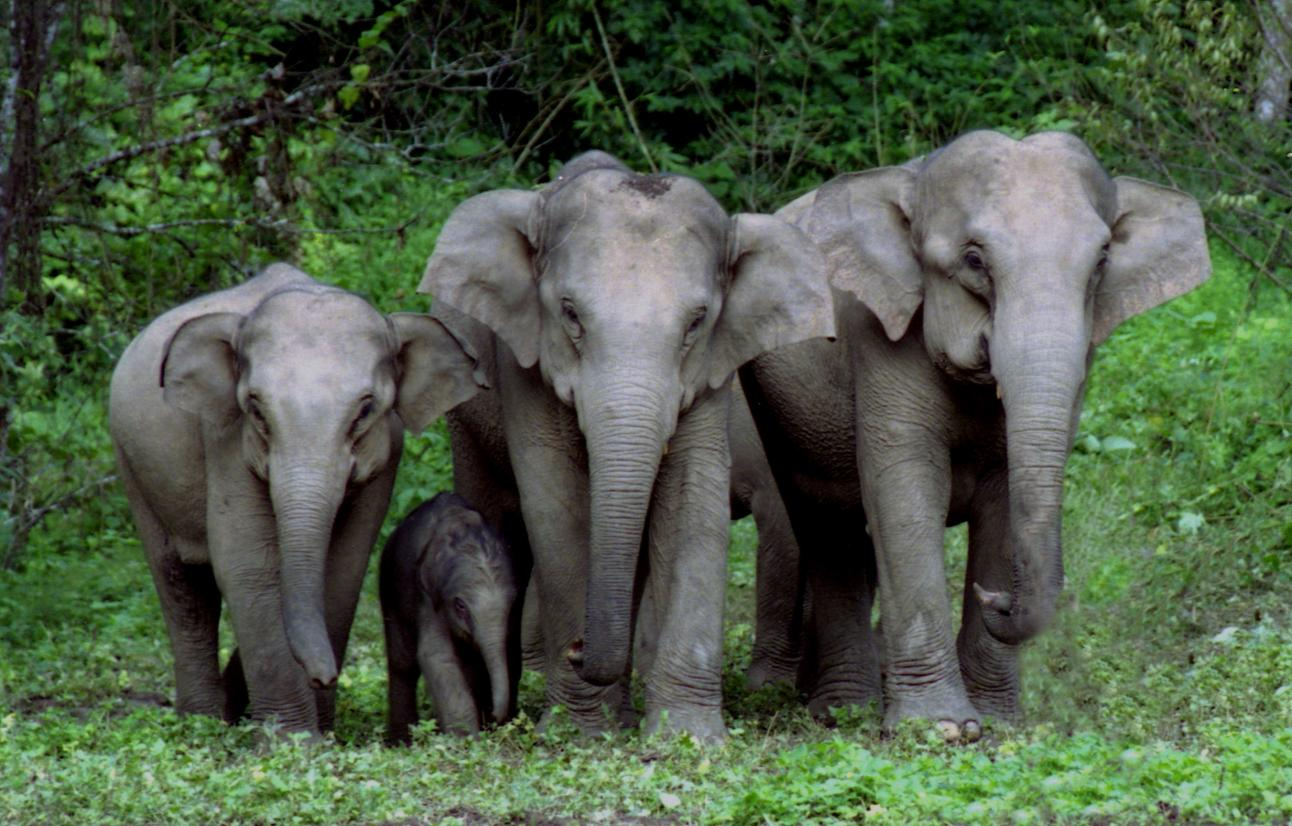 A group of wild Asian elephants walks in the forests of Xishuangbanna./Courtesy of the Management Bureau of the Xishuangbanna National Nature Reserve

A group of wild Asian elephants walks in the forests of Xishuangbanna./Courtesy of the Management Bureau of the Xishuangbanna National Nature Reserve

A few researchers also pointed out that as the forests become increasingly leafy with giant arbor trees, the jumbo mammals find it more difficult to access their favorite plants, such as wild plantains and tiger grass.

"What Asian elephants need are not places with dense forested vegetation. Through strict management, their habitats are getting more dense, causing grasslands and shrubs to gradually disappear. It's beneficial for some other species like birds, as what they can feed on increases. But for Asian elephants, their food resources are decreasing," said Guo Xianming, a senior engineer at the Scientific Research Institute of the Xishuangbanna National Nature Reserve.

Since their great appetites can't be easily satisfied, the elephants have gradually sought out a good bargain -- consuming crops in human habitats, which costs them much less time but provides a lot more nutrients. And this is considered a major motive behind the herd's northbound long march. 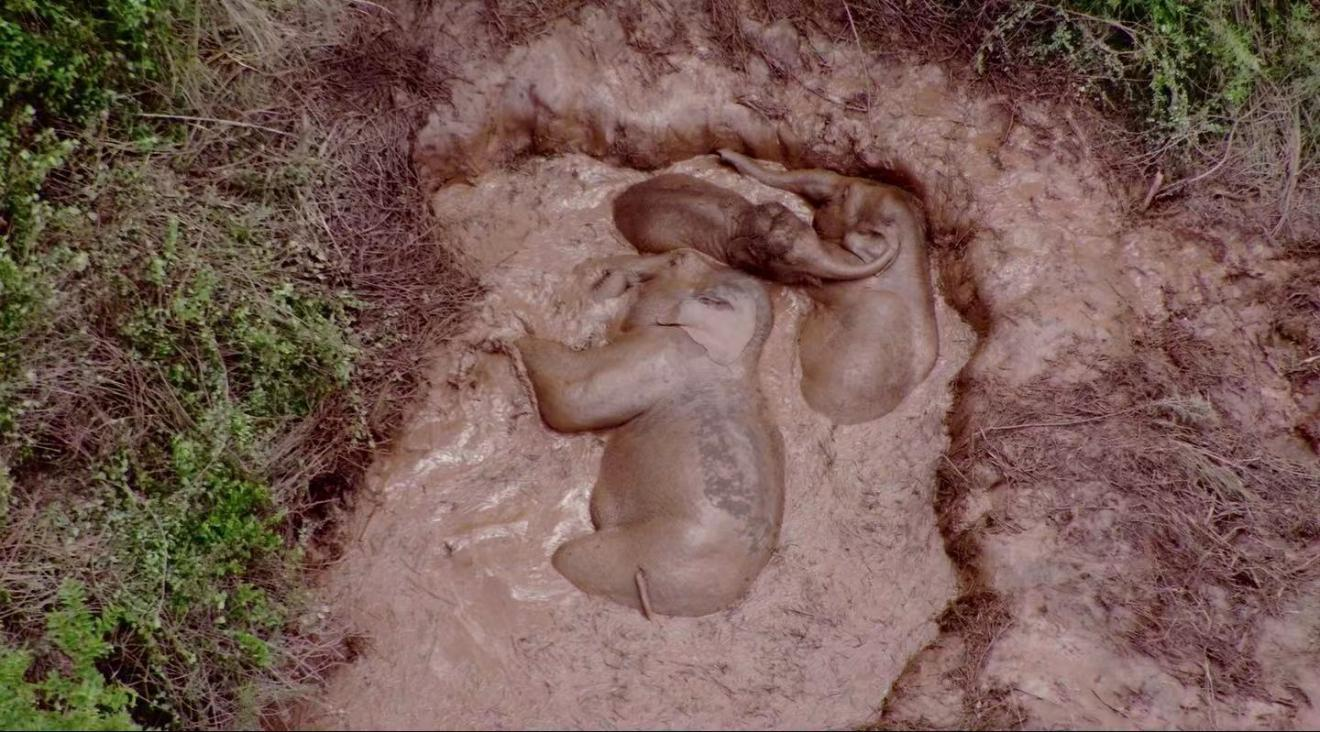 "They might have failed to find an ideal place, and they had no idea what lie ahead, so they kept moving forward," Guo said.

Some people have also blamed plantation of commercial crops like rubber trees, which they argue has resulted in the loss of the elephants' habitats. But experts have denied such accusations.

"The protected zones are what have been recognized as the elephants' habitats, but farmers have rights to utilize the surrounding land. They conduct certain producing activities in these areas for their livelihoods, this shouldn't be taken as something destructive," said Guo.

Over the years, as the pachyderms have increasingly intruded human settlements making conflict unavoidable. In some encounters human lives and considerable property loss were reported. This is a common phenomenon in countries where elephants reside.

A study by the Beijing Normal University shows that between 2013 and 2019, direct economic losses from elephant-human conflict in China resulted in a loss of $30 million. 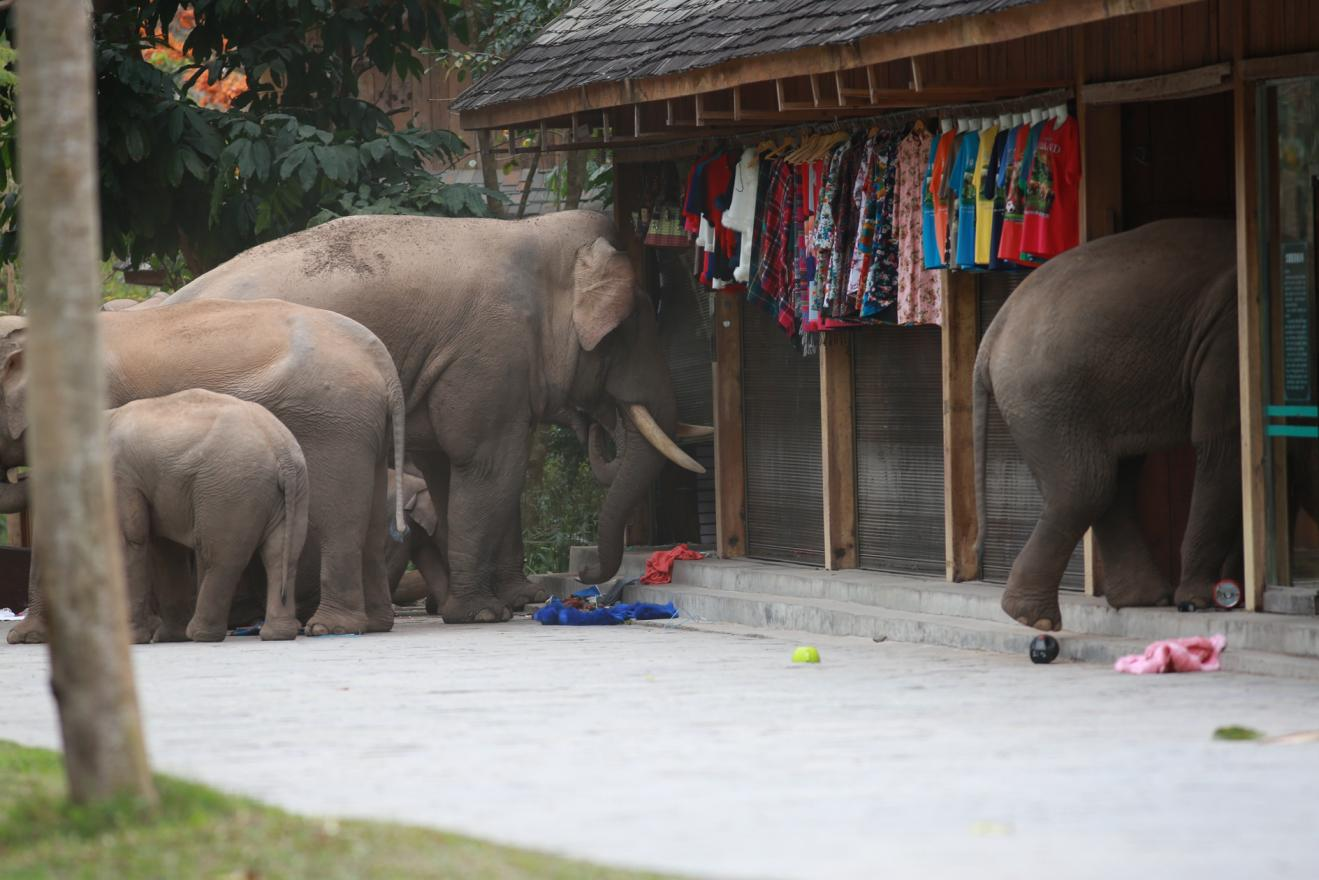 Some Asian elephants in Xishuangbanna break into home of local people./Courtesy of the Management Bureau of the Xishuangbanna National Nature Reserve

Some Asian elephants in Xishuangbanna break into home of local people./Courtesy of the Management Bureau of the Xishuangbanna National Nature Reserve

But herein lies the question for local governments – how can conservation of the endangered species be balanced with protecting people's well-being?

As one of the earliest trial projects, the application of a monitoring and early warning system has proven effective to avoid encounters with the tusked visitors. Apart from drones, more smart devices like infrared cameras and a broadcasting system have also been adopted.

Another simple yet practical experiment is fencing off human settlements with metal railings in risky areas.

"In the past, as the elephants frequently came to our village, we just lived in horror. Since local authorities experimented with the railing project here in 2017, they've rarely bothered us, and we're feeling a lot more relieved now," said Feng Guanglin, a villager living in the proximity of a nature reserve.

But either eluding or obstructing is not a fundamental way out. Both Xishuangbanna and Pu'er are experimenting with growing plants or crops in designated areas, a project that's been dubbed the "elephant canteen". It is hoped this might mitigate their impact on people's lives.

As for related policies, since 2014, the Yunnan provincial government has purchased commercial insurance for all residents, who will get compensated when wild animals cause trouble.

These efforts are easing tensions. Many locals now have mixed feelings about their giant neighbors.

"I don't bear any hatred against the elephants. I used to be unhappy when they pilfered our crops. But because of the animals, many of us can work at a nearby tourist site called 'Wild Elephant Valley'. The elephants just bring us job opportunities," said Feng Guanglin. 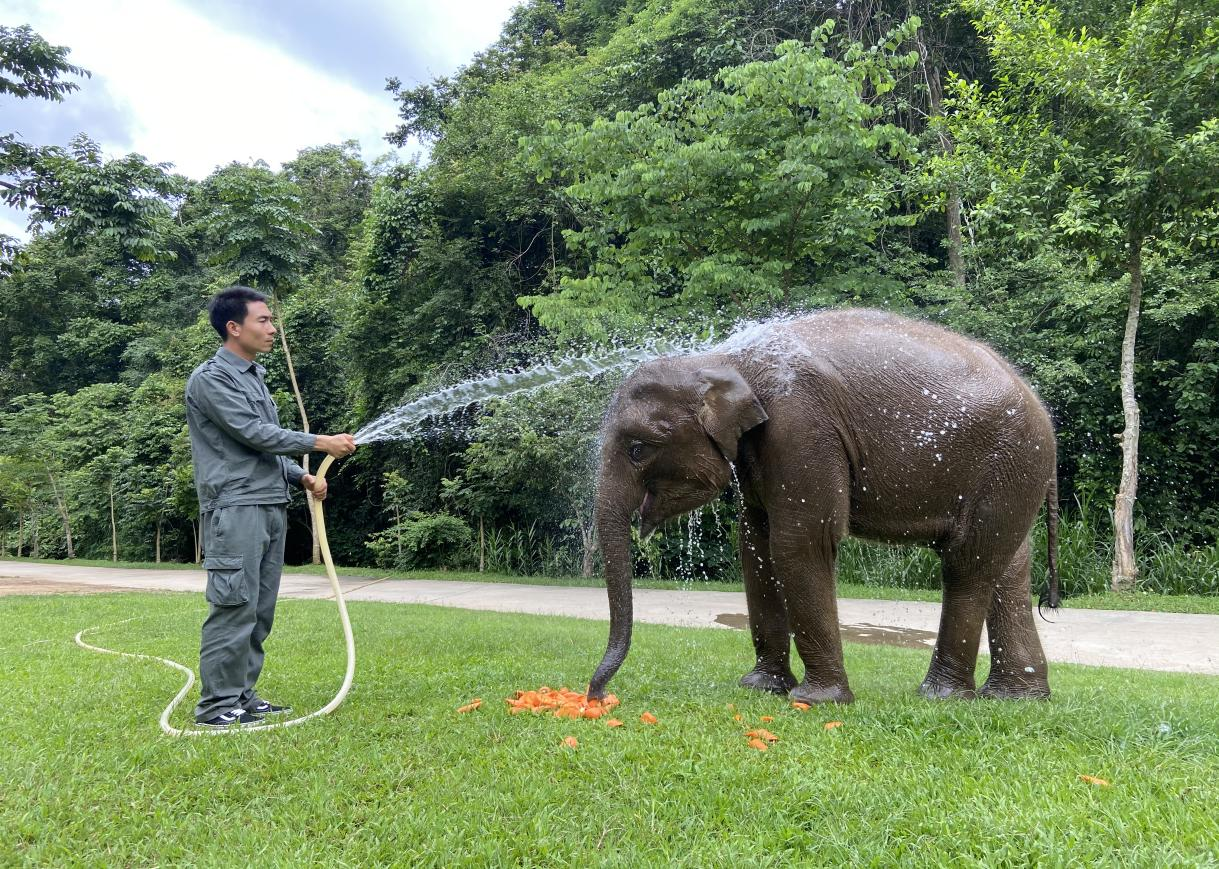 A keeper at the Asian Elephants Breeding and Rescue Center bathes an elephant. Yang Jinghao/CGTN

A keeper at the Asian Elephants Breeding and Rescue Center bathes an elephant. Yang Jinghao/CGTN

For some, their love towards the animals has only grown. They always lend a helping hand when the jungle mammals are in trouble.

A special rescue center in Xishuangbanna now keeps some 10 elephants rescued from the wild, all were injured or deserted. Here, the keepers, who call themselves "elephant dads", take care of the creatures as if they were their own children.

"I have a kind of special feeling towards elephants. Every day I'm working, when I see the ones who were almost on the brink of death greeting us happily, my heart fills with a sense of happiness and accomplishment," said Xiong Chaoyong, a keeper of the center.

As the number of Asian elephants in China continues to grow, more challenges still lie ahead. In the long run, many experts propose a special national park be established as a solution to better conserve the species.

Professor Chen said the current nature reserves are not designated for elephants. They've been set up to protect the whole forest ecosystem, which is fragmented.

"Establishing a national park means we could open a larger area, which could include forests of different uses outside the reserves and even some farmland to make a big enough living space for the elephants," said Chen.

Creating national parks is China's latest attempt to protect the environment, which means larger space for wildlife and more effective modes of management. The first 10 establishments of this kind are expected to be formally launched later this year. 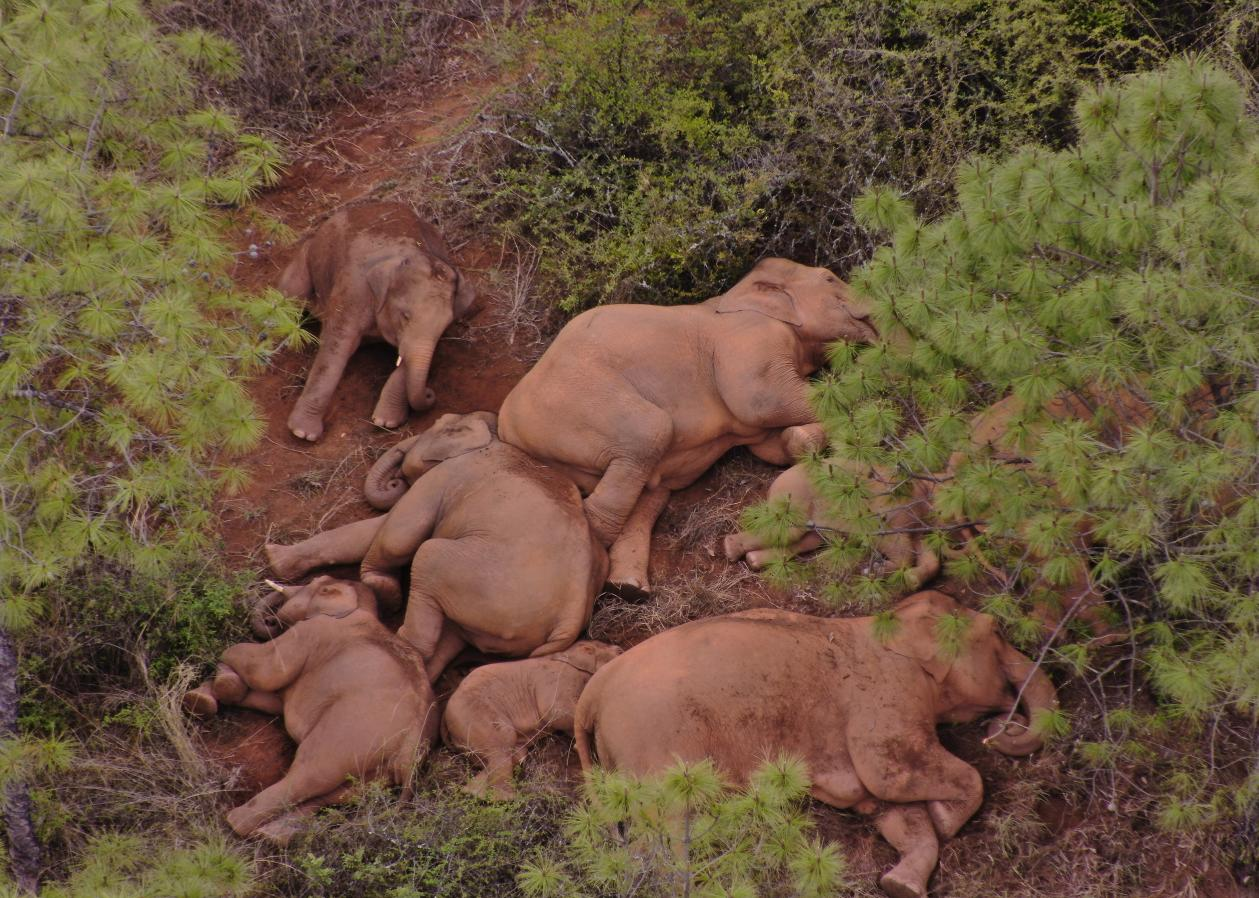 The herd of wandering elephants rest in a wooded area during their journey./Courtesy of Yunnan Provincial Forest Fire Brigade

The herd of wandering elephants rest in a wooded area during their journey./Courtesy of Yunnan Provincial Forest Fire Brigade

Local authorities said that working out a long-term scientific blueprint is a pressing task.

"We also need to strengthen our research on Asian elephants in terms of their nature, feeding habit and biological characteristics for better policy-making. It is also important to scale up investment on the protection work," said Dao Jianhong, Deputy Chief of the Xishuangbanna Forestry and Grassland Bureau.

Having trudged for more than a year, people expect the wandering herd to go back to their forest home as early as possible.

On July 7, the elephant separated from the rest was tranquilized and safely sent back, as his presence was posing a danger to public safety. But experts say the remaining animals cannot be treated in the same way, as it is too risky for both the giants as well as human beings and that a gentle approach is still the priority.

There is a relief that the herd looks to be moving southward, but it could take months for them to return home.

"They'll have to trample over natural barriers, such as the Honghe River and even mountain ranges, resulting in obstruction," said Professor Chen.