It's been a two-decade long process for the International Federation of Muaythai Associations, or IFMA, to get Muay Thai into the Olympics. Muay Thai, the national sport of Thailand, is a combat sport like few others. Once used to decide the fate of kings, it is a martial art bound by thousands of years of tradition. But July 20, 2021, could shape the next thousand years, as Muay Thai was granted full recognition by the International Olympic Committee (IOC).

"I am so grateful that Muay Thai has finally been recognized by the IOC," said Dr. Sakchye Tapsuwan, president of the IFMA. "The past 20 years have been such a long road, but this is the start of an exciting journey for our traditional sport to finally become an Olympic one." 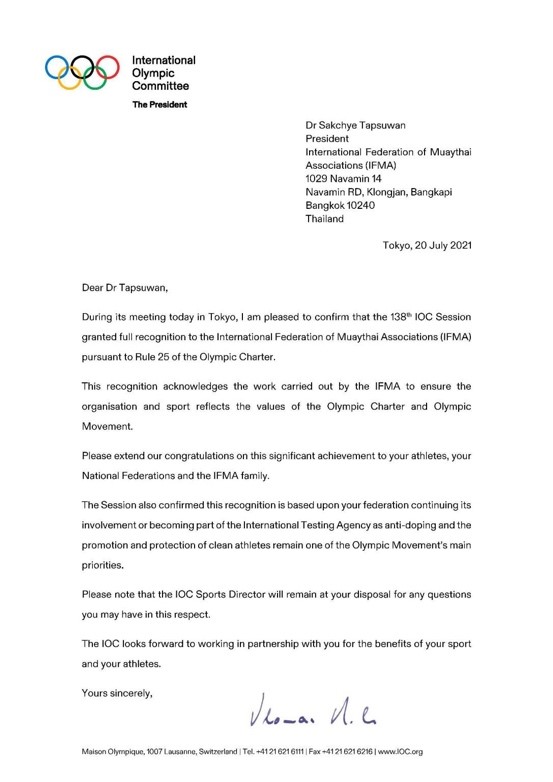 The letter of confirmation and congratulations after the 138th IOC session unanimously voted on the approval of IFMA and Muay Thai to be fully recognized by the IOC. /IFMA

The letter of confirmation and congratulations after the 138th IOC session unanimously voted on the approval of IFMA and Muay Thai to be fully recognized by the IOC. /IFMA

Muay Thai still faces a long road before it can become an event at the Games. It will also be a long and difficult road to heal the entire industry from the devastating blow brought on by the COVID-19 pandemic.

The pandemic has hit Muay Thai hard, with tournaments and stadiums closed due to a cluster of infections discovered at one crowded event in Lumpinee Stadium in early March 2020. Since that fateful day, nothing has been the same. Boxing camps have gone bankrupt, promoters can't organize fights, professional fighters are leaving the industry in droves, up-and-coming fighters are trying their best to cling on and an entire new generation may be lost. 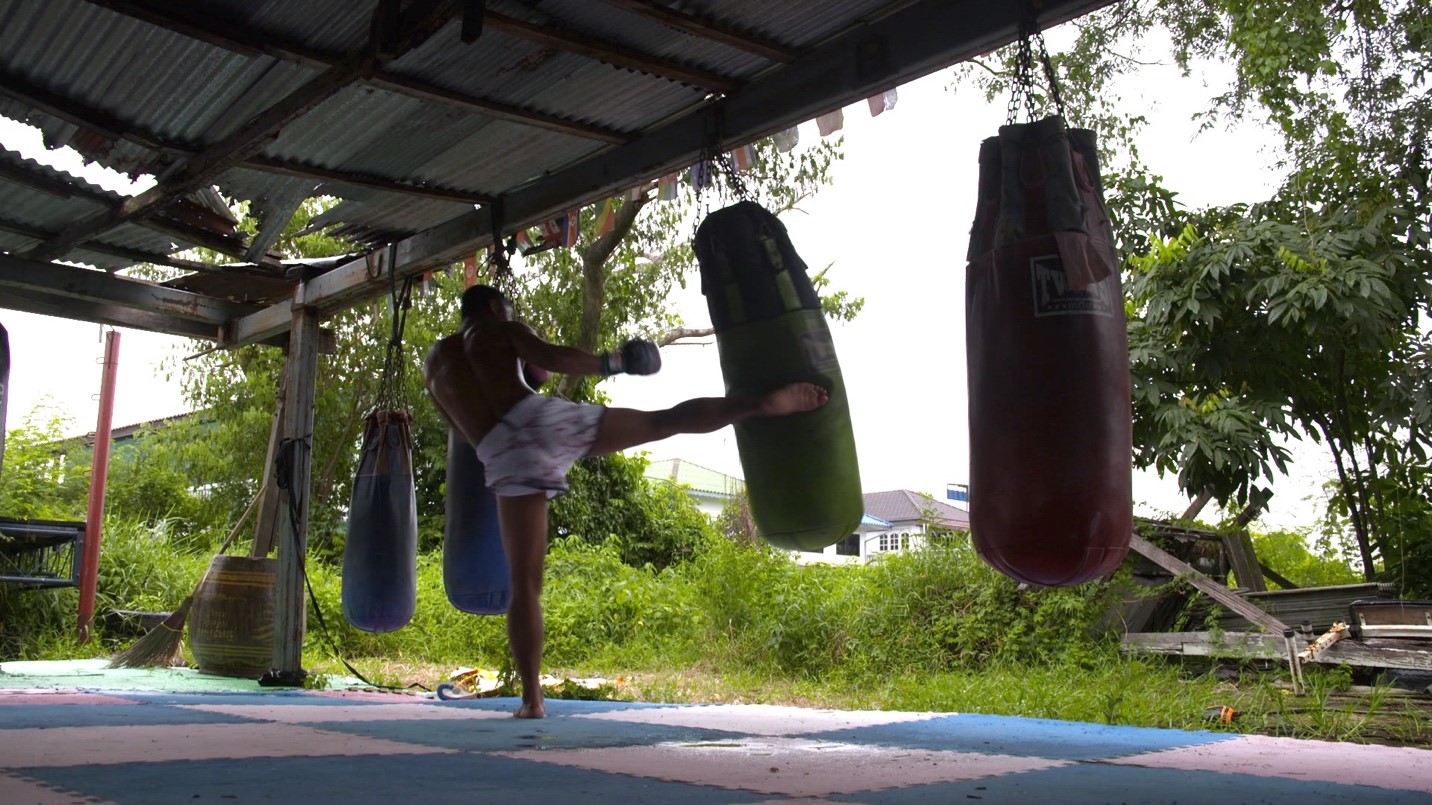 For many rural Thais, the national sport of Muay Thai is seen as a path to lift them out of poverty. /CGTN

For many rural Thais, the national sport of Muay Thai is seen as a path to lift them out of poverty. /CGTN

"For the Muay Thai industry, the government fixes its attention and efforts on being an official Olympic sport," said Dam Srichan, a prominent Muay Thai promoter. "They're all focusing on the future. No one takes a closer look at the reality – the reality of how the fighters are living and what they are going through. They are struggling and they need help to earn a regular income so they can become financially stable."

Thai boxers earn money when they fight. With no matches or competitions, their income is reduced to zero. The majority of Thai boxers are not eligible for aid or financial support.

In September 2020, the Muay Thai community, including promoters, camp owners and fighters, rallied outside the Tourism and Sports Ministry to pressure the government into allowing competitions of the sport to be held freely around the country.

But then, Thailand was struck with its second and third wave of COVID-19 infections. In the midst of its deadliest outbreak, the uncertainty is weighing heavily on fighters across the country. 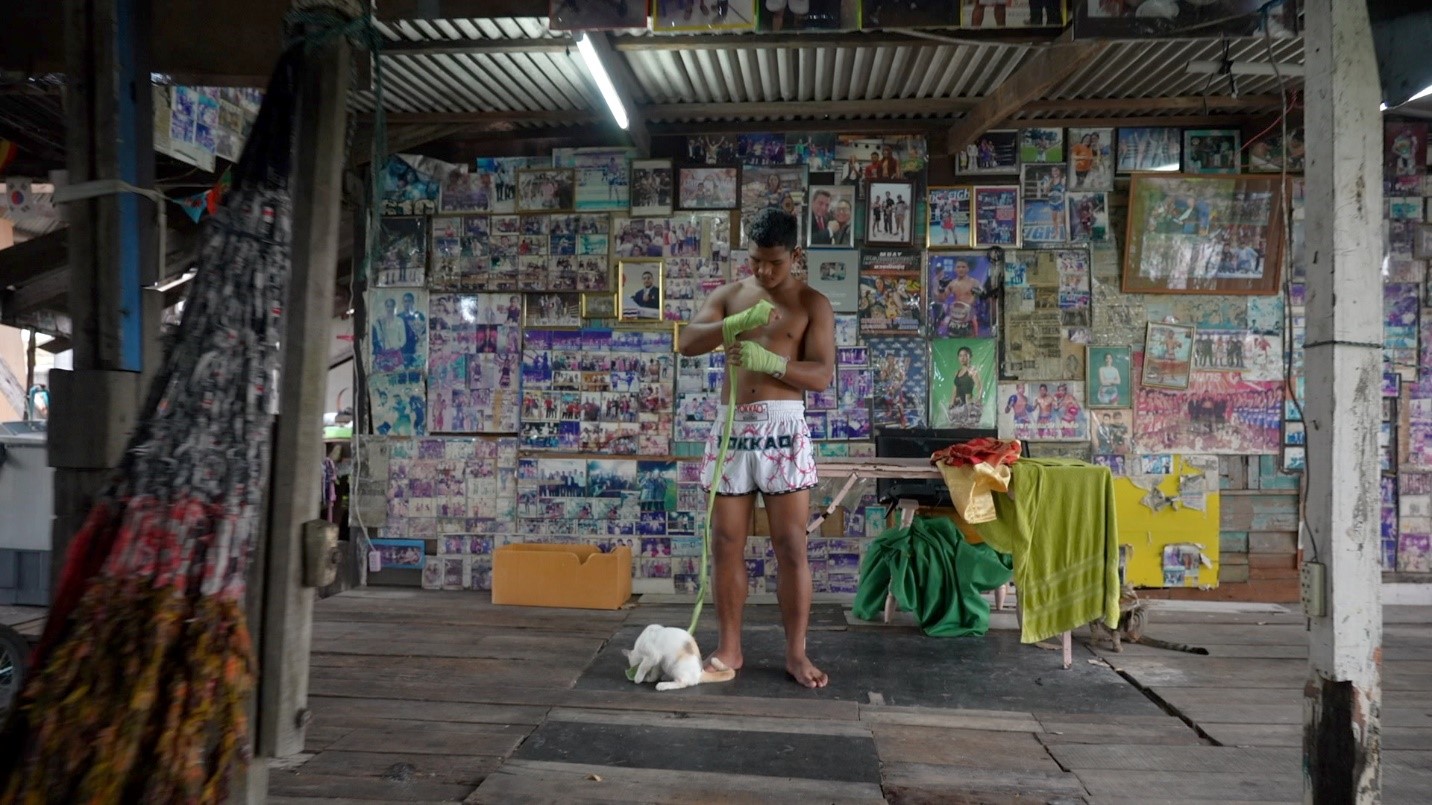 Sangarthit Looksaikongdin is one of Thailand's most promising young fighters. Currently ranked 15th in the world by the World Boxing Association, he was seeking matches with big-name international fighters in a bid to move up his rankings. However, COVID-19 has frozen his dreams.

Before he could walk, Sangarthit packed a mean punch. The jabs, the kicks, all came naturally. The ring was his playground.

He was born into a family of fighters – Muay Thai runs through his veins. His pristine boxing record testifies to that. At just 17 years old, he was walking a path paved gold.

But the winning streak came to a screeching halt. He was blindsided by COVID-19.

"The pandemic has had an impact on my whole family as we are all in the Muay Thai industry," Sangarthit said. "Now, we have run out of our savings. There's no income but the expenses are piling up. I can't even pay for my tuition fees."

Sangarthit still trains every day to maintain his physical fitness. But with no matches, no competitions, no light at the end of the tunnel within reach, there is a lack of heart and soul.

"What hurts the most is the time that has been wasted which I could have spent on building my career. For pro fighters, we only have a limited number of years to reach our peak," said Sangarthit. "My goal is to become world champion but I don't know when I'll be able to re-enter the ring again."