China's official Purchasing Managers' Index (PMI), a key gauge of manufacturing activities, edged down to 50.4 in July due to equipment maintenance period and the impact of extreme weather in some areas, said the National Bureau of Statistics (NBS) on Saturday.

A reading above 50 indicates expansion in activities, while a reading below reflects contraction. The manufacturing PMI has remained above the 50 mark for 17 straight months. 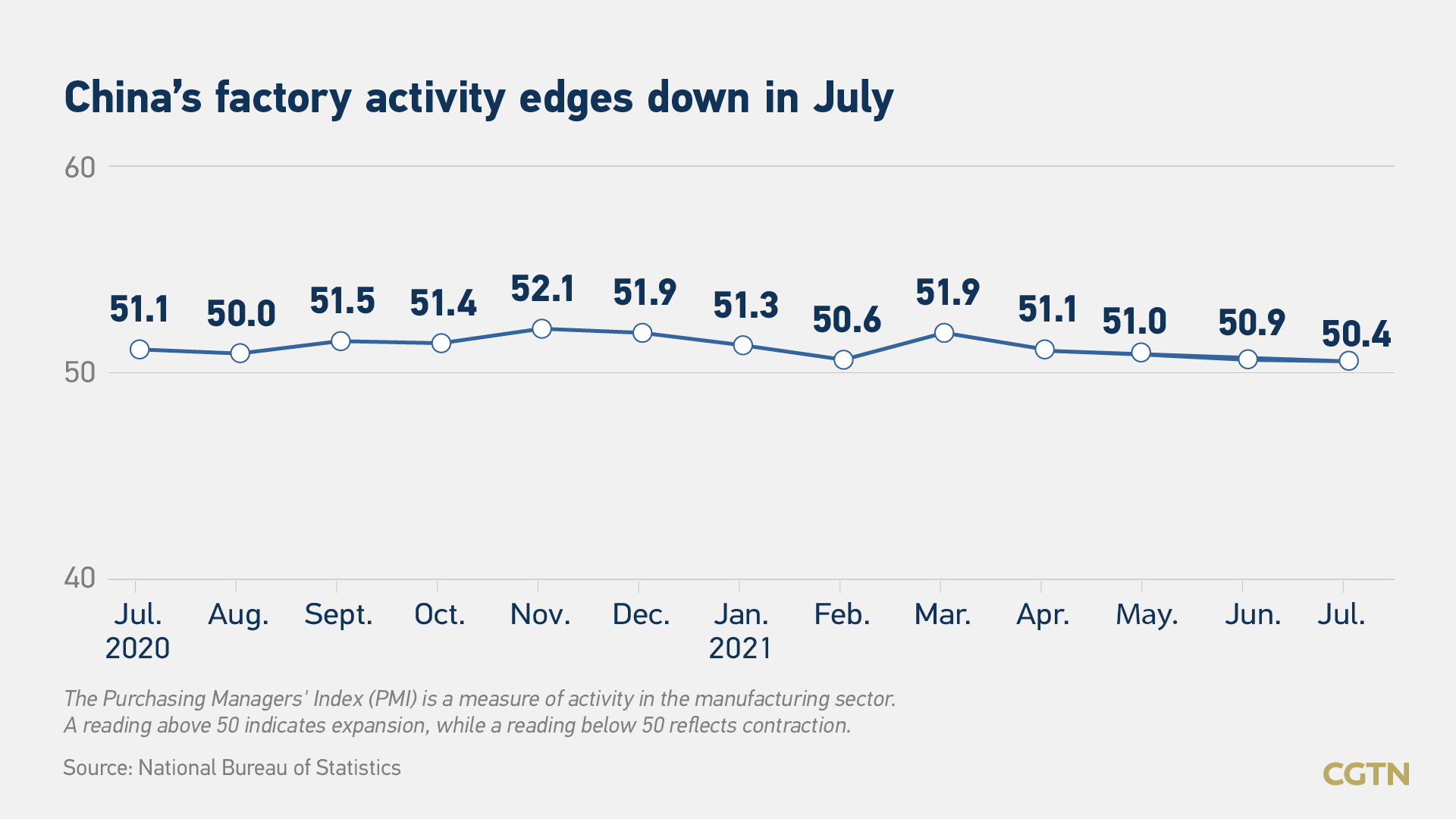 "Some companies have entered the equipment maintenance period, coupled with the impact of extreme weather such as high temperature and floods in some areas, the expansion of the manufacturing industry has weakened compared with the previous month," said Zhao Qinghe, a senior statistician with the NBS.

The production and demand have decreased notably in high energy-consuming industries such as petroleum, coal and other fuel processing, chemical raw materials and chemical products.

By firm size, the PMI for large enterprises surveyed was 51.7 percent, flat with last month, while small and medium-sized enterprises inched down to 47.8 percent and 50.0 percent, narrowing down by 1.3 and 0.8 percentage points from last month, respectively.

Some small and medium-sized enterprises surveyed reported that their production and operation are under pressure because of the cost increase of raw material, reduction in orders, and increased pressure on payment, said Zhao.

Lu Ting, chief China economist at Nomura, said July's decline was mainly led by the production and new orders sub-indices, which fell to 51.0 and 50.9 respectively, from 51.9 and 51.5 in June. Notably, the new export orders sub-index dipped further to 47.7 in July from 48.1 in June, reflecting weaker export momentum and perhaps disruptions in export shipments at some major ports in the Yangtze River Delta due to Typhoon In-Fa, he said.

Besides the maintenance and weather factors that the NBS pointed out, Lu attributed the PMI's drop in July also to factors including the COVID-19 resurgence caused by the Delta variant and China's tightening measures on the financing of the property sector.

China's official non-manufacturing PMI, which includes services and construction activities, edged down to 53.3 in July from 53.5 in June.

The non-manufacturing PMI was weighed on by the construction sector, which dropped to 57.5 in July from 60.1 in June, as the heavy rainfall and flooding in Henan and Typhoon In-Fa in the Yangtze River Delta constrained local construction activity, Lu said.

China's tightening measures on the financing of the property sector may have weighed on some property-related construction, he added.

In contrast, the PMI for service industry has increased, driven by summer vacation consumption and other factors. The business activity index of the service industry rose by 0.2 percentage points from the previous month to 52.5 percent, showing the recovery trend of the industry, said Zhao.

However, as the negative impact of the major factors on the services sector was not fully reflected in July's print, Lu said they expected a much more significant drop in the non-manufacturing PMI in August.