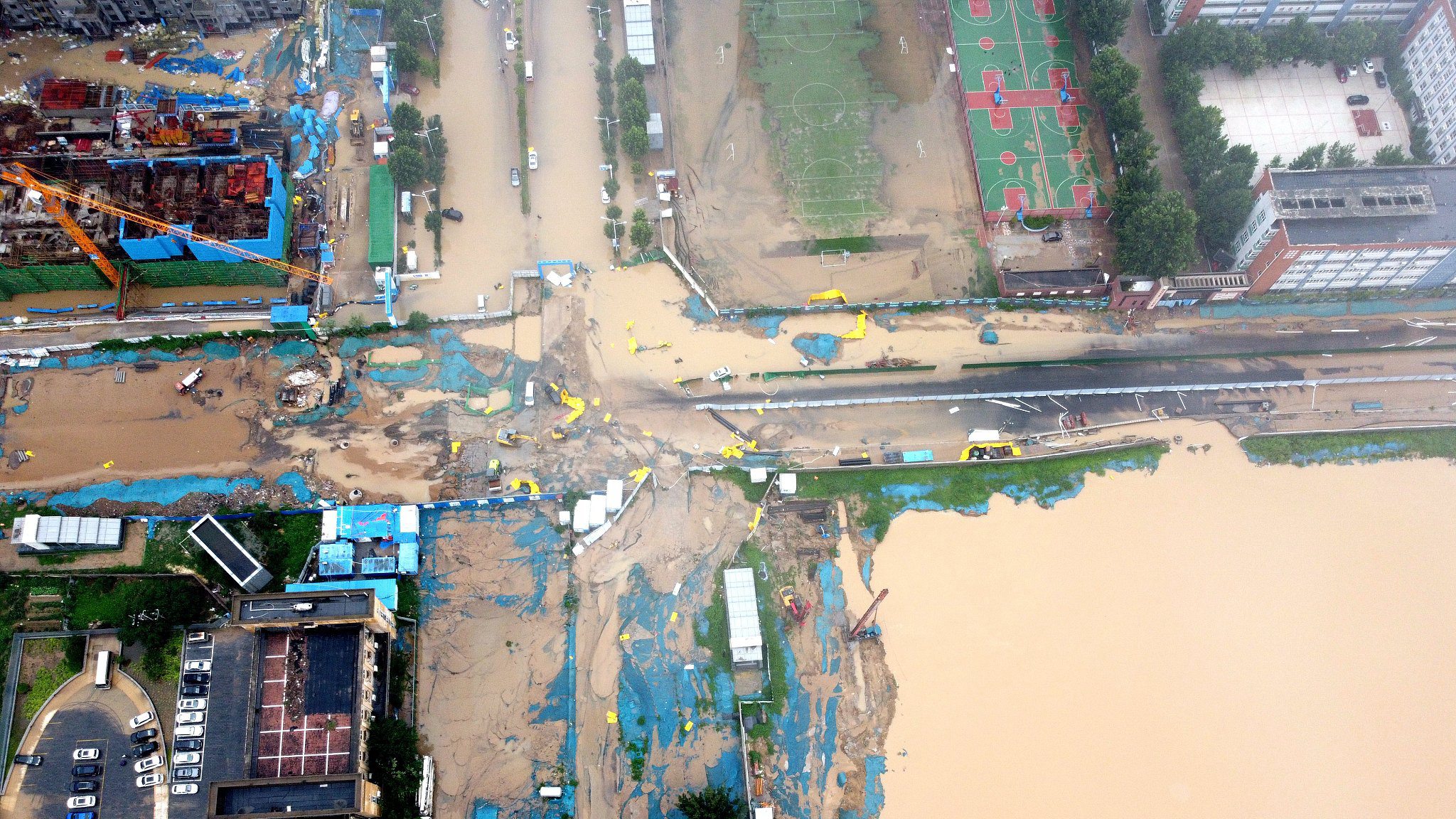 Editor's note: Ouyang Ruize is a research analyst at the Institute for Global Cooperation and Understanding (iGCU) of Peking University. The article reflects the author's views, and not necessarily those of CGTN.

China's inland Henan Province has been severely hit by torrential rains and floods since mid-July, with at least 302 people dead and a total of 14.53 million people affected (data updated on August 2). The heavy downpours in Zhengzhou, the capital of Henan Province, surpassed the extremum of hourly rainfall in record.

Promptly and resolutely, significant assistance has come from sectors, entities and individuals of the whole society, and cohesive efforts have been made in the work of flood control, victim rescue, and post-disaster restoration in various forces.

Among those forces, one exerting an indispensable role and serving as a strong shoulder is composed by a sequence of modern technological products. Empowered by science and technology, it can be seen that the precision of weather monitoring, the timeliness of emergency relief and the safety of people's lives at stake have been guaranteed to a greater extent than ever before.

Concerning the continuous cloudburst and the largish flooding, it is a Herculean task to grasp the magnitude and scope of inundation in a limited time through human-made inspection.

Shortly after the flood occurred, Fengyun-series satellites developed by China Aerospace Science and Technology Corporation (CASC) have been put into use to acquire space-based observation data for real-time situation analysis and subsequent disaster assessment.

FY-4B satellite, inter alia, launched two months ago and has undergone the test phase currently, was activated with the fast-imaging mode in high frequency to incessantly monitor the rainfall patterns and tendencies.

In addition, Gaofen-series satellites including GF-3 and GF-6 have also delivered necessary services to the Ministry of Emergency Management and on-site rescue teams in checking the local conditions and adjusting the relief work.

Apart from supply carriage and epidemic disinfestation, unmanned aerial vehicles (UAVs) could also perform in illumination and communication. Damaged by the floods, domestic water and electricity were cut off in many residential zones and the water supply plant of Zhengzhou City was in a burning need to be repaired.

As a breakthrough for 300-meter aerial work, the Tianshu-A8 mooring drone was deployed immediately to undertake a 24-hour duty on video observing and electrical lighting in aiding the pool-cleaning process on the night of July 22.

Meanwhile, Wing Loong 2H unmanned aircraft, a new "face" just officially unveiled this May and a senior "expert" in emergency communication, has productively coordinated in restoring the mobile communication network of 50 square meters. 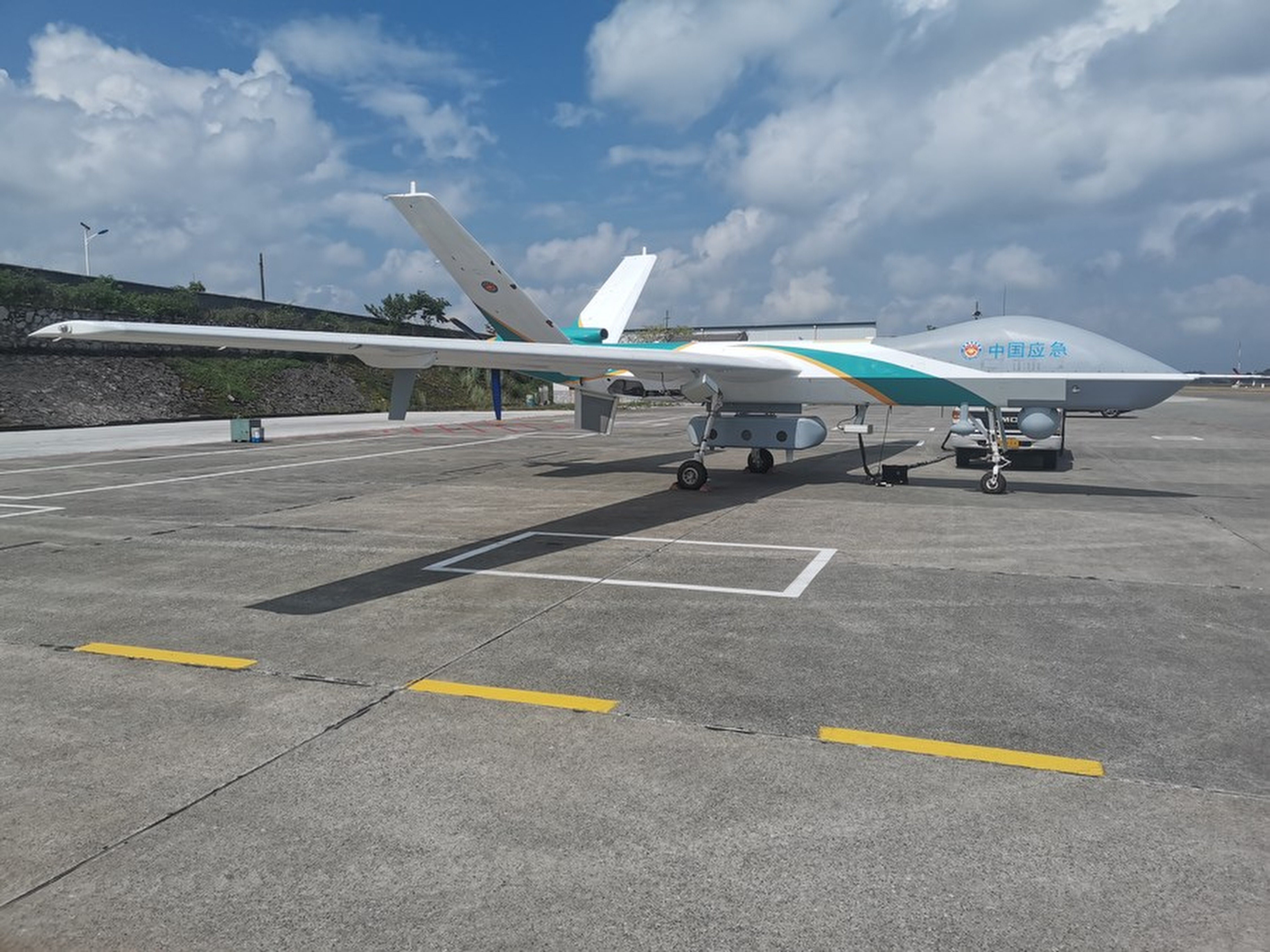 The Wing Loong 2H was sent to conduct damage assessment after the devastating floods in central China. /Xinhua

The Wing Loong 2H was sent to conduct damage assessment after the devastating floods in central China. /Xinhua

Enhanced interactions between humanity and technology

The Dolphin-1 surface rescue robot, a smart lifeboat that can bear two or three adults and reach three meters per second with no load, was transported to the deluge-afflicted areas and operated over water by a remote controller, allowing the rescuers to swiftly and accurately stretch out to the victims.

It is reportedly one of the most pioneering water-rescue apparatus designed by China State Shipbuilding Corporation Limited (CSSC), and can be utilized to tackle the ever-changing conditions and ensure the resettlement of the affected people, thus its also known as "the lifesaving bridge."

An online document shared by millions of netizens exhibits social solidarity in cyberspace.

A university student, originally from Henan Province, took the very first step to create an online table and collect information for both rescuers and victims.

Minutes later, a few "strangers" added their pleas, detailed the locations or volunteered to classify and verify the information. Hours later, it had forged a chain of transmission and drew umpteen netizens from all over the country to participate in the relay race against the clock.

Till the 24th hour after its creation, this document was updated to the 270th version with more than 2.5 million views and countless reposts.

From a small gathering of rescue demands to an enormous platform connecting multi-purpose and multi-resource, its only goal – to save people's lives and fight against the flood – has exemplified to the entire world that tech's for the social good.

Advancement of techs witnessing the development of China

The river of history will never forget when the flood catastrophes occurred in 1998, thousands of soldiers carried numberless sandbags on their backs and fended off the flow of debris with their bodies.

Today, a heart-wrenching flood disaster once again gave China an arduous test. Only this time the mass-crowd strategy was replaced by human-technology consolidation, which better assisted Henan Province to tide over hardships.

Technology not only supports poverty alleviation, green development and civil infrastructure, but also underpins the social and economic progress, not to mention its immense contribution to combating the COVID-19 pandemic, as China successfully isolated the world's first virus strain, completed viral genome sequencing, formulated and applied a billion doses of vaccines, and exported nearly half of its production to help over 100 countries.

It has proved a great sense of security and stability throughout this country, firmly corroborating the impregnable cohesion made by the Chinese nation in its indefatigable efforts to overcome any incoming challenges. And that torch of cohesion has been carried forward generation after generation for over five millenniums.

Over the past seven decades, China has attached great importance and demonstrated strong determination to scientific and technological innovation from a strategic and long-term perspective.

The 14th Five-Year Plan announced in March this year shed light on a comprehensive roadmap for technological advancement to reach new heights.

The inexhaustible momentum that China has poured into technological innovation anchors its irreplaceable strengths in leading global technical cooperation, which will further contribute to the global economy and multilateral governance sailing towards a more promising, prosperous and shared future for all humankind.