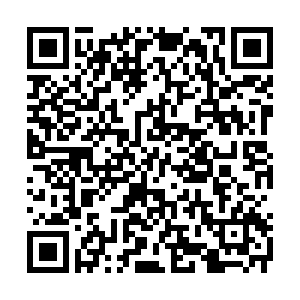 The moment Italy's Gianmarco Tamberi and Qatar's Mutaz Essa Barshim decided to share the gold medal in the men's high jump at the Tokyo Olympics must have caused tears to flow.

The pair had both braved injury that almost ended their careers. On August 2, they face the choice either to go on competition to decide the top two places of the event or to share the top honor.

After the officials granted them their request, the two athletes found themselves locked in a passionate embrace.

In the shadow of a pandemic, the scenes of Olympians hugging each other feels extraordinary.

In the lead-up to zero hour, the fate of Tokyo 2020 was mired in postponements, scandals and mistrust. Seeing their hopes being raised and dashed time and again, participating athletes were left in a tough emotional state, while the spectators grew increasingly indifferent. With the Olympic flame finally burning, hope filled the hearts of the athletes and their fans. 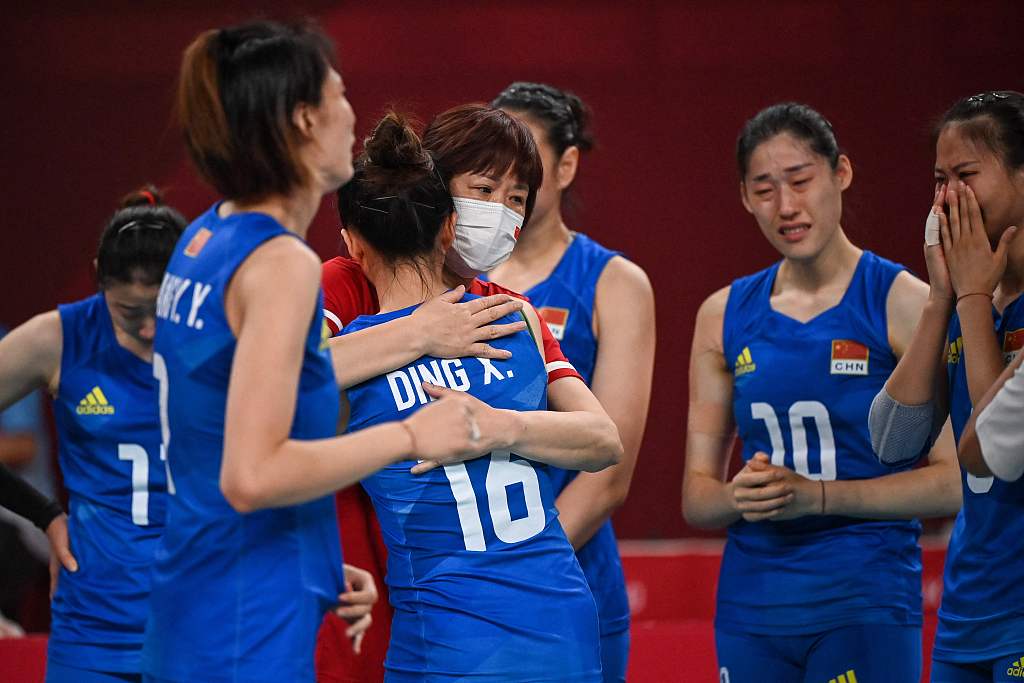 Lang Ping (in red), coach of Team China's women's volleyball team, hugs players after a match between China and Argentina during the Tokyo 2020 Olympic Games at Ariake Arena in Tokyo, Japan, August 2, 2021. /CFP

Lang Ping (in red), coach of Team China's women's volleyball team, hugs players after a match between China and Argentina during the Tokyo 2020 Olympic Games at Ariake Arena in Tokyo, Japan, August 2, 2021. /CFP

At the Games, hugs have always been ubiquitous, generously dispensed to comfort, encourage and celebrate victories. But more often than not, embraces have been an expression of the multitude of feelings bubbling up inside athletes, creating this urge for the warmth and support of another body. Whether it came from a longtime teammate or a rival from a few seconds ago, it mattered little.

The Chinese women's volleyball team suffered a serious setback in Tokyo. The defending champions from Rio Olympics didn't go past the quarterfinals. When Lang Ping, the head coach and the sport's most decorated figure in the country, started hugging and comforting the players devastated by the knockout, tears were flowing on the sidelines. The pain of loss had found a way out not only for the team members, but also for their fans in front of the TV screens. 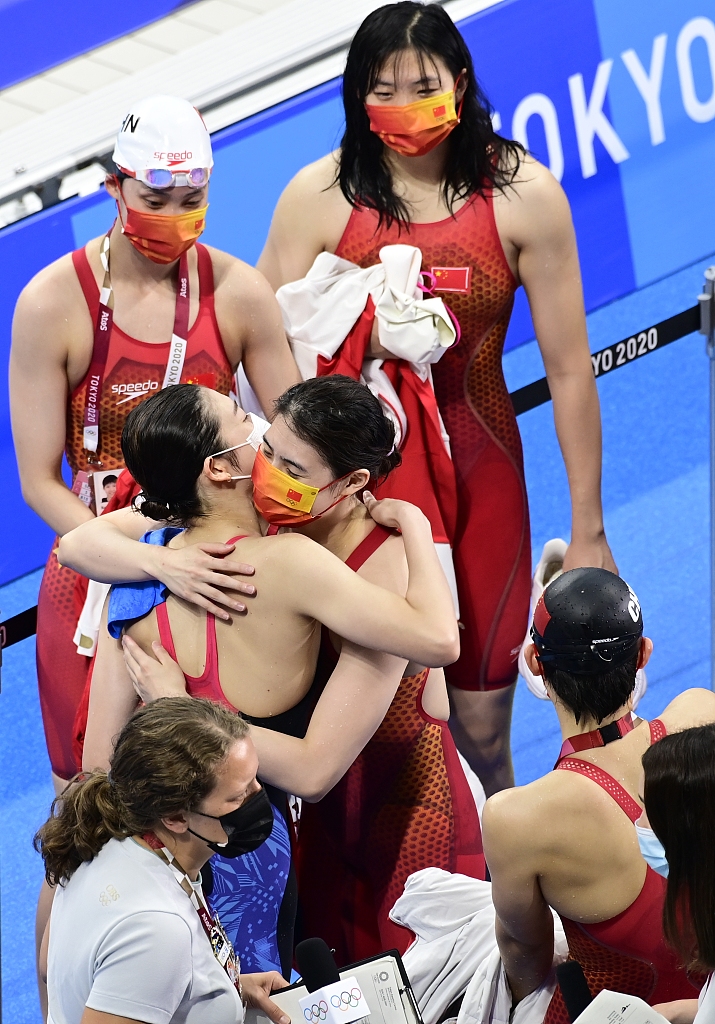 True sportsmanship is crystallized through the respect, caring and appreciation that one Olympian exhibits for another. It never fails to touch the public no matter how complicated the situation is outside the Olympics venue.

A clip of Chinese swimmer Zhang Yufei greeting her Japanese counterpart and cancer survivor Ikee Rikako with a hug at poolside following the women's 4x100m medley relay has moved many on Chinese social media to tears, despite the recent tensions between the two countries.

The tears shed both inside the empty-seated venues in Tokyo and in front of TV screens around the world are driven by universal feelings that are not exclusive to any one country, race or religion. At any other time, these sentiments could have easily been expressed through a hug, a kiss, a handshake, or simply a pat on the shoulder. But these are not normal times and the COVID-19 pandemic has deprived many of communicating using body language over the past 18 months, severing the human connection in its most basic form, and making the sight of a pair holding each other under the Olympic flag even more moving.

In our modern life, reason takes center stage and feelings are suppressed to various degrees. But it should be indisputable that the expansion and execution of reason and knowledge must be oriented towards maximizing happiness that naturally consists of love, caring and respect. All these are forces that pull us together instead of driving us apart – the pandemic had done enough to the latter, it certainly doesn't need any more help.

Unfortunately, the principle is not well heeded enough. The global health crisis has become a catalyst for blame games that are rooted in social and economic inequality and geopolitical mistrust. The pandemic has already contaminated the air for hugging as we like. The geopolitical atmosphere seems to make it even harder.

In a world that had never been divided along so many lines as it is today, the delayed Tokyo Games, together with the passion it has brought to us could be a good reminder that by nature we still crave human bonds far more than isolation. The addition of the word "together" to the Olympics' motto attests to that, but more fundamentally the spontaneity with which the players hugged each other and the warmth the scenes evoked instantaneously in our bodies is all the proof one needs.

The heart-warming hugs are expected to come back during the Winter Olympics starting next February in China. It'll be another opportunity for the world to suspend a divisive mentality and enjoy sticking together to realize our potential as humans.

After that we'll have to wait for another two years and more until the Olympic flame burns in Paris.

Hopefully by then we would have gathered more reasons to hug rather than push each other away.