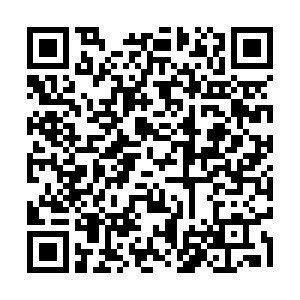 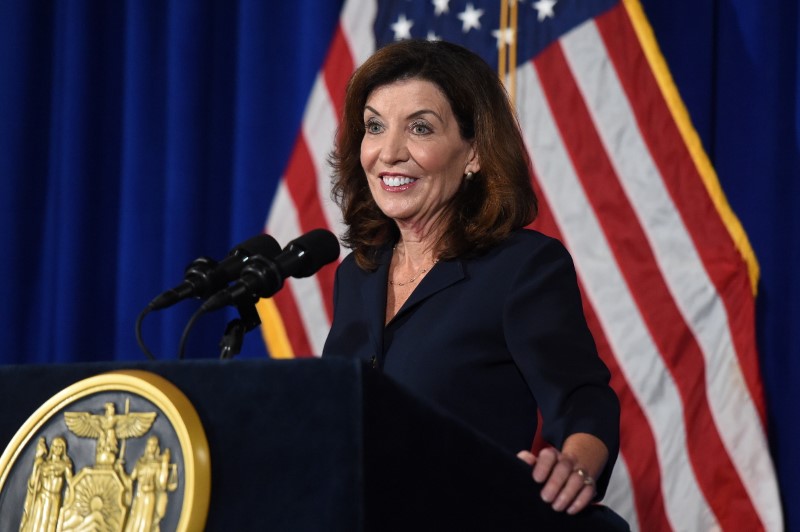 Kathy Hochul has rarely been headline news – but that changed when she took to the podium at the State Capitol in New York on Wednesday.

In less than two weeks, the 62-year-old lieutenant governor will succeed Andrew Cuomo and become the first woman to lead the state. 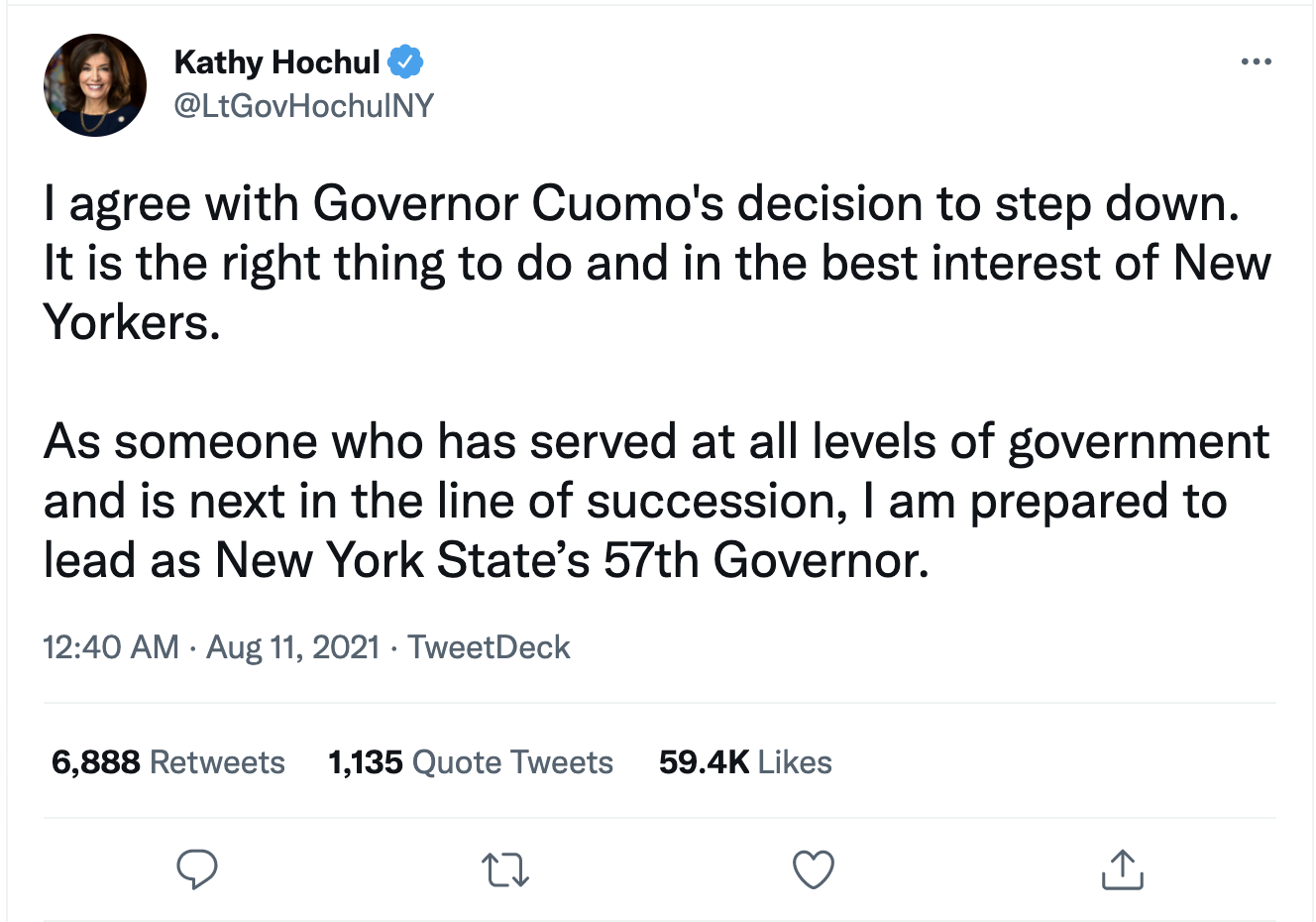 "While it was not expected, it is a day for which I am prepared," Hochul said in her first news conference since Cuomo's resignation announcement, adding that they had talked on Tuesday to try to ensure a smooth transition.

Cuomo has been under public pressure since a months-long sexual harassment investigation began. He stepped down after a 165-page report released August 3 by the state attorney general Letitia James concluded that he sexually harassed 11 women. 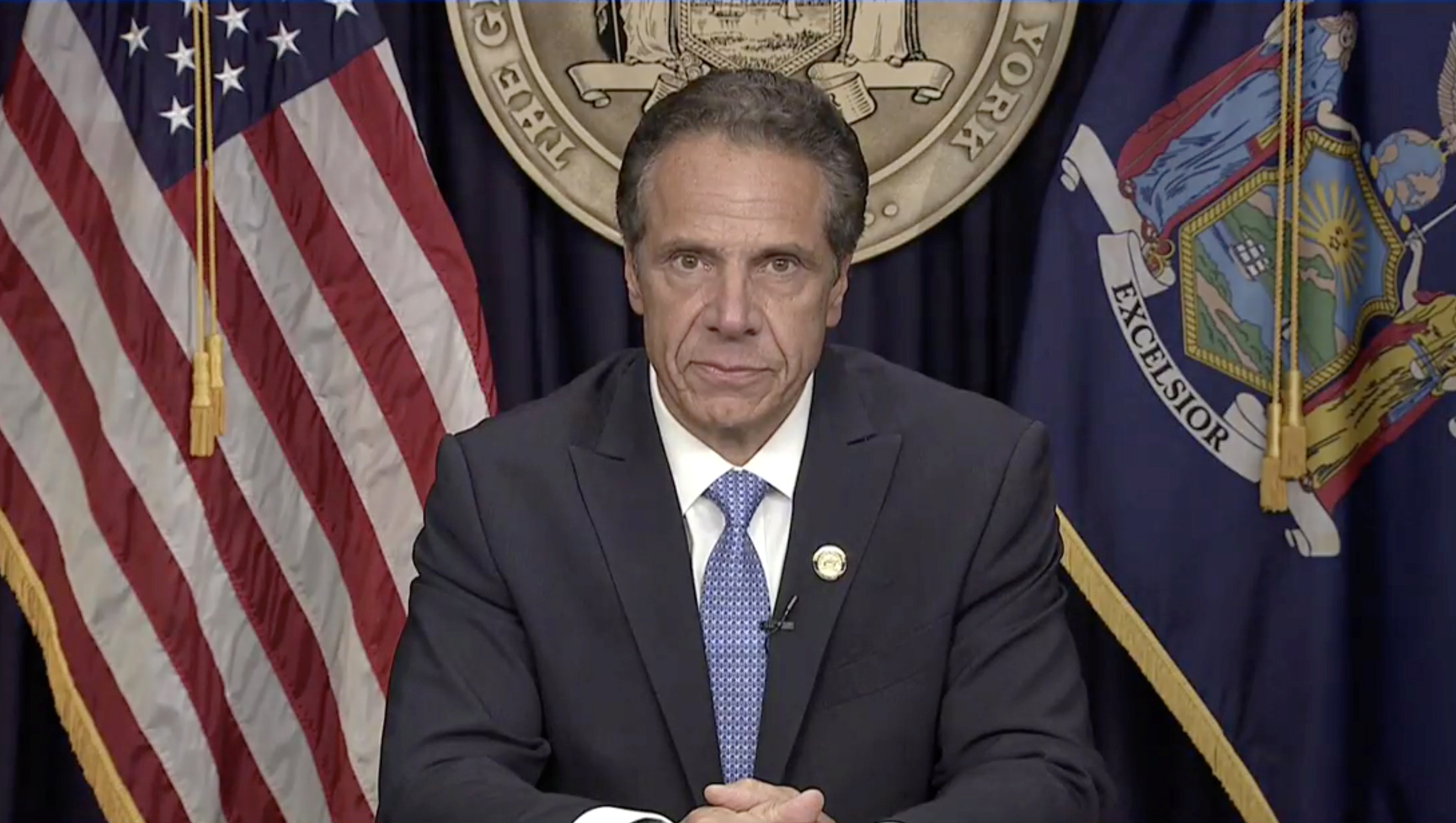 Hochul described the governor's alleged behavior as "repulsive & unlawful" and said the Assembly will determine the next steps. 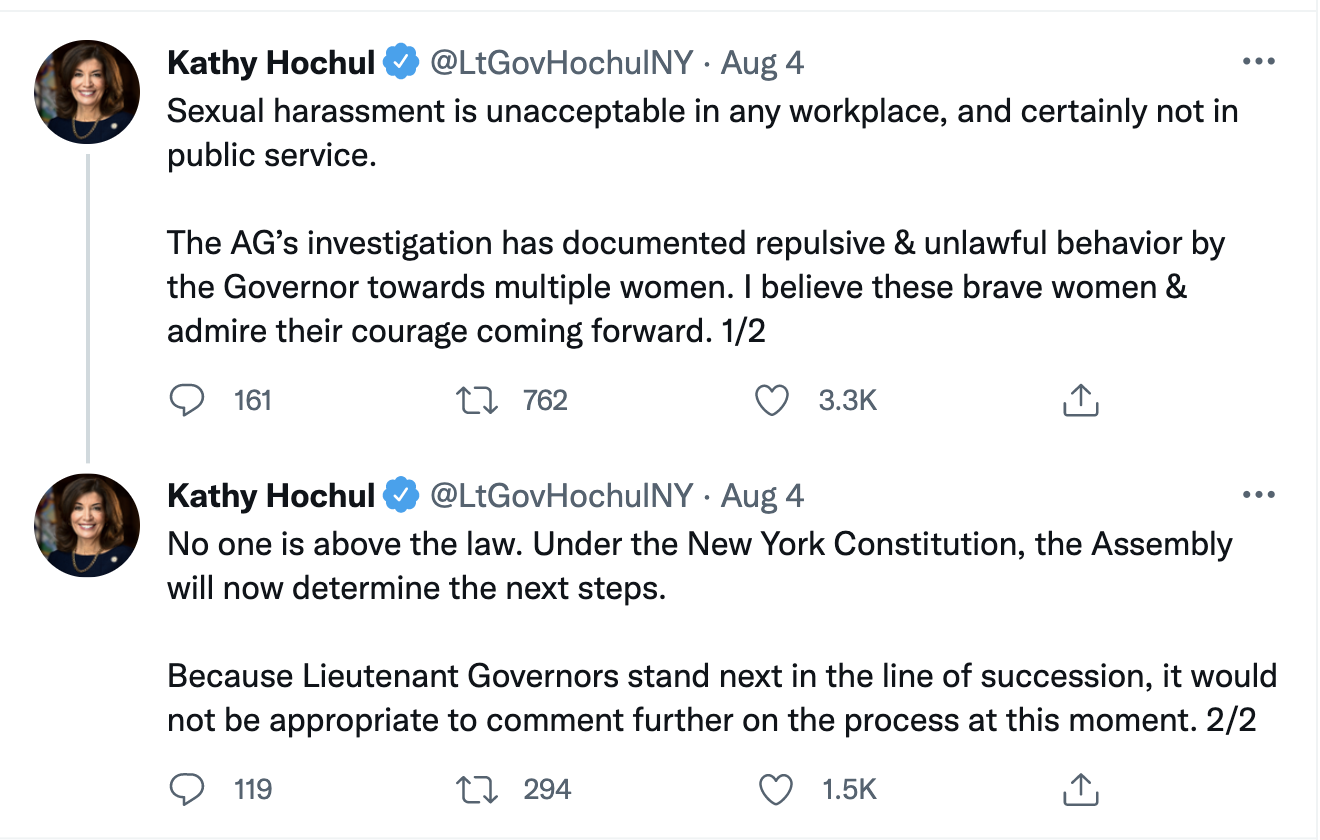 Hochul stressed that she does not have a close relationship with Cuomo, despite being his running mate. She has tended to stay in the background, and did not appear in Cuomo's award-winning press briefings at the height of the COVID-19 pandemic. 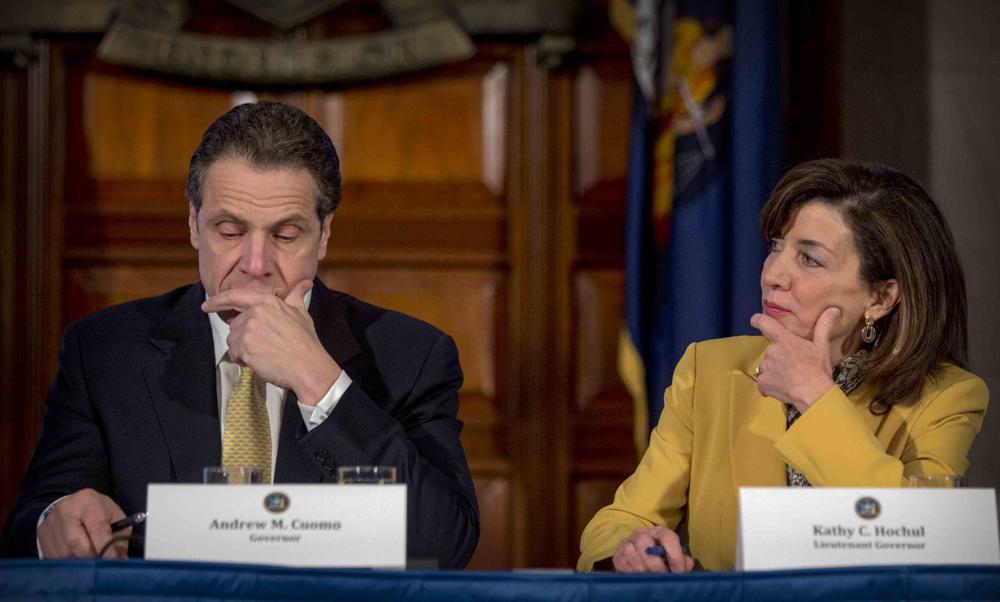 A teenage politico, a seasoned veteran

Kathy Hochul may not be a household name, but she is no stranger to American politics.

When she was in high school, she regularly took a bus downtown and volunteered at the local Democratic Party headquarters during summer vacation. She was the youngest and the only female in the room. During college years, she engaged in debates and ran for vice-president of student government. She spoke up for students and once led a boycott of a bookstore that began charging high prices. When she interned at the New York State Assembly, she met her future husband, Bill Hochul, who later served as the U.S. attorney for the Western District of New York.

After finishing her postgraduate study in law, Hochul started working for a Washington law firm, then moved on to Capitol Hill as an aide to former U.S. Representative John La Falce and U.S. Senator Daniel Patrick Moynihan.

She held her first public office as a member of the Hamburg Town Board in 1994. In 2003, Erie County Clerk David Swart hired Hohul as his first deputy. When he left office in 2007, Governor Eliot L. Spitzer appointed Hochul as Erie County clerk.

Hochul took part in an election in the most Republican congressional district in 2011 and surprisingly won as a Democrat. But she lost the redrawn district in 2012 in a very close race against Republican Chris Collins. In 2013, M&T Bank hired her to work in government relations. The bank president said she brought a broad range of government knowledge to the company.

These experiences came in handy after she was elected lieutenant governor of the state as Cuomo's running mate in the 2014 gubernatorial election. They were sworn in on January 1, 2015 and reelected in 2018. 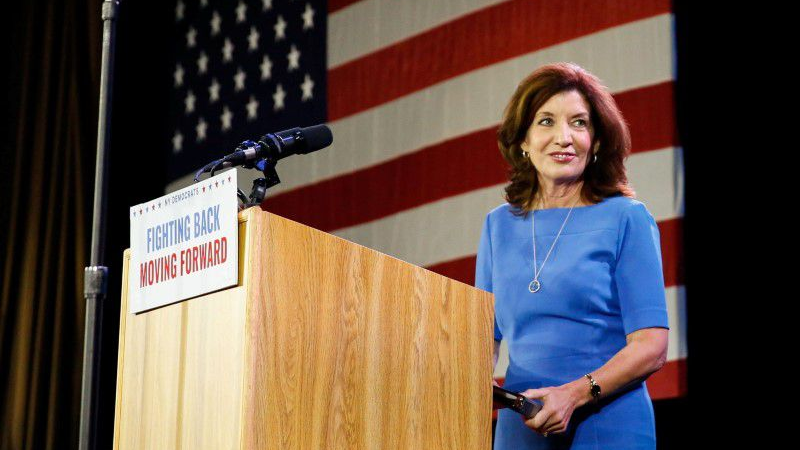 "Of all the levels of government I've worked in, I'm really finding that this one has a very direct impact on the most of our people," said Hochul in 2018. "That's why I want to do it, again."

An Irish-American Spirit, with an eagerness to serve

Hochul was born in a blue-collar Irish Catholic family in Buffalo, New York in 1958. Her grandparents were Irish immigrants who fled poverty. In an article, Hochul recalled two pictures in the room that left her a deep impression. One was Jesus Christ, who she said always cared for the poor and homeless, the other was John F. Kennedy, the first Irish-American President. "Although it may not be apparent from my name," said Hochul, "I actually was christened Kathleen Mary Courtney, making me the highest Irish-American State elected official in New York."

Her father, Jack Courtney, worked in Bethlehem Steel plant at night while studying for a college degree during the day. Her mother Patricia stayed at home and raised six children.

As a child, Hochul never needed to look far for inspiration. She has described on Twitter how she was inspired by her father, who was born to poor Irish immigrants, lived in a trailer, but eventually rose to head his own IT company with a college degree and hard work.

Her mother, as a longtime member of the Hamburg community, organized day camps and food drives for the needy. She founded a neighborhood association to provide migrant workers’ children temporary stays, and also ran a local flower shop for 15 years and employed displaced homemakers.

"I wanted my children to grow up and be happy and successful," she said. "But more importantly, I wanted them to give back to others." 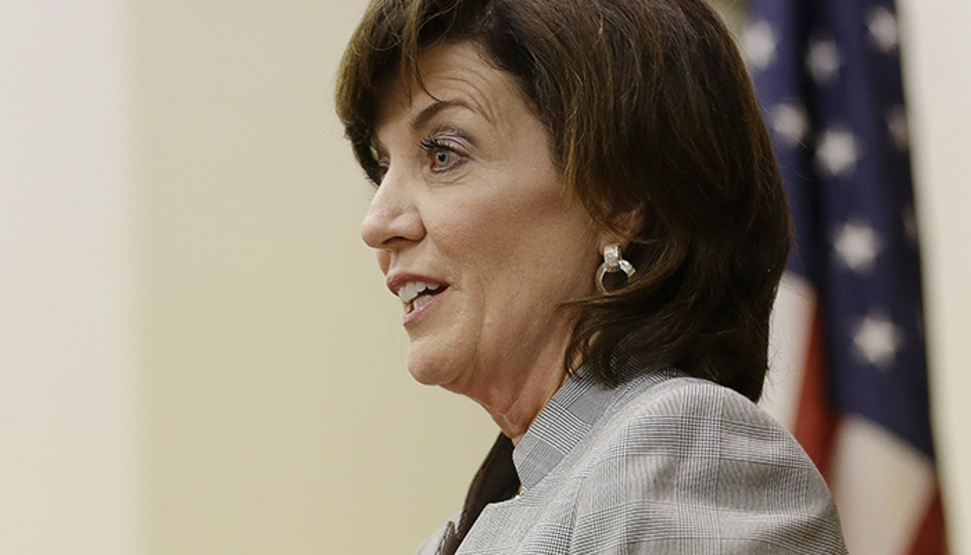 Instilled with a sense of moral responsibility to give back by her mother, she always has fought for the rights of women and the LGBTQ community. In 2006, she joined her mother and aunt to establish Kathleen Mary House, a transitional home for domestic abuse victims. It was a shelter for those who felt helpless at the time, just like her mother’s flower shop.

In an interview with Politico, she said her grandma was a survivor of domestic abuse, who left her marriage at a time when divorce was uncommon in the conservative Catholic community in rural western New York in the early 1940s. It prompted her to advocate for victims of domestic violence. She also led the governor's "Enough is Enough" initiative to combat sexual assault on campus.

In 2020, she announced a $40.2 million federal grant to improve prekindergarten and child care services. She said she used to get a lot of food stamps and rent assistance until she could pay for herself, and she's been looking for opportunities to help these families.

Since the paid sick leave law started in 2021, workers in New York can use sick leave to recover from illness or care for others without worrying about being fired. "No one should have to choose between going to work sick or caring for a sick loved one and not getting a paycheck," Hochul said in a prepared statement, "especially as we continue to battle the COVID-19 pandemic." 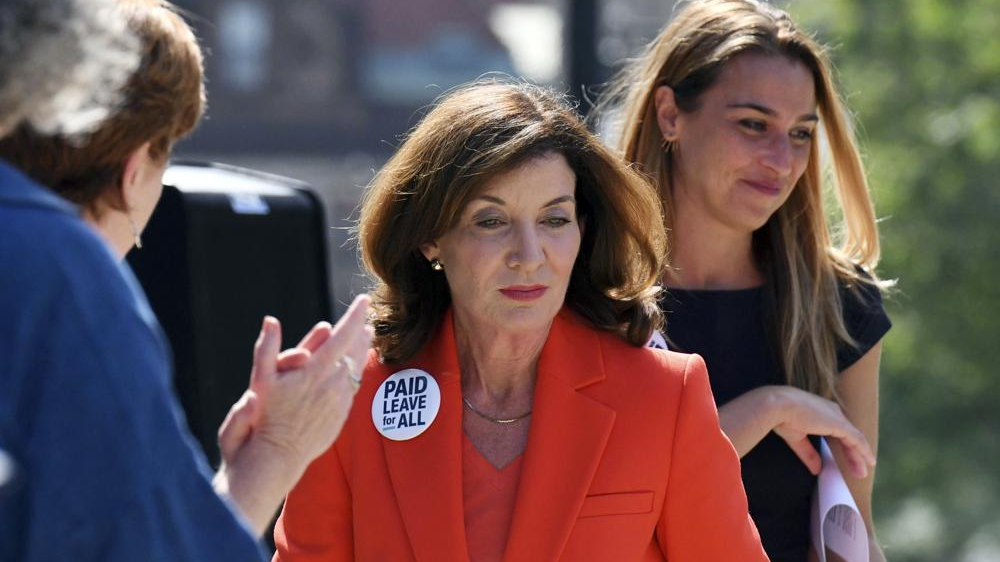 Kathy Hochul joins advocates for paid family and medical leave for all working people during a stop on the Paid Leave for All's national bus tour, New York, August 3, 2021. /AP

Kathy Hochul joins advocates for paid family and medical leave for all working people during a stop on the Paid Leave for All's national bus tour, New York, August 3, 2021. /AP

Since joining the Cuomo administration, Hochul has engaged in a frenetic travel agenda. She travels to all 62 counties in the state every year, dedicating herself to local communities, from visiting distant coffee shops and solving traffic problems to protect motorists to announcing a $10 million job training fund in Utica. 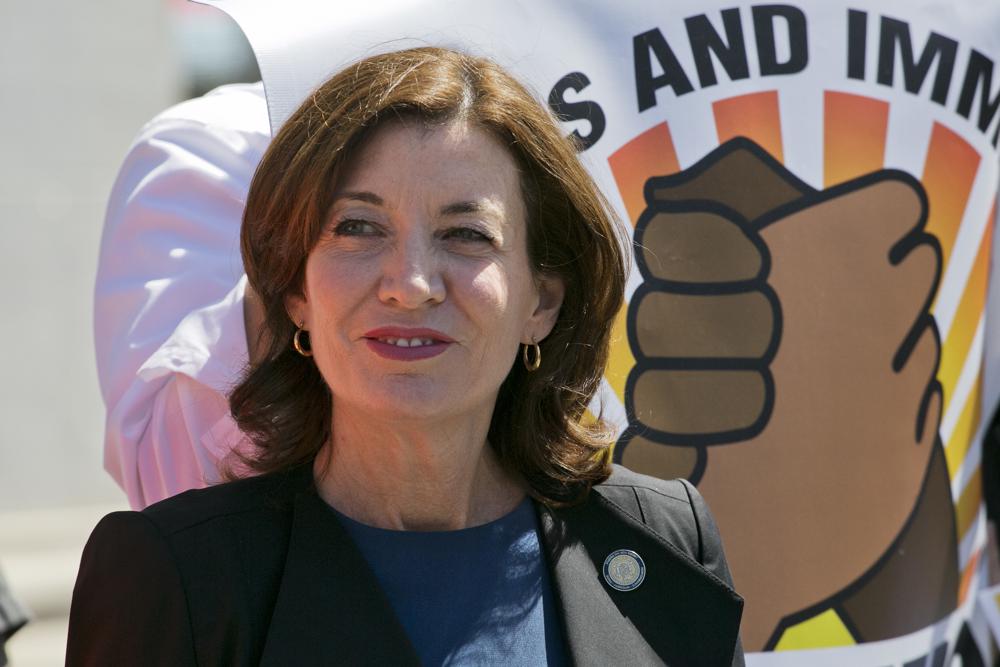 Hochul said she would continue meeting potential cabinet officials and building up her senior staff over the next two weeks. State Senate Majority Leader Andrea Stewart-Cousins will act as lieutenant governor before she chooses her own. Hochul said during an appearance NBC's The Today Show that she plans to seek election for a full term next year.

But the path might not be smooth at a time of uncertainty.

With the Delta variant surging and millions of children heading back to school, the incoming governor said there will be a mask mandate if needed. She is poised to tackle other pressing issues like keeping tenants from being evicted and fostering economic recovery.