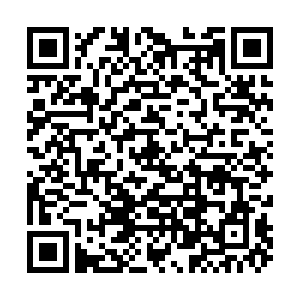 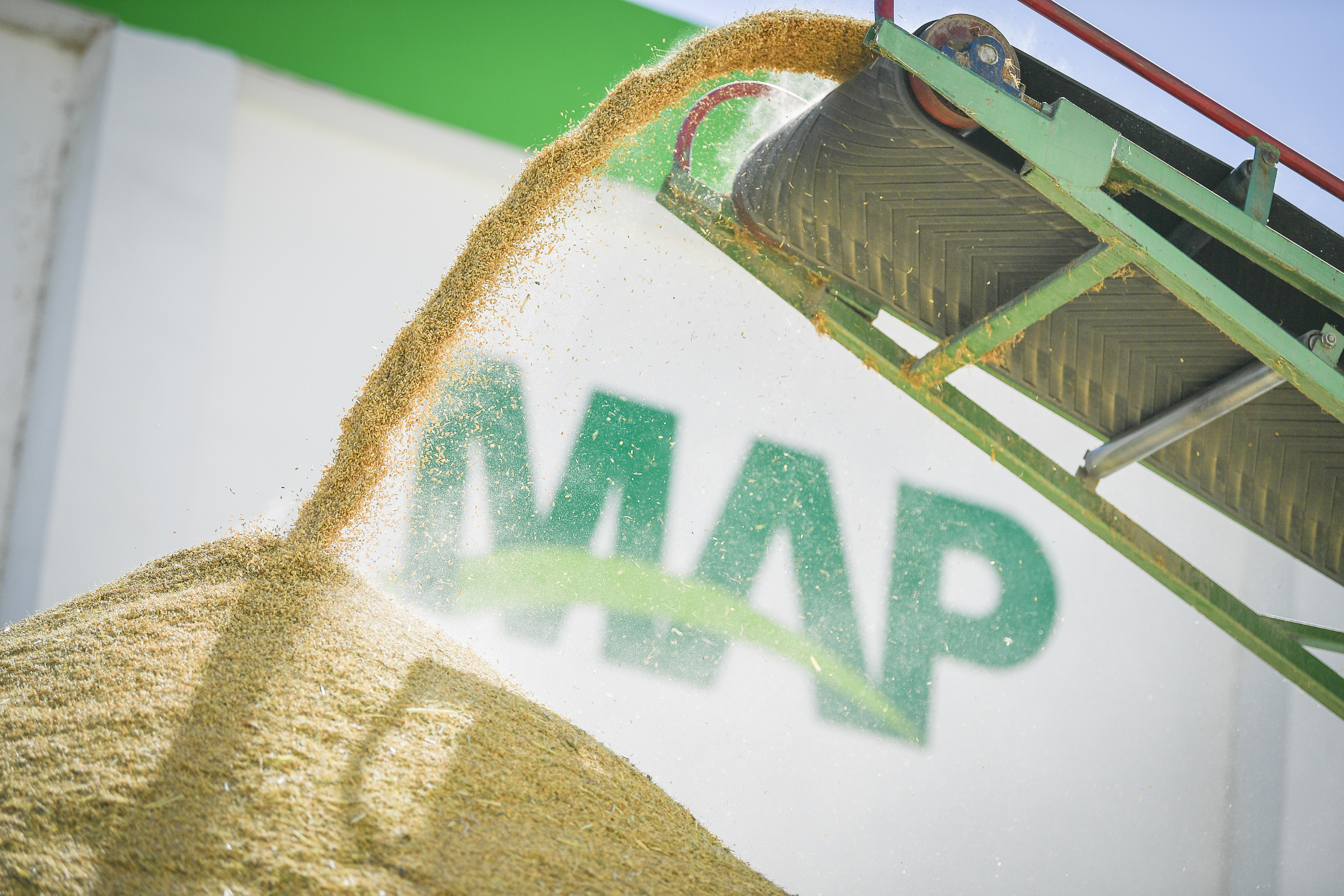 Launched by Sinochem in 2017 and now part of agrochemical giant Syngenta Group, Modern Agriculture Platform is the largest digital agriculture project in China. /Courtesy of Syngenta

Launched by Sinochem in 2017 and now part of agrochemical giant Syngenta Group, Modern Agriculture Platform is the largest digital agriculture project in China. /Courtesy of Syngenta

For the first time, Shao Qinglang, 33-year-old farmer from Miaoji Township, east China's Anhui Province, harvested over 550 kilograms of wheat per mu (666.7 square meters) in his 200-mu (13.33 hectares) farmland this summer, some 100 kg per mu more than last year, after having plowed the field for over nine years now.

What helped Shao attain the bumper harvest is an agricultural project he recently signed up for: Modern Agriculture Platform (MAP). Launched by Sinochem in 2017 and now part of agrochemical giant Syngenta Group, the digital platform offers a wide range of services to growers who want to increase their crop yields and quality.

Farmers who join MAP receive visits from agronomists who advise them what to plant, teach them how to grow their crops scientifically and provide them access to consumers, making life much easier for them and helping them increase income. With MAP's free crop monitoring app, farmers can also keep an eye on their fields.

"It's a perfect deal," Shao told CGTN. "Even with all these additional services, I end up saving my costs rather than spending more."

Many farmers like Shao are reaping the rewards of a burgeoning agricultural model that's transforming China's crop farming industry. In April, MAP services had reached 529 counties across 28 provinces, and nearly 400 MAP centers had been built to provide services for over 11.6 million mu of land. 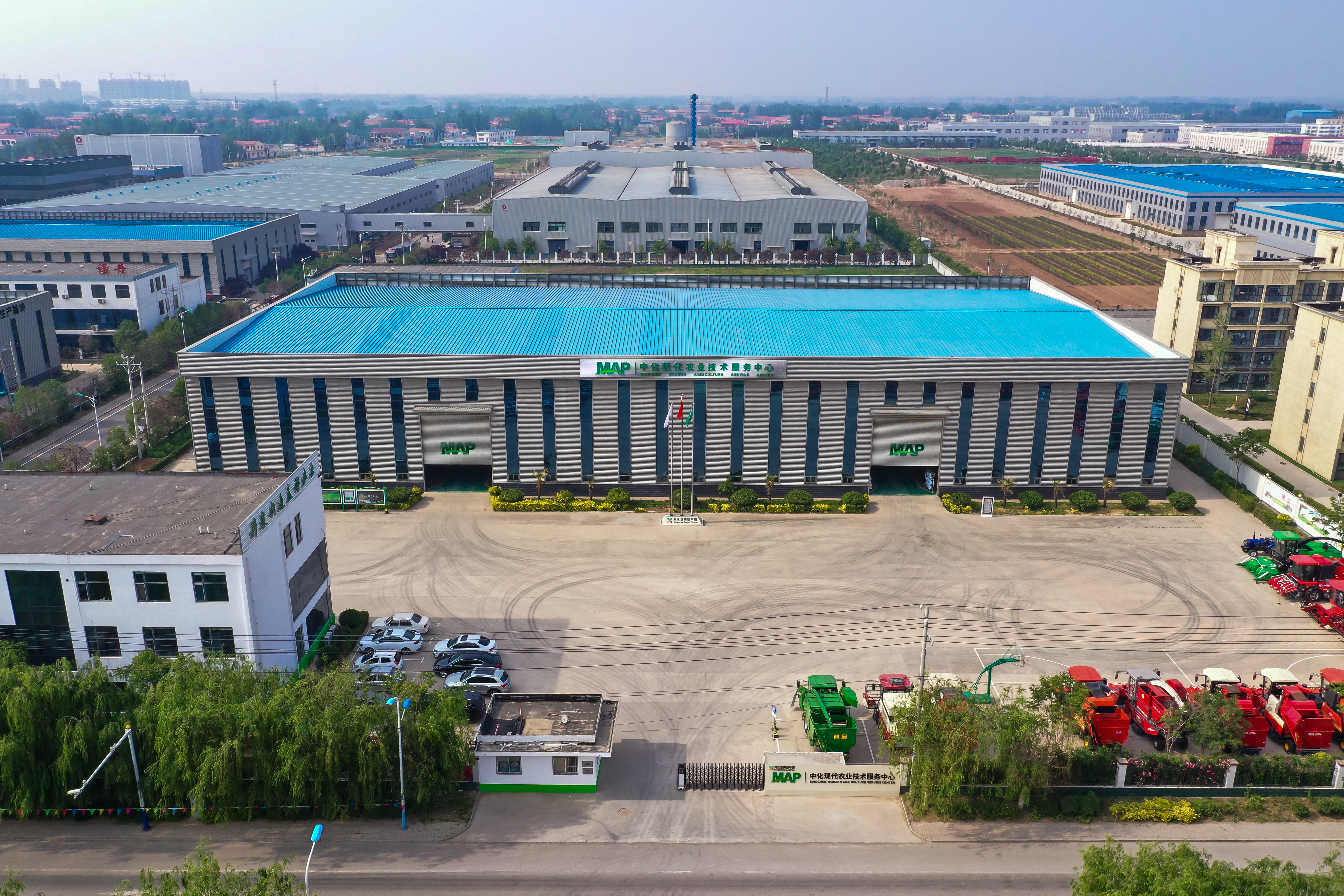 An aerial view of a MAP center in Weixian County, Hebei Province, China. /Courtesy of Syngenta

An aerial view of a MAP center in Weixian County, Hebei Province, China. /Courtesy of Syngenta

Partly driven by China's strong need to scale up crop yields, which lag far behind developed economies, Chinese agrochemical producer ChemChina acquired Switzerland-based Syngenta AG in 2017. After a restructuring last year, the new Syngenta Group is currently in the middle of an IPO in Shanghai. Its prospectus shows 12 percent of the $10 billion it plans to raise will be used to fund MAP's expansion.

Syngenta is not the only firm aiming to capitalize on this new undertaking. With Beijing's resolve to promote digital agriculture becoming clearer in the last three years or so, many startups and venture capital funds have ventured into the sector, vying for a slice of the huge and relatively untapped market.

"The overall drive to digitize crop farming is at a very early stage," You Liangzhi, senior research fellow at International Food Policy Research Institute, told CGTN. "Most of the companies have not yet made their platforms profitable. But government incentives have played a big part in facilitating their growth."

Beijing-based Kebai Sciences is one of the smaller agri-tech firms riding the wave of this nationwide campaign. With prize-winning smart farming systems, the company has been awarded the tender to operate dozens of demonstration projects across the country and abroad, but profit-wise it has not yet established something sustainable. 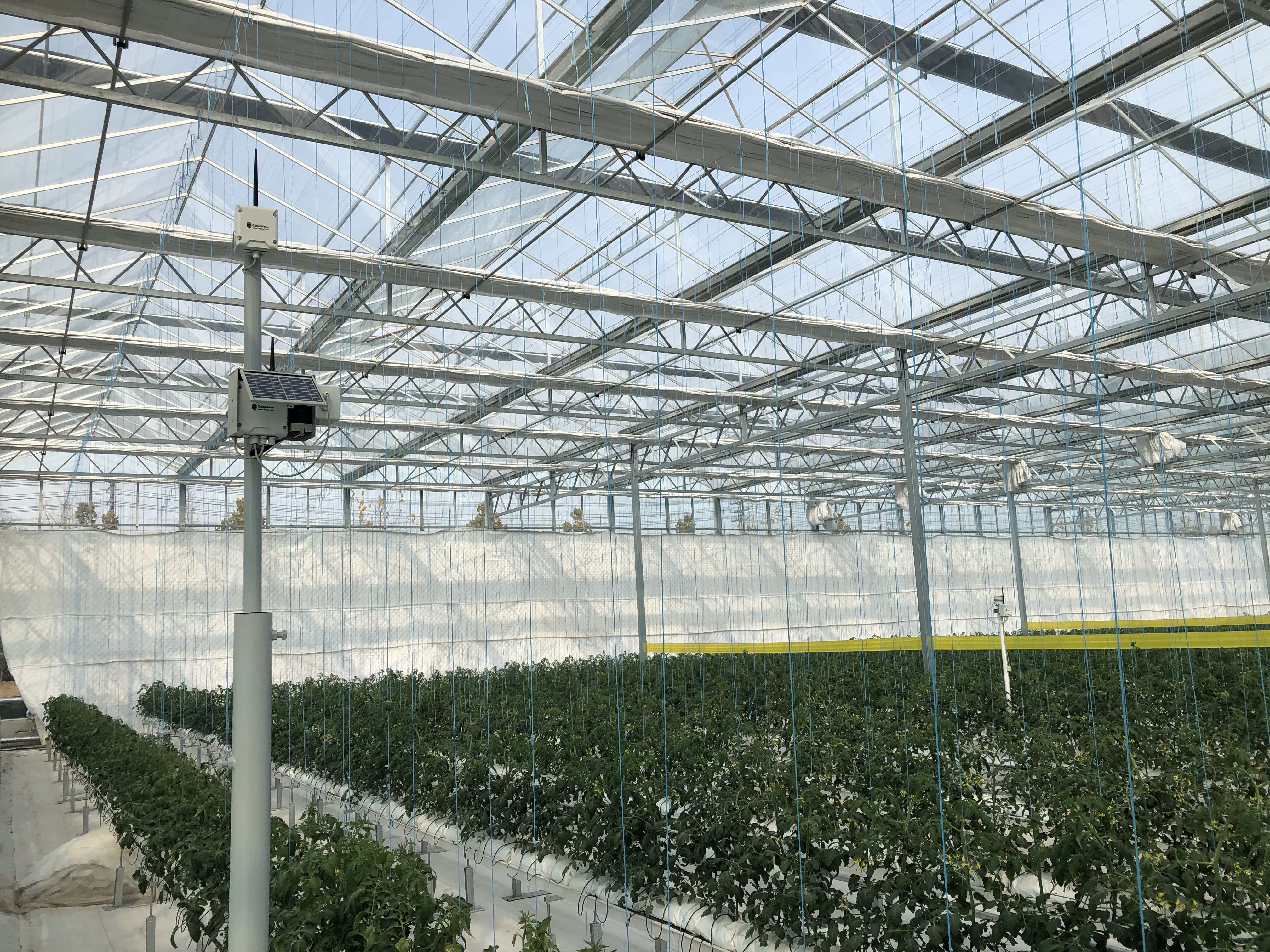 Kebai founder and CEO Liu Zongbo said he is trying to usher in a new business model that would help grow the company's revenues substantially.

Many brands in the food industry need to ensure they can receive quality and stable supplies from crop farming businesses, but many of these farms find it hard to guarantee that, Liu told CGTN.

"And this is where we come in. We customize our crop cycle models for each farm, and through our digital platforms, we help them manage costs and stabilize harvests."

Liu envisions for Kebai something similar to Syngenta's off-the-shelf business model. Maintaining supply chains for food processing plants, supermarkets and e-commerce platforms such as Alibaba's Hema is a major source of income for Syngenta's MAP operations.

Unlike Kebai, which focuses exclusively on crop cultivation techniques and sees its farming models as its niche, Syngenta leverages on its core products of seeds, pesticides and fertilizers to farmers while trying to establish an ecosystem to bring one-stop solution for them.

Another MAP participant, Gong Xue, 37-year-old corn farmer from Lishu County, northeast China's Jilin Province, said he gets real-time updates on his farmland from Syngenta's smart farming app, which is supported by geographic information systems (GIS) remote sensing. It helps him save time, avoid mistakes and locate problems in the field, but fertilizers and pesticides offered by Syngenta Group are what really make a difference in terms of crop production.

MAP's crop monitoring app shows a chunk of farmland singled out for its holder. /Courtesy of Syngenta

MAP's crop monitoring app shows a chunk of farmland singled out for its holder. /Courtesy of Syngenta

"Syngenta products are priced above regular ones in the market, but they are the ones that never failed me," he said.

Agri-tech companies like Kebai employ their own specialties to stand out of the rising competition. Precision farming is how the firm brands itself. It installs sensors, irrigation emitters and other automated devices that are all connected to a smart system exclusively calibrated for each crop and farmland.

"Our strength is that we know very well about farming. We have access to experts and rich experience in growing crops," said Liu who has studied agronomy for 30 years and based his company on the campus of the Chinese Academy of Agricultural Sciences, the country's top research institution in agriculture.

Liu thinks his company's sensors allow for better precision farming than those using GIS technologies, but automatizing entire fields is not always cost effective. "To generate profits, we mostly work on crops with high added value," he said. The same also applies to Syngenta's MAP and other tech firms new to the market, which provide similar services to farms planting cash crops. 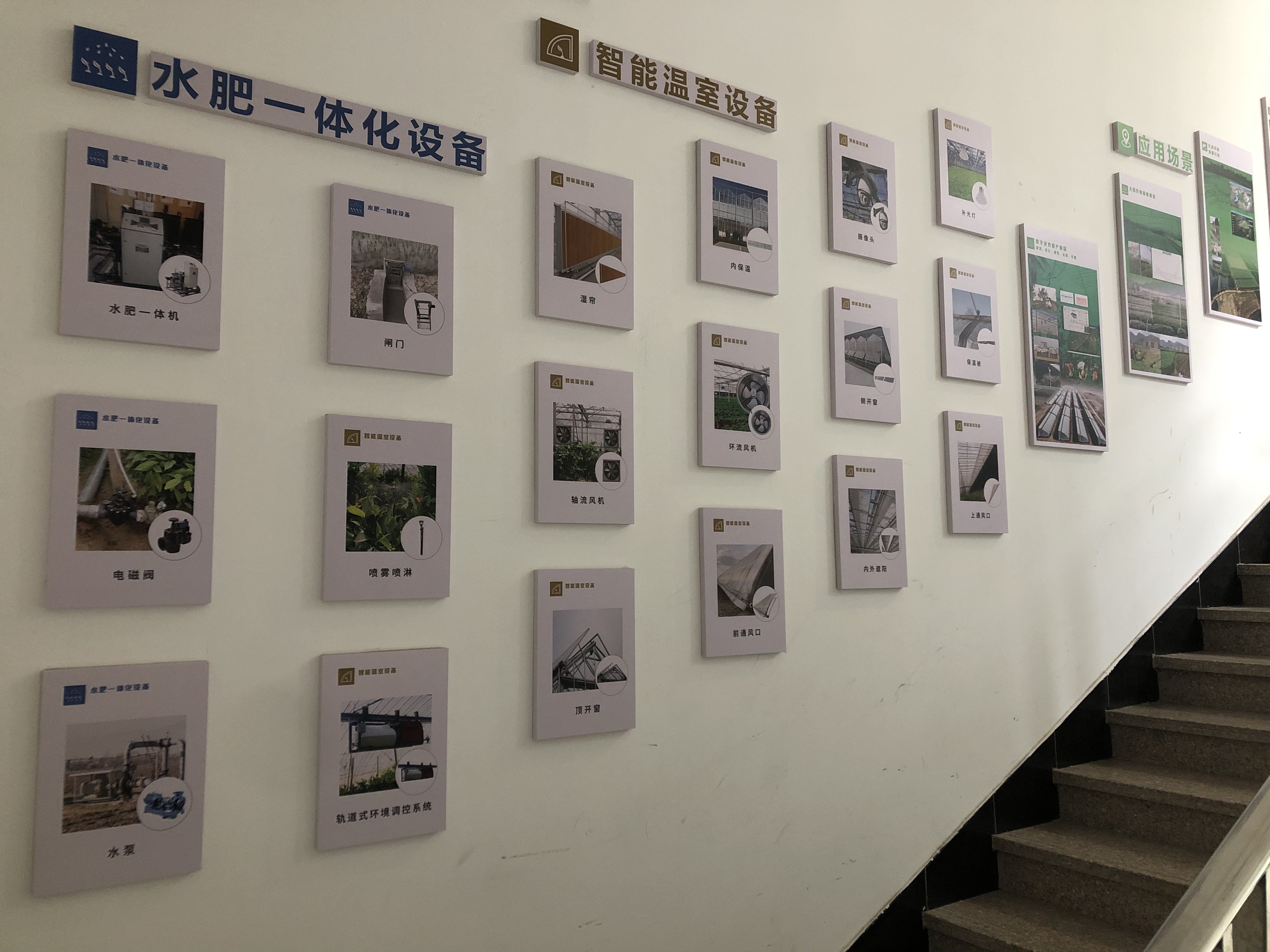 Photos of Kebai's automated devices hang on the wall in its office building. /Courtesy of Kebai

Photos of Kebai's automated devices hang on the wall in its office building. /Courtesy of Kebai

Whether it is GIS or sensors-enabled precision farming, the positive effects on crop yields are evident. But these technologies are only useful or profitable on large and medium-sized farmlands, a major obstacle for companies who want to expand their businesses.

Unlike the U.S. and other Western countries, China is dominated by a "small peasant economy," with a vast majority of farmers tending lands that are too small to be covered by these technologies, You explained.

Nonetheless, small farmers are expanding as China encourages them to join rural cooperatives to improve production, while companies like Syngenta that open up sales channels connecting farmers with buyers also believe they can motivate small farmers to move up their scale.

Still, You said it is unrealistic to think that China's overarching small landholder system will be upended. "Some of the innate attributes of China's peasant economy prohibit a structural overhaul of the way the farming industry works, while the western model, which is dominated by big farms, may also not apply in China."

The uneven distribution of China's agriculture and natural resources, and the long, scattered and complex industry chain could pose challenges for companies wishing to expand their businesses in this sector, said a person familiar with the subject from Bayer Crop Science China, the Chinese branch of German agrochemical behemoth Bayer AG.

A major competitor of Syngenta, Bayer is unifying its digital farming and new business model capabilities with the aspiration of bringing the company closer to farmers and accelerating its goal of shifting from an input provider to an outcome-based solutions provider. 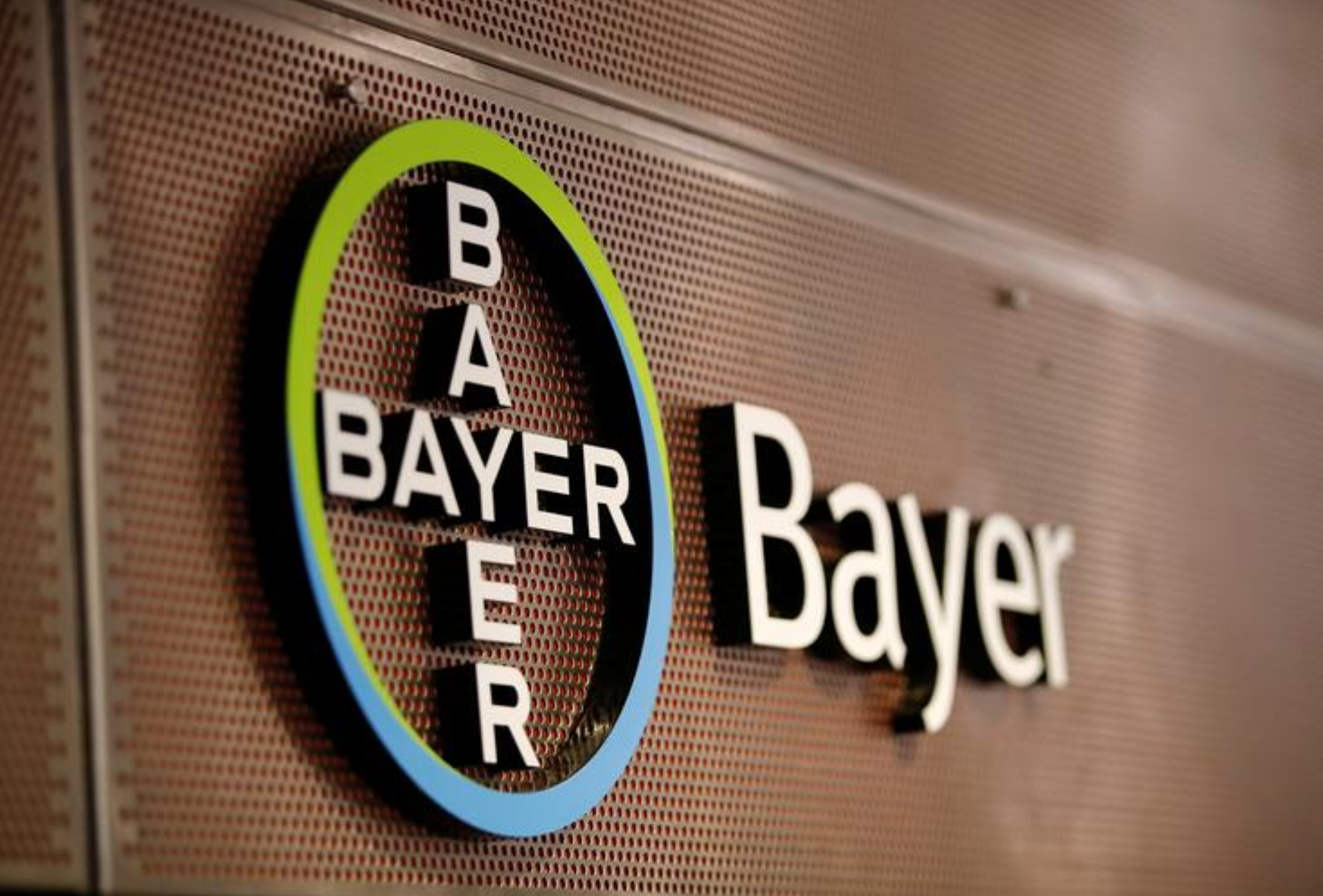 Logo of Bayer is pictured at the annual results news conference of the German drugmaker in Leverkusen, Germany. /Reuters

Logo of Bayer is pictured at the annual results news conference of the German drugmaker in Leverkusen, Germany. /Reuters

One of Bayer's key digital farming practices on the global market is called Climate FieldView, which is currently earning a revenue off of 900 million mu of land across the world. But mindful of the uniqueness in China, the German firm is not in a rush to roll out a Chinese version, despite having long invested in the country.

"To establish a presence in China, we will have to create a path that conforms to the way its agricultural industry evolves," the person, who prefers to stay anonymous, told CGTN.

Five years from now, small crop farming businesses may still be the mainstay in China. But with new technology and supply channels, the industry could grow significantly, and according to You, "that is what China needs."