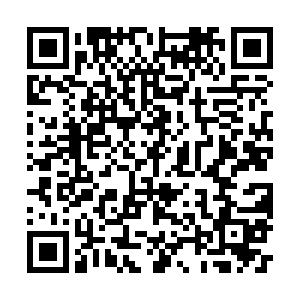 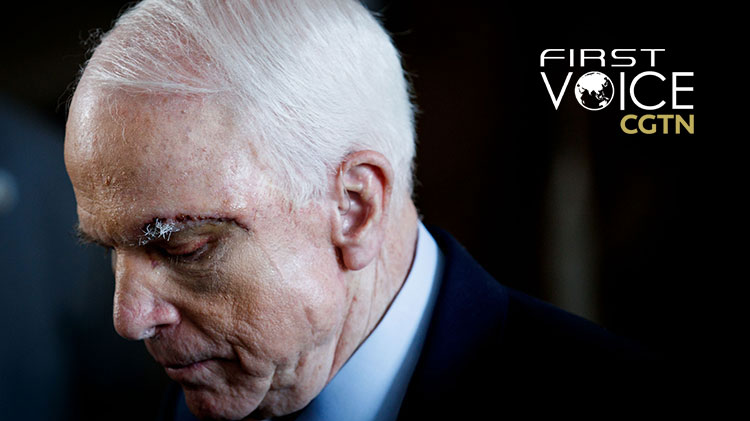 During her visit to Vietnam to shore up opposition to China, U.S. Vice President Kamala Harris visited a memorial where anti-aircraft defence had shot down a plane manned by John McCain, a veteran of the Vietnam War.

The memorial heralded the bravery of the Vietnamese soldiers who had thwarted his mission to destroy a nearby power plant, enraged at America's carpet bombing of the country. Despite this, Harris visited the site and stated "we honor his sacrifice in Vietnam" – while the previous day having written in a joint statement that the two countries aim to move beyond past issues.

Is the U.S. sorry for the Vietnam War, or not?

The posturing of Harris to domestic audience ought to stand as a warning that even though Washington is attempting to court Hanoi right now, in reality America never changes, with the unapologetic glorification of war, imperialism and destruction baked into their mindset. Even the shambolic scenes of Kabul have not extracted an ounce of regret nor self-reflection. This rings a hollow sound on Washington's promises to Hanoi.

In mainstream opinion in America, John McCain is heralded as a statesman and a hero on both sides of the aisle. He is deemed to be an honorable, patriotic and respectable servant of the United States. This cult of personality built around him was one which was derived from his capture and incarceration in then Democratic Republic of Vietnam, where he endured torture. This established him in the image of a "hero" who pursued an "honorable sacrifice" for the U.S., when in reality the war was inherently unjust, brutal and cost hundreds of thousands of civilian lives. There is no remorse for those who died at the hands of America, only for those who served them.

As a result, the imagery of John McCain has become a flag-bearer for the pursuit of unjust war by America. This is reflected in his highly neo-conservative outlook to global affairs, with McCain having, despite his ordeal, supported U.S. conflicts in Afghanistan, Iraq, Libya and advocated them unsuccessfully for numerous more locations. 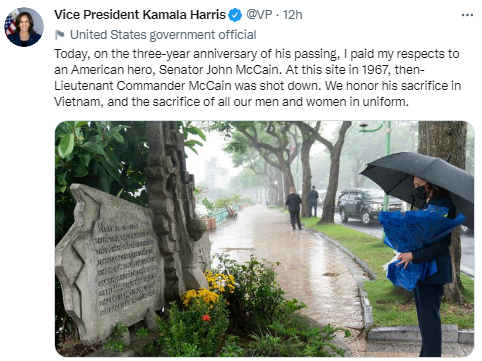 It is ironic on the climax of the Afghanistan crisis that Harris invoked that legacy. She displayed firmly that the U.S. has no regrets for anything it has done to the respective countries which it has invaded over the years.

What message does this send to Vietnam?

There is no soul-searching on this visit, only a rewiring of this norm into its newest pursuit of containing China. This is even reflected on Washington's decision to open a Center for Disease Control and Prevention Southeast Asia Regional Office in Hanoi, claiming "through this office, we will work closely with our regional partners to share strategies and strengthen each other's ability to prevent, detect, and respond to infectious disease threats."

We must question, how is this possible? And what exactly is the use for this when the U.S. has shown scant interest in multilateral coordination against the pandemic? Right now, the U.S. shows no interest in seriously discovering the origins of the COVID-19 through impartial scientific method, only through proliferating conspiracy theories.

In conclusion, all of Harris' gestures speak volumes of what the U.S. actually thinks of the people of Vietnam. Washington can't be trusted when it has illustrated itself to be an unreliable and self-interested partner. The U.S. is not in Vietnam for the Vietnamese people, but for its hegemonic conquest of containing China. Vietnam is clear about it. Earlier, its Prime Minister Pham Minh Chinh affirmed that his country would not enter an alliance with Washington to confront Beijing.

Patriotism is about defending your country at its time of need, not destroying others in the pursuit of hegemony. Be it the war or the pandemic, the U.S. is happy to overlook its own catastrophic decision-making and irresponsibility in an ivory tower of exceptionalism, summarized aptly by the legacy of John McCain, the "patriot" who bombed Vietnamese people.