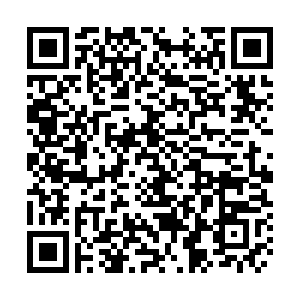 From endangered freshwater dolphins drowned by discarded fishing nets to elephants scavenging through rubbish, migratory species are among the most vulnerable to plastic pollution, a UN report on the Asia-Pacific region said Tuesday, calling for greater action to cut waste.

Plastic particles have infiltrated even the most remote and seemingly-pristine regions of the planet, with tiny fragments discovered inside fish in the deepest recesses of the ocean and peppering Arctic sea ice.

The paper by the UN's Convention on the Conservation of Migratory Species of Wild Animals (CMS) focused on the impacts of plastic on freshwater species in rivers and on land animals and birds, which researchers said were often overlooked victims of humanity's expanding trash crisis.

It said that because these creatures encounter different environments, including industrialized and polluted areas, they are likely at risk of higher exposure to plastics and associated contaminants.

Researchers cited estimates that 80 percent of the plastic that ends up in the oceans originates on land, with rivers thought to play a key role in carrying debris out to sea. 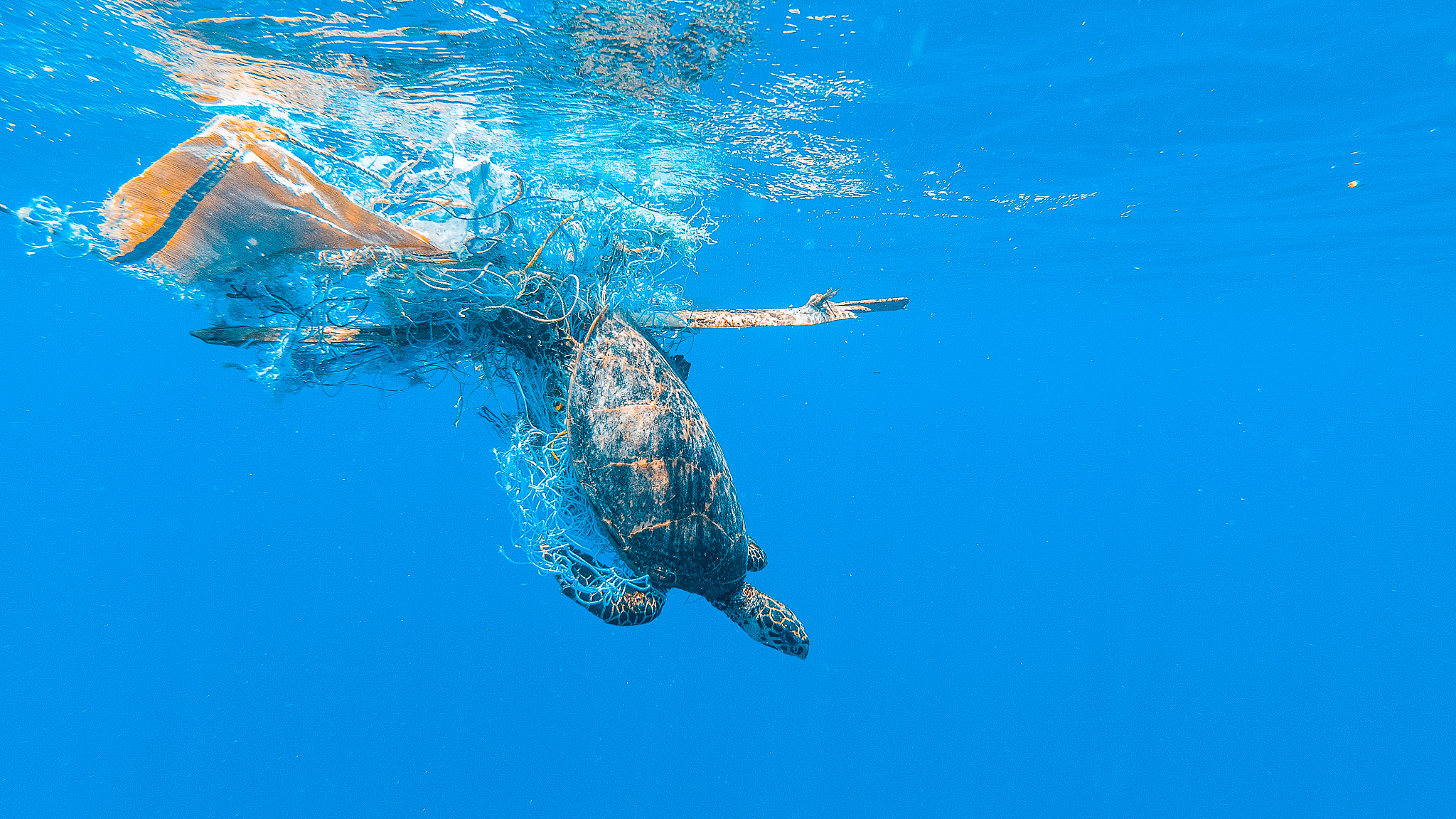 The UN report highlights two regions, the Ganges and Mekong river basins, which together contribute an estimated 200,000 tonnes of plastic pollution to the Indian Ocean and the Pacific Ocean every year.

Discarded fishing gear were found to be major threats.

Dolphins can become entangled and trapped under water by old nets, with endangered Irrawaddy dolphins and Ganges River dolphins at particular risk.

The report also said migratory seabirds, such as black-footed albatrosses and Laysan albatrosses, may not be able to tell plastic from prey when flying over the ocean and can accidentally eat floating debris.

This means the plastic could build up in their guts or be passed on to their chicks when they regurgitate food for them, it said. 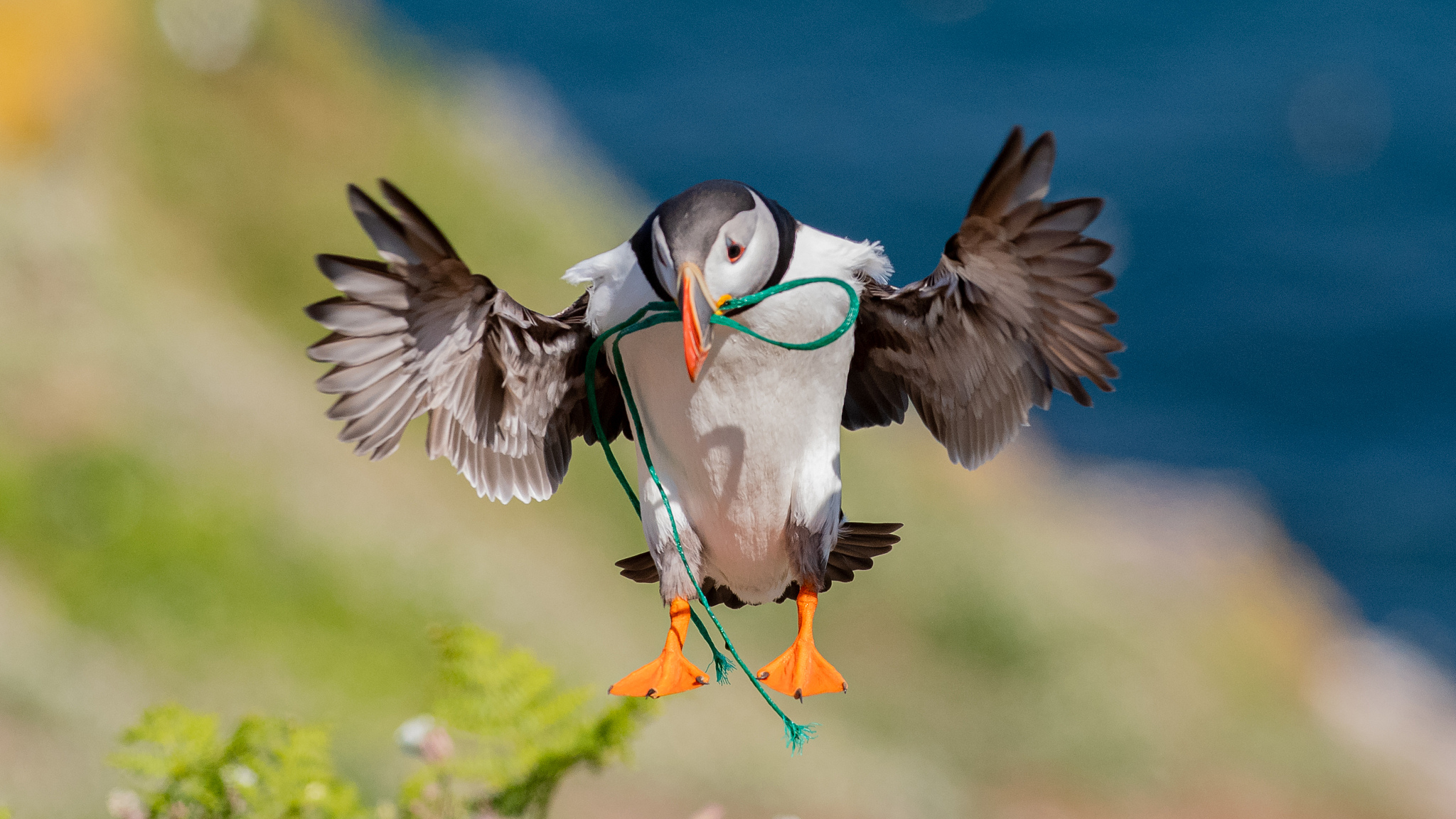 The puffin bringing in the plastic strand of fishing net back to it's nest on Skomer Island in Pembrokeshire, Wales, June 18, 2019. /VCG

The puffin bringing in the plastic strand of fishing net back to it's nest on Skomer Island in Pembrokeshire, Wales, June 18, 2019. /VCG

On land, Asian elephants had also been observed scavenging on rubbish dumps in Sri Lanka and eating plastic in Thailand, the report noted.

The report stressed that species in Asia-Pacific face a multitude of threats, including habitat loss, overfishing, industrial pollution and climate change.

"Even if plastic pollution is not the most significant of these stressors, it can add an additional stress to already vulnerable populations," it said.

It called for strategies to prevent plastic being dumped in the environment, reducing waste through better design and recycling, as well as greater efforts to understand the effects of this pollution on migratory species.