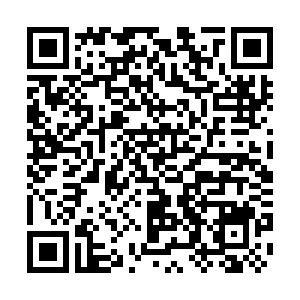 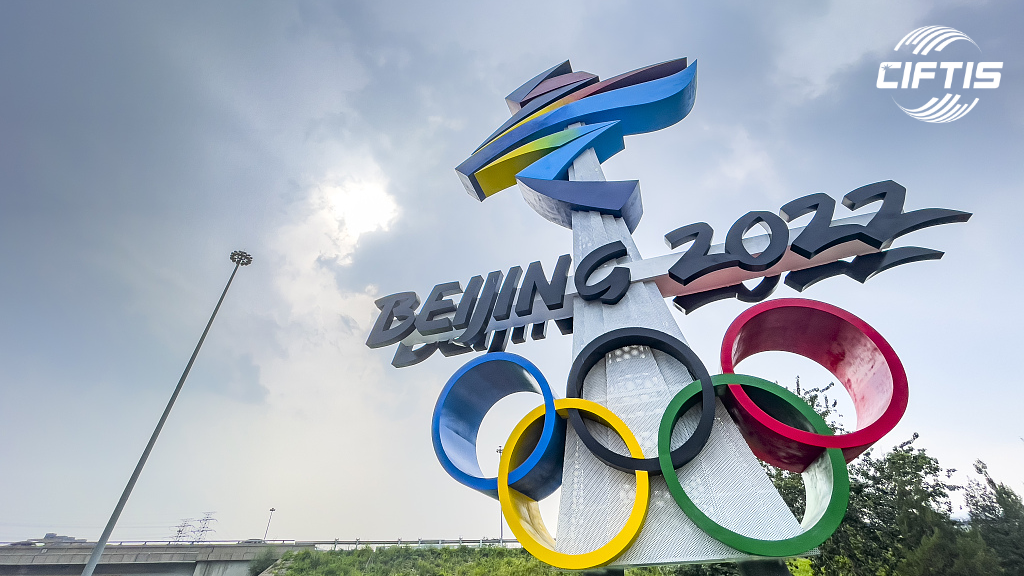 A sculpture of the emblem of the Beijing 2022 Olympic and Paralympic Winter Games stands on the ramp at Jinyuan Bridge in Beijing, China, August 5, 2021. /CFP

A sculpture of the emblem of the Beijing 2022 Olympic and Paralympic Winter Games stands on the ramp at Jinyuan Bridge in Beijing, China, August 5, 2021. /CFP

"Nearly flawless. Couldn't ask for more." That's Hu Dewen's verdict on China's performance at the just-concluded Tokyo Paralympics and the earlier Olympics. The octogenarian's view counts: he has tracked the engrossing ebb and flow of every Games since 1984, when the live broadcast of the global spectacle was beamed into homes across China for the very first time. Hale and hearty, he is also the rarest kind of sports junkie who tirelessly buries himself in full replays from the past Olympics. "I just can't get enough of this sort of stuff," the soft-spoken old bloke mused before retreating to his self-proclaimed "Game Room".

Hu will have a lot to chew on this time around. Coming close on the heels of the Olympics in which China equaled its best achievement in an overseas Games by winning 38 gold medals, just one behind the top-ranked U.S., Team Dragon again reigned supreme in the Paralympics. True to form, they displayed unmatched dominance to seal 96 golds and extended their breathtaking string of success at the showpiece event, having topped the medals table at every Paralympics since 2004.

While the flame that lit up Tokyo for the best part of six eventful weeks was elaborately doused on Sunday night in a closing ceremony that echoed the unrelenting COVID-19 crisis and brought an end to Japan's Olympic summer, avid watchers like Hu won't have to wait long for the next sporting extravaganza. The 2022 Winter Olympics are less than five months away, as all eyes now turn to the host city Beijing, whose successful staging of the Games in 2008 is still fresh in the memory. 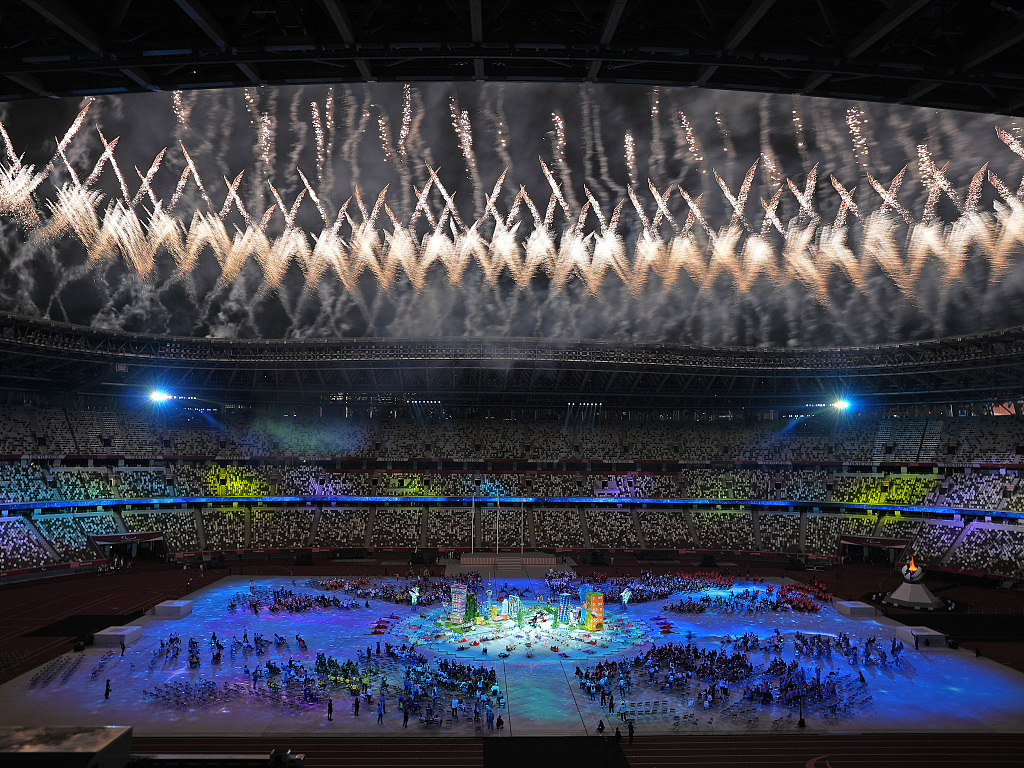 Fireworks erupt above the stadium during the closing ceremony of the Tokyo 2020 Paralympic Games at Olympic Stadium in Tokyo, Japan, September 5, 2021. /CFP

Fireworks erupt above the stadium during the closing ceremony of the Tokyo 2020 Paralympic Games at Olympic Stadium in Tokyo, Japan, September 5, 2021. /CFP

In a scheduling quirk, the 180-day gap between Tokyo 2020 and Beijing 2022 marks the shortest turnaround between editions of the Olympics since 1992 - the last time the Winter and Summer Games were held in the same year. While uncertainty remains the new normal during the coronavirus era, the International Olympic Committee (IOC) President Thomas Bach was oozing confidence that China could pull off a brilliant feast for sports fans around the world.

"All the elements are now in place for China to host the Beijing 2022 Winter Olympics, which will change the landscape of winter sports forever. The whole Olympic family is looking forward to this global festival," declared Bach in a congratulatory letter sent to the 2021 World Winter Sports Expo (WWSE), which went live at Beijing's stylish Shougang Park on Friday.

As a central platform for the international winter sports industry, this year's WWSE devotes multiple exhibition booths, professional presentations and panel discussions to detail the final preparations for the Beijing Winter Games.

Key milestones were underlined by various interactive platforms. All competition venues have been completed and passed on-site pre-homologation tests, while the Olympic Village and International Broadcast Center have also been primed to welcome guests. 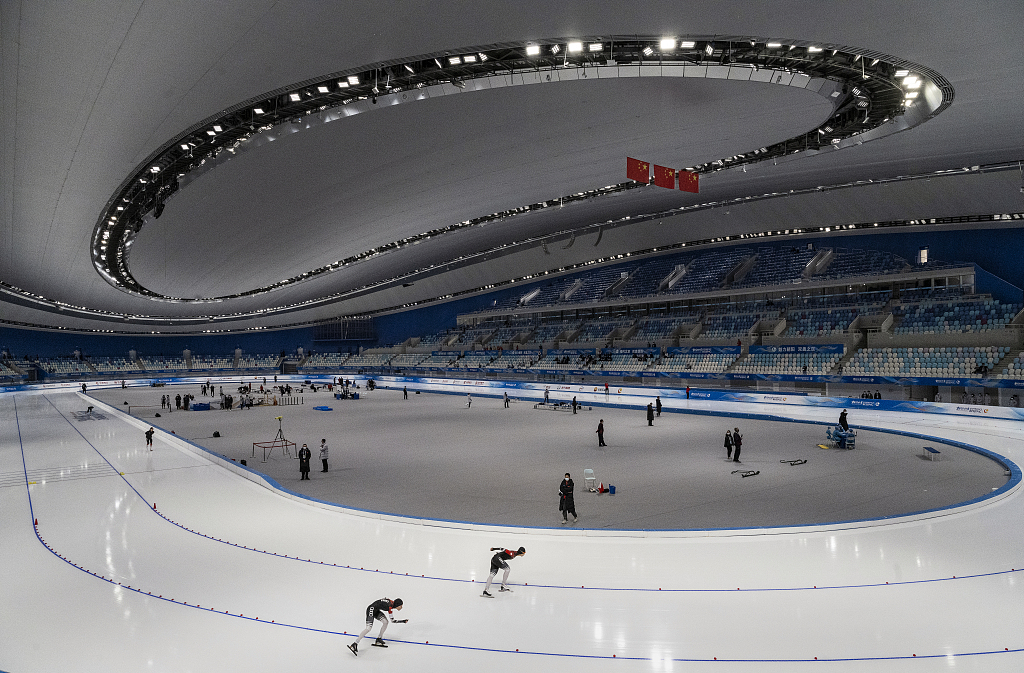 The WWSE, a key part of the 2021 China International Fair for Trade in Services (CIFTIS), also spotlighted China's deepening cooperative ties with winter sports powerhouses. Finland, Norway, Austria and Switzerland have all hosted and trained Chinese elite coaches and athletes in their world-class sports facilities over the past few years.

Meanwhile, more than 300 campaigns to raise awareness on winter sports was held in China in recent months, engaging nearly 100 million people, according to Zhang Qian, head of the international relations department of the Beijing 2022 Olympic Games Organizing Committee (BOCOG). Over 1.1 million people have signed up as volunteers, he added.

As a testament to China's pledge to stage a Green Olympics, all venues will be powered 100 percent by renewable energy with the electricity being generated by means of wind power and solar photovoltaic (PV) systems. The Beijing Games are only the second Winter Olympics to achieve ISO 20121 certification, an international standard governing sustainable event management created by the International Organization for Standardization. 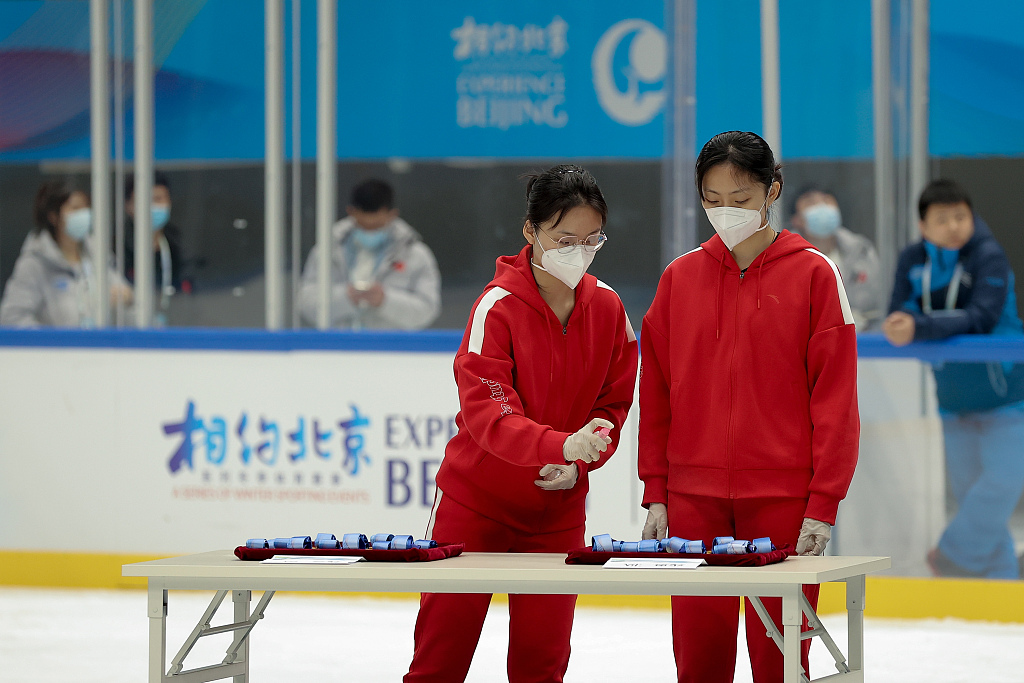 Staff disinfect the medals at the award ceremony during a test event for the Beijing 2022 Winter Olympics at the National Indoor Stadium in Beijing, China, April 10, 2021. /CFP

Staff disinfect the medals at the award ceremony during a test event for the Beijing 2022 Winter Olympics at the National Indoor Stadium in Beijing, China, April 10, 2021. /CFP

And more to the point, with Tokyo 2020 now in the rear-view mirror, Beijing 2022 will ramp up for the final stretch. "Ten international test events, two domestic test events and three international training weeks will be held in Beijing from October to December," said Liu Yumin, head of the planning and construction department of the BOCOG.

As Beijing organizers have not revealed the full extent of the COVID-19 countermeasures yet, those test events could offer a sneak peek at the meticulous precautions they are expected to take against COVID-19.

China has repeatedly asserted that its top priority in holding the Olympics is the health and safety of all those involved in the event. The country has backed up its words with the setting up of a coronavirus prevention and control task force, which is jointly headed by the BOCOG, the IOC and the World Health Organization, and dedicated to meet the exacting standards required of the Winter Games.

"We will learn from Tokyo's experience and take into account Beijing's current anti-virus policies," observed Liu. "Preventive measures will be implemented specific to each venue's needs. Some temporary facilities, such as separate walkways, wall claddings, makeshift restrooms and isolation centers, are being added to all venues to minimize exposure and cross-infection." 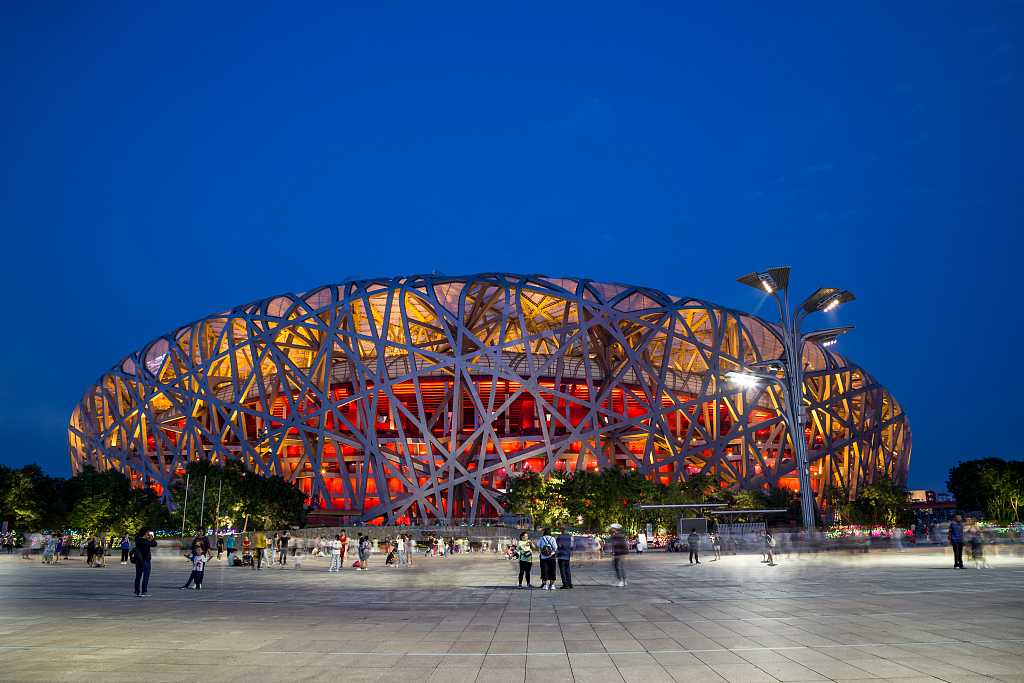 The opening ceremony of Beijing 2022 is scheduled to take place on February 4 next year at the National Stadium, also known as the "Bird's Nest". /CFP

The opening ceremony of Beijing 2022 is scheduled to take place on February 4 next year at the National Stadium, also known as the "Bird's Nest". /CFP

As new coronavirus variants have surged around the world, the Beijing Games could look incredibly different to past Winter Olympics, but the grand gathering could also serve as a symbol of world triumph over the all-consuming pandemic. "We need very successful Games next year in Beijing. We really need that success for the sake of everybody, for the sake of keeping that light of hope really bright and open," opined Juan Antonio Samaranch Jr., who heads the IOC Coordination Commission for Beijing 2022.

It remains to be seen what the future holds for Beijing, which is set to become the first city to have hosted both the Summer and Winter Olympics. But one thing is certain: When the Olympic flame is once again lit in China's iconic "Bird's Nest" National Stadium on February 4, 2022, a long-serving aficionado will hole up in his "Game Room", rooting for the home team and willing them to another morale-boosting victory.