Download
On the Wings of Music: Rural teacher lights up children's lives with singing
By Yang Jinghao, Zhang Kai 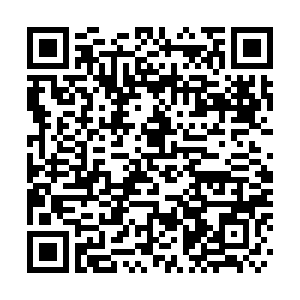 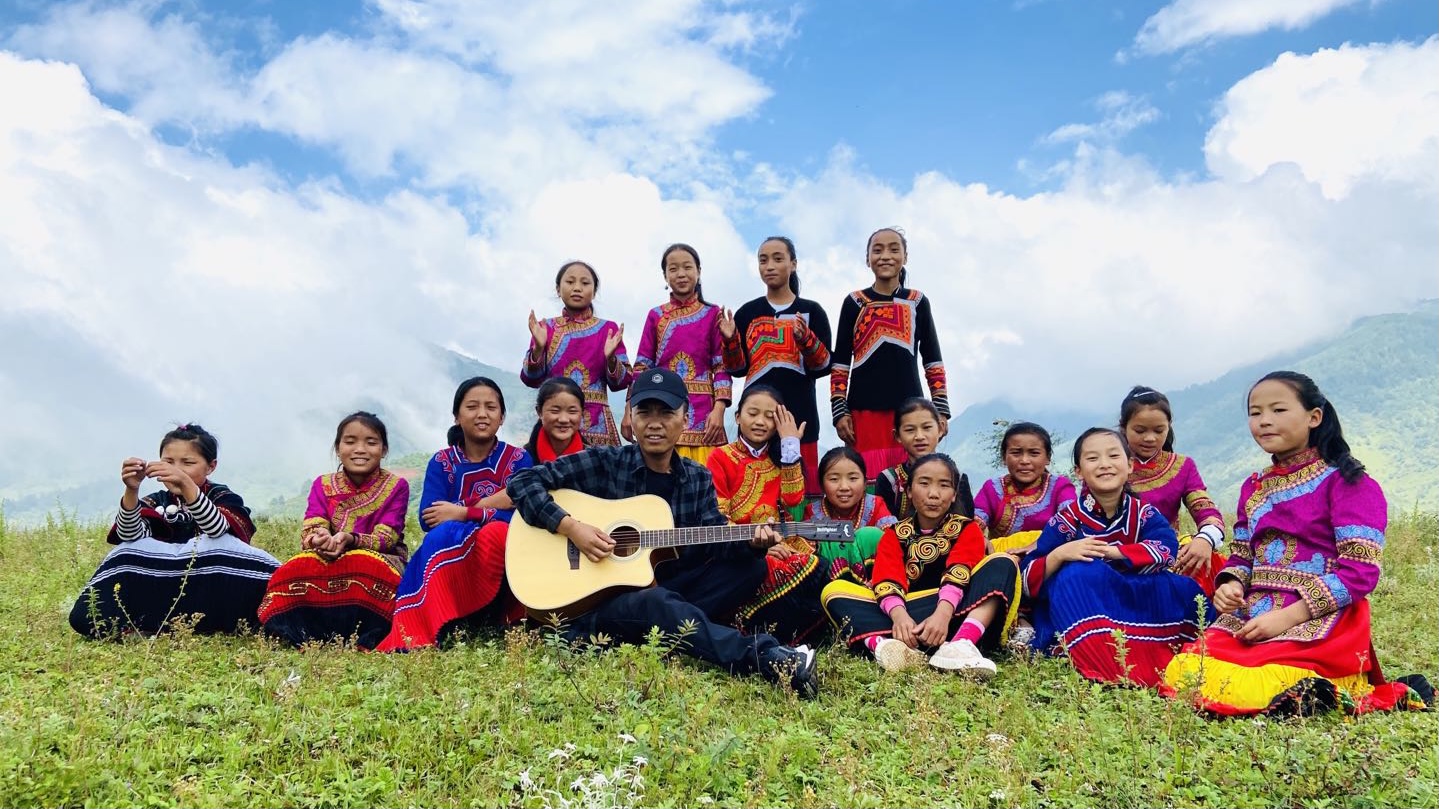 Jibu Xiaolong has a full schedule every day. After giving all lessons to students, he continues to coach the members of his choir.

Writing songs, playing instruments and teaching his students how to sing, for the 35-year-old teacher, music is an integral part of his life, and it is also changing the children from somewhere once known as one of China's poorest regions in a special way.

He describes this a way of realizing the children's dream, but also his own dream.

A dream-chaser from mountainous village

Xiaolong was born in Liangshan Yi Autonomous Prefecture in southwest China's Sichuan Province, home to the largest population of the Yi ethnic group. For centuries, it was isolated from the world, with all residents struggling in deep poverty.

Xiaolong's affection for music started in middle school when he received a guitar from his father as a gift, something deemed as a luxury back then. He was later admitted to the Sichuan Conservatory of Music, a great honor in a place where very few people could receive college education due to poverty.

"But I dared not sing in the beginning, as most of my classmates received professional training during high school and could sing very well. I didn't even know how to do solfeggio and ear training," Xiaolong recalled. 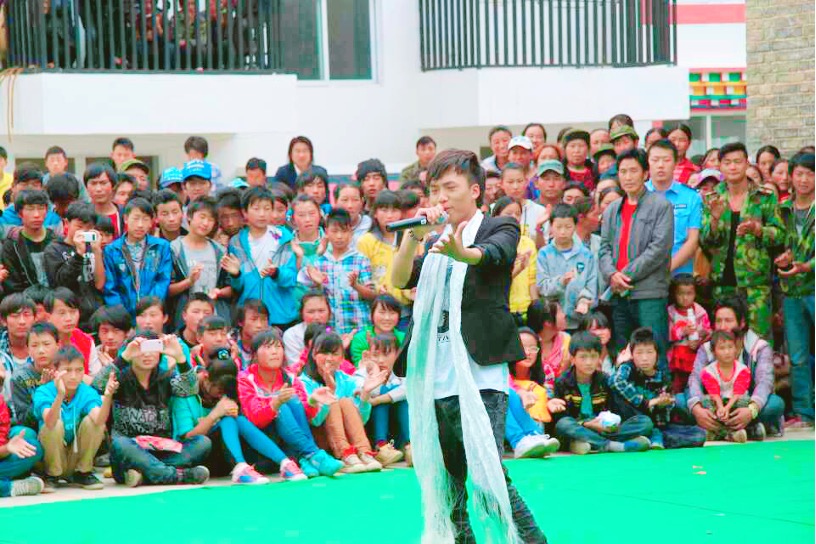 Jibu Xiaolong used to perform in various occasions before he started working as a teacher. /Jibu Xiaolong

Jibu Xiaolong used to perform in various occasions before he started working as a teacher. /Jibu Xiaolong

Yet his passion has never faded, and he gradually regained confidence as his horizon was broadened in the provincial capital. Following his graduation, he chose to pursue his dream as a singer in different cities, including Beijing, where he participated in some music talent shows and performed part-time in various occasions.

It's an adventure full of excitement as well as setbacks. The ambitious young man didn't get many opportunities as expected at a time when young dream seekers were flourishing. He said in the most difficult period of time, he couldn't even afford a guitar worth of 300 yuan ($47).

Then he decided to go back home.

"I love singing and playing instruments. I thought it would be great if I could help children in my hometown enjoy music and bring them happiness through singing," Xiaolong said.

An educator with experience from big cities

In 2012, Xiaolong took up work as an elementary school teacher in Liangshan. Apart from music, he also taught other subjects like math as well, a common practice in many rural areas where teachers are scarce.

In the first few years, Xiaolong tried to create a children's choir, but his attempts all failed as students were all too shy to sing.

"They even blushed when I talked to them," he said. 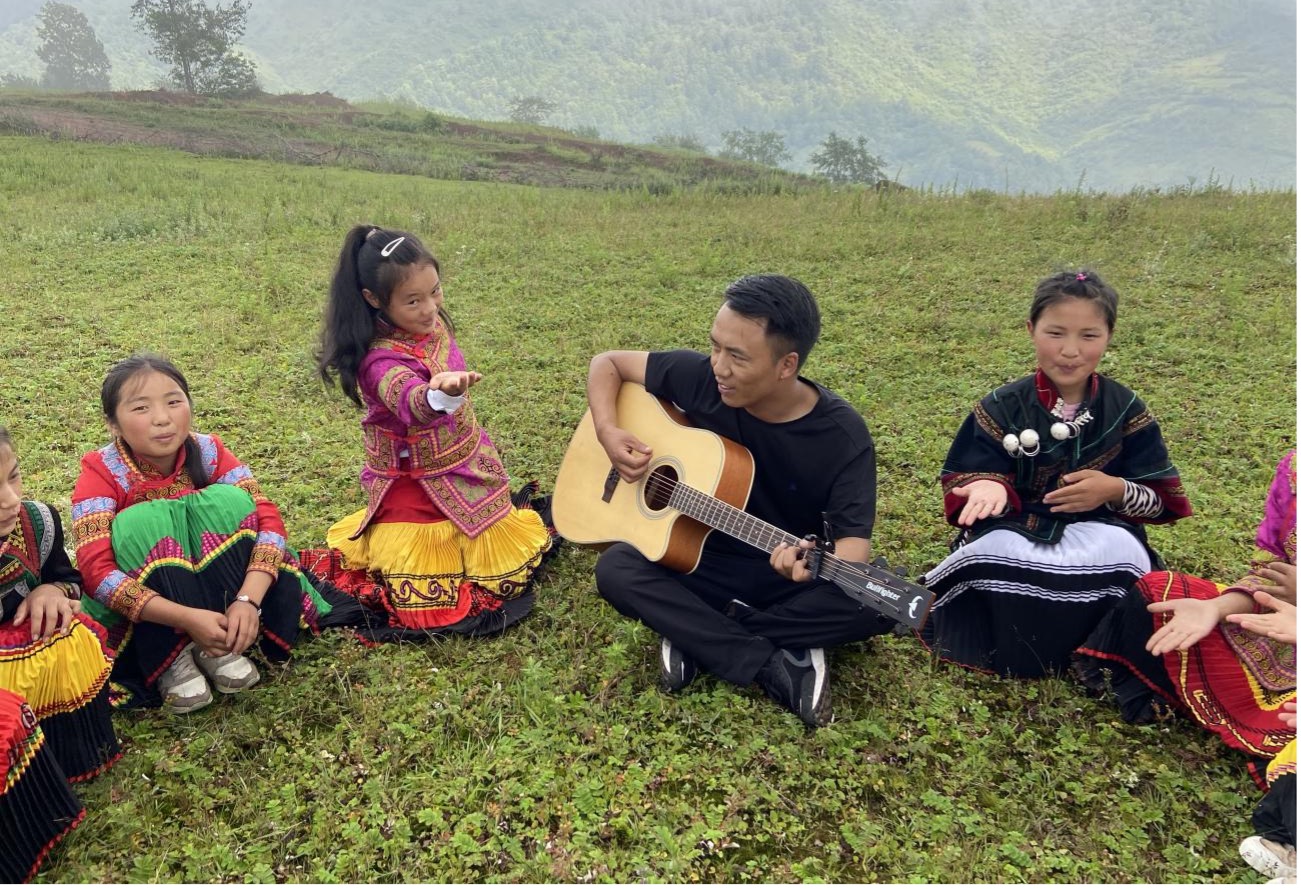 Jibu Xiaolong and his choir members sing in the open air. Yang Jinghao/CGTN

Jibu Xiaolong and his choir members sing in the open air. Yang Jinghao/CGTN

In 2018, he finally found four children who would like to sing with him at the school he currently works at in Puge County. He also started to write songs on his own, in both Chinese and Yi ethnic language, all focusing on the children's childhood life and beautiful hometown.

The melodious works have attracted a growing number of students. Now, the choir named "Niuniu," meaning little girls, have some 40 members.

Xiaolong explained that many boys were naughty and felt embarrassed to sing together with girls, and so the group gradually became exclusively for girls.

For these students who've never walked out of their mountainous home, music has changed them quite a bit.

"Having stayed in the choir for one and a half years, I'm getting a lot more daring. I was once shy, but now I like to laugh all the time," said six-grader Aniu Wuge. 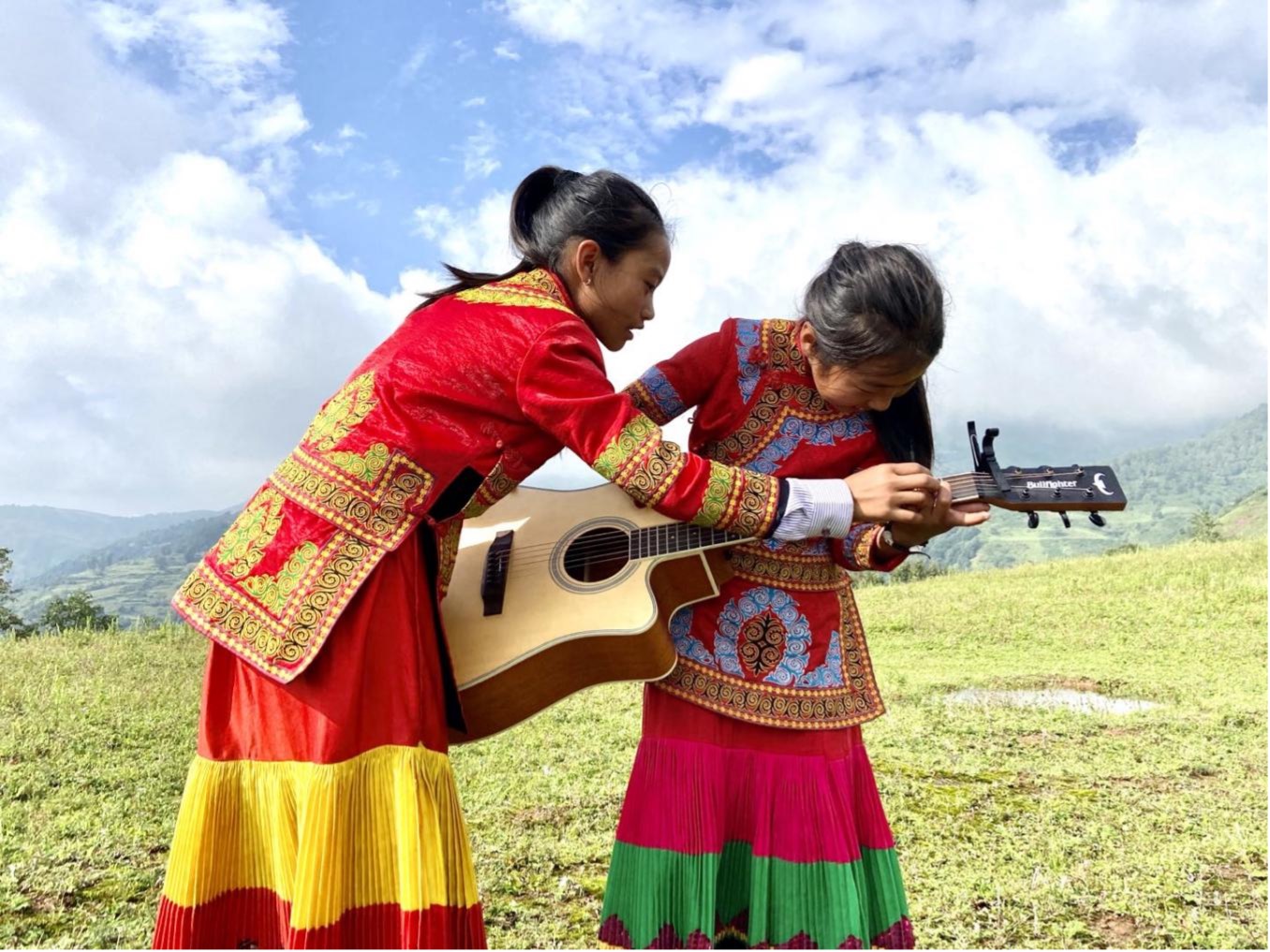 Many of the members are so-called "left-behind" children, as their parents seek employment far away from home. For them, music means much more.

"When I miss my parents, I always sing the songs Xiaolong writes for us, especially one called 'Brave Niuniu,' as one line says 'I can look after myself even when mom and dad aren't home,'" said choir member Asheng Wuzhi.

A pathfinder of 'left-behind' children

Xiaolong said he felt upset when he just came back and started his teaching career, as what he was still longing for stages to perform. But now, the choir has allowed him to create a close bond with the children, bringing him a sense of accomplishment.

"Sometimes I feel as if they're carrying on my dream. I was pursuing my own dream before, but I feel what I'm doing now is more meaningful, as it allows me to help these children in my own special way," he said. 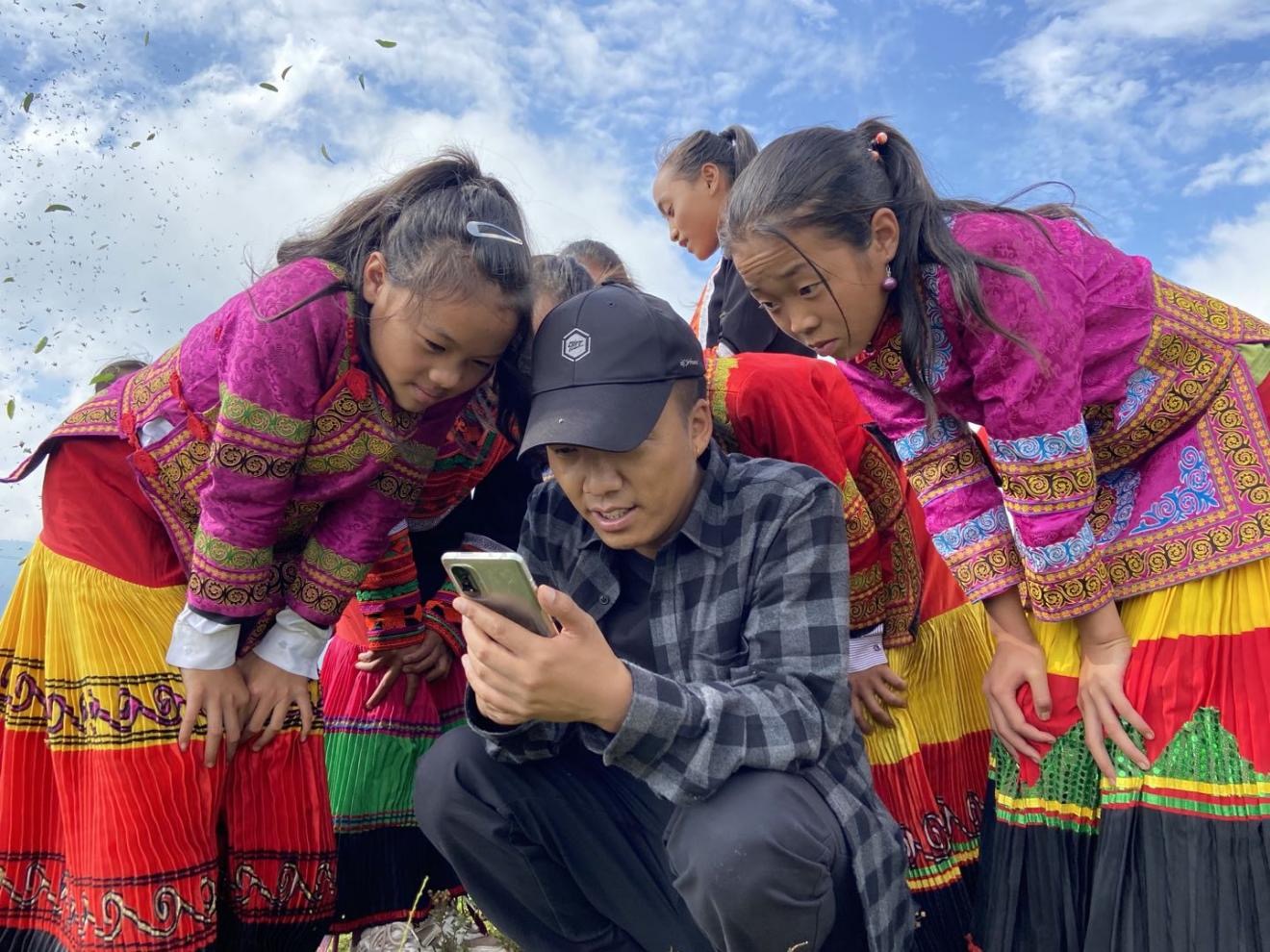 Jibu Xiaolong and his choir members read comments from netizens towards their performance. Yang Jinghao/CGTN

Jibu Xiaolong and his choir members read comments from netizens towards their performance. Yang Jinghao/CGTN

He also posts the children's singing at some popular video-sharing platforms like Douyin, the Chinese version of TikTok, gaining much popularity. This has brought much confidence to both Xiaolong and the members.

Xiaolong is currently trying to seek more performance opportunities for the children in order to expand their horizons and to share the Yi culture with a larger audience.

"If they can take a look at the outside world, they would plant a seed for a better future in their heart and then study harder," said Xiaolong. He added that they will not participate in any commercial performances.

Earlier this year, they were invited to perform in a music festival in Beijing, but the trip was canceled due to the COVID-19 epidemic, a great disappointment for the girls.

"I hope we can have more opportunities to perform on big stages, really big ones. I really hope I can see more of the world," said choir member Axi Wuguo. 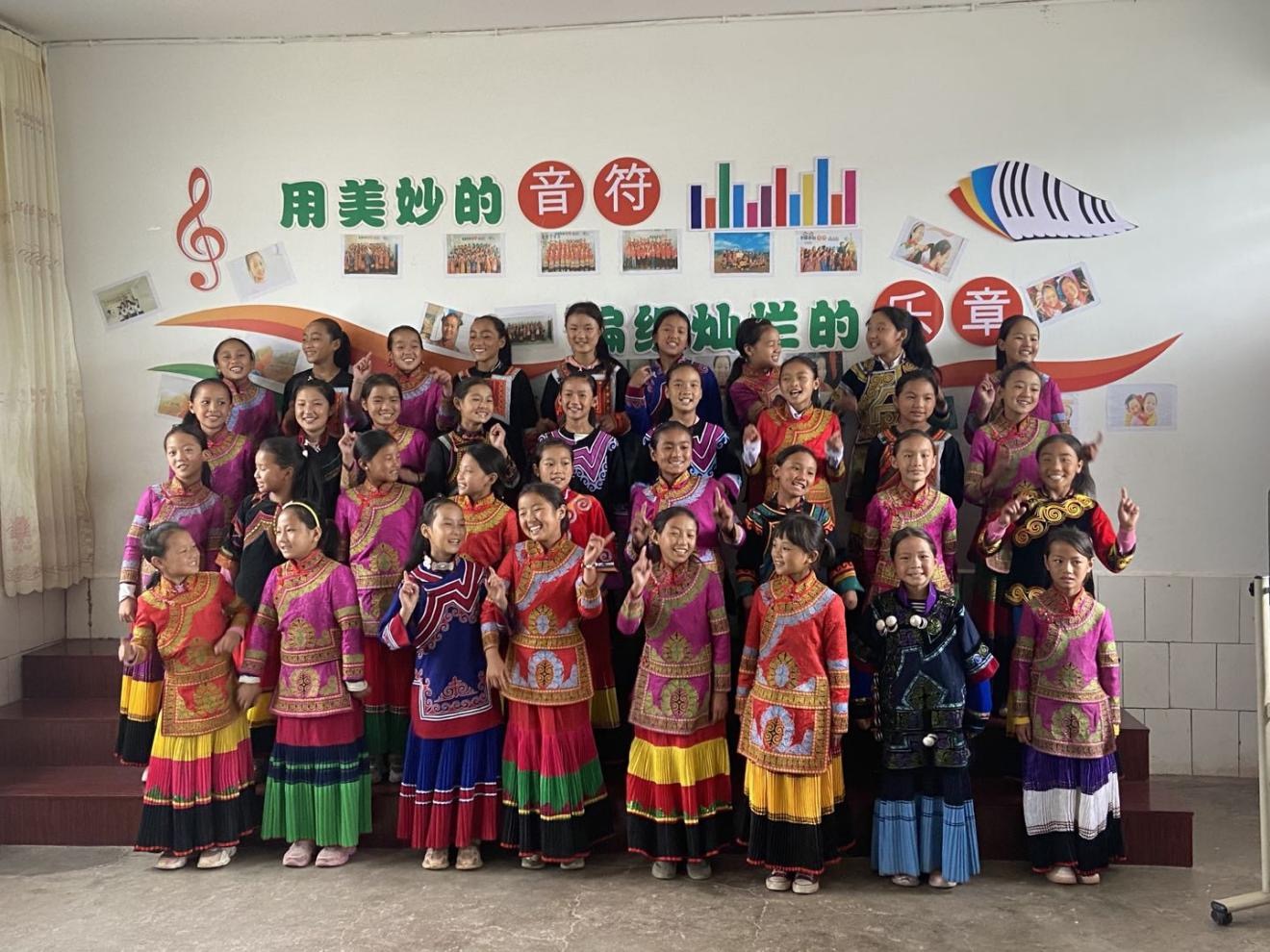 "I hope more children can join the choir and that music can change them to some extent," he said.

"Meanwhile, I've written about 15 songs in both the Chinese and Yi ethnic language. I hope I'll be able to release them on some music platforms someday, so children from other villages can also learn them, and engage in the world of music."