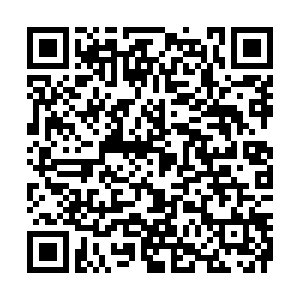 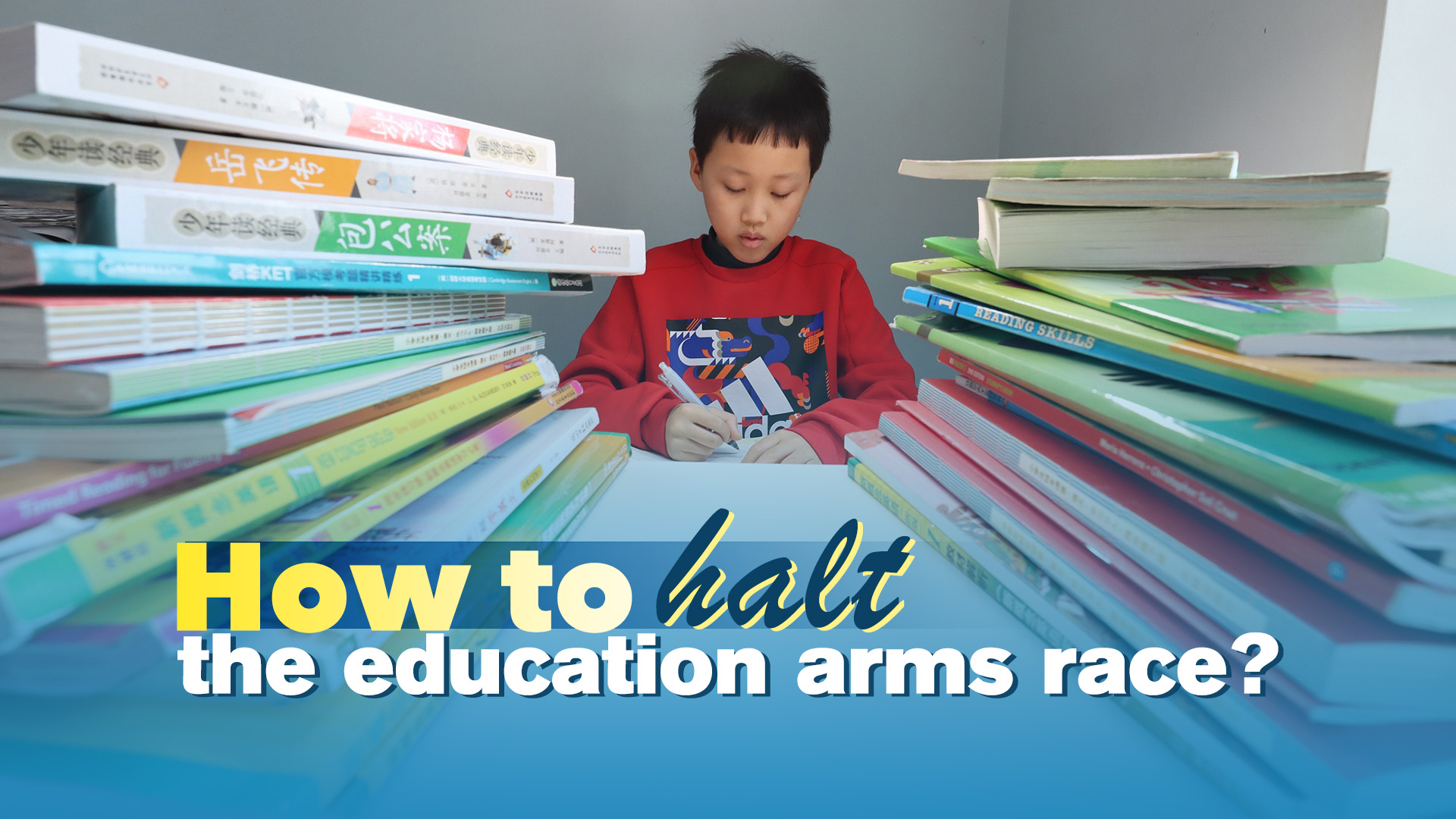 Beijing native Qi Fang, 38, said she was not a helicopter parent. But earlier this year, she signed her eight-year-old son up for tutoring in four curriculum subjects. And on top of that, a coding class.

What prompted her to change was the fact that her son recently scored lowest in his class. And she blamed herself for not being invested enough in her son's education. In his class, at one of the top schools in Beijing, every student attended after-school tutoring, and many of their parents took days off to accompany their children to tutoring classes so that they could teach them after class.

"It is an education arms race between parents, and I am clearly falling behind," said Qi.

China's education system is known for its exceptionally competitive nature. And parents, anxious about their children's future, have been dragged into a tutoring arms race. A 2019 report published by the China National Children's Center and the Chinese Academy of Social Sciences showed that parents spend average 9,211 yuan ($1,425) a year on after-school tutoring, accounting for 12.84 percent of a family's income.

Most of the parents who sent their children to after-school tutoring wanted to give them a leg up in the highly competitive exam-based system. But that quickly spiraled into a vicious cycle of competition. Because private training institutions frequently jump ahead of and cover areas not on the formal syllabus, for students who haven't yet signed up for the after-class tutoring, it becomes a necessity in order to catch up. 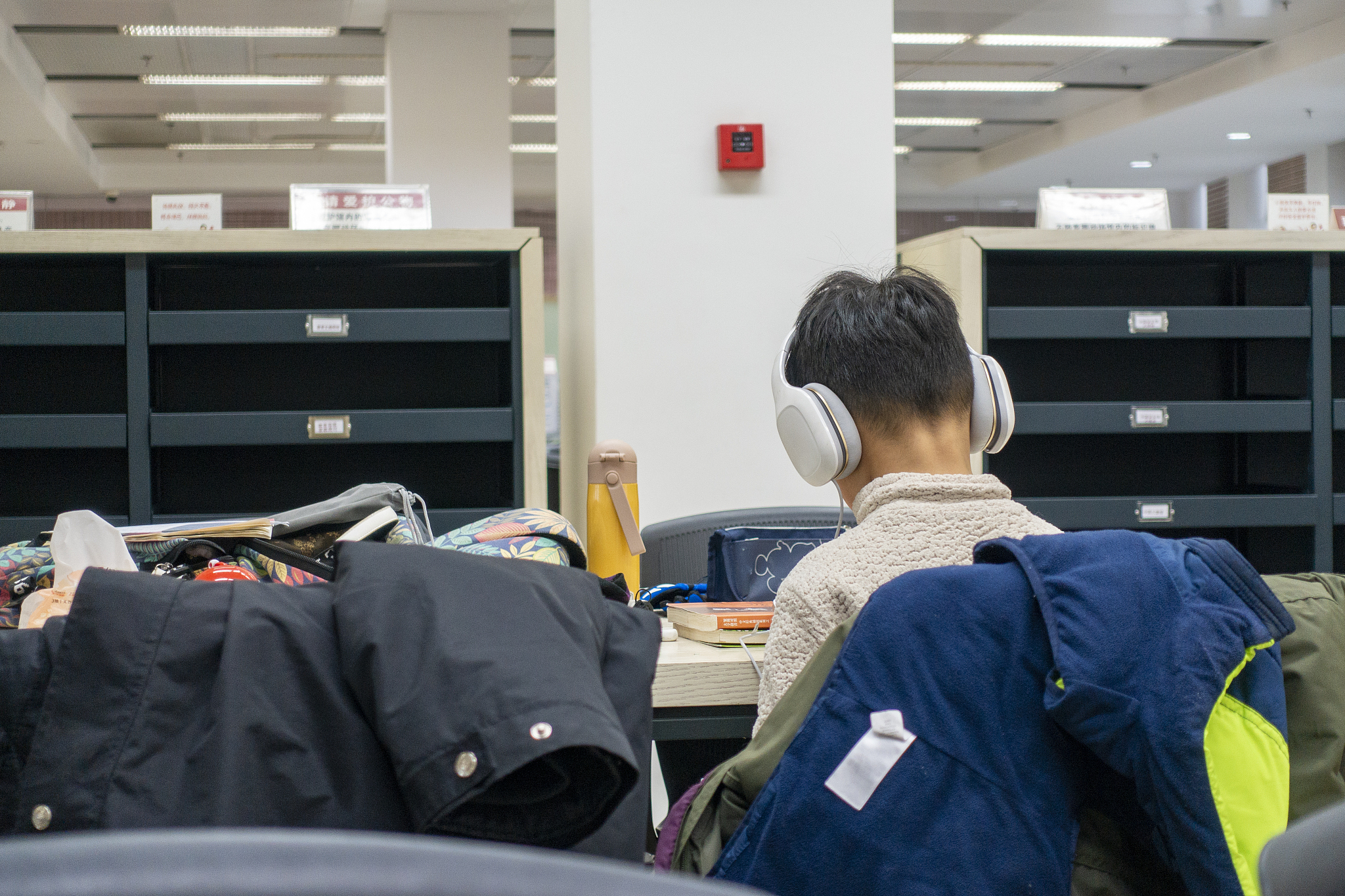 A primary school student does his homework at a public library in Shanghai, China. /VCG

A primary school student does his homework at a public library in Shanghai, China. /VCG

Liu Hong, a mother of two, who was originally from east China's Shandong Province and has now settled down in Beijing, said she started to assign her child college-level English test papers when the kid was still in primary school. At the age of 12, the child scored 151 out of 160 in an FCE test run by Cambridge English, one that is normally taken by university students to demonstrate an upper level command of English.

"That can help her stand out among the rest when applying for middle school," she said.

For many parents from places other than Beijing and Shanghai, education is what provided them mobility, and they desperately want to maintain their middle-class status, said Ye Liu, senior lecturer at international development of King's College London who researches education and equality.

"They are worried that their children would slide down in social class," she noted.

But all of those stand in the way of China's pursuit of educational equality. The high fees charged by training schools were a significant source of economic pressure and served as a strong deterrence towards parents who wanted to have more children, at a time when China is rapidly aging. 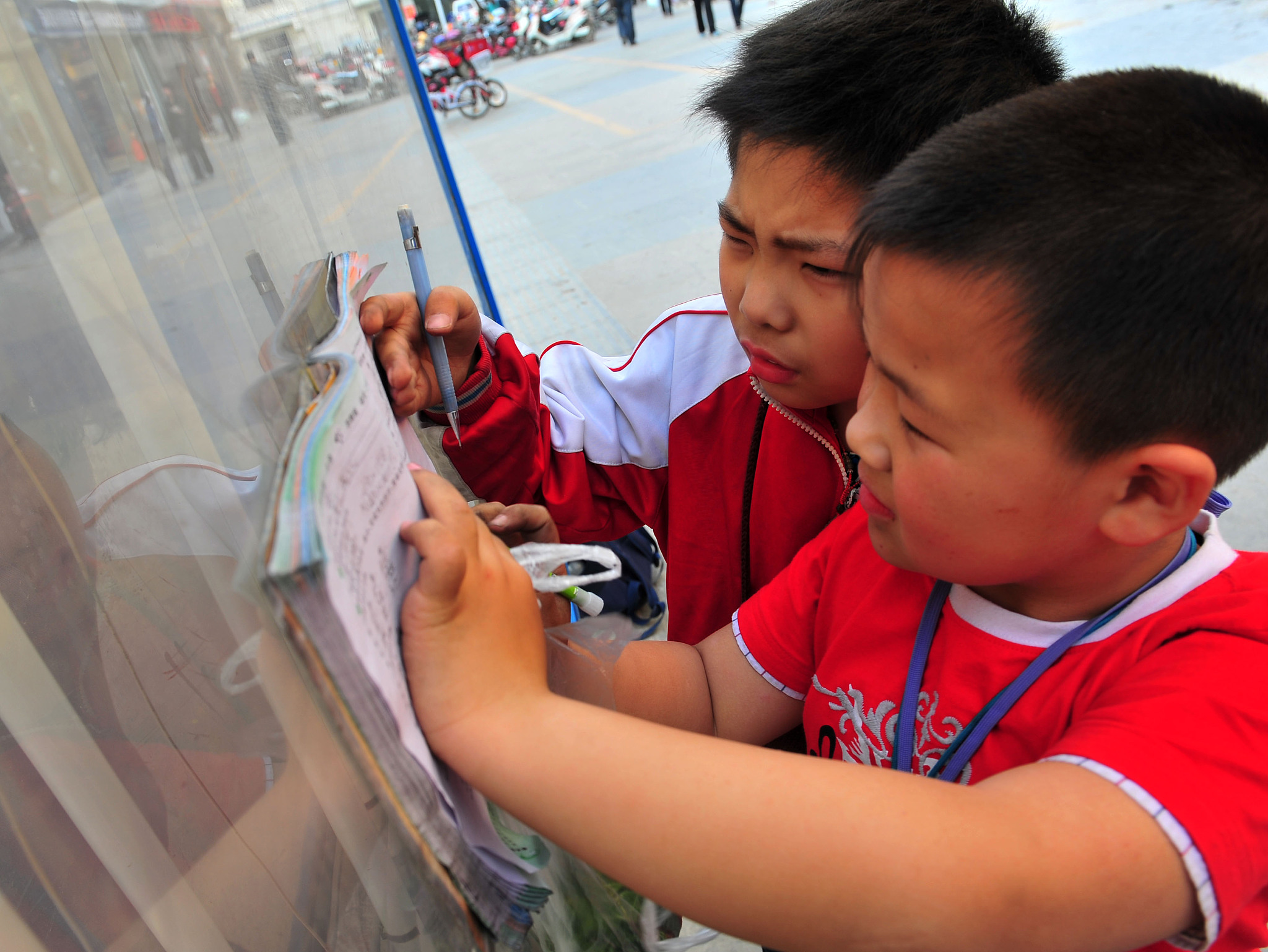 Two primary school students write homework against a billboard as they wait for a bus in central China's Anhui Province. /VCG

Two primary school students write homework against a billboard as they wait for a bus in central China's Anhui Province. /VCG

In what has been termed the harshest curb on after-school tutoring, China recently issued a series of policies for its latest education reforms. The scheduling of classes during weekends and holidays was canceled, and online classes were all capped at a half-hour per session.

The most drastic of all is the rule which says the homework time for primary school students from the third to sixth grade should be no more than 60 minutes, and for those in the first and second grade, there should be no written homework and tests at all.

The reforms aim to reduce the academic burden on students and take off some of the pressure felt by parents amid the cut-throat competition in the education sector, according to the government.

An English teacher at a public middle school in Daxing District, the suburban area of Beijing, said she adjusted her modes of instruction after the reform measure came into place. Homework was cut down significantly, from 45 minutes of English study to 15 minutes per day. Previously, she would assign reciting the text as part of the homework. Now, she reserves part of the class time to her students to finish the task.

"The policy would work best for students who are smart, and who have an interest and determination to keep up with the school work," she said. "But for those, who have no interest or determination to study, without the added pressure from tutoring and cram school, they might immediately fall back to their normal selves." 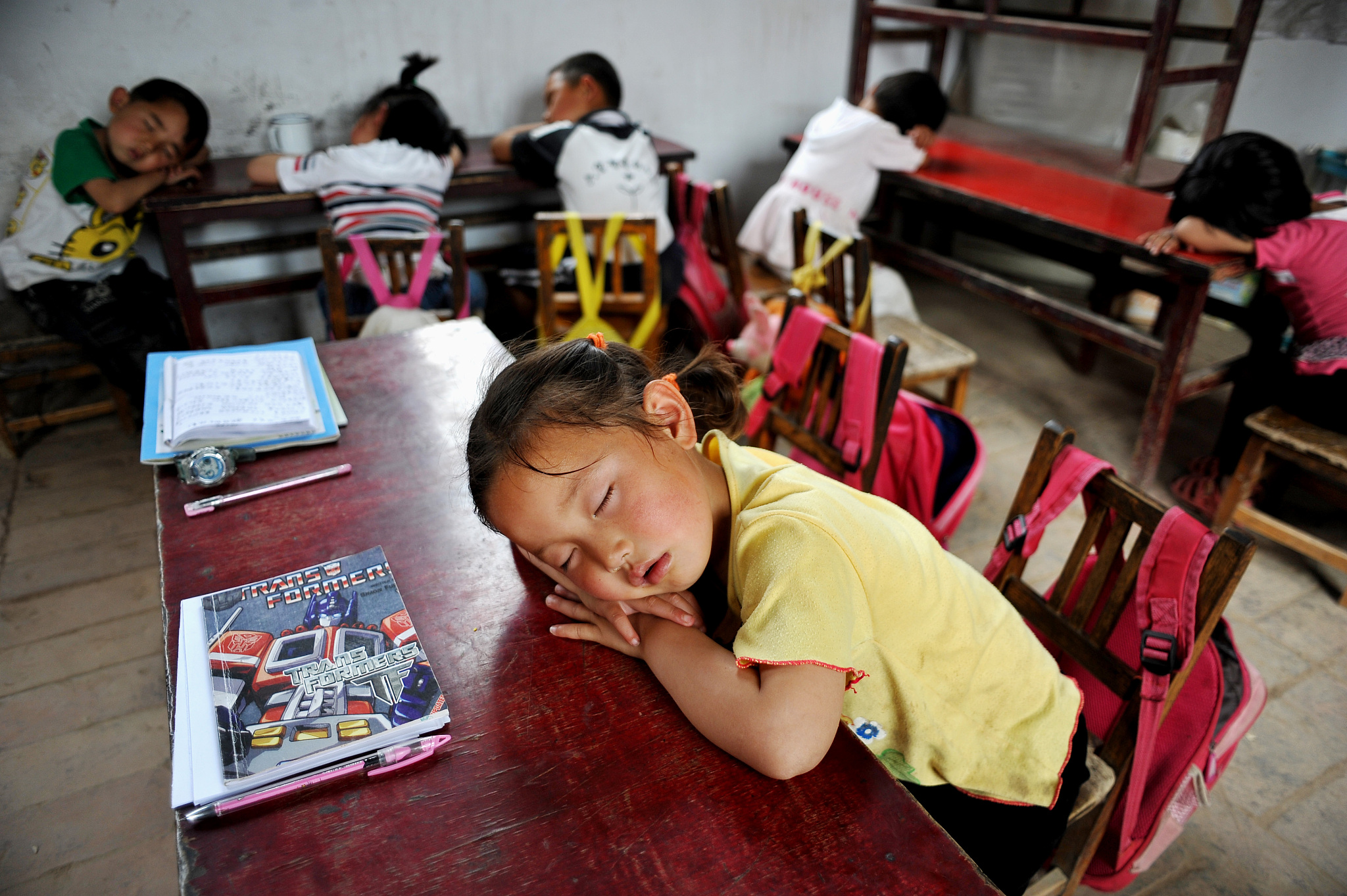 Napping after lunch at a kindergarten in north China's Shanxi Province. /VCG

Napping after lunch at a kindergarten in north China's Shanxi Province. /VCG

Cui Lu, a teacher from one of the most prestigious middle schools in Haidian District, a hub for top schools in Beijing, said banning cram schools would help students reorient their focus on school work. "Since cram schools often jump ahead of public schools' schedule, they break the systematic approach to learning that teachers planned for instruction."

At such a young age, the most important factor for students is not knowledge per se, but to cultivate good learning habits and systematic ways of studying, she noted.

Deficiencies in the public education system, such as large class sizes and lack of quality teaching, are often cited as reasons behind the popularity of after-school tutoring in China. And some parents expressed concerns that without addressing deficiencies in the public education system, parents would always have the incentive to hire private one-to-one tutors or choose to train their kids by themselves.

"It's parents against parents now," said Qi. With the weekend tutoring cancelled, she bought a number of instructional manuals and prepared to teach her son at home after school ends each day.

Educational reforms with a focus on lightening the burden for students and parents have been carried out for 20 years, but the main barrier is the exam-oriented nature of Chinese education system, said Xiong Bingqi, vice president of the 21st Century Education Research Center.

An overhaul to China's educational system with the aim of equalizing educational opportunities would be needed in order to truly lighten the burden on students and parents, according to Xiong.

"If we don't solve the problem with the whole pipeline, e.g. rewriting the Gaokao as a competitive and selective system, give students more choices for higher institutions, and put a stop at the obsession with elite schools … the effect of the reform measures would be limited," she noted.