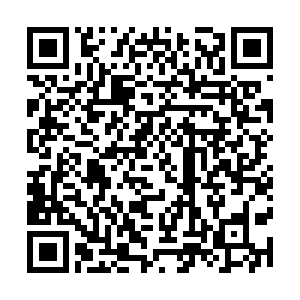 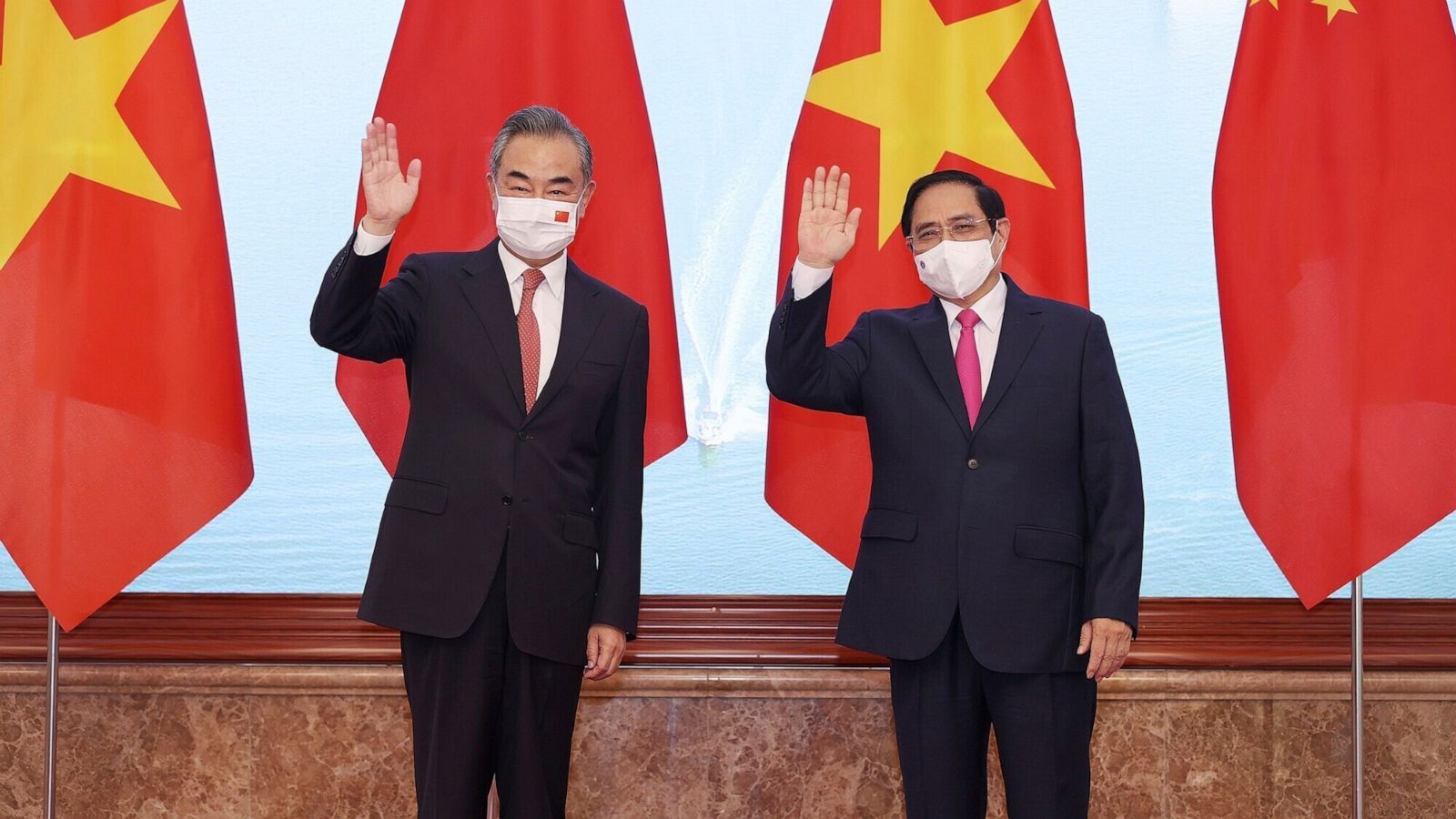 On September 10, 2021, Chinese State Councilor and Foreign Minister Wang Yi began his weeklong official trip to Vietnam, Cambodia, Singapore and South Korea at the invitation of these countries' officials.

To materialize this development set in the framework of a "community with a shared future," Wang Yi and Pham Binh Minh agreed that their countries should leverage the natural advantage of being connected by land and sea, work for stronger momentum of two wheel-driven economy, trade and investment, accelerate the connectivity and cooperation under the Belt and Road Initiative and the strategy of Two Corridors and One Economic Circle, and strive for greater breakthroughs in bilateral trade volume in 2021.

The two sides declared the setup of the Unimpeded Trade Working Group and signed a new memorandum of understanding on the five-year partnership between the two trade ministries and an agreement on economic and technical cooperation.

They also mentioned a commitment to properly organizing the East Asian leaders' meetings on cooperation and the Summit on Celebrating the 30th Anniversary of China-ASEAN Dialogue Relations with other countries in the region.

Notably, Vietnam, which has been struggling to control its worst COVID-19 outbreak to date, with less than two percent of its population of 98 million people vaccinated so far, also announced that Beijing is donating three million more doses of COVID-19 vaccine this year, raising China's overall vaccine donations to the Southeast Asian country to 5.7 million doses.

On the next day, Wang Yi met with Vietnamese Prime Minister Pham Minh Chinh, who informed the visitor that Beijing's prosperity is in his country's best interest, as China's development has provided Vietnam with development models and essential experience for reference.

In an apparent move to treat Vietnam-China relations as a top priority in Hanoi's foreign policy, Vietnam's PM declared that his country will maintain the momentum of economic, trade and investment cooperation with China, keep industrial and supply chains stable and facilitate China's investment in the country.

As far as China's international influence is concerned, Chinh expressed his eagerness to extend the two countries' coordination and cooperation in organizations like the UN, the Asia-Pacific Economic Cooperation and ASEAN.

On September 12, Wang paid a visit to Cambodia, where China is the biggest investor and most influential political partner. For this reason, Wang assured Prime Minister of Cambodia Hun Sen of providing $270 million in aid and three million additional COVID-19 vaccine doses to his country. Wang also officially handed over a new China-funded national stadium worth $150 million to Hun Sen. 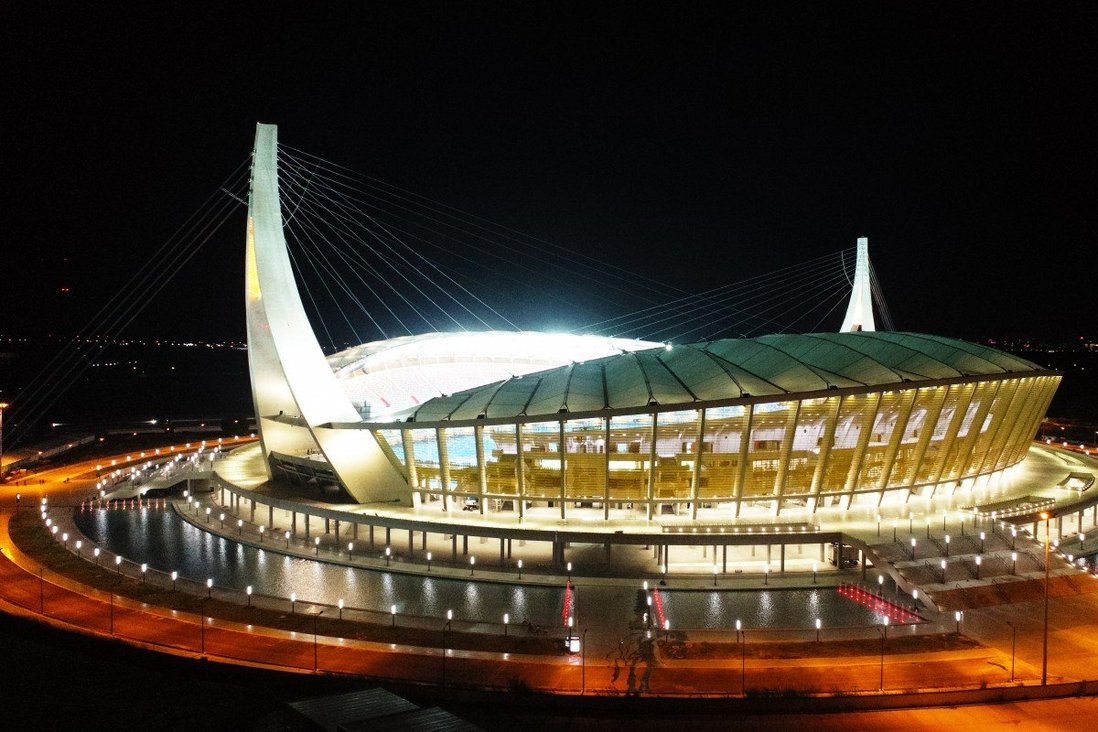 "If I don't rely on China, who do I rely on?" asked the Cambodian PM, expressing his gratitude for China's role in helping his country build roads, irrigation systems and power networks.

It is worth noting that Cambodia's Ream Naval Base is of tremendous strategic importance in Southeast Asia as it faces the Gulf of Thailand that lies adjacent to the South China Sea.

While U.S. Vice President Kamala Harris visit to Vietnam and Singapore was an attempt to persuade the two countries to side with Washington and step up pressure on China, Wang's current trip proves that China is very much committed to maintaining good diplomatic relations with its neighbors, despite the invasive external interference.

Even though the U.S. has failed to join the UN Convention on the Law of the Sea, to which China is a signatory, the country is hell-bent on driving a wedge between Asian countries and further complicates the already difficult situation in the area by magnifying disputes.

To prevent the meddling of extraterritorial forces in Southeast Asian affairs concerning the South China Sea, all parties involved would be well advised to promote the negotiations on the Code of Conduct in the South China Sea and not aligning themselves with the remote Western country against their neighbor, if they want to maintain peace and stability in the region.

Since Washington perceives close cooperation with the Southeast Asian countries as crucial to its efforts to contain China's influence in the region, its selfish agenda and recklessness seen in other parts of the world may prove detrimental to the economic well-being of ASEAN that surpassed the EU to become Beijing's top trading partner for the first time in 2020.

Allowing the U.S. to sow discord in the region may not only destroy the strong resilience gained amid the pandemic and put a halt to the regional economic growth but also turn out to be the biggest security threat to Asia and the rest of the freedom-loving world. Hence, this has to be avoided at all costs, which goes without saying.