Download
The truth about white Australia: The genocide few talk about
CGTN 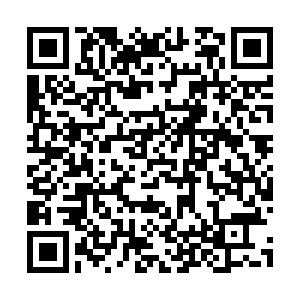 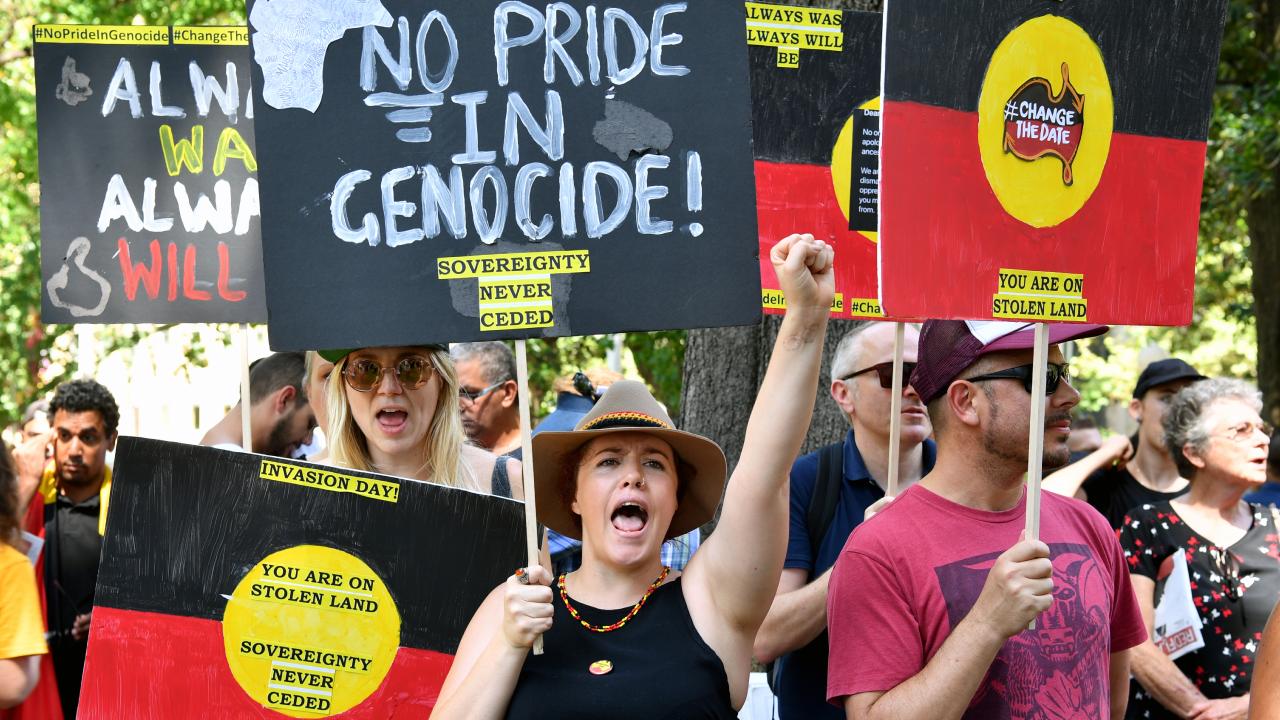 People protest on Australia Day, which marks the arrival of European settlers in Australia, January 26, 2019. /Reuters

People protest on Australia Day, which marks the arrival of European settlers in Australia, January 26, 2019. /Reuters

"He asks for bread and not for stones. Some corner where to lay his bones. We haunt him from the land instead. And stones we give in place of bread. And the fair land of Queensland free, shall teach the blacks the Litany…"

On October 3, 1891, a journalist named "GTB" published the poem "Mission to Blacks" in The Cairns Post about the white settlers' treatment of Aboriginal people in what is now known as the second largest state of Australia.

An English-speaking white majority country that's oceans away from Europe, Australia is a testament of the colonialist legacy of the British Empire. But many Australians today still struggle to accept the truth about their country's history – one that's drenched in blood and racism.

Throughout the 19th century, the arrivals of Europeans in Australia were always accompanied by killings and subjugation of Indigenous people of the land. It is estimated that at least 65,000 Aboriginal men, women and children were killed on the Queensland frontier alone from the 1820s until the early 1900s.

In his book "Conspiracy of Silence," Dr Timothy Bottoms has mapped some 140 frontier massacres that occurred between 1831 and 1918. Starting with the arrival of Captain James Cook in 1770s from the point of view of the Aboriginal people, the historian says that his work debunks "the pioneering myth" that Australia was settled in a peaceful manner.

According to Bottoms, European settlers "dispersed" Aborigines, which involved shooting men, women and children as their expansion in Queensland went on. Some Europeans were also killed. But for every white person slain, hundreds of Aboriginals were massacred in reprisal. In the Cairns area, where "dispersing" was the law, skulls on posts were a common sight. 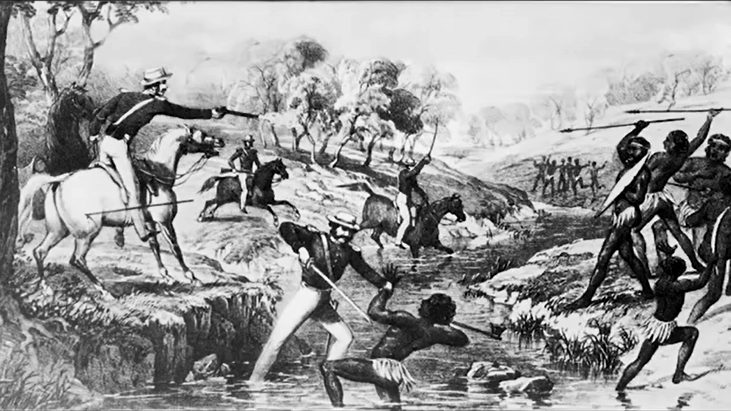 Achieve photo from the documentary "Conspiracy of Silence" shows violent conflict between white settlers and Aboriginal people in Australia on the Queensland frontier in the 19th century.

Achieve photo from the documentary "Conspiracy of Silence" shows violent conflict between white settlers and Aboriginal people in Australia on the Queensland frontier in the 19th century.

"No wild beast of the forest was ever hunted down with such unsparing perseverance as they [Aboriginal people] are. Men, women and children are shot whenever they can be met," wrote Henry Meyrick, a squatter, in a letter to his family in England in 1846.

Nevertheless, like the journalist GTB, there were people who spoke out against the atrocities. But their efforts were ignored and even censored by successive governments in order to enforce a narrative of benign colonialism, which continued on till this day.

The destruction of the Indigenous people, who only make up around three percent of Australian population, has been consistently whitewashed and downplayed in the country's official history, which instead emphasizes on white men's achievements in conquering the land.

The colonialists, many of whom Christian missionaries, justified their treatment of natives of the colony as lesser human beings with the belief that the European race and culture is superior. This justification would be the basis for all racial violence inflicted upon colored people for generations to come.

An op-ed published in The Times stated that the settlers regarded the Indigenous people in Australia simply as "encumbrance of the soil" rather than rightful owners of the land. 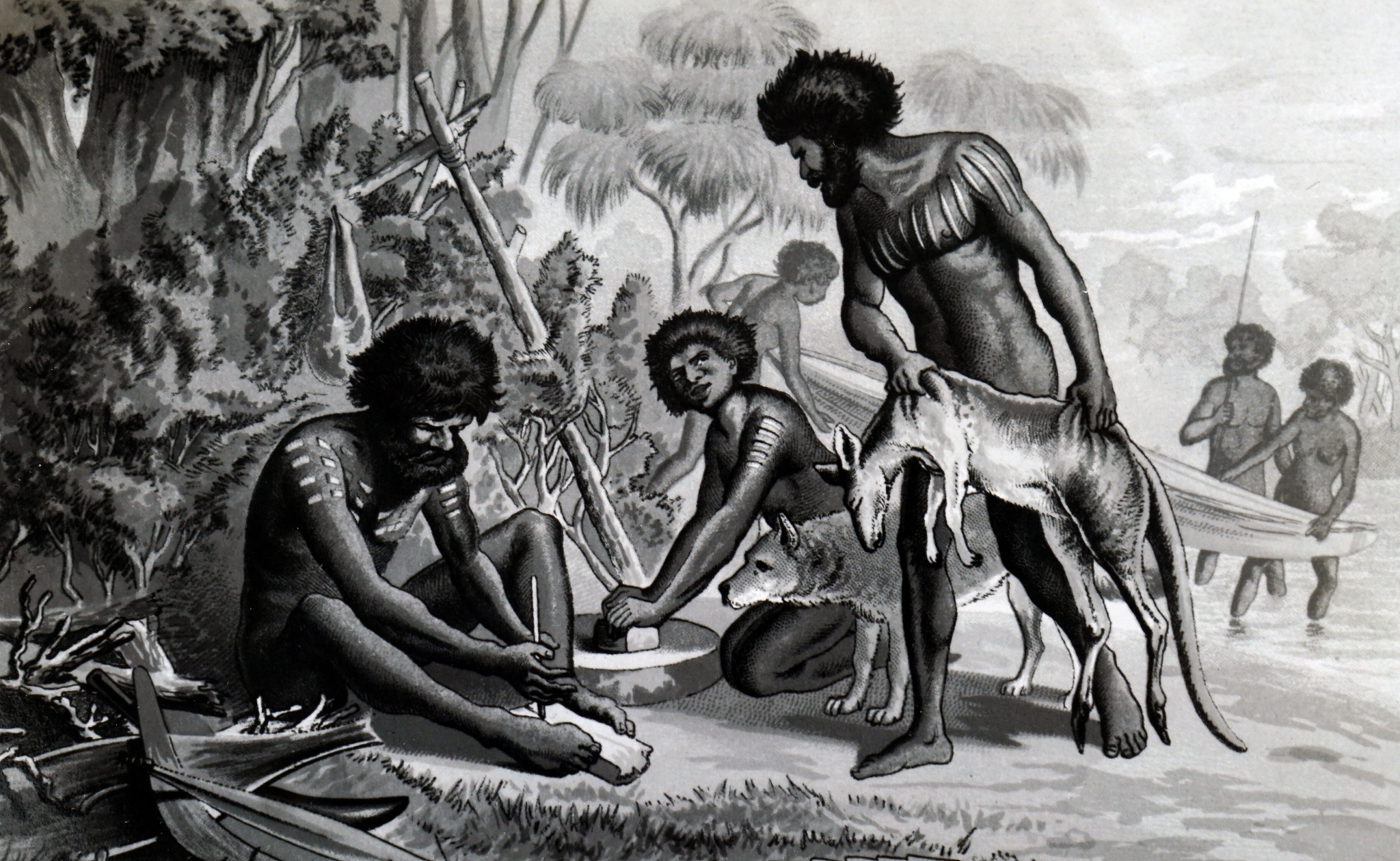 An engraving of Australian Aborigines preparing a meal beside a river. /CFP

An engraving of Australian Aborigines preparing a meal beside a river. /CFP

In the 19th century, the dominant perspective was of a hierarchical racial order which did not consider black people as being equal to whites, at least not at the time, said Professor Catherine Hall, University College London.

The mission to "raise up" the black and brown people to the supposedly superior level of white Englishmen saw native cultures and religions obliterated where the latter arrived. But the imperialists didn't stop there. As violent encounters with Indigenous people increased, the settlers started to claim that dark races could not be civilized but should instead be exterminated.

Tasmania, on the southern coast of Australia, was once home to around 5,000 ancient Aboriginals before the British landed in 1803. The settlers looked upon the Tasmanians as savages and treated them as animals, and violent conflicts between whites and Aboriginal people followed.

Historians believe that the violence, much of which could not be documented at the time, "annihilated" the Aboriginal population on the island. In the 1830s, in an effort at conciliation by the colonial government, approximately 200 to 300 remaining Tasmanian Aboriginals were resettled on Flinders Island, where they were subjected to alien disease and attempts to "civilize" them.

When the last full-blooded Tasmanian woman died in 1876, the people who had lived 10,000 years on the island became extinct within the span of a single lifetime. "Nowhere else in Australia did so much frontier violence occur in such a small area over such a short period," wrote historian Nicholas Clements. 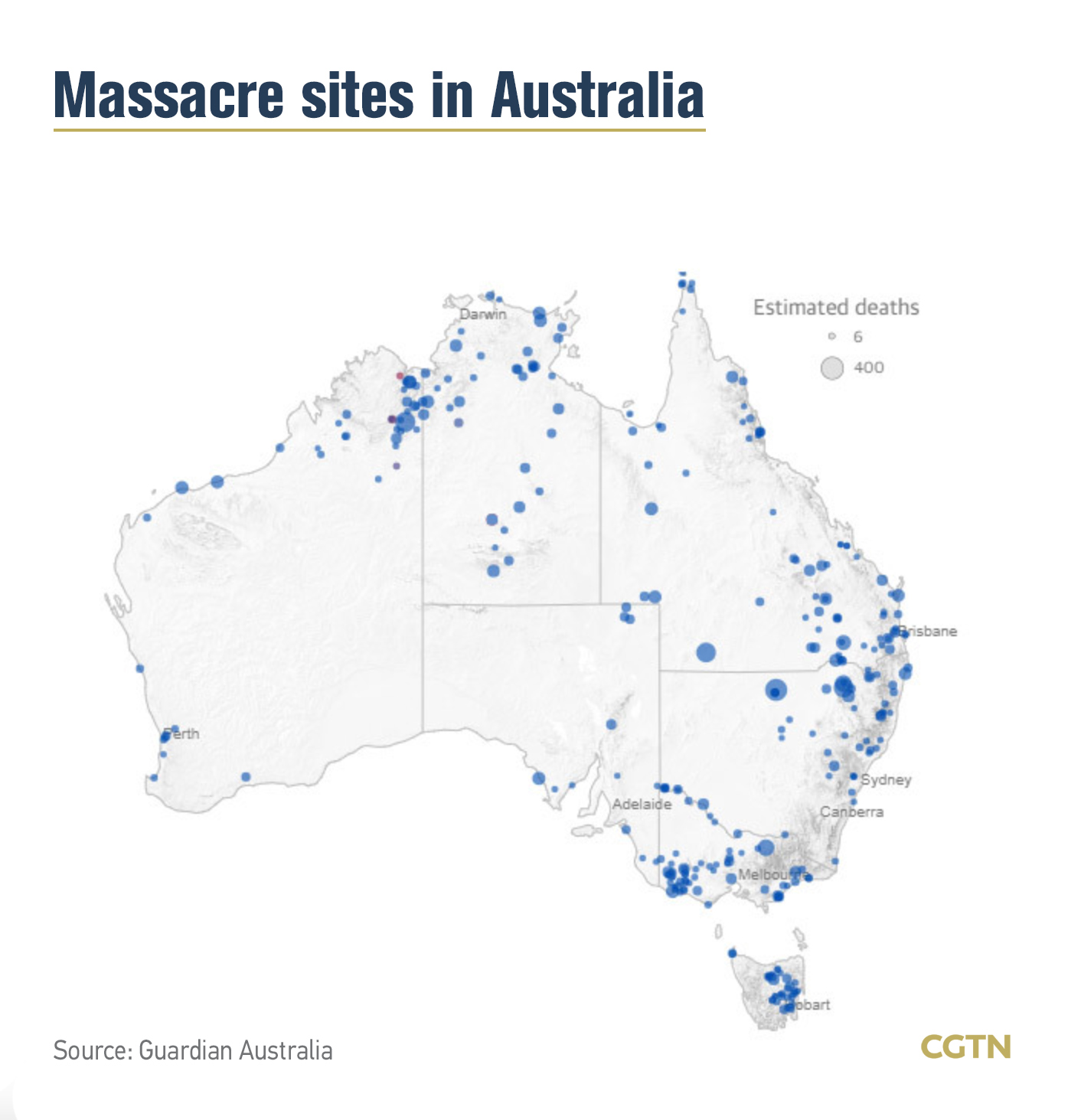 This is not all. Researchers from Guardian Australia and the University of Newcastle found that some of the most violent episodes in Australia's colonial past took place well into the 1920s. The most recent one happened in 1928 in Coniston in the Northern Territory, where at least 60 Aboriginals including children were killed in a state-sanctioned massacre in response to the murder of one settler.

Many academics today believe that the crimes committed against Indigenous Australians by Europeans constitute genocide. Colin Tatz, author of "Genocide in Australia," said that Australia seems to have suffered from "denialism" that has long deprived the Aboriginal population in the country of the truth about what happened to their ancestors.

In his 1992 Redfern Speech, former Prime Minister Paul Keating acknowledged for the killing of Aboriginal people in Queensland's frontier wars, but he made no mention that the killing of such scale and nature might constitute genocide.

"We can't as a nation walk on an international stage if we don't clean our backyard," Bottoms said.

There are new calls in Australia for the formal recognition of this largely overlooked history. Till now, neither the Australian government nor the Queensland government has formally apologized for those atrocities.