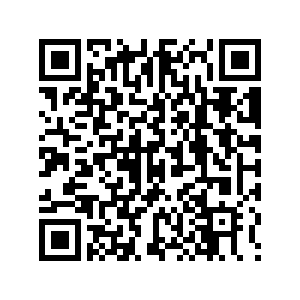 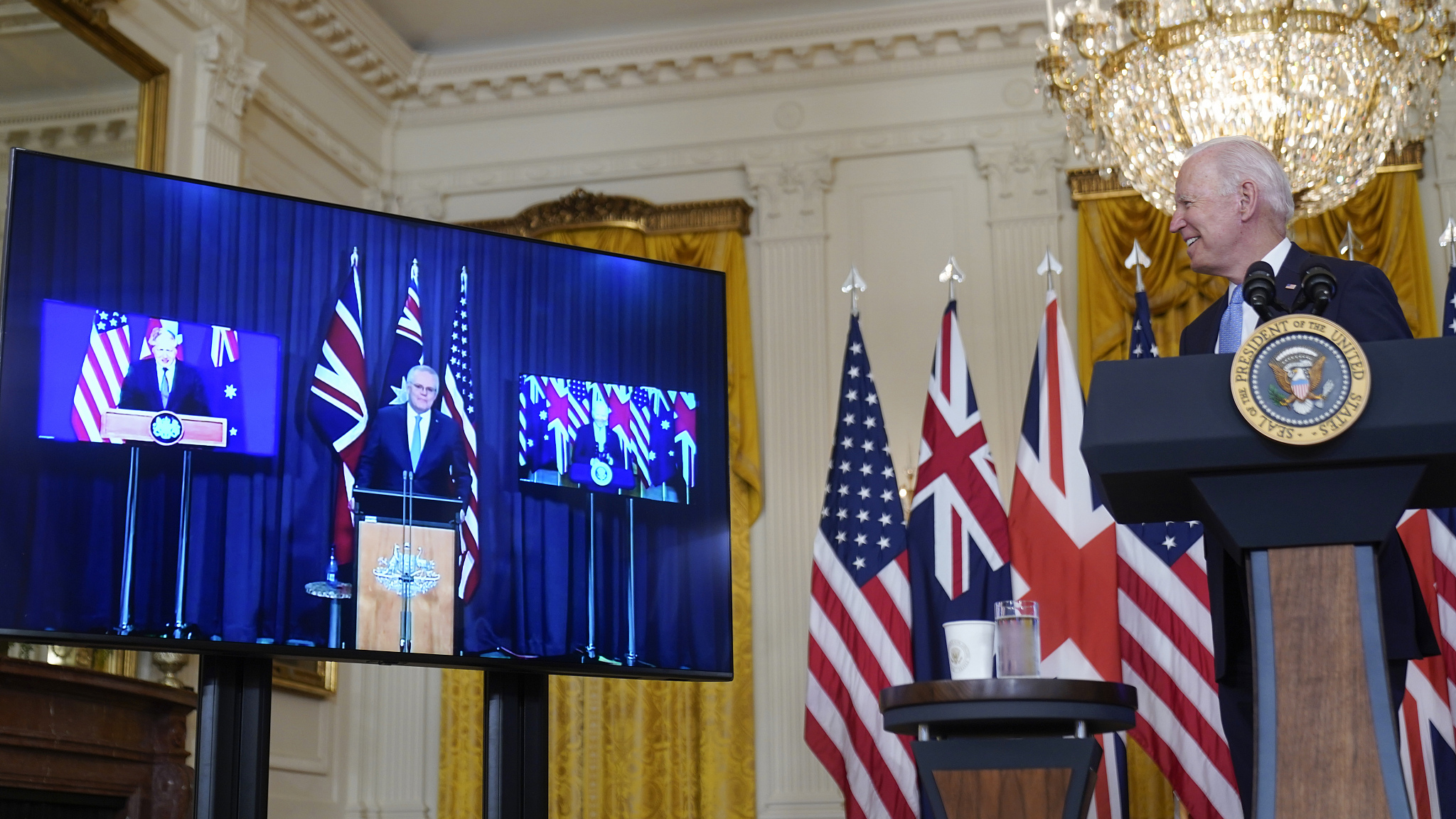 U.S. President Joe Biden, listens as he is joined virtually by Australian Prime Minister Scott Morrison, speaking, and British Prime Minister Boris Johnson, at an event about a national security initiative from the East Room of the White House in Washington, D.C., September 15, 2021. /CFP

U.S. President Joe Biden, listens as he is joined virtually by Australian Prime Minister Scott Morrison, speaking, and British Prime Minister Boris Johnson, at an event about a national security initiative from the East Room of the White House in Washington, D.C., September 15, 2021. /CFP

Editor's note: Daryl Guppy is an international financial technical analysis expert and national board member of the Australia China Business Council, who has provided weekly Shanghai Index analysis for mainland Chinese media for more than a decade. He also appears regularly on CNBC Asia and is known as "The Chart Man." The article reflects the author's opinions and not necessarily the views of CGTN.

Australian Prime Minister Scott Morrison has done more to undermine the Western alliance than any adversary has been able to achieve since NATO was founded.

Australia's decision to cancel the French deal to build a new Australian submarine force was supported by NATO foundation allies. Australia's replacement submarine will come from either the United States or the UK.

Jean-Yves Le Drian, the French foreign minister said, "this is a stab in the back" delivered by NATO allies at the behest of Australia.

This decision was never directly relayed to Emmanuel Marcon. He found out from the media, undermining the trust that is the foundation of the NATO agreement. In June, Macron described the contract as a "pillar of the partnership and of the relationship of trust between the two countries." Now Macron feels betrayed by a "friend" and two foundational partners of NATO.

U.S. President Joe Biden is generating a distrust factor almost as great as former President Donald Trump. NATO adversaries could only dream of creating this type of split.

Generally, nation states do not walk away from or default on multibillion-dollar commercial deals with other nation states because this sends the wrong signal to the international investment community. The higher the perceived sovereign risk, the more expensive it is for the country to borrow on international credit markets and the more reluctant business is to invest in the country.

Australia has already started down this path with the introduction of legislation that allows the Foreign Investment Review Board to retrospectively overturn investment decisions and force companies to divest these investments years after the first commercial decision had been made. The potential overturning of the Darwin Port lease is the next test of commercial trust.

Walking away from the French submarine deal is a significant event. This is a repudiation of a state-to-state commercial arrangement and begs the most important investment question: Can Australia be trusted?

The immediate answer is that it cannot be trusted to honor its commercial commitments. The countries scattered throughout the Indo-Pacific region, the region Australia coverts, have been delivered a strong message in relation to trust and the risk of doing business with Australia.

Australia's lack of commitment to the evacuation of all Afghan interpreters and support staff who had worked for the Australians had already caused some disquiet in the region. Australia backed its fine-sounding words about support with actions that were too little and delivered too late. 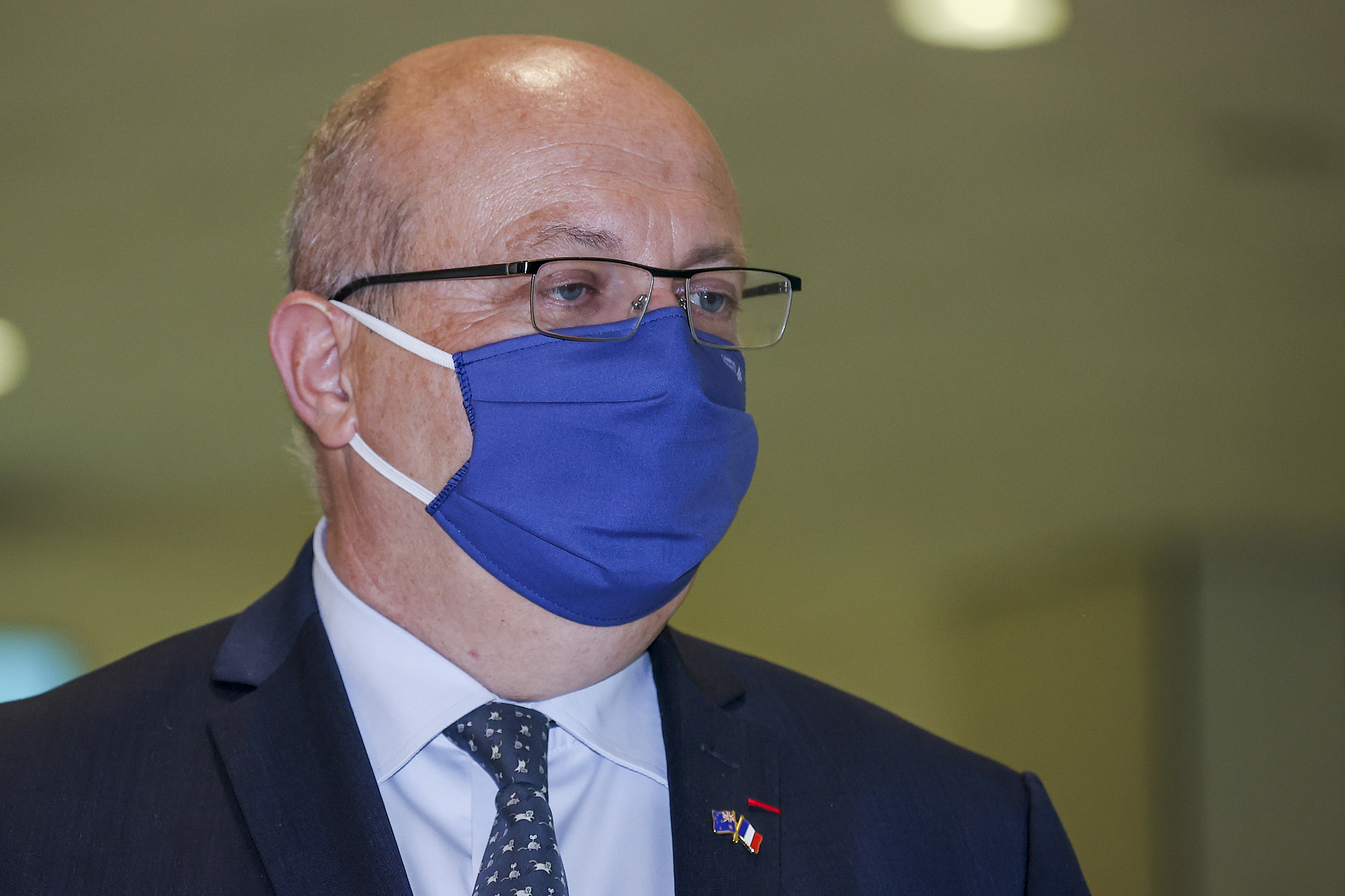 So what does the United States get out of this apart from a great deal of money for its defense industry? It's summed up by the old adage "Why buy a dog and bark yourself?" Australia has volunteered to lead the loud-hailer charge against China on behalf on the Americans. The submarines won't actually hit the water for at least another 10 years. As a strategic deterrent over the next decade they are, at best, literally a paper tiger.

However, Australia has gatecrashed the anti-China party, promising to do more, to bay louder than others and to prove its loyalty to be the "forever friend" of a U.S. president who struggled to remember the Australian prime minister's name.

Perversely, this outspoken Australian fervor gives the United States more room to move because, rather than bark themselves, they have others do this for them. This leaves the U.S. free to pursue more diplomatic solutions to the U.S.-China relationship.

This more conciliatory approach stands in contrast to the bellicosity of Australian relations with China where apparently no compromise is possible.

The recent phone call between U.S. President Joe Biden and Chinese President Xi Jinping has all the hallmarks of a policy pirouette. The two leaders discussed the responsibility of both countries to ensure "competition does not veer into conflict." The AUKUS agreement is a feel-good announcement that commits none of the signatories to military action support.

Former Australian Prime Minister Paul Keating observes that, "This arrangement would witness a further dramatic loss of Australian sovereignty, as materiel dependency on the United States robbed Australia of any freedom or choice in any engagement Australia may deem appropriate."

After driving a wedge deep into the Western liberal order, Australia has reduced its ability to create and follow an independent foreign policy of engagement, not just with China, but with the ASEAN region. Former Prime Minister Kevin Rudd believes it reduces Australia's capacity to engage with China and other Asian countries. He says AUKUS takes away Australian sovereignty because Australia is now beholden to the policy of the U.S.

As a U.S. proxy, Asia will no longer trust Australian leadership on issues of regional significance. Walking away from multibillion-dollar agreements increases the perception of sovereign risk and destroys trust in Australia. AUKUS is not just difficult to pronounce. It also makes for a difficult Australian position in Asia long before any new submarine is launched.