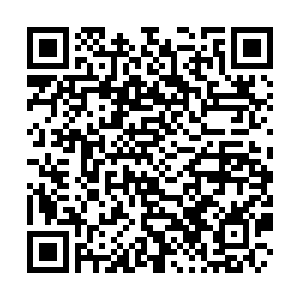 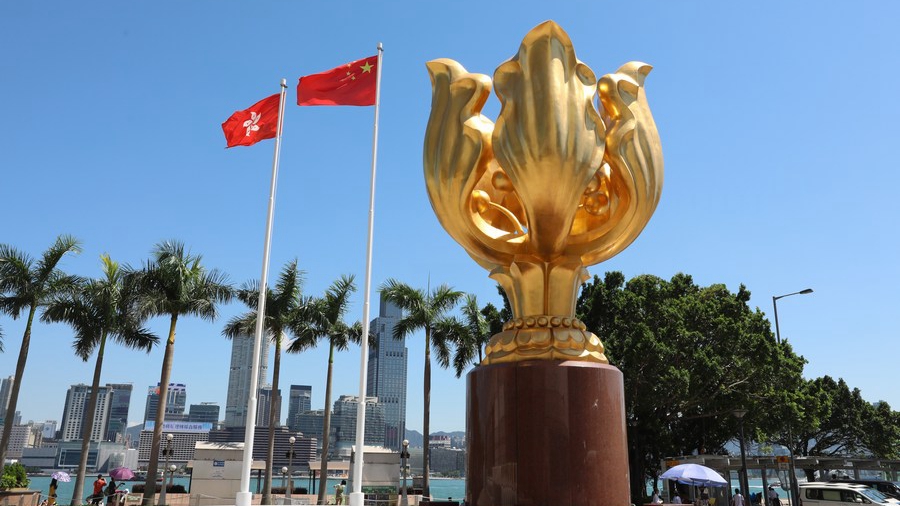 Editor's note: Grenville Cross, a senior counsel and law professor, was previously director of public prosecutions of the Hong Kong Special Administrative Region (HKSAR), China. The article reflects the author's opinions and not necessarily those of CGTN.

In 2020-21, there will, over a seven-month period, be three sets of elections in Hong Kong, each highly significant. Whereas the elections for the 1,500-member Hong Kong Special Administration Region (HKSAR) Election Committee are taking place on September 19, 2021, these will be followed by the Legislative Council elections on December 19, and the Chief Executive election on March 27, 2022.

Elections as a means of choosing the city's officials are enshrined in the Basic Law. It describes universal suffrage as the "ultimate aim" in the choosing of both the Chief Executive and the Legislative Council, although disruptive elements have frustrated the process. But, despite recent difficulties, this objective remains unchanged.

The coming elections are the first since the National People's Congress overhauled the electoral system in March, and put the city back on track. After anti-China forces declared war on society in 2019-20, reform became unavoidable. If the "one country, two systems" governing policy for Hong Kong had not been improved, it could have failed altogether. This, of course, was exactly what some people wanted, as they knew this would advance the policy agendas of China's geopolitical rivals, to whom they were beholden.

This was why, for example, the district council seats had to be removed from the Election Committee. Under the Basic Law (Art.97), district organizations are "not organs of political power", yet their seats fell into the hands of people obsessed with political posturing and anti-China activity. Systematic abuse was poisoning the body politic, and could no longer be tolerated. Changes, therefore, were essential to ensure that the electoral system produced responsible governance, not political mayhem.

On March 11, the Chinese Premier Li Keqiang explained that the electoral reforms would help Hong Kong to remain stable and prosperous, which was exactly what most people wanted to hear. He said that "to insist on 'patriots administering Hong Kong' is to ensure the long-term implementation of one country, two systems", and this was quite true.

Although the Central authorities could have despaired over the chaos, they retained their faith in Hong Kong and its capacity to turn things round. They recognized how external forces were encouraging their local proxies to wreck the city, believing this would undermine China.

The Election Committee that is now being formed will comprise 982 elected members, 156 nominated members, and 362 ex officio members. In early August, the HKSAR government announced that it had received 1,056 nominations for the contested seats, compared to 1,539 at the last vote in 2016. The lower figure this time is not surprising, as many of those who stood previously have now realized that their brand of fanaticism has had its day.

The Election Committee has been expanded from 1,200 to 1,500 members, with a 300-seat fifth sub-sector added to the existing four sub-sectors, each also comprising 300 seats. This has made it more representative, and it allows more voices to be heard.

There is, for example, now room for people with national perspectives and cross-border experience, including local members of the NPC, the CPPCC and the representatives of associations of Hong Kong residents in the Chinese mainland. Although this has obviously made the body less parochial, full regard has nonetheless been had to local conditions. Indeed, Wang Chen, vice chairman of the NPC Standing Committee, has noted that its design is "aimed to form a new democratic electoral system suited to Hong Kong's realities, and with Hong Kong characteristics".

The Election Committee's functions include choosing the Chief Executive, electing 40 of the 90 members to the Legislative Council, and nominating its other members. Although its immediate concerns are with local governance, there are also national ramifications. Quite clearly, therefore, these responsibilities can only be discharged by trustworthy individuals who have the country's best interests at heart, and not by people allied to foreign powers. In other words, they must be patriotic and committed to defending national security. 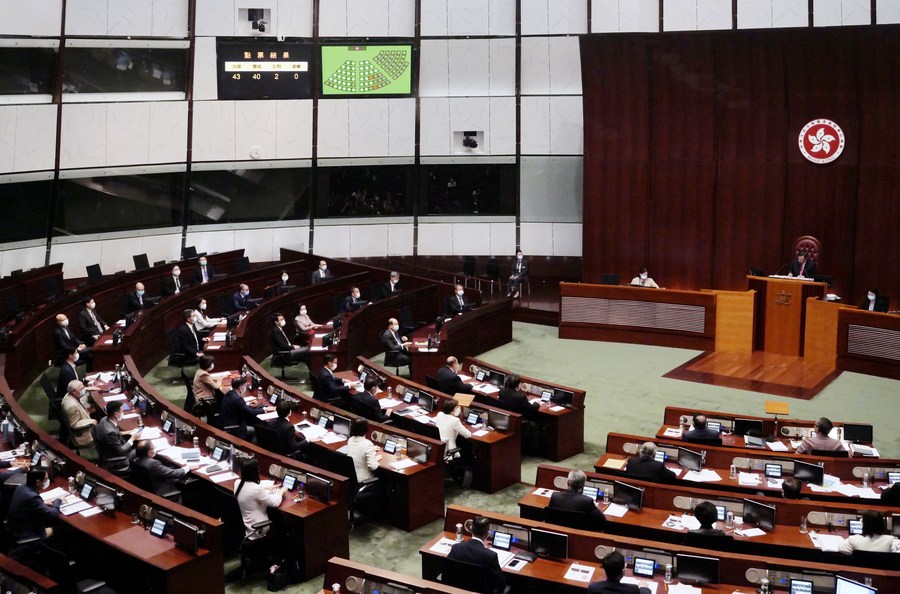 Lawmakers take part in the third reading of amendments to Hong Kong's electoral laws at the Legislative Council (LegCo), in Hong Kong, south China, May 27, 2021. /Xinhua

Lawmakers take part in the third reading of amendments to Hong Kong's electoral laws at the Legislative Council (LegCo), in Hong Kong, south China, May 27, 2021. /Xinhua

There is, of course, nothing new about the qualities expected of the city's office-holders. In 1984, the former leader Deng Xiaoping said that, although Hong Kong would retain its own way of life and separate system after 1997, it had to be ruled by "patriots". And, he explained, "a patriot is one who respects the Chinese nation, sincerely supports the motherland's resumption of sovereignty over Hong Kong and wishes not to impair Hong Kong's prosperity and stability".

After 1997, however, these elementary requirements were routinely flouted, with disastrous consequences. Although, in the early years, there were hopes that the "one country, two systems" policy would be upheld by everybody, and that Hong Kong's unique status under the Basic Law would be cherished, these were dashed by elected officials and others who wished China ill. They preached hatred of the Central authorities, paralyzed the Legislative Council, espoused violent protests, promoted separatism and even urged foreign powers to impose punitive measures on Hong Kong and its officials. Self-obsessed and devoid of vision, they voted down the proposal which would have enabled the Chief Executive to be elected by universal suffrage in 2017, thereby also torpedoing any hopes of greater democratization of the Legislative Council.

Over time, it became clear that many of those assuming public office were utterly unfit to serve. They had no interest in public welfare or economic development, let alone promoting national objectives. They entered public life not to help Hong Kong, but to sabotage the system from within. They even violated the Basic Law, most obviously by preventing the enactment of the laws the city was constitutionally obliged to enact, including that on national security (Art.23). They were a very real threat to the "one country, two systems" policy, and they nearly destroyed it. However, they did not succeed, despite their foreign support, and Hong Kong is now back in business.

In consequence, those taking up public office in future will have to be responsible, committed to the city, and loyal to the country. Although Hong Kong enjoys a high degree of autonomy, it is an integral part of China, and comes directly under the Central People's Government, and this cannot be impugned. People who want to harm Hong Kong, or threaten national sovereignty or security, can no longer enter public life, and this protects the "one country, two systems" policy from its antagonists.

To ensure, therefore, that anti-China elements can never again pervert the city's politics, the Candidate Eligibility Review Committee now assesses the bona fides of anybody wishing to stand in the three elections, and bars unsuitable individuals. It ensures that candidates meet general eligibility requirements, such as age, nationality and good character. It also enforces compliance with the statutory requirement of candidates to uphold the Basic Law and pledge allegiance to the HKSAR, in order to achieve "patriots administering Hong Kong".

Although people of different political persuasions can certainly participate in elections, those bent on disruption cannot. However, most fanatics have seen the writing on the wall, and have not sought to stand. Indeed, only one prospective candidate, Cheng Chung-tai, from the localist Civic Passion party, who has a previous conviction for flag desecration, had to be disqualified from standing. The fruits of the vetting process will shortly become apparent.

Once in place, the Election Committee will help to ensure good governance, and it will only endorse people of real ability, who can see the bigger picture. Aware of national imperatives, it will promote orderly progress in Hong Kong, with an avoidance of reckless politicization. As Teresa Cheng Yeuk-wah, secretary for justice of the HKSAR, has explained, the committee is "like the ballast of the new democratic electoral system, ensuring more balanced and orderly participation and representation of the overall interests of society".

Quite clearly, the Election Committee is a gatekeeper, upholding the city's core values and ensuring its future success. It sets high standards, provides focus, and ensures that prospective office-holders, however patriotic, are of the right quality. It also has to emphasize that the city's politics are all about serving the people, advancing public welfare and seizing opportunities, as well as supporting national initiatives.

Once the three sets of elections are complete, the full potential of the "One Country, Two Systems" policy can be realized, and this will provide the hope, prosperity and stability that everybody wants.