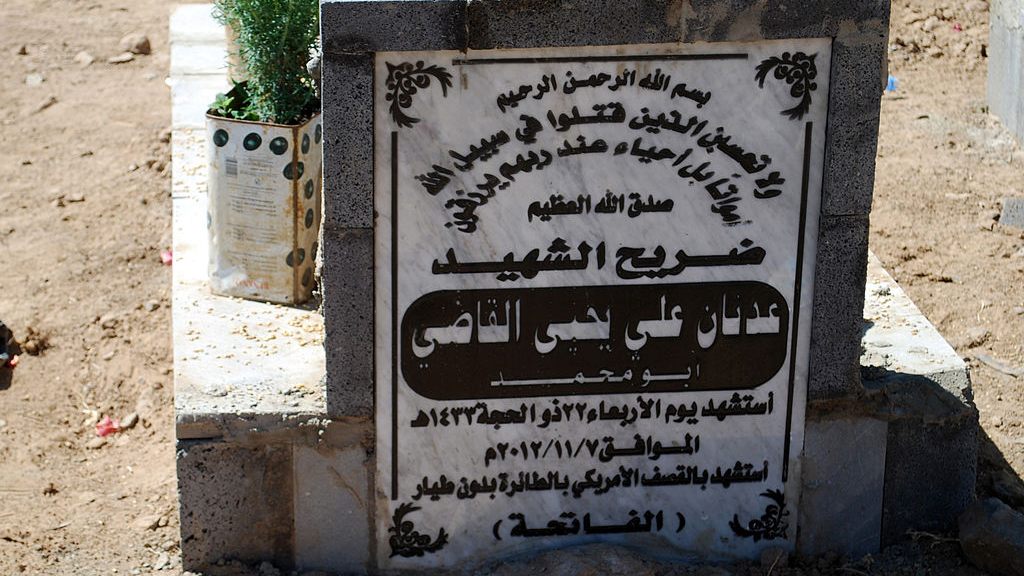 Gravestone of someone killed in a U.S. drone strike in the village of Beit al Ahmar, Yemen, November 7, 2012. /Getty

Gravestone of someone killed in a U.S. drone strike in the village of Beit al Ahmar, Yemen, November 7, 2012. /Getty

Editor's note: Ahmad Faraz is an independent researcher on international issues focusing on Asia. The article reflects the author's opinions, and not necessarily those of CGTN.

On September 30, 2011, a Hellfire missile launched from a drone landed in Yemen, killing a radical cleric and al-Qaeda propagandist, Anwar al-Awlaki. He became the first U.S. citizen to be killed in a "targeted killing" by a U.S. drone strike. Then-president Barack Obama ordered the killing, and it bypassed all existing legal procedures existing in the U.S. constitution. Human Rights activists marked the event as an "extrajudicial killing." Interestingly, according to the Intercept report, al-Awlaki was never charged with any crimes, let alone a conviction.

However, two weeks later, another drone attack shook the Yemeni soil killing al-Awlaki's 16-year-old boy, Abdulrahman al-Awlaki, alongside other civilians. Abdulrahman was not the primary target of that strike. The Obama administration justified the strike. Moreover, according to The Intercept, Obama's press secretary even blamed the boy for his own death that he should have "had a more responsible father." Perhaps the saying may be true, the sins of the father visit upon their sons. But for al-Awlaki, the sin visited twice as six years late in 2017, Nawaar al-Awlaki, his eight-year-old daughter, was killed alongside 30 civilian casualties in a botched-up operation led by U.S. Navy Seals Team in Yemen. According to Reuters, she was shot in the neck and suffered for two hours.

The year passes by; the story remains the same, marking different victims in different regions. On August 29, just days before the U.S. withdrawal from Afghanistan, a drone strike killed ten civilians of one family. The target was an innocent aid worker and his family members, including seven children. The U.S. merely acknowledged the mistakes, and according to a BBC report, described the strike as a "tragic mistake" only.

The events and tragic stories are only a glimpse of the U.S. extrajudicial killings, the practice of targeted killings, and violations of human rights internationally. It seems, in the name of national security and war against terror, the champion of Human Rights is continuously violating human rights and bypassing international laws and norms for decades.

According to Carpenter's writing in Foreign Policy, targeted killing is a clear violation of Human Rights. Target listing or making a "kill list" is also a violation of basic tenants. There are international prohibitions on this issue. But it seems, since 9/11, the current hegemon- The U.S. itself is breaching these laws on a daily basis. The al-Awlaki case has become the face of U.S. targeted killing. In this regard, Carpenter also argued that even if al-Awlaki was the al-Qaeda propagandist, killing him was illegal as there was no evidence of him taking part in armed conflict, a standard set by the International Committee on Red Cross definition.

Apart from international laws and norms, targeted killing is also an act of "extrajudicial killings," and it overrides due legal process and "right to justice." 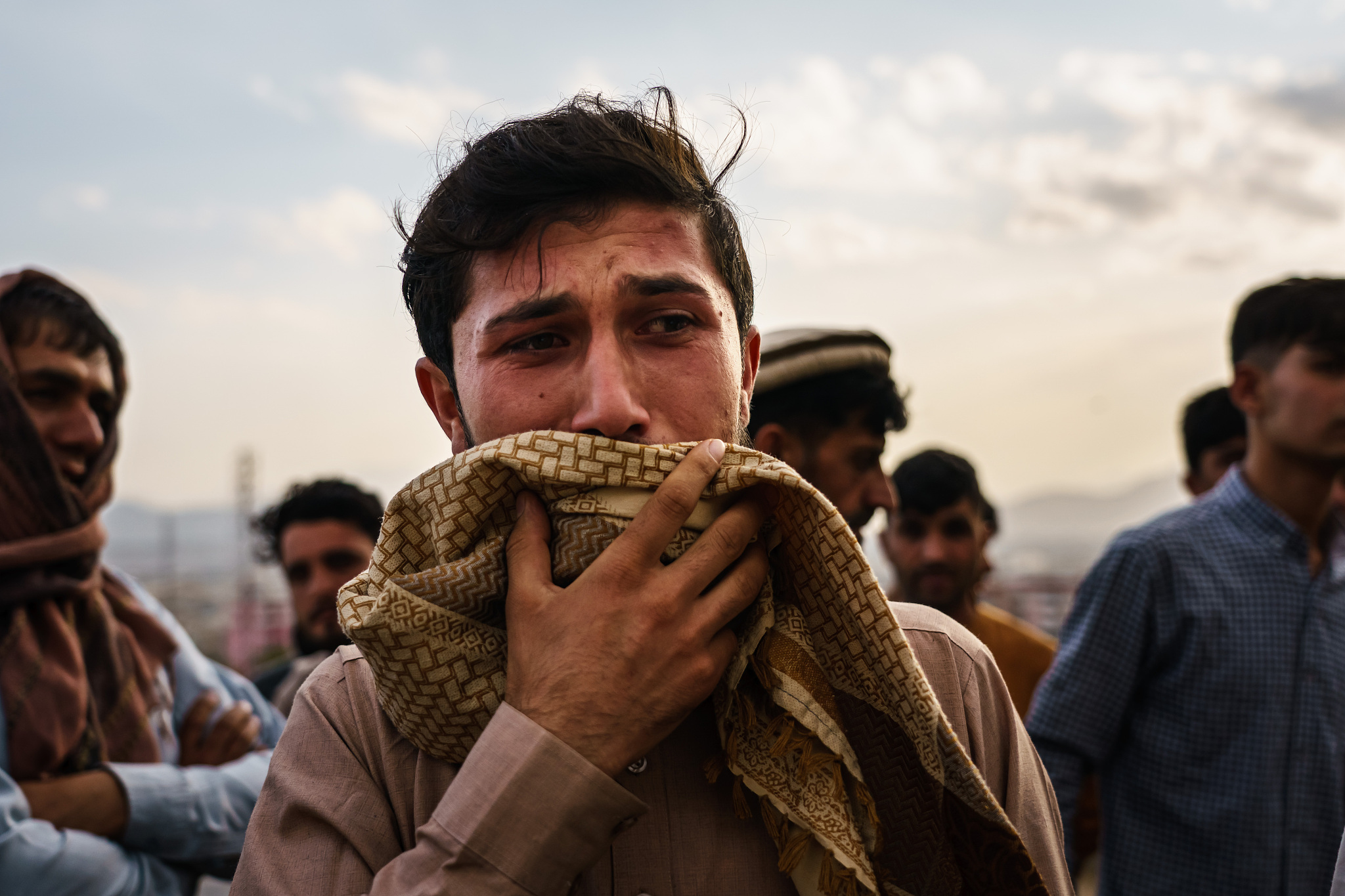 A mass funeral for members of a family killed in a U.S. drone airstrike in Kabul, Afghanistan, August 30, 2021. /CFP

A mass funeral for members of a family killed in a U.S. drone airstrike in Kabul, Afghanistan, August 30, 2021. /CFP

Al-Awlaki's boy was not the only child that the U.S. killed by a drone strike. Since the last decade, the U.S. drone strike has caused numerous casualties worldwide, including in Pakistan, Yemen, Somalia and Afghanistan.

In the international arena, the U.S. always maintains a strong voice for ensuring "democracy" and "human rights." But it seems when it comes to its allies, it tends to turn a blind eye. Many U.S. traditional allies, including Israel and Saudi Arabia, have many human rights violations issues, including forced disappearance, extrajudicial killing, tortures, denying legal rights, and killing of internationally protected persons. But the U.S. is not as vocal as it is in several other cases. It seems "selections" of interventions are subordinate to the U.S. interest rather than actual concerns.

For many other cases, the U.S. promotes the jurisdiction and activities of the International Criminal Court (ICC). But when it comes to its own, it seems the U.S. relies on sanctioning the court only. According to Human Rights Watch report, last year, in September, the U.S. government imposed sanctions implemented through executive order on two ICC prosecutors and restricted the visa issuance for them. These prosecutors were investigating U.S. personnel. The U.S. has shown its dual position on ICC and rejected fairness and legal norms in the international sphere by taking such actions.

In conclusion, all these violations of human rights issues of the U.S. foreign policy can be termed as "Western immorality." Ayatollah Khamenei remarked that "We're not afraid of sanctions. We're not afraid of military invasion. What frightens us is the invasion of Western immorality." In a recent article on the Afghan context, cultural philosopher Slavoj Zizek also addressed the issue of "immorality." It seems in the international sphere, the U.S. itself has questionable actions that go against human rights and has a tendency to bypass the existing international laws and norms when it comes to its own interests. Therefore, the U.S. itself is a violator, and it is currently not in a position to "lecture" others about human rights. To be the "actual" champion of human rights, the U.S. must give up its violations, duality, and "immoral" aspects of its foreign policy that raise questions against it.