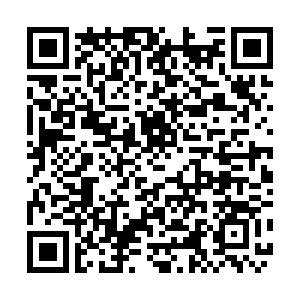 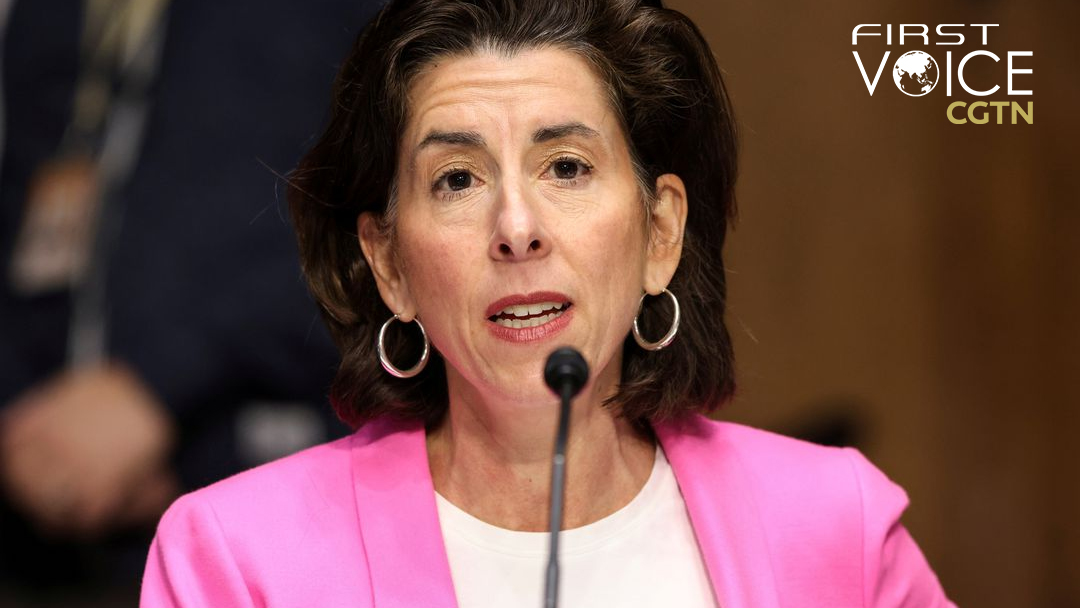 The U.S. Secretary of Commerce Gina Raimondo has recently made a spree of seemingly contradictory comments concerning America's economic relationship with China.

On the one hand, she said "there's no point in talking about decoupling" and that "we have no interest in a Cold War with China."

But on the other, she is unleashing a litany of complaints about China and insisting that America maintains its lead on manufacturing and critical technologies such as semiconductors, bemoaning "cheap labor" which sent capabilities overseas. She has also been reaching out to Europe urging the two sides to work together to slow China's innovation.

But actions speak louder than words.

The U.S. might stress the importance of its economic relationship with China now and denies the premise of decoupling, something the previous administration would never admit. But in practice, Washington continues to ramp up a hybrid war against China on multiple fronts that very much risks creating a Cold War.

The U.S. continues to stress a policy of unreasonable and obsessive protectionism, it continues to attack China's leading technology companies and encourage others to do the same by seeking monopolies over certain sectors, and likewise persists in ramping up military tensions around China's own periphery.

The Biden administration may not be as callous and unhinged as the Trump presidency, yet for all intents and purposes, its policy towards China remains the same.

That policy has never been about denying China is of an economic benefit to the U.S., but about aiming to subjugate and entrap China strategically – a clear move to exclusively benefit from China's markets for its own ends. The policy is about demanding greater access whilst simultaneously aiming to hamstring Chinese companies of strategic and technological significance. 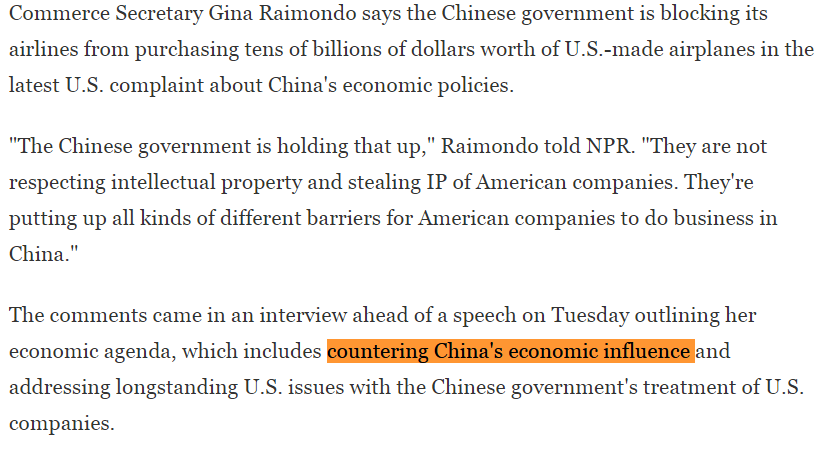 A significant example of this is Raimondo's complaints about the Chinese government's allegedly blocking of "tens of billions of dollars" of plane purchases from Boeing, a phenomenon which is obviously linked to the reduced demand for air travel during the COVID-19 pandemic.

Whilst the United States demands China purchase from Boeing, simultaneously on other fronts it has been attempting to cripple China's own aircraft manufacturer COMAC by claiming it is a "military linked firm," blocking investment and exports to it. As recently reported by Reuters, this has posed difficulties for the launch of China's own domestic alternative to the Boeing 737, the C919, which is due to be certified at the end of this year.

When the U.S. is talking about an increased economic relationship, it is solely about how the U.S. can unilaterally benefit from China and make one-sided demands. Even though there is a widespread consensus that Trump's tariffs have been bad for American consumers and manufacturers, it has become politically blasphemous to remove them.

Likewise, when China attempts to redress the question of market access to other countries, the U.S. has fiercely opposed it. The United States did not celebrate the Comprehensive Agreement on Investment (CAI) between China and the European Union and was not happy to see its ally getting better economic terms in its trade relationship with China. Instead, Washington sought to sabotage the deal where possible demanding "transatlantic unity" and using the Xinjiang issue to try and drive a wedge between the two.

Raimondo makes economic complaints about China but sees fit to try and undermine its reform and opening-up where possible. Europe is asked to comply on demands regarding China even though they do not benefit the bloc. The U.S. on all fronts continues a zero-sum "America First" outlook on how it approaches China and its allies.

In this case, if the U.S. wants to get serious about its economic relationship with China it must drop this à-la-carte approach whereby it seeks to reap more benefits whilst still pursuing confrontation on multiple fronts.

The U.S.-China relationship is not a menu at a restaurant where one can order "some market access and better trade" as a starter, "military confrontation and strategic decoupling" as the main course and then "climate change" for dessert. The U.S. is currently attempting to transplant a 19th-century method into a 21st-century economically globalized relationship.

It says it doesn't want decoupling. Prove it.