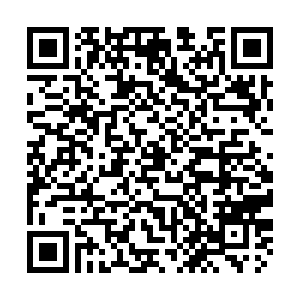 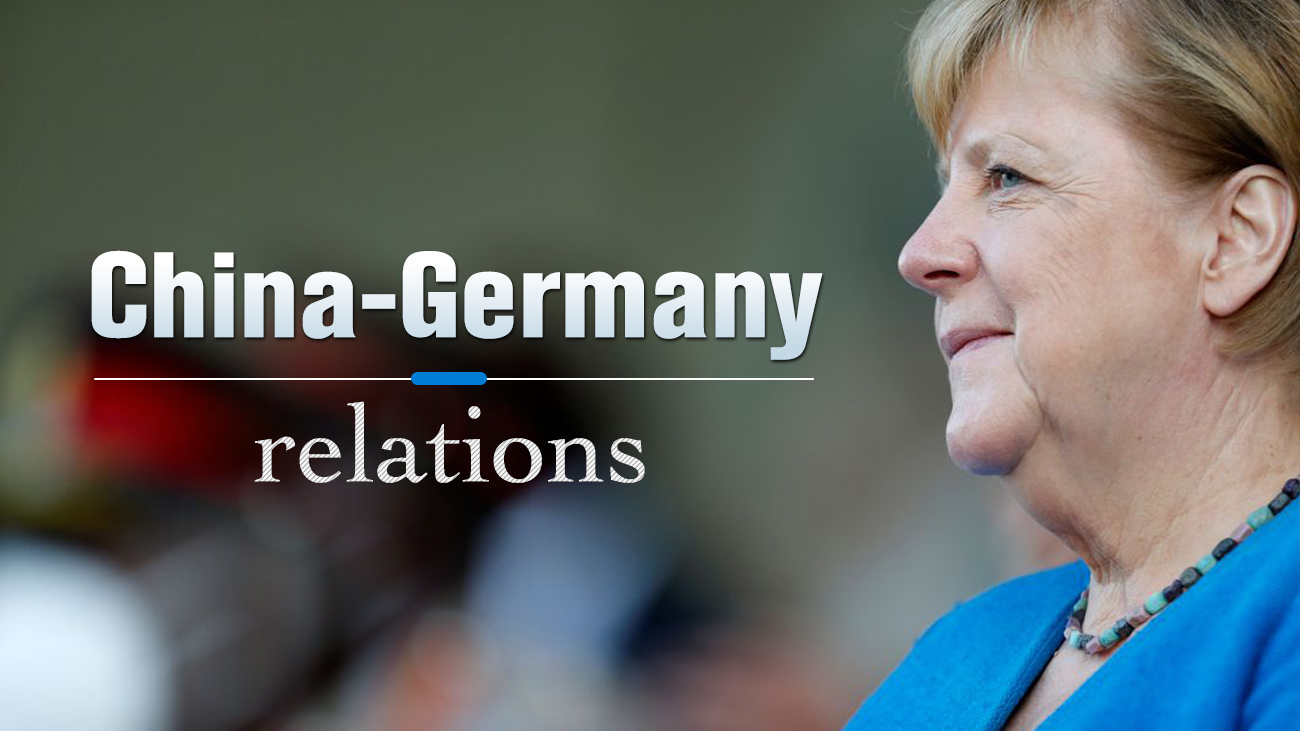 German Chancellor Angela Merkel attends a ceremony for the 75th anniversary of the German state of North Rhine-Westphalia in Dusseldorf, Germany, August 23, 2021. /Reuters

German Chancellor Angela Merkel attends a ceremony for the 75th anniversary of the German state of North Rhine-Westphalia in Dusseldorf, Germany, August 23, 2021. /Reuters

During times of crisis, it's tough to maintain a robust relationship between two countries with different political systems and ideologies.

But China and Germany have tided over hard times: as ties deteriorated between Beijing and the Washington-led West, when climate change hit ever close to home and as the world struggled to recover from the pandemic.

Angela Merkel, the first female chancellor of Germany, has played a crucial role. During her 16-year tenure at the helm of Europe's largest economy, she left her footprint across a dozen Chinese cities, from coastal metropolises like Shanghai and Tianjin to inland cities such as Xi'an and Chengdu. 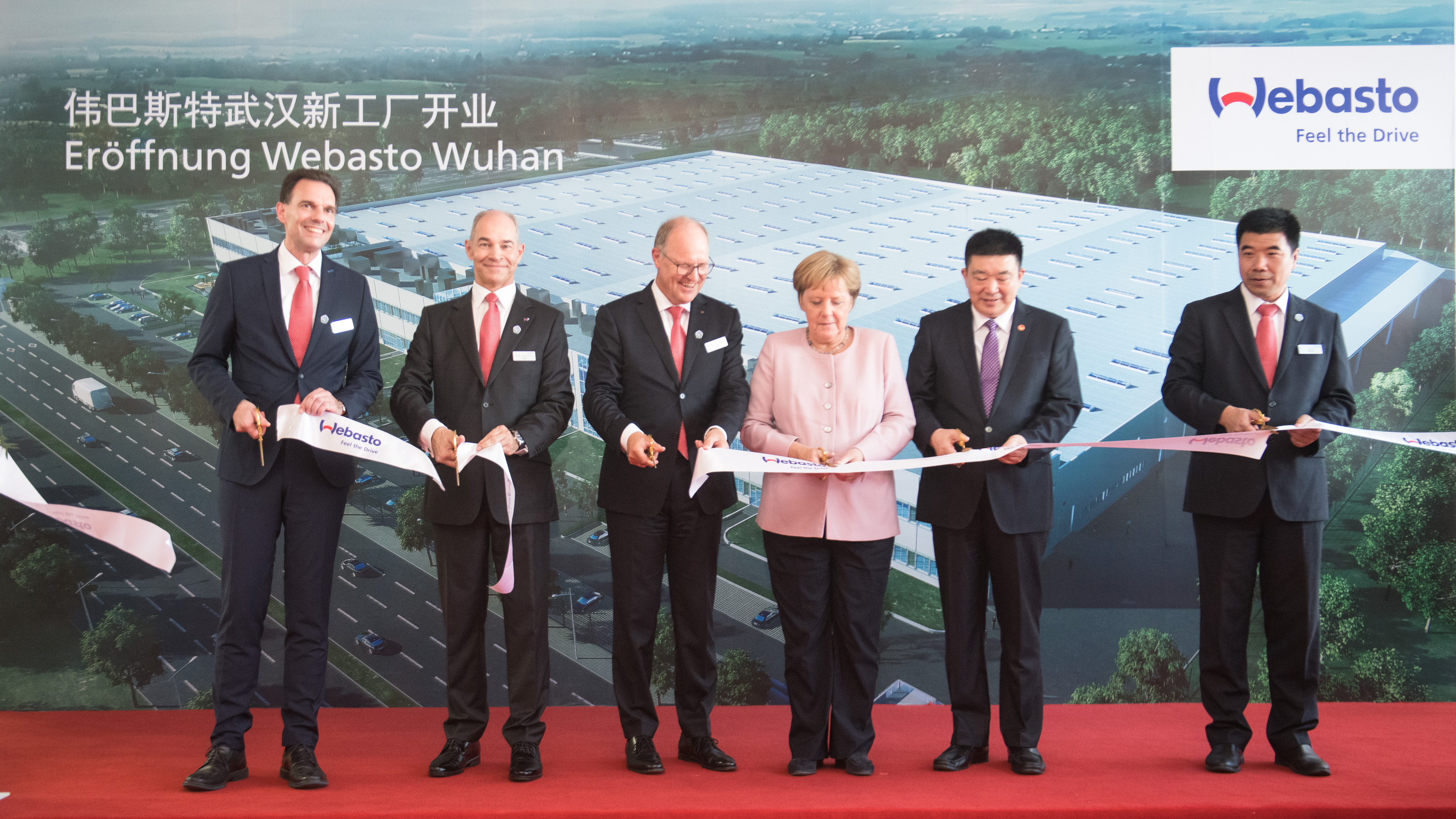 In June 2016, Merkel went to Shenyang, an old industrial city in northeast China known as the "Oriental Ruhr." (Ruhr is the heavy industrial belt that once buoyed the German economy.)

At the time, Shenyang was seeking revitalization through structural reform and Merkel was interested to discover whether Germany could offer lessons from its own experience. North Rhine-Westphalia in western Germany went through a similar transformation, from a region known as "land von Kohle und Stahl" or "Land of Coal and Steal" to a modern industrial powerhouse.

During her five-hour trip in south China's hi-tech hub of Shenzhen in May 2018, Merkel attended the opening ceremony of the German Industry and Commerce innovation hub, as well as visiting a Chinese startup and a Siemens factory. She was keen to learn about China's progress in technological innovation.

"Merkel realized that Germany was, to a certain degree, lagging behind in digital technologies and hence eyed cooperation with Shenzhen so that German companies would have more investment opportunities," said Ding Chun, professor of Center for European Studies at Fudan University. 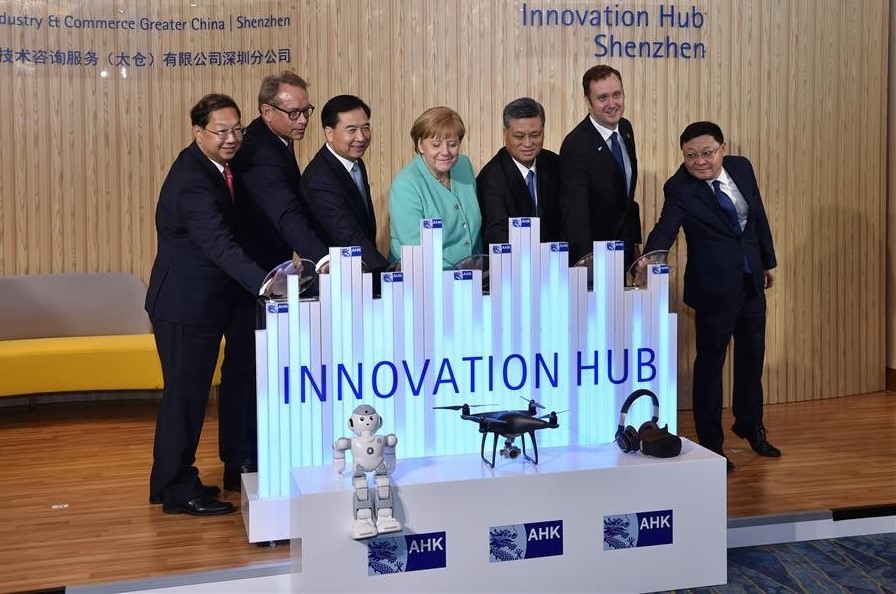 Merkel's last visit to China was in September 2019, when she went to Wuhan, capital of central China's Hubei Province. She stopped her motorcade as it passed over the Wuhan Yangtze River Bridge, which was not on her agenda. She got out of the car and asked the staff to take a picture of her. 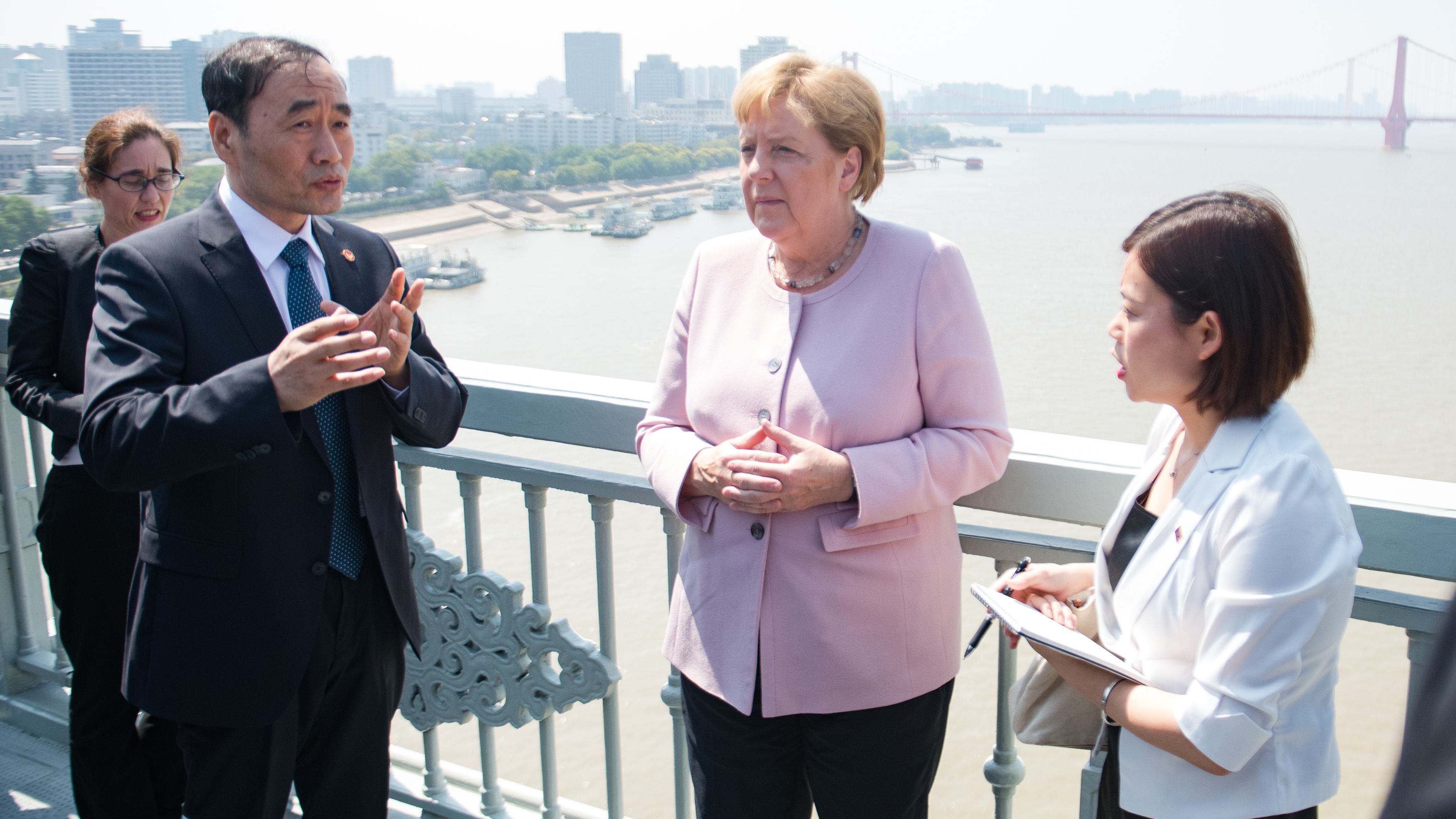 Merkel was curious about a civilization as old as China. Most importantly, she saw the potential of bilateral economic cooperation.

"The biggest difference between Merkel and other Western leaders is that she has a more pragmatic, comprehensive and objective understanding of China. Many Westerners have a stereotyped view of China, labeling it 'an authoritarian country.' But Merkel chose to seek common ground while reserving differences," said Feng Zhongping, director of the Institute of European Studies at the Chinese Academy of Social Sciences, during a phone interview with CGTN.

China has been Germany's most important trading partner for five consecutive years, since 2016, according to the Federal Statistical Office of Germany. With a trade volume of about 220 billion euros ($255 billion) in 2020, it increased 3 percent year on year despite the COVID-19 pandemic.

In December 2020, China and the European Union (EU) signed the EU-China Comprehensive Agreement on Investment (CAI), after 35 rounds of negotiations spanning seven years.

The milestone agreement has the potential not only to help to facilitate trade and investment between European and Chinese companies but also ensure fair competition, labor rights and sustainability. The deal would also open up the Chinese market to European businesses in a variety of industries such as auto, healthcare, cloud computing, finance, as well as air and maritime transport.

"Germany, a leading proponent of the agreement, held the rotating presidency of the EU in the second half of 2020. Merkel is experienced and respected, exerting her clout upon other EU countries. This is her legacy for China-EU relations," Feng stressed.

However, closer economic relations between China and the EU raised concerns from the United States. In March 2021, the EU joined the U.S., the UK and Canada in imposing sanctions on Chinese officials involved in alleged human rights violations in China's Xinjiang Uygur Autonomous Region. China responded with counter-sanctions on EU officials, think tanks and scholars.

In the following months, Merkel reiterated her support for the agreement's ratification by the European Parliament. "I hope that the agreement will be approved and enter into force smoothly as soon as possible," she told Chinese President Xi Jinping over the phone last month.

The COVID-19 pandemic makes in-person visits difficult, but not dialogue.

On April 28, 2021, Chinese Premier Li Keqiang and Merkel co-hosted the sixth round of China-Germany intergovernmental consultation via video conference. Both sides agreed the mechanism had served as a "super engine" for bilateral cooperation during the past decade. 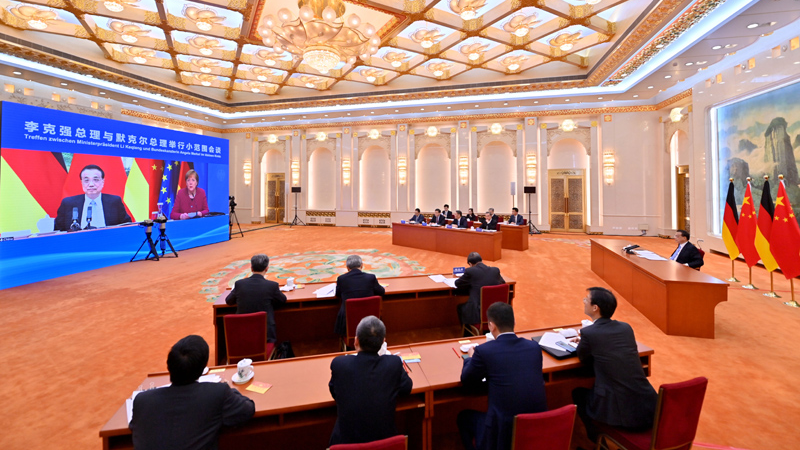 The sixth round of China-Germany inter-governmental consultation, April 28, 2021. /Xinhua

The sixth round of China-Germany inter-governmental consultation, April 28, 2021. /Xinhua

"Merkel's most notable contribution to China-Germany relations was the proposal of establishing an intergovernmental consultation mechanism, during which ministers from both sides launched efficient and effective talks. It is the first of its kind between China and other countries," Feng noted. 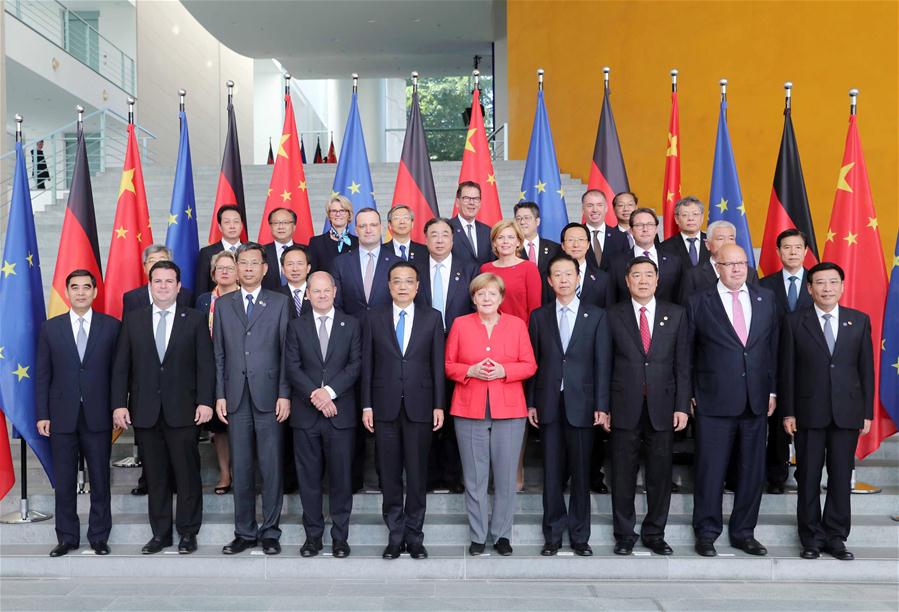 Back in 2012, one product became the center of the biggest China-EU trade dispute: the solar panel.

In September 2012, the European Commission launched an investigation into potential dumping of Chinese solar panels, following a complaint from EU ProSun, the alliance of European solar photovoltaic manufacturers.

Months later in June 2013, the Commission decided to raise tariffs on panels from China from 11.8 percent to 47.6 percent if the two sides failed to reach a compromise by August.

During the process, Merkel insisted on dialogue to prevent the trade dispute from escalating. "Germany will do what it can so that there are no permanent import duties and we'll try to clear things up as quickly as possible," she said.

After six weeks of talks, the EU and China reached an understanding, setting a minimum price for China's exported panels, securing 60 percent of the EU market for China's manufacturers. The deal expired five years later in September 2018, and became a paradigm of settling trade frictions through consultation.

A steady hand on the rudder

Known as a crisis manager in Western media, Merkel helped navigate the EU through the financial crisis of 2008, the migrant crisis in 2015, as well as the Brexit and the COVID-19 pandemic in 2020.

"A leader like Merkel is rare in Germany. Her successor could hardly surpass her influence on Sino-German relations, given domestic opposition and pressure from the EU and the U.S.," Ding told CGTN.

In her farewell visit to Washington in July 2021, Merkel made it clear that Germany would not join forces against China.

"They are close allies, but their interests are not 100 percent the same. She has to look after Europe's interests and engages in close economic ties with China," said Feng.

Merkel is fully aware that China's development and prosperity is in Germany's interest, and both Europe and China need to work with each other in making decisions that affect the future of the world.

"Whether it's climate change, whether it's issues related to the World Trade Organization, whether it's other international conundrums, we're not going to be able to solve them without China or by confronting China," Merkel said during a video conference on transatlantic relations this May.

As for the climate pledge, both China and Germany have made commitments to the world.

President Xi announced China's goal to peak carbon emissions by 2030 and achieve carbon neutrality by 2060 last September. He also announced at the United Nations General Assembly a week ago that the country "will not build new coal-fired power projects abroad."

Germany has set a target to phase out coal-fired power generation by 2038 at the latest, according to the Federal Ministry for the Environment, Nature Conservation and Nuclear Safety.

Now Germany's new parliament has been elected, but a new government and chancellor have not been decided. "Olaf Scholz is the more likely to be Merkel's successor, who will probably continue her China policy," Feng predicted.