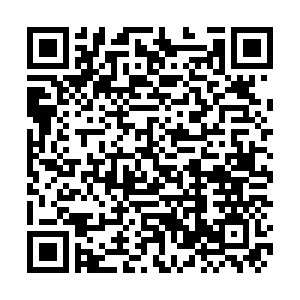 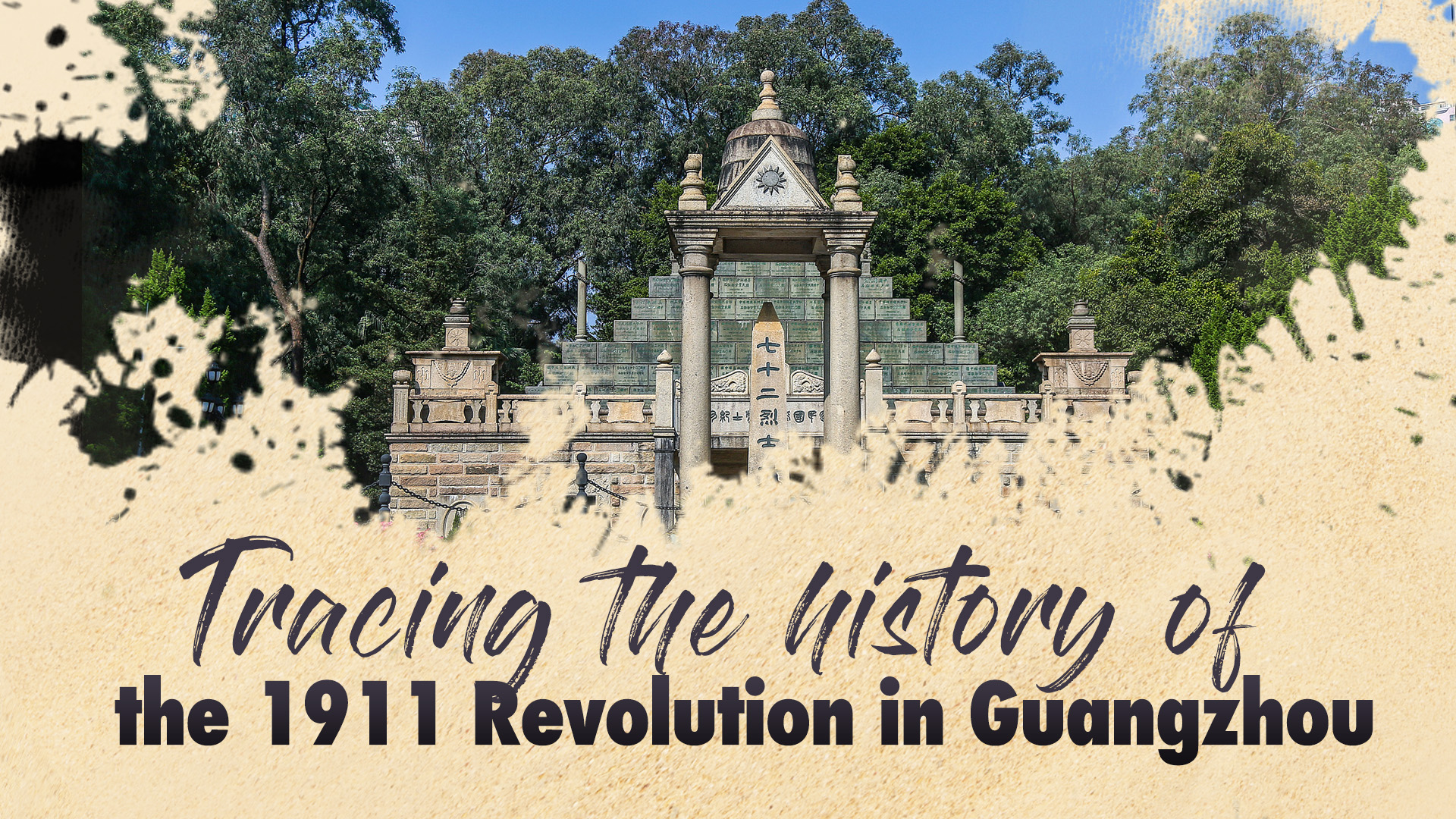 Editor's Note: This year marks the 110th anniversary of the 1911 Revolution, or the Xinhai Revolution, which overthrew the Qing Dynasty (1644-1911) and put an end to the country's over 2,000-year-old monarchy. The revolution is of great historic significance, for it led to the establishment of the Republic of China (1912-1949) and the following social changes in the country. Nowadays, some of the historical sites have been preserved in the country to remember this important chapter in Chinese history.

The city of Guangzhou, capital of south China's Guangdong Province, is another crucial battlefield of the 1911 Revolution besides Wuhan.

There had been multiple attempts of rebellions ahead of the Wuchang Uprising. The renowned Huanghuagang Uprising, which took place in Guangzhou on April 27, 1911, was one of them. It was led by the Tongmenghui (Chinese Revolutionary League), an organization founded by the revolutionary pioneer Sun Yat-sen (1866-1925) in the late Qing Dynasty through the unification of several Chinese revolutionary groups that played a pivotal role in the 1911 Revolution.

Though it failed, the revolt left a huge impact on the course of history by waking up the nation and triggering later uprisings. The fallen heroes have been revered as "Huanghuagang 72 Martyrs."

Since the founding of the People's Republic of China in 1949, the city has launched a series of protection and management works to preserve the historical sites related to this period and built memorials to honor those who sacrificed their lives for the country. 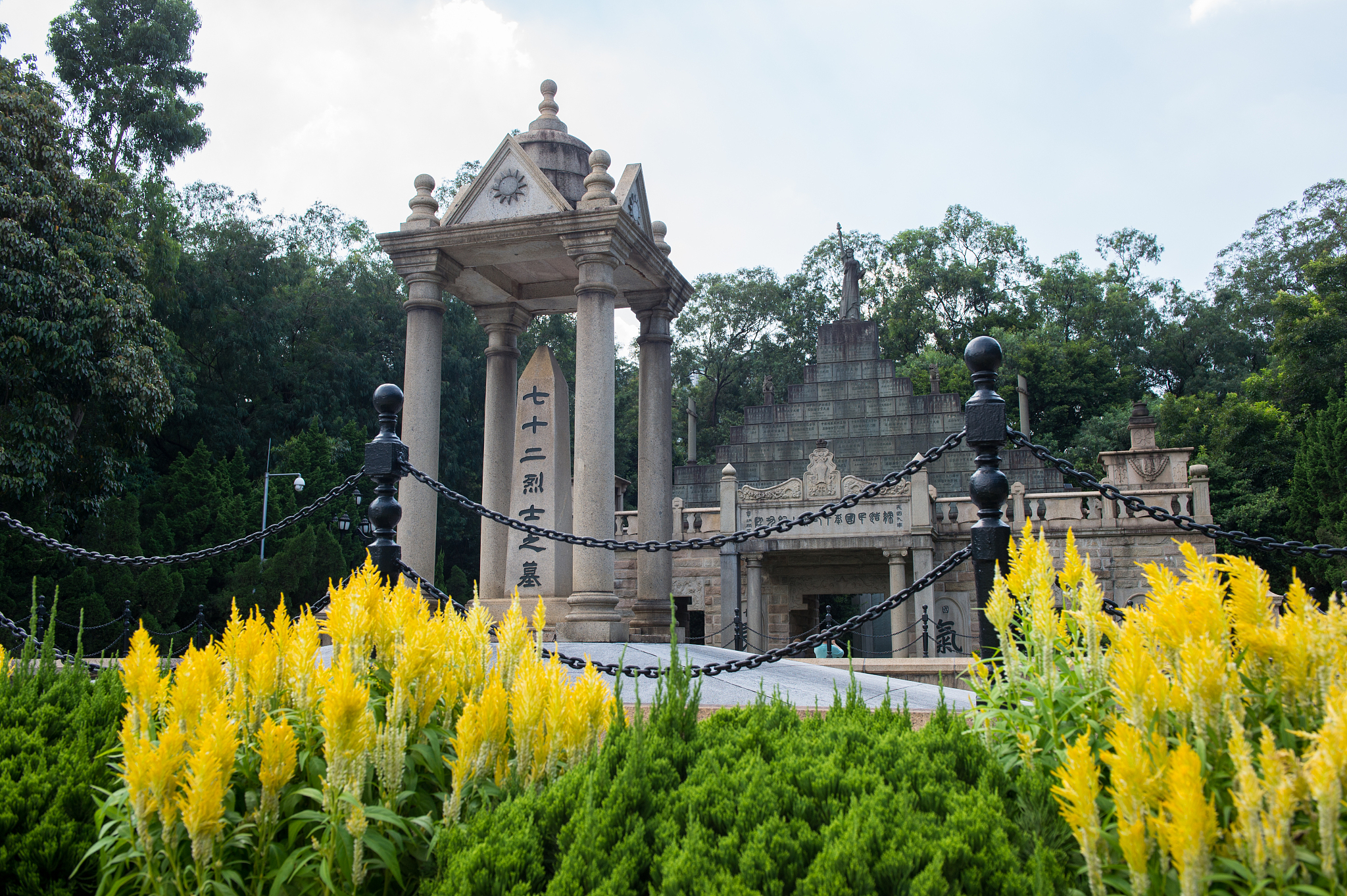 The Huanghuagang Cemetery of the 72 Martyrs in Guangzhou, south China's Guangdong Province. /CFP

The Huanghuagang Cemetery of the 72 Martyrs in Guangzhou, south China's Guangdong Province. /CFP

There is a special road in the city dedicated to honoring the country's fallen heroes. Named "Xianlie" (martyr), the 4-kilometer-long road is lined with over 20 memorial gardens of martyrs who perished at the historic revolutions. The Huanghuagang Cemetery of the 72 Martyrs sits in the middle.

On the day of the uprising, Chinese revolutionary leader Huang Xing (1874-1916) led over 120 people to attack the viceroy's offices. Huang, one of the founders of the Republic of China and a close friend to Sun, sustained wounds during the uprising that cost him two fingers and gained him the nickname "Eight-Finger General."

After a tough battle that lasted a day and night, the attempted uprising ended in failure. Over 100 revolutionaries, including Lin Juemin, Yu Peilun and Fang Shengdong, were martyred.

Three days before the uprising, Lin wrote a farewell letter to his wife, which has been held as an important work of Chinese writing during the early 20th century. Today, his former residence, located in Sanfang Qixiang (Three Lanes and Seven Alleys) in Fuzhou City, southeast China's Fujian Province, is currently a protected site. 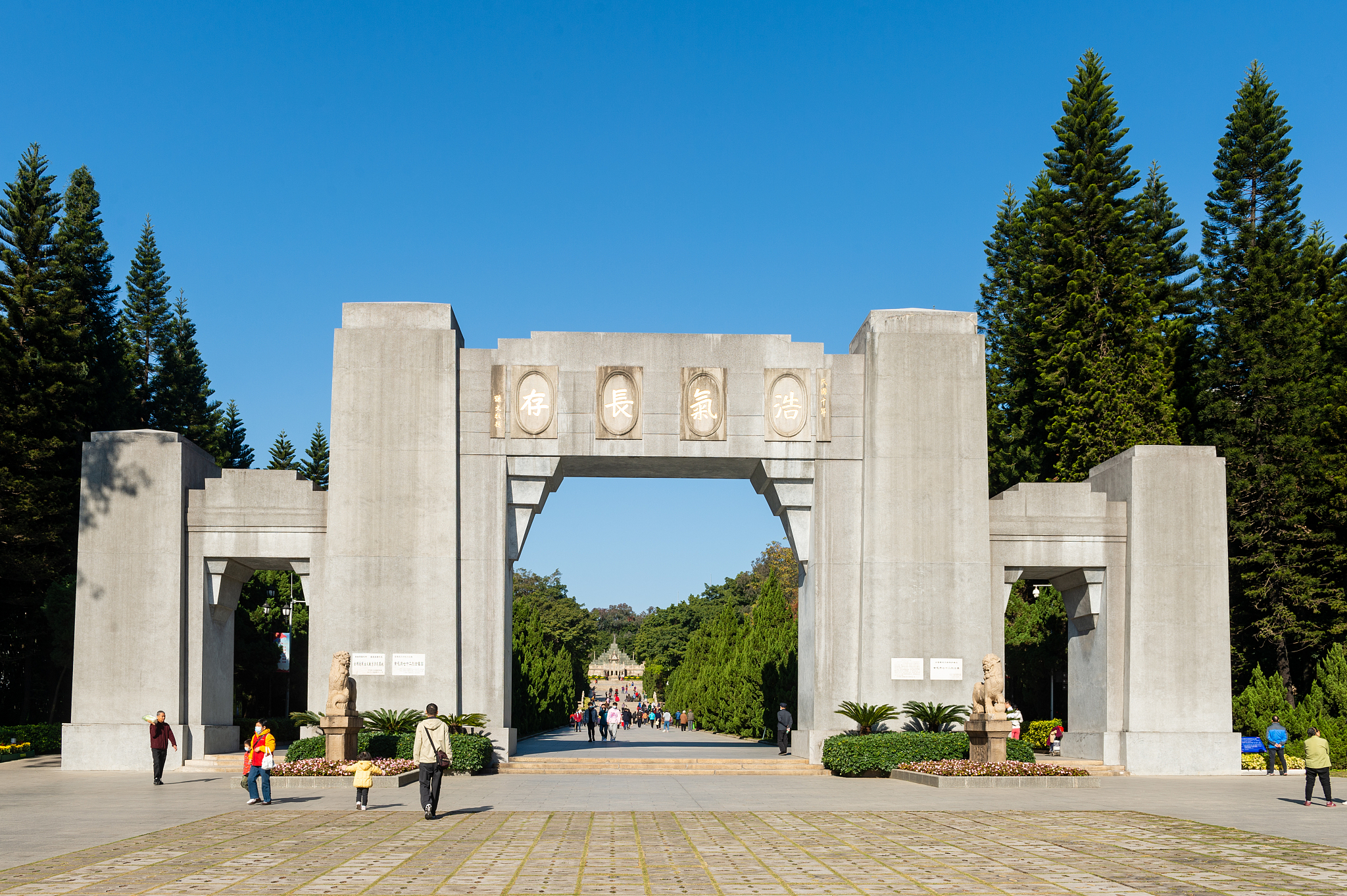 When the uprising ended, the corpses of the revolutionaries were placed in front of the Guangdong consultative bureau on public display. Pan Dawei, a Tongmenghui member, ventured around and collected the remains. A total of 72 bodies were buried at Huanghuagang, hence the name of the cemetery.

In 1912, the Guangzhou military government built the mausoleum at the original location. After Pan's death, he was also buried here. The cemetery was expanded several times in the following years with 86 martyrs verified.

A monument named Jigong Fang (Pavilion of Honors) was built at the site in 1921. Seventy-two stones were stacked in the shape of a mountain, symbolizing the 72 martyrs. The Statue of Liberty stands on the top of the pile, expressing the revolutionary ideas of striving to build a free and equal country. 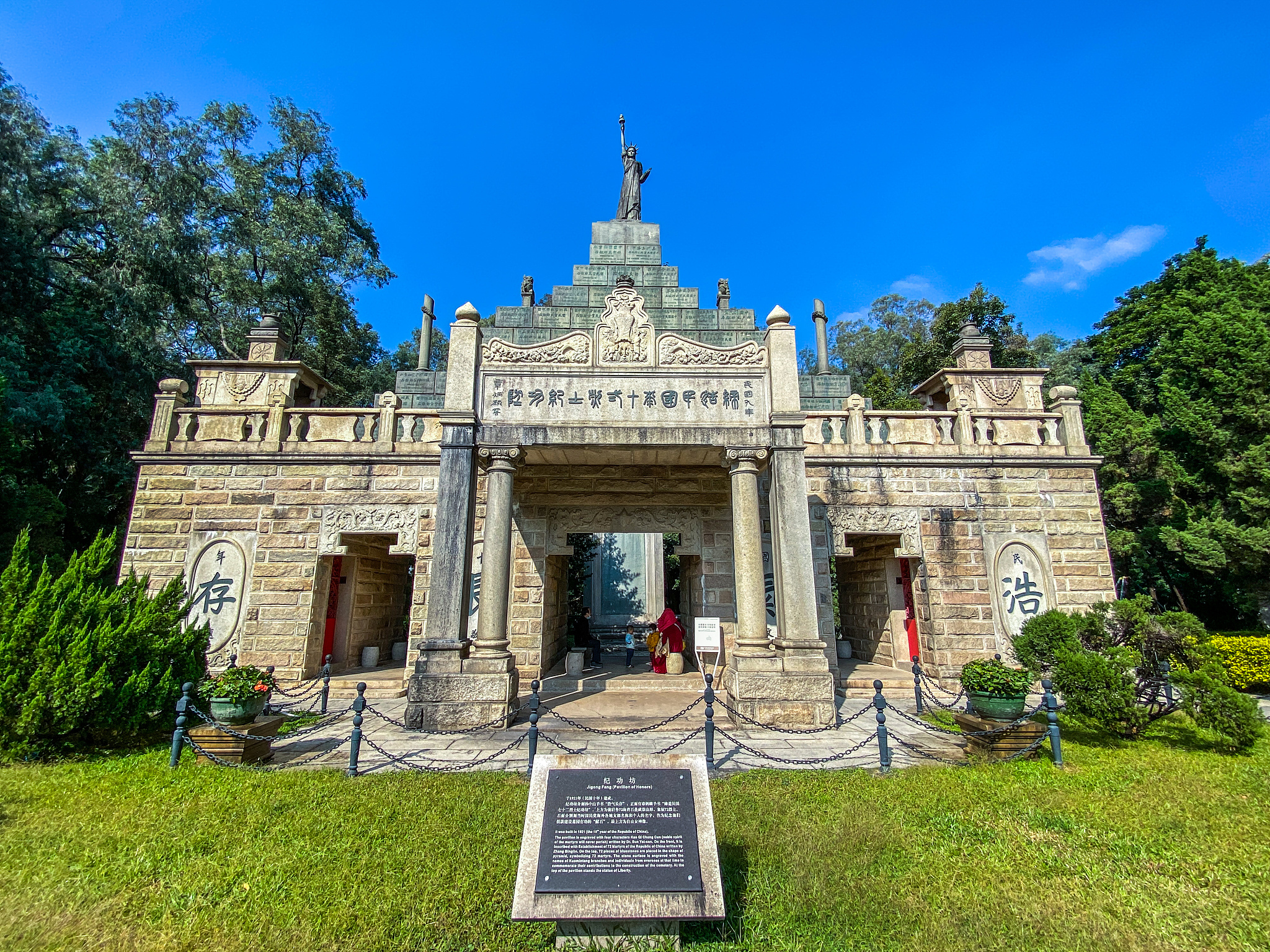 Jigong Fang at Huanghuagang Cemetery of the 72 Martyrs in Guangzhou. /CFP

Jigong Fang at Huanghuagang Cemetery of the 72 Martyrs in Guangzhou. /CFP

At the front gate, visitors are welcomed by a giant archway with three arches. The gate is engraved with four Chinese characters, "Hao Qi Chang Cun," that were inscribed by Sun, meaning that a noble spirit will never perish.

The site has been protected as a national key cultural relic since 1961, and was renovated twice in the 1980s. It is seen as a testimonial to the bravery of the revolutionaries who served the country. 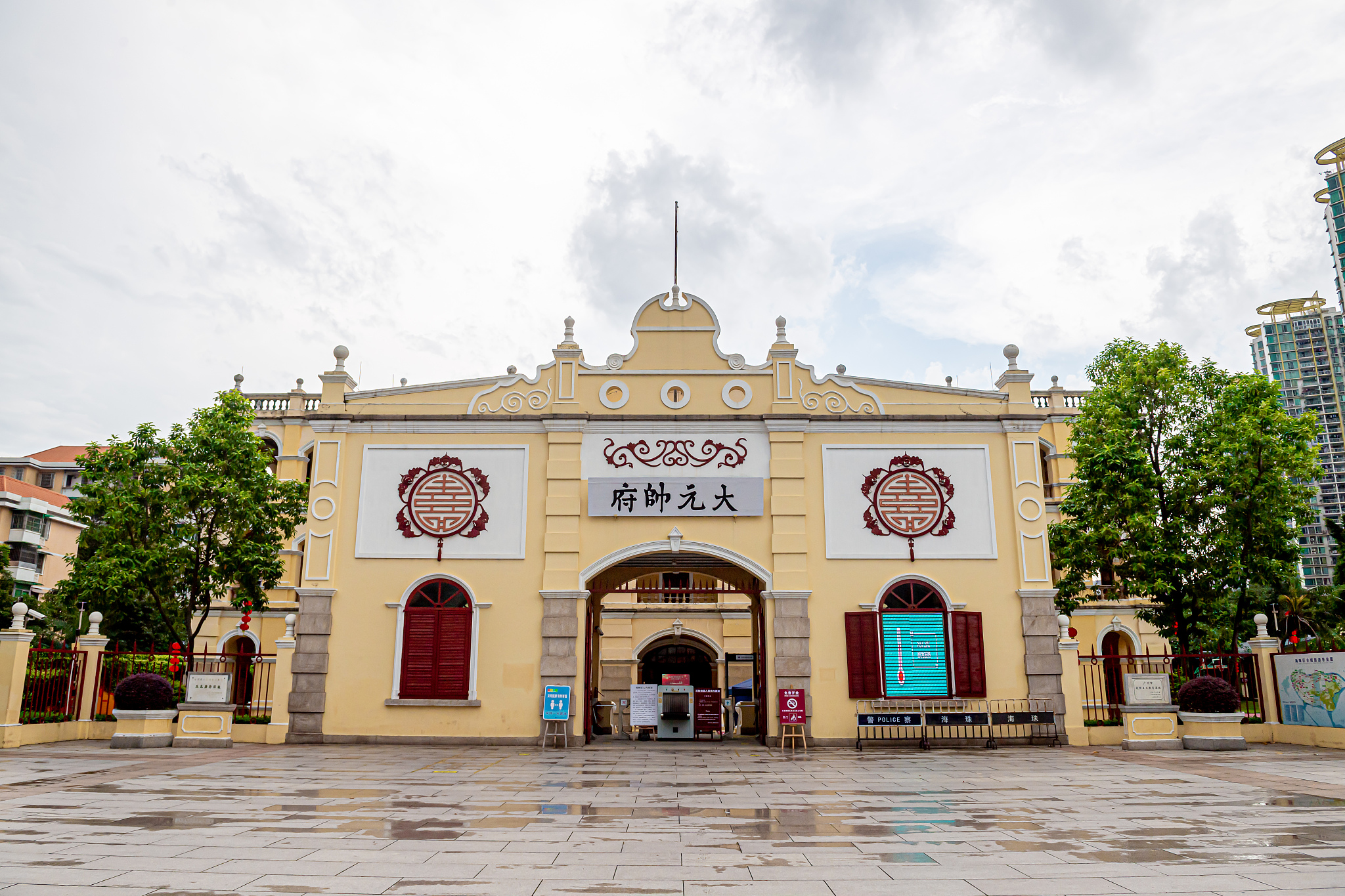 The former site of Generalissimo Sun Yat-sen's Mansion is located on the southern bank of the Pearl River. Today, it has been transformed into a memorial museum, attracting thousands of visitors from home and abroad.

The site was originally a cement factory set up in 1906 during the Qing Dynasty, which was later designated as the Generalissimo Mansion.

Sun established the revolutionary government three times in Guangzhou between 1917 and 1925, and two of them were at this mansion. Important decisions were made here, including the initiation of the Constitutional Protection Movement in 1917 – a series of political movements to resist the Beiyang government led by Yuan Shikai (1859-1916), a former general of the Qing Dynasty. The Beiyang government was the first internationally recognized Chinese government after the decline of the Qing Dynasty. After Yuan's death, various warlords started power struggles and the government was eventually overthrown in 1928. 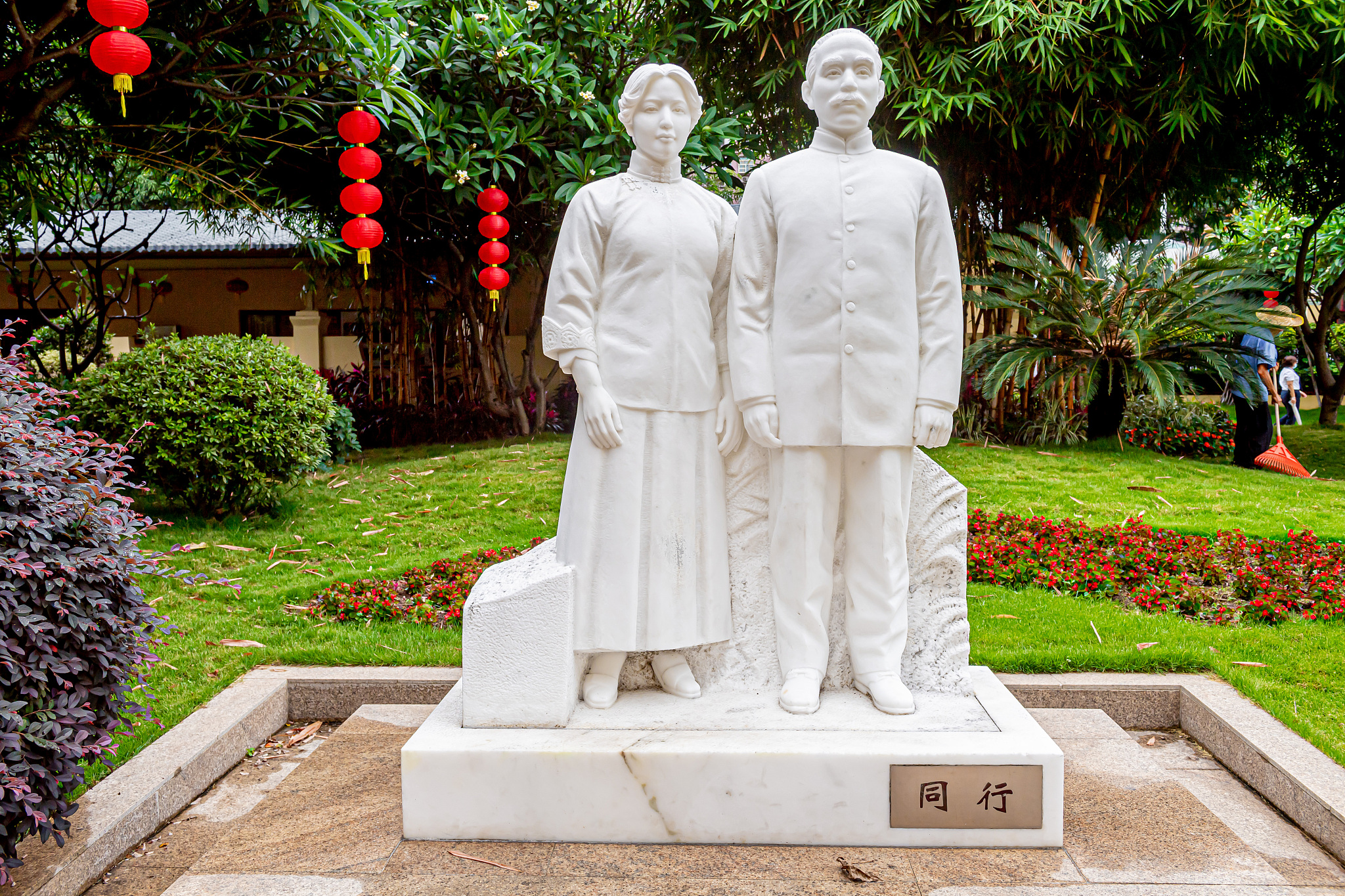 A sculpture, created based on a photo of Sun Yat-sen (R) and his wife Soong Ching-ling taken in the garden of the mansion in 1918, is set up at the Memorial Museum of Generalissimo Sun Yat-sen's Mansion in Guangzhou. /CFP

A sculpture, created based on a photo of Sun Yat-sen (R) and his wife Soong Ching-ling taken in the garden of the mansion in 1918, is set up at the Memorial Museum of Generalissimo Sun Yat-sen's Mansion in Guangzhou. /CFP

The complex comprises two Western-style buildings, displaying the history of the revolutionary era and Sun's living quarters, offering insights to the life and great deeds of the forerunner of China's democratic revolution.