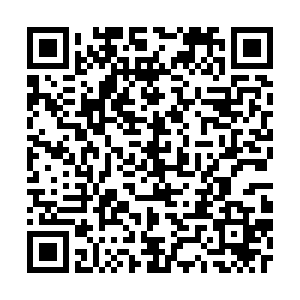 After losing his job, Victor became increasingly irritable and aggressive. Within less than a year, he began drinking, took Xanax and even threatened to commit suicide. Eventually, he got into a street fight and injured his head. Realizing the severity of his mental illness, his mother reached out to NYC Well – an organization which offers free mental health support.

For the next few months, he gradually showed improvement in his mental condition. Feeling more hopeful, he attended Alcoholics Anonymous meetings to control his drinking. This is just one of the client stories from the Mayor's Office of Community Mental Health. During the pandemic, more people than ever have resorted to psychological help.

Mental health problems, including alcohol abuse, are among the 10 leading causes of disability. Millions of people worldwide have mental health conditions, and an estimated 1 in 4 people will experience a mental health crisis in their lifetime, according to the United Nations.

The COVID-19 pandemic has made the situation worse. Prolonged quarantine and the fear of infection have caused widespread stress, anger and frustration. Meanwhile, symptoms of anxiety and depression have risen from 11 percent to 42 percent in 2020 from the previous year, data from the U.S. Census Bureau shows. Tracy Park sits in the park where she was shouted at with her daughter, as the coronavirus disease (COVID-19) pandemic continues in the U.S., April 27, 2021. /Reuters

Tracy Park sits in the park where she was shouted at with her daughter, as the coronavirus disease (COVID-19) pandemic continues in the U.S., April 27, 2021. /Reuters

Unlike Victor, who has the opportunity to seek help from mental health professionals, 17-year-old Asmita Danci from India tried to talk about her feelings of depression with her closest cousin but only got a laugh. "I'm suffering from something that is a joke to them, and at that point in time, I lost all my confidence," she said.

Danci's experience is hardly unique in developing countries, where mental health problems are often buried. Among the 50 million Indian children affected by mental health issues, 80 to 90 percent failed to seek help, according to the Indian Journal of Psychiatry.

Even in developed countries, income-related mental health inequality was exacerbated during the pandemic. In New York City, low-income neighborhoods were the hardest-hit areas by the coronavirus. But low-income workers still had to go out for work while those with higher incomes had more freedom to choose their workplace.

"The pandemic exposed the structural disadvantage for the low-income population," said Jing Jun, director of the Research Center for Public Health at Tsinghua University. "Unlike professors or senior managers, those with lower income and those who are not able to work remotely at home are more likely to have mental health problems." 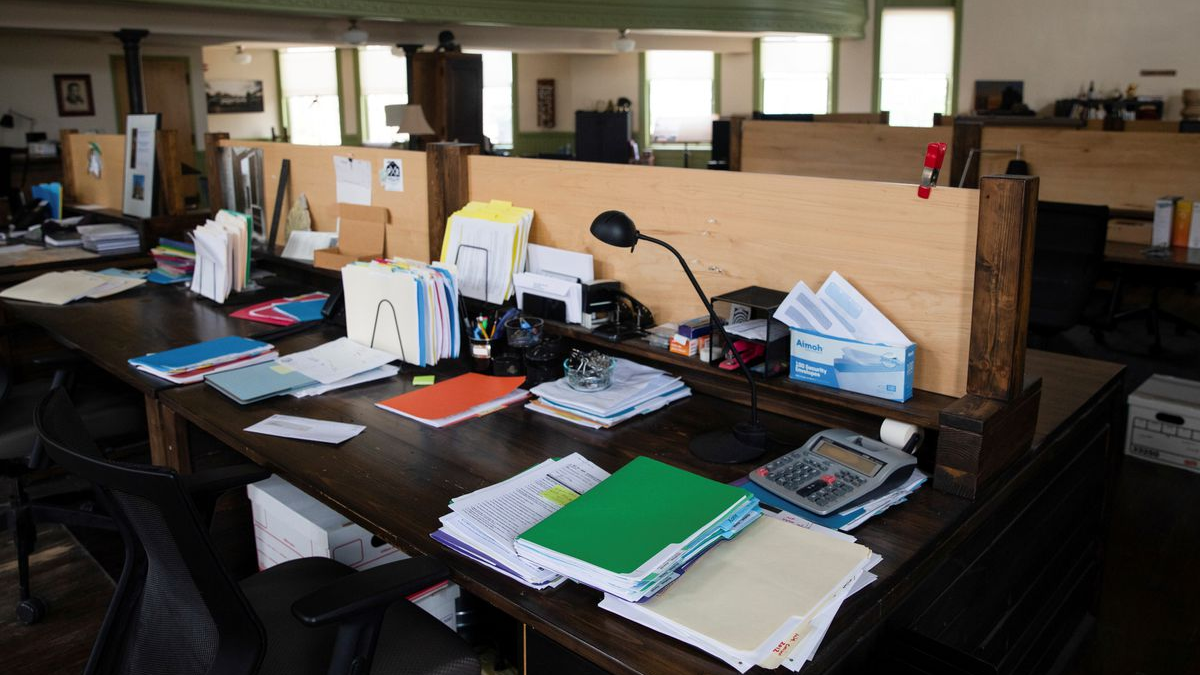 Desks sit empty inside the Grand Army of the Republic Building as employees continue to work remotely due to the coronavirus disease (COVID-19) pandemic, U.S., June 8, 2021. /Reuters

Desks sit empty inside the Grand Army of the Republic Building as employees continue to work remotely due to the coronavirus disease (COVID-19) pandemic, U.S., June 8, 2021. /Reuters

The mental health effects of the pandemic were not the same for everyone. Jing mentioned international students as another deeply affected group. During the pandemic, limited travel meant they could only continue their education online. "I know at least two students who are not able to go back to the U.S., they get up at midnight to take online courses due to the time zone differences. They looked very tired all the time," said Jing.

International students are more likely to develop mental illnesses compared with their foreign classmates, as research suggests that sleep deprivation is linked to depression. Apart from income disparity and travel restrictions, stress and negative emotions resulting from discrimination also have a detrimental psychological impact.

Since the outbreak of COVID-19, over half of Asian Americans (58 percent) and 45 percent of Black Americans have reported increased racist views expressed toward them, according to Pew Research. Minority groups are often targeted because of their perceived link to the origin of the disease. 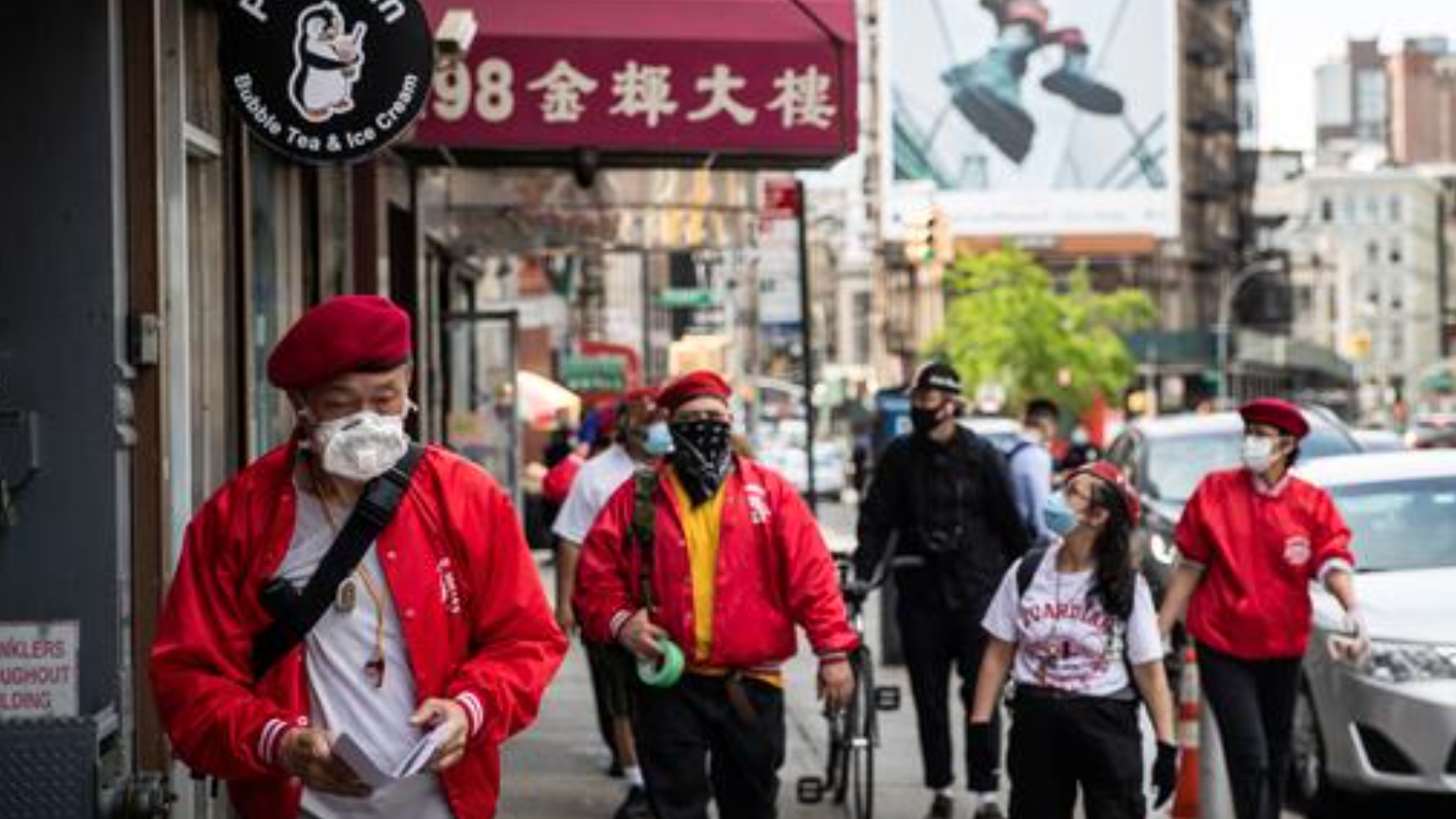 Wally Ng, a member of the Guardian Angels, patrols with other members in Chinatown during the outbreak of the coronavirus disease (COVID-19) in New York City, U.S., May 16, 2020. /Reuters

Wally Ng, a member of the Guardian Angels, patrols with other members in Chinatown during the outbreak of the coronavirus disease (COVID-19) in New York City, U.S., May 16, 2020. /Reuters

Jing, also a professor at Tsinghua University's Department of Sociology, pointed out the lack of tracking of people's mental health conditions during the pandemic, which makes mental health support based on data less targeted.

Mental health support is among the most disrupted essential health services during the pandemic, according to the World Health Organization, which has been supporting countries to strengthen health information and collecting data on mental health. Some countries and social groups are also on the move. The government of New South Wales, Australia, invested $1.5 million to expand digital mental health support, while TELL Japan, a Tokyo-based nonprofit group, is providing mental counseling to Japan's international community, which it has done for nearly 50 years.

In January 2020, hundreds of 24-hour mental health support hotlines became active in China to help people who were fretting over the pandemic. The hotlines were part of the country's "first level response" to meet people's psychological needs. They were first launched following the 2008 Wenchuan earthquake, which left more than 80,000 people dead or missing. 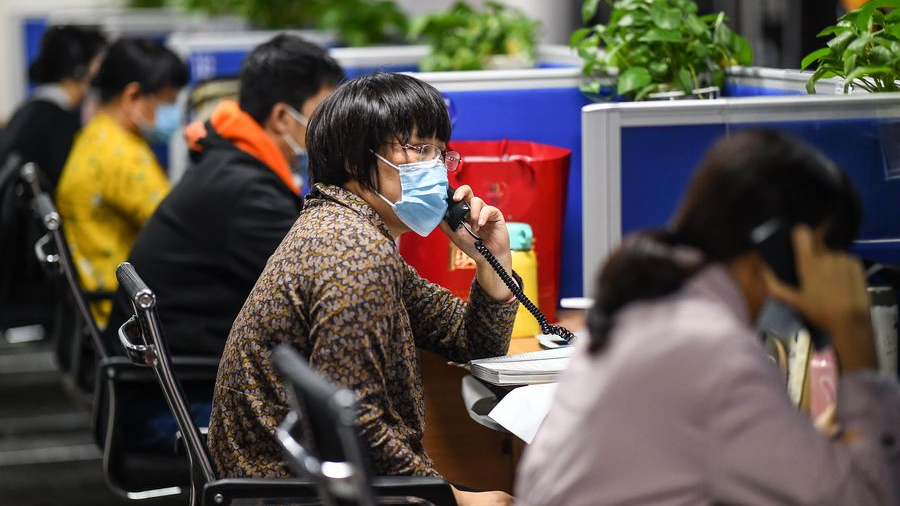 "The main cause of the difference lies in the imbalance of mental health resources, including psychiatrists who treat critically ill patients, as well as mental health workers who offer psychological counseling services and promote mental health knowledge," Chen Zhiyan, a professor at the Institute of Psychology at CAS and deputy editor-in-chief of the blue book, told CGTN.

Chen added that there are over 1 million licensed psychological counselors in China, but less than 3 percent of them are engaged in the industry. Expertise is required to provide mental health services.

From 2002 to 2017, individuals could obtain a license to counsel by taking the National Exam for Psychological Counselors in China. The exam was canceled in 2017.

"Part of the reason was that the theoretical training before the exam was not enough in future practice for people without any academic background in mental health. The license holders have little practical experience and lack supervision," explained Du Bingli, PhD in Psychiatry and Mental Health at West China Hospital of Sichuan University.

"The psychological problems are more prevalent in low-income, low-education, jobless and unemployed people worldwide. Struggling with a lack of money, time and knowledge, they need mental health support most and are least likely to get access," said Chen. "Only by establishing an active psychological support system at the national level can we help them better." 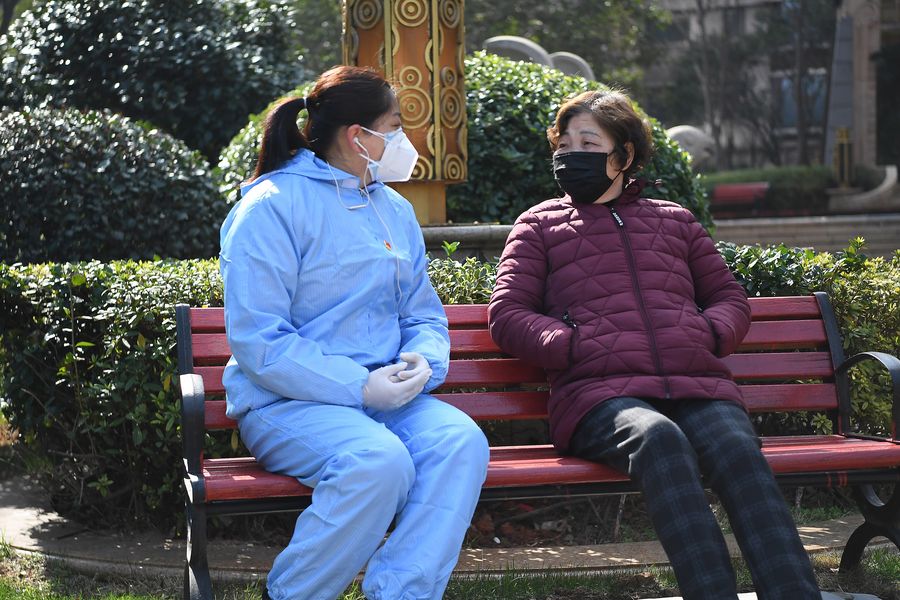 A member of the Communist Party of China provides psychological counseling for a resident at a community in Xihu District of Nanchang, east China's Jiangxi Province, January 31, 2020. /Xinhua

A member of the Communist Party of China provides psychological counseling for a resident at a community in Xihu District of Nanchang, east China's Jiangxi Province, January 31, 2020. /Xinhua

In December 2018, China issued a plan to explore a suitable social and psychological services model through a three-year pilot scheme.

Cities or areas that applied to join the pilot scheme have completed their tasks within the previous two years. By the end of the final year in 2021, a full-fledged network of psychological services will be formed in the pilot areas. At least 80 percent of villages and communities in pilot areas will have their own psychological counseling rooms or social work centers.

"Besides training mental health workers, we need to take the initiative. Many Chinese psychology counselors thought they could adopt the 'passive approach' like their Western counterparts, waiting for patients in their clinics," noted Chen. "In China, we need to reach out and help people with psychological risks or problems."

Chen also suggested mental health workers acquire cross-disciplinary knowledge to improve service. For instance, those in the judicial system can offer better help if they have legal knowledge.

Technology is speeding up the process. Some professional institutions in China have been funded to develop AI and internet-based counseling. "In the past, a patient in Lanzhou must travel to Beijing to have a face-to-face counseling session with a psychologist, but now they meet online," said Chen. "It saves time and money and is friendly to people seeking help in remote areas."