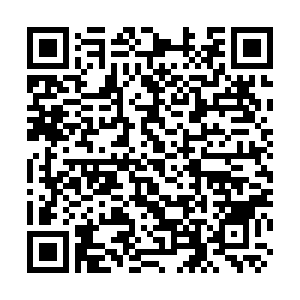 An infrared camera has captured rare footage of two black bears playing with each other at a nature reserve in Zhangjiajie City of central China's Hunan Province.

A staff member at Badagong Mountain National Nature Reserve surprisingly found the footage of the second-class protected animal in China filmed on September 16 when he was checking the videos.

The footage showed that the two strong, adorable bears of different sizes had "V-shaped" white fur on their chests. The two creatures tussled with each other and used every move they could, punching, biting and slapping, all recorded by the camera.

"According to the footage, the big black bear is five years old and has a weight of around 100 kg and the smaller one is three years old and weighs about 65 kg," said Xiang Jianjun, manager of the infrared camera monitoring project at Badagong Mountain National Nature Reserve.

The black bear is a wild animal living in the forest and generally prefers secluded forests with abundant food sources. It is the first time that the reserve has captured the footage of black bears in the daytime as they normally wander around alone at night.

"According to incomplete statistics, there are about 320 black bears in the reserve, with a wide distribution area and a large population. Since the black bear is one of the top-protected species of the reserve, we have taken various measures to protect its habitat and the security of forest resources and maintain ecological balance. It is a result of our management efforts of the reserve," said Xiang.

Badagong Mountain National Nature Reserve covers an area of 20,000 hectares, which is one of the natural forests with a completely protected and large sub-tropical area in China, also known as the "natural museum" and "species gene center." There are 237 kinds of terrestrial vertebrates in the reserve, among which 40 species are under the first or second level state protection. Thanks to the decades of protection efforts, more animal species are being found there as the environment improves.