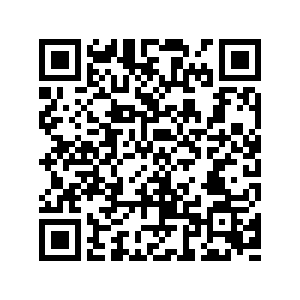 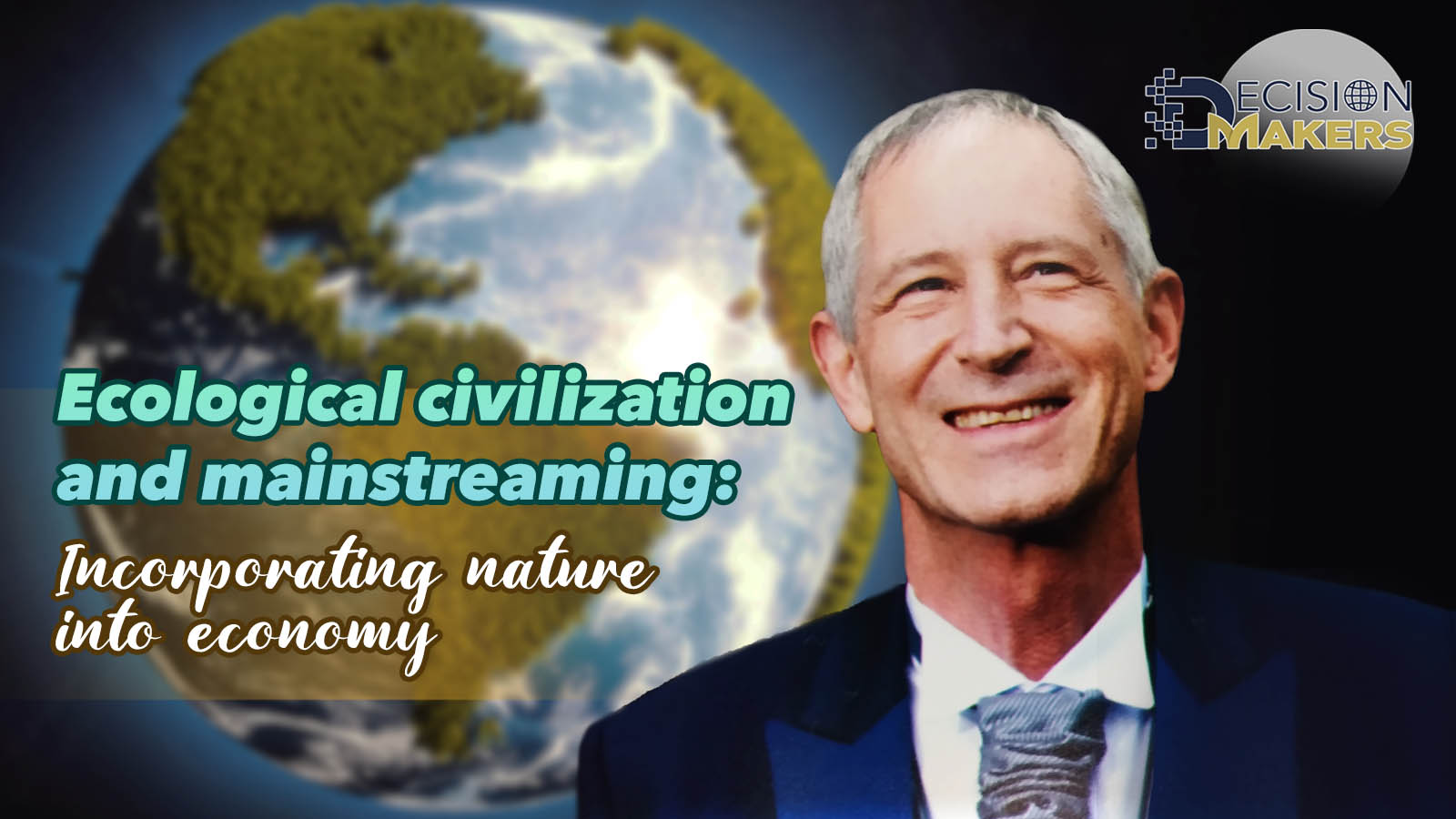 Editor's note: Decision Makers is a global platform for decision makers to share their insights on events shaping today's world. Oliver Hillel is a program officer at the Secretariat of the Convention on Biological Diversity, responsible for the engagement of states, regions and cities in the work of the convention, and for the mainstreaming of biodiversity into economic sectors and development. The article reflects the author's opinions and not necessarily the views of CGTN.

Recent scientific studies of global significance, such as the Dasgupta Review and the Intergovernmental Science-Policy Platform on Biodiversity and Ecosystem Services (IPBES) assessments, reveal that our planet is undergoing critical changes that threaten our well-being and our economies over the next years. The climate emergency, the pollution of our waters and sea, and the steep loss of nature are all over the headlines. The last one is especially critical.

From the second half of the 1900, in my lifetime, humanity has lost around 70 percent of the plants, animals and fungi we started with. This includes the variety of plants and animals we depend on for food, and it means numbers of species as well as numbers of individuals per species, the biomass.

That is a red flag for all, as nature is quite literally in our body – we are, in many ways, ecosystems ourselves, and our health depends on the cycles of nature. We need land and marine parks around us for recreation and immunity; our economies depend on nature thousands of kilometers away, and on the protected rivers, forests and mountains of neighboring countries. The food and water we need and the air that we breathe depend fundamentally on healthy and diverse ecosystems. On the other side of the spectrum, some health aspects of the COVID-19 crisis have been linked to environmental degradation – a realization that led to the UN One Health approach.

The scientific studies go further. They prove that the ultimate causes of these challenges may be linked less to the inability of our governments to care for the environment and more to the way we collectively buy services and products, invest and spend resources, as well as the way we borrow or earn our money.

As a species, we spend many times more money over-using nature through the way we produce, "borrowing" from the capital accounts of nature's free services, than protecting it – like 20 or 30 times more, depending on country and consumption levels. For our habits to help us become stewards of nature, we need to change and redesign our economies and finances, our modes of production and consumption. This understanding is at the core of the concept of mainstreaming biodiversity into economic sectors, a reference for the UN's flagship agreement on nature, the Convention on Biological Diversity (CBD), signed on by 196 parties, including China.

As part of its growing role in the international agenda, China has been elected to host and preside the 15th meeting of the highest decision-making body of the CBD, the Conference of the Parties or COP15, launched on October 11, 2021, and with a second in-person component announced for April and May 2022 in the city of Kunming, Yunnan Province.

In the context of the convention, national governments propose mainstreaming as "integrating, as far as possible and appropriate, the conservation and sustainable use of biological diversity into relevant sectoral or cross-sectoral plans, programs and policies."

Very concretely, this means that the mandates and work of important ministries such as those responsible for planning, economics, trade, finance, regional development, agriculture, energy and infrastructure, among others, should consider the implications, impacts and dependencies of their decisions on nature, in consultation with the ministries for environment and sustainable development.

Mainstreaming also implicates different levels of governments according to the scope of their responsibilities: national, subnational at land and seascape level, and local. Work is different at urban, rural and inland or coastal levels. 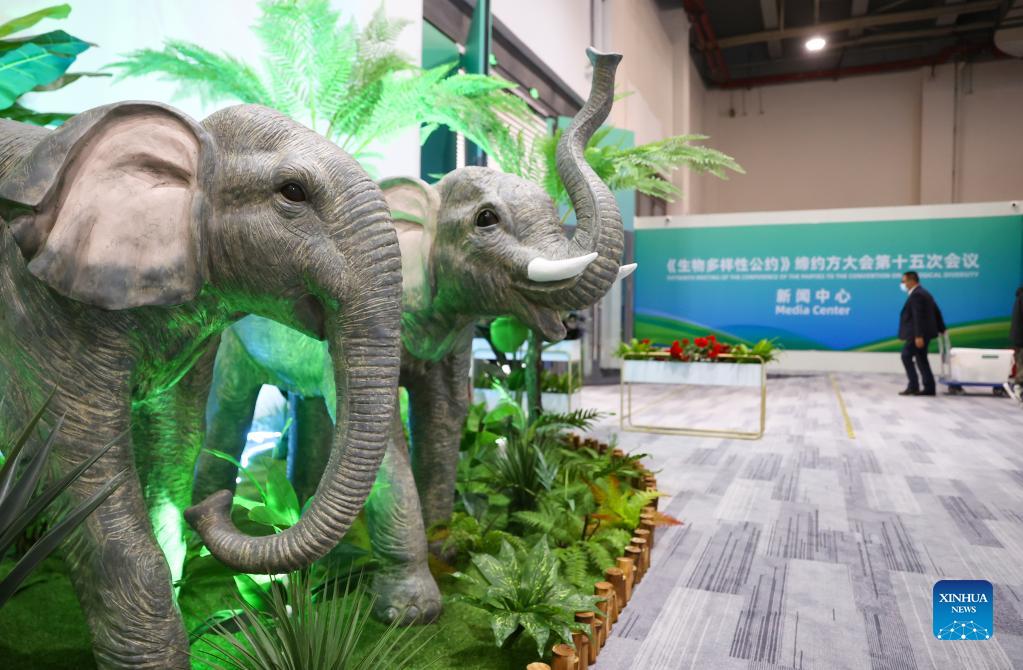 A view of the media center of the 15th meeting of the Conference of the Parties to the Convention on Biological Diversity, known as COP15, in Kunming, southwest China's Yunnan Province, October 12, 2021. /Xinhua

A view of the media center of the 15th meeting of the Conference of the Parties to the Convention on Biological Diversity, known as COP15, in Kunming, southwest China's Yunnan Province, October 12, 2021. /Xinhua

Finally, mainstreaming also requires the involvement and cooperation of all players, so that their interests are considered, synergies are explored and contributions supported. Governments at all levels are legislators, regulators and facilitators; businesses and finance need to change their codes and standards; academia and experts are needed to assess, measure, report, provide solutions and build capacity. Affected residents and local communities can help demand change where needed, point to solutions, and help monitor and report. Women, youth, indigenous peoples and local communities bring their knowledge and resources, and help co-manage land, waters and sea. NGOs are needed to assess and inform on impacts and dependencies, on how to consume and invest, and to facilitate cross-sectoral and vertical cooperation and partnerships.

Economic players have already learned the value of nature. Biodiversity loss, the many and complex risks it brings to our businesses and finance, and the ways to mainstream nature into all sectors to revert this loss are now a major subject in meeting rooms of corporate executive boards, in the strategy reports provided to insurance companies, and in the products and services offered by consulting and auditing companies. In fact, mainstreaming requires exactly the kind of integrated thinking that permeates the concept of an ecological civilization, a key concept chosen as theme by China for COP15.

Working in the UN's flagship multilateral agreement on biodiversity, I see how important it is for national governments to realize the dependencies of our peace and stability and of our economies and finances on the range of living beings, ecosystems and genetic resources on Earth, as well as the benefits and services they provide to all people. I also realize the timeliness and opportunity of China's leadership of the convention on life on Earth, and of the proposed theme for the meeting in China's most biodiverse province.

A leadership role for China

A megadiverse and globally significant country, China was one of the first to ratify the convention less than a year after its signature in Rio in 1992. One of the central aspects of the COP15 is the adoption of a 10-year Global Biodiversity Framework, a set of goals and targets that will guide the efforts of all member governments and the UN agencies that support them. A long-term approach to mainstreaming and strategies for capacity building and mobilization of financial resources to back these targets are part of the expected decisions.

In preparing for the conference, it has become clear that China can play a globally significant leadership role on those points.

Due to its steep rates of urbanization and development, China has developed responses to many of the relevant challenges in mainstreaming. The progress on greening the Belt and Road Initiative and the advanced safeguards of the Asian Infrastructure Investment Bank are good examples. As the focal point for the convention, China's Ministry of Ecology and Environment has hosted meetings on the biodiversity elements in South-South cooperation and urban development. South-South cooperation can open new doors for green economies.

National governments have already highlighted which sectors affect biodiversity most. At COP13, decisions were made regarding the sectors of agriculture, fisheries, forestry and tourism; energy and mining, infrastructure, health, manufacture and distribution were considered at COP14. The finance community, a complex set of players across public and private interests, is also clearly involved. Other critical players include the "lifestyle" sector (fashion and cosmetics), innovation and information technology, and media, communication and advertising. China has biodiversity champions in all of these domains, as well as on sustainable design, research and development cooperation.

The national governments we serve in the convention need Chinese stakeholder engagement and support to implement the objectives of the convention and the Global Biodiversity Framework. Many UN agencies in which China is leading, such as the Food and Agricultural Organization, are fronting substantial mainstreaming plans and strategies. The country's river restoration and green urban development approaches, such as sponge cities, have earned international recognition. We need China's best practices, both in transition and in transformation.

In the Secretariat of the Convention on Biological Diversity, we stand ready to support China's best examples in green and circular economic approaches. The Sharm to Kunming Action Agenda is a call to register and showcase progress on commitments and implementation by non-state actors, and a recent NGO forum in preparation for COP15 welcomed more than 600 participants from China alone. Mainstreaming biodiversity is both an area of global excellence and an ongoing challenge for China's future – and the way it will address this will help format the global agenda at least for the next 10 years.