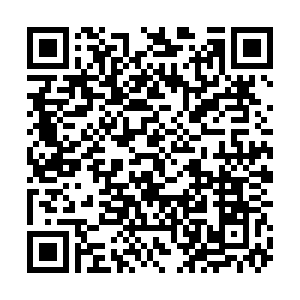 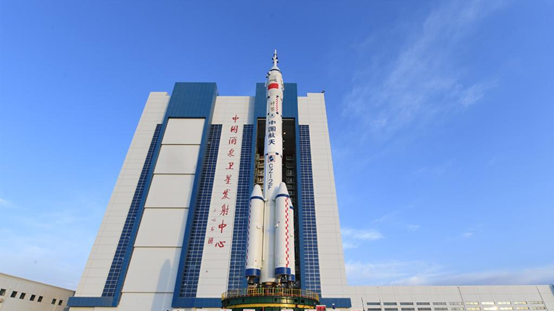 Three Chinese astronauts, or taikonauts – Zhai Zhigang, Wang Yaping and Ye Guangfu – will head onboard Shenzhou-13 spacecraft to the core module of China's space station at 00:23 on October 16 Beijing Time (1623 GMT on October 15), the China Manned Space Agency (CMSA) announced on Thursday during a press briefing.

The Shenzhou-13 mission is the second of four manned missions for the construction of China's space station, Tiangong.

The trio will stay in space for six months, the longest ever in-orbit duration for taikonauts.

The launch will be carried out with a Long March-2F carrier rocket from the Jiuquan Satellite Launch Center in northwest China. All facilities at the launch site are in good condition, said Lin Xiqiang, deputy director of the CMSA.

After entering orbit, the spaceship will conduct a fast automated rendezvous and docking with the in-orbit space station core module Tianhe.

The taikonauts will live and work in the core module according to the same timetable as on Earth, said Lin.

After six months, they will return to the Dongfeng landing site in north China's Inner Mongolia Autonomous Region taking the return capsule. 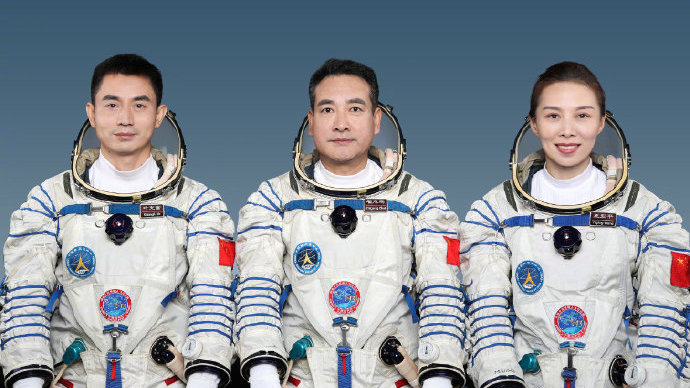 Here are some basic facts about the three taikonauts: 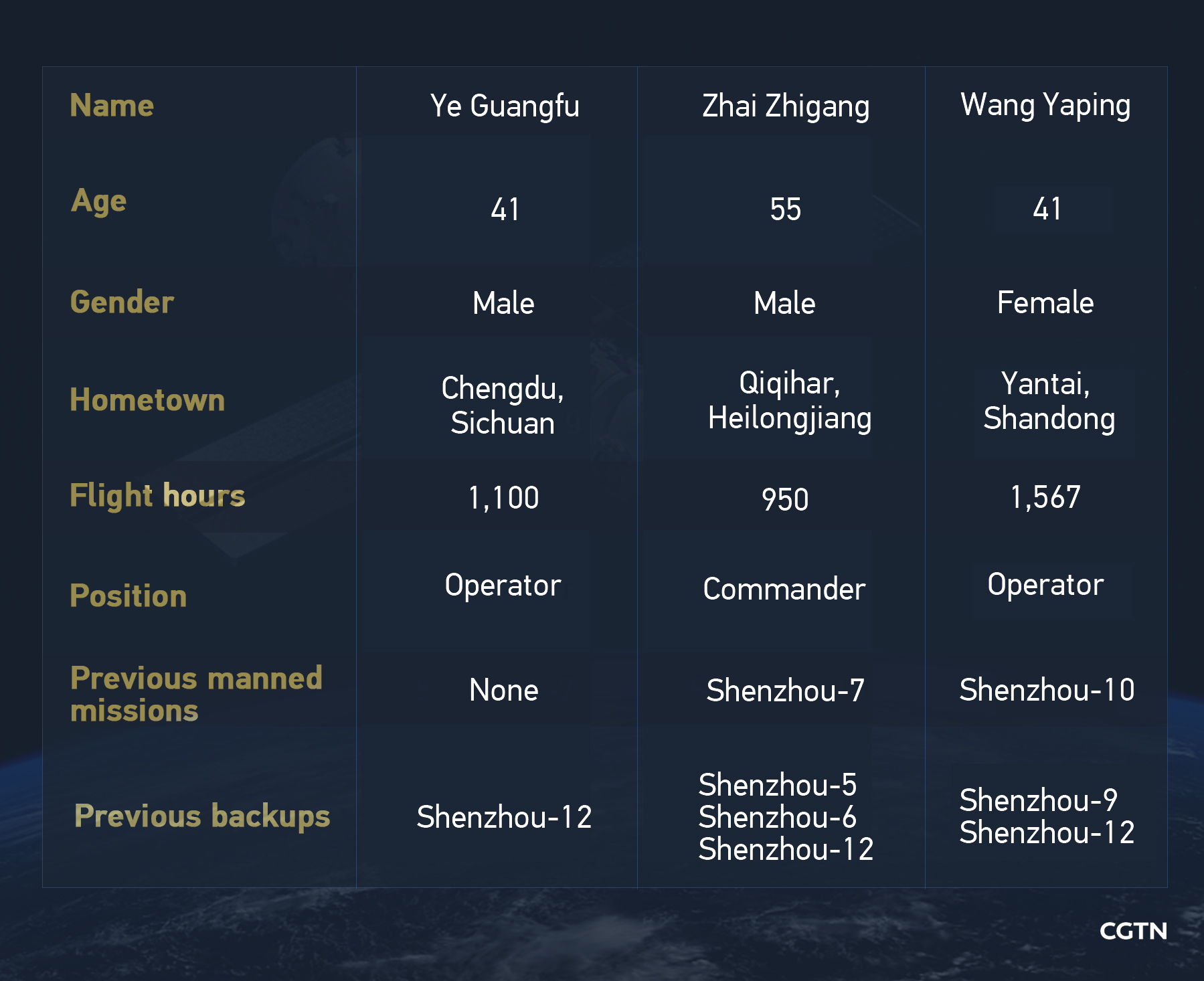 Born in October 1966, Zhai was the first Chinese taikonaut to conduct a spacewalk, making China the third country in the world to master the technology for extravehicular activities.

As the most experienced crew member of Shenzhou-13, he will be the commander of the mission.

Zhai was admitted to the first batch of taikonauts in 1998. He was among the final groups to train for the Shenzhou-5 and Shenzhou-6 flights, but finally flew aboard the Shenzhou-7 spacecraft.

During the Shenzhou-7 mission in September 2008, Zhai served as the commander of the spacecraft. He performed a landmark 20-minute spacewalk with the help of Liu Boming, who later became one of the Shenzhou-12 crew.

Born in 1980, Wang was China's first millennial taikonaut and the second female taikonaut to go to space.

She will become the first Chinese female taikonaut to work in the country's space station, and also the first to conduct extravehicular activities, according to the CMSA.

In May 2010, Wang was selected to be a member of the second batch of taikonauts.

In June 2013, Wang and two other crewmates, Nie Haisheng and Zhang Xiaoguang, were sent to space aboard Shenzhou-10. She gave a lecture about space during the mission through a live broadcast, a first for China, reaching and inspiring millions of school children across the country.

Ye, also born in 1980, was selected for the second batch of taikonauts in 2010 and qualified for manned space flight in 2014. This will be his maiden flight in space.

Ye speaks fluent English and is regarded as one of the key taikonauts to host foreign counterparts when China's space station becomes fully operational.

What is China doing with the Shenzhou-13 mission?

The major tasks of the mission include:

4. Scientific experiments and demonstrations in areas such as space medicine and microgravity;

5. Comprehensive performance and compatibility assessment of all systems.

China's space station to be completed by end of 2022

China has planned a total of 11 missions to complete the construction of its space station over 2021 and 2022, namely three launches of space station modules, four cargo vessel flights, and four manned missions.

The Shenzhou-13 is the fifth mission this year, following the launch of the Tianhe core module in April, Tianzhou-2 cargo craft in May, Shenzhou-12 crewed spaceship in June and Tianzhou-3 cargo ship in September.

The Tianhe core module, Tianzhou-2 and Tianzhou-3 cargo spacecraft have formed a complex operating in orbit. The three Shenzhou-12 taikonauts spent three months in space and returned to Earth in September.

After completion of the Shenzhou-13 manned mission in April 2022 and a comprehensive evaluation of the entire system of the project, China will carry out the remaining six missions to complete a fully-operational space station by the end of next year. 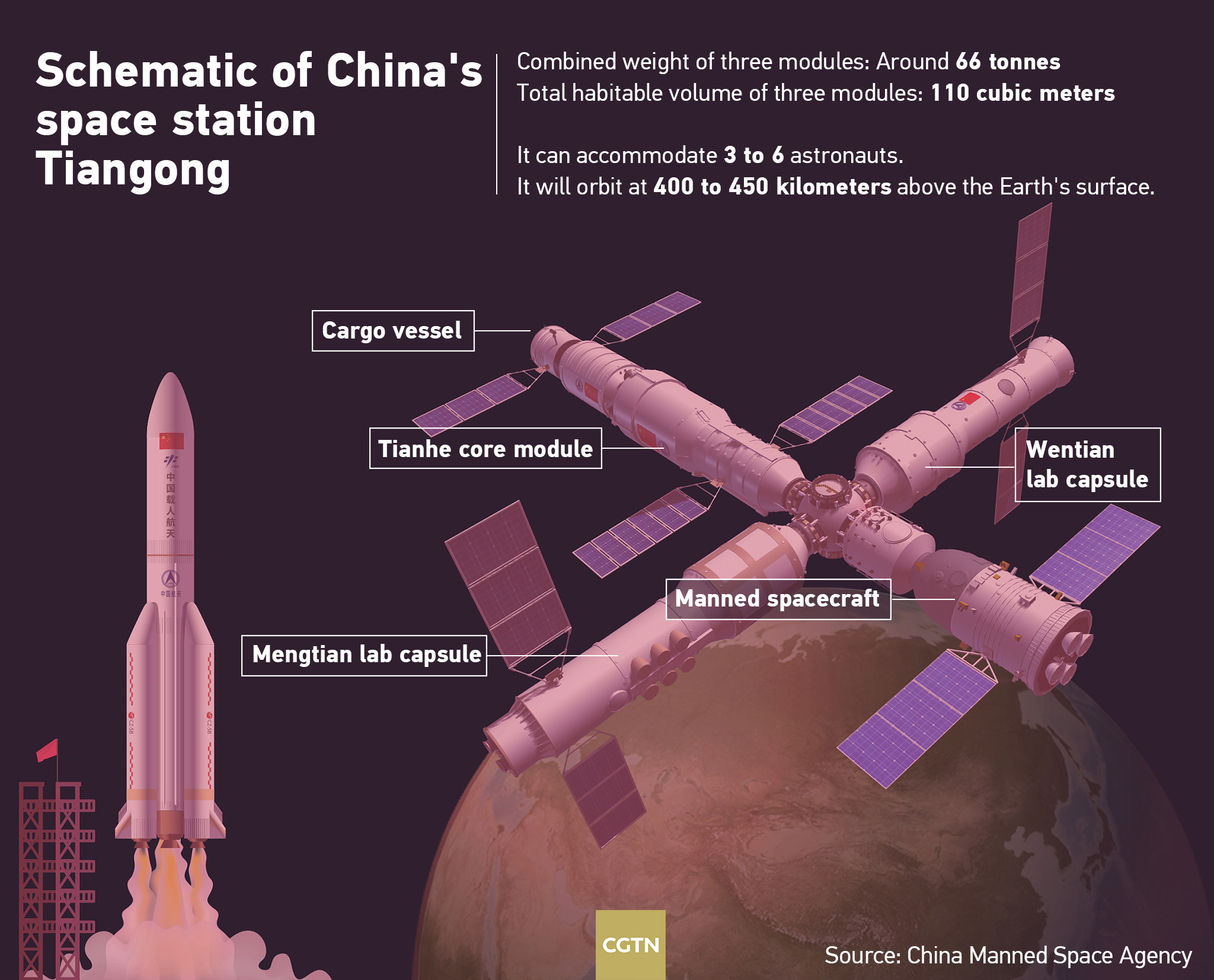 During the Shenzhou-14 crew's stay in orbit, the Wentian and the Mengtian lab modules will be launched to dock with the Tianhe core module.

The Tianzhou-5 cargo spacecraft and the Shenzhou-15 spaceship will then be launched to begin the in-orbit rotation of the crew in the space station.