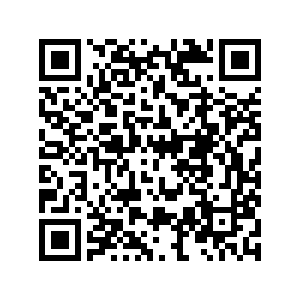 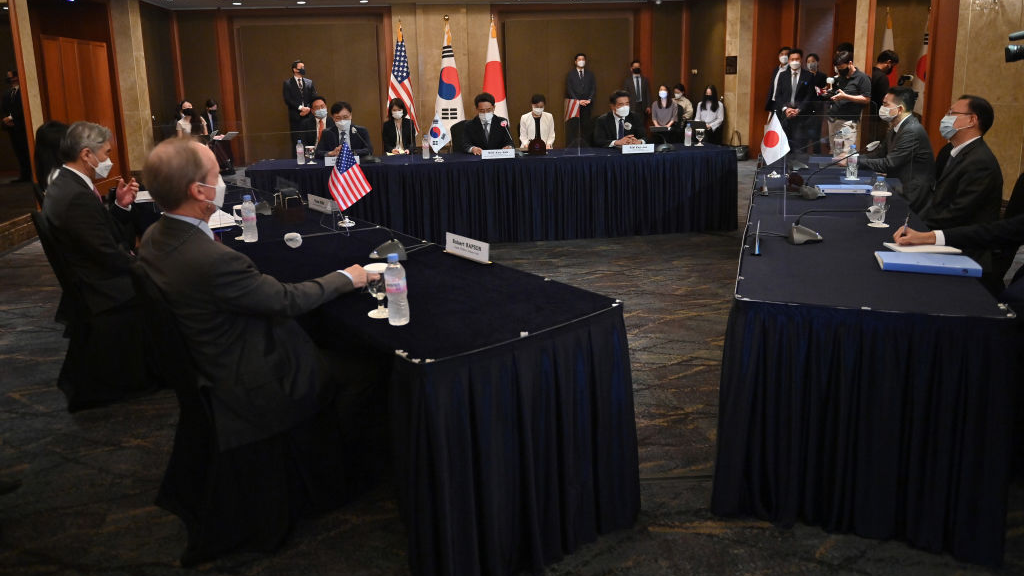 U.S. Special Representative for the DPRK Sung Kim talks with Noh Kyu-duk, South Korea's special representative for Korean Peninsula Peace and Security Affairs, and Takehiro Funakoshi, director-general of the Asian and Oceanian Affairs Bureau of the Ministry of Foreign Affairs of Japan, during their meeting at a hotel in Seoul, South Korea, June 21, 2021. /Getty

U.S. Special Representative for the DPRK Sung Kim talks with Noh Kyu-duk, South Korea's special representative for Korean Peninsula Peace and Security Affairs, and Takehiro Funakoshi, director-general of the Asian and Oceanian Affairs Bureau of the Ministry of Foreign Affairs of Japan, during their meeting at a hotel in Seoul, South Korea, June 21, 2021. /Getty

Amid rising uncertainty on the Korean Peninsula, the U.S., South Korea and Japan engaged in intensive diplomacy this week. On October 18, the intelligence chiefs of the three countries met in Seoul. The next day, the three countries' special representatives for the Democratic People's Republic of Korea (DPRK) met in Washington, D.C.

This flurry of meetings indicates the urgency of the DPRK issue, but what the Biden administration's DPRK policy will be like and what implications it will bring to the region is yet waiting to be seen.

Restart negotiations with the DPRK?

Denuclearization talks on the Korean Peninsula have been stalled since the failed Trump-Kim Hanoi Summit in 2019, and the DPRK issue stays in limbo. The Biden administration is said to have finalized its DPRK policy in May. With the recent flare-ups of tensions with the DPRK repeatedly firing missiles, U.S. new DPRK policy will be put to the test.

Given the current developments, the Biden administration seems to be distancing itself from the Trump-style "maximum pressure" and differentiating itself from an Obama-style "strategic patience." While it continues the "complete, verifiable and irreversible denuclearization" mantra, it also offers to restart denuclearization talks.

White House spokesperson Jen Psaki talked on Tuesday about "the urgent need for dialogue and diplomacy" and reiterated U.S. offer to "meet anywhere, any time, without preconditions."

The Biden administration is also making bolder moves to threaten the DPRK back to the negotiating table. In May, the U.S. lifted the missile restrictions on South Korea. South Korea recently test-fired its first submarine-launched ballistic missile, and plans to build major new weapons include aircraft carriers. This new development is complicating the security situation on the Peninsula. 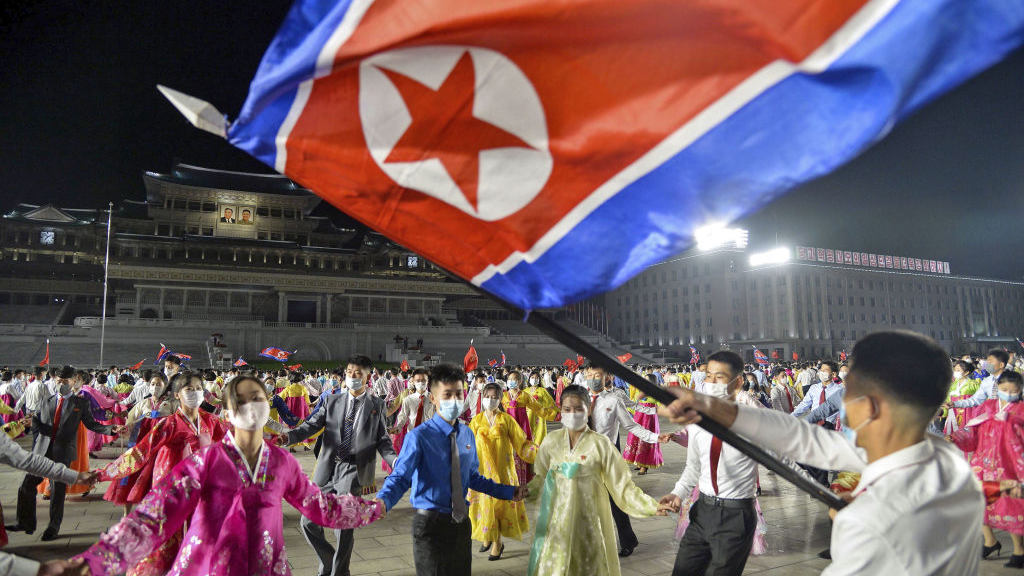 People gather at Kim Il Sung Square to celebrate the 76th anniversary of the founding of the ruling Workers' Party of Korea, in Pyongyang, DPRK, October 10, 2021. /Getty

People gather at Kim Il Sung Square to celebrate the 76th anniversary of the founding of the ruling Workers' Party of Korea, in Pyongyang, DPRK, October 10, 2021. /Getty

Biden's intention is echoed by his South Korean counterpart. South Korean President Moon Jae-in has been keen on dialogues with the DPRK since taking office, and is now pushing to break down the stalemate and renew talks before his term expires next year.

The DPRK and South Korea resumed hotlines on October 4 after a suspension of 13 months, and the two sides showed willingness for a summit. Approaching the 70-year anniversary of the armistice of the Korean War, President Moon offered to begin negotiations with other parties to the war aimed at a formal end-of-war declaration.

The new tensions drove the U.S., South Korea and Japan to urgent talks. According to the U.S. State of Department, the special representatives of the three countries held discussions on the current situation and reaffirmed their commitment to working trilaterally toward the goal of the denuclearization of the Korean Peninsula.

Earlier this week, U.S. Director of National Intelligence Avril Haines flew to Seoul and held a closed-door meeting with intelligence chiefs of South Korea and Japan. It was the second trilateral intelligence meeting since the May meeting in Tokyo. In addition, the three countries' top diplomats also met during the United Nations General Assembly in September.

The intensive diplomacy is designed to better align policies among the three countries on the Peninsula issue. But the renewed collaboration is also raising suspicions of a trilateral security partnership in a more broad and confrontational manner.

In fact, the U.S., South Korea and Japan have a mature intelligence-sharing mechanism on the DPRK under the 2014 Trilateral Intelligence Sharing Agreement. In addition, Japan and South Korea share intelligence under their General Security of Military Information Agreement, which was threatened to be suspended due to diplomatic fallout between the two countries in 2019.

The common threat of DPRK missile tests is propelling South Korea and Japan to mend fences and renew their intelligence-sharing activity.

With the Biden administration keen on forging a network alliance and partnership as the bedrock in its "Indo-Pacific" strategy, the scope of the intelligence cooperation may extend beyond the DPRK's ballistic missiles.

As a common ally of Japan and South Korea, the U.S. has both the incentive and the capability to pull the two countries into its orbit. It might not be far-fetched to suspect that the trilateral intelligence cooperation will become the "Three Eyes" in Northeast Asia.

However, it is still early to say that a comprehensive and deepened trilateral security partnership would materialize.

For starters, the three have fundamentally diverging interests. For South Korea, the priority is maintaining peace and stability on the Korean Peninsula and striving for an ultimate national reunification. Japan is demonstrating greater interest in bandwagoning with a U.S.-led security apparatus in containing China in the "Indo-Pacific."

Second, Japan and South Korea have unresolved historical animosity. The Japanese atrocities during World War II left permanent trauma in the South Korean psyche, and Japan's refusal to settle compensation for the forced labor and comfort women issue will continue to draw ire among South Koreans. All these would make a Japan-South Korea alliance unlikely in the current stage.

Last but not least, a confrontational coalition is destabilizing in nature. The U.S.-initiated QUAD and AUKUS have already disrupted regional stability, a "U.S.-South Korea-Japan security alliance" will cause more alarm and will cause pushback in the region.