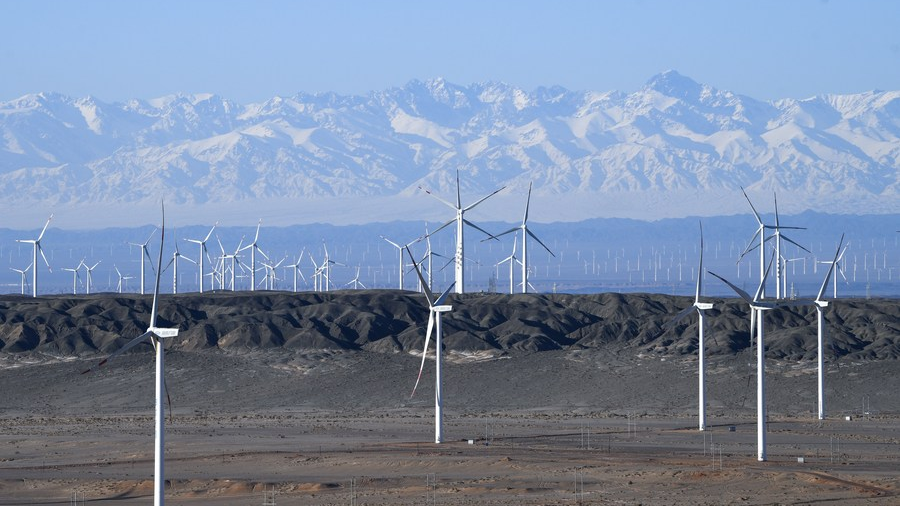 China has begun a series of large wind power and photovoltaic projects in its desert areas in mid-October, the country's top economic planner said Saturday.

According to the National Development and Reform Commission, these projects are situated in north China's Inner Mongolia and northwest China's Gansu, Qinghai and Ningxia, with an installed capacity of nearly 30 million kilowatts.

The commission said that promoting wind and photovoltaic power will help restore the ecosystems in desert areas, boost local economy, and contribute to the country's carbon-cutting endeavors.

These projects are among the country's list for developing wind and photovoltaic power in desert areas. The total installed capacity is estimated to reach 100 million kilowatts if all projects on the list are completed.

China has formulated and implemented a variety of strategies, regulations, policies, standards and actions to meet its targets in response to climate change, said a white paper released on Wednesday.

In 2020, China announced new targets and measures. It aims to peak carbon dioxide emissions before 2030 and achieve carbon neutrality before 2060, and lower its carbon intensity by over 65 percent by 2030 from the 2005 level.

China will establish an energy system that is clean, low-carbon, safe and efficient, increasing the share of non-fossil energy consumption to around 20 percent by 2025, around 25 percent by 2030, and over 80 percent by 2060, according to a guiding document unveiled on October 24 by the Chinese authorities.