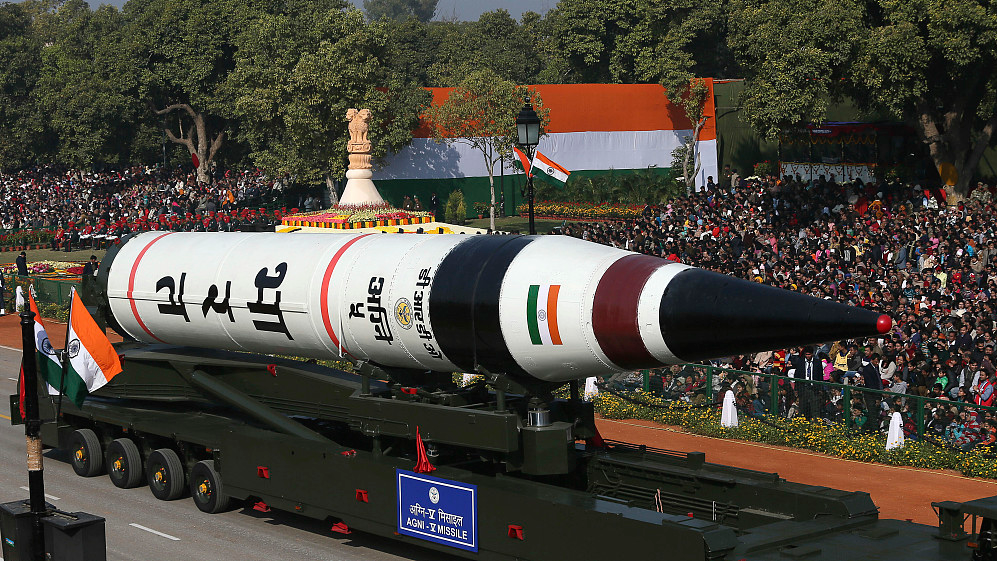 On the threat of nuclear weapons during conflict, the rule is that skirmishes, tensions and conventional conflicts between countries need to be resolved through confidence-building measures and dialogue to prevent it from descending into the nuclear domain, when conversely, adding nuclear dimensions to tensions would only exacerbate trust deficits and threaten nuclear nonproliferation.

Despite this, better sense has not prevailed in New Delhi either on the results of Corps Commander-level talks or the decision to establish credible deterrence, given its decision to test a nuclear capable intercontinental missile (ICBM) called "Agni-5" amid tensions with China with a range of 5,000 kilometers on October 27.

The missile, which descended into the Bay of Bengal, is touted to have a high degree of accuracy, yet it belittles the significance of border talks with China, which was previously considered pivotal by Defense Minister Rajnath Singh.

Furthermore, India tackling China by strengthening its weapons systems will not resolve its numerous internal quagmires, which include a pandemic stricken economy and challenges to inclusivity. Instead, it brews misunderstandings, increases the risk of miscalculations, and provides an impression that the New Delhi leadership wishes to pursue a path of expansionism and deterrence rather than de-escalation or diffusion.

There are several reasons as to why this line of action is counterproductive. Firstly, China has not once tapped into the nuclear domain while dealing with the border crisis with India, despite confronting other threats of nuclear proliferation in its immediate backyard such as the AUKUS alliance securing transfers of nuclear submarines to Australia.

Secondly, the Indian Defense Ministry's claim that the test is in line with a stated policy of credible minimum deterrence with a "No First Use" policy can potentially translate into full spectrum deterrence by equating adversarial advances with threat perceptions to be dealt by force.

If one is to examine the October 10th Corps Commander-level talks between the two sides, which are cited as a justification for Indian nuclear adventurism closely, there was an agreement to maintain communications and stability on the ground while taking into account the overall scope of bilateral relations while making decisions.

India's decision to test also detracts from the remarks of the Chinese Military's Western Theater Command that Beijing was making tremendous efforts to ease the tense border situation in the strategically significant Galwan Valley.

Since the Galwan clashes of 2020, a three-tiered approach was previously adopted by both China and India. At the diplomatic level, dialogue tracks between India's External Affairs Minister S. Jaishankar and China's Foreign Minister Wang Yi have taken place alongside talks between National Security Advisor Ajit Doval and senior diplomat Yang Jiechi. Such nuclear maneuvers, however, have a potential spiraling effect on nuclear proliferation with threat perceptions prompting other states to respond with apprehension, defiance or denunciation. As a Quad member state, India has witnessed how the AUKUS alliance in the Asia-Pacific resulted in leaderships in South East Asia shunning the prospect of nuclear submarines being operationalized in their immediate neighborhood.

Similarly, India's nuclear maneuvers have constantly been interpreted by neighboring Pakistan as evidence of expansionist designs with a probable two-pronged approach directed at both Islamabad and Beijing, given their tense bilateral relationship with the former.

India already retains the ability to strike any territory within Pakistan, which prompted Islamabad to deploy Tactical Nuclear Weapons to offset conventional disparity. South Asia cannot afford such a scenario especially as China strives to play a key role in cementing regional connectivity amid a tenuous situation in Afghanistan, which requires regional consensus instead of inflammation of tensions.

Testing the 50-tonne intercontinental missile, which can carry a nuclear warhead of more than one-ton and is capable of neutralizing targets threatening India's sovereignty as mentioned by Defense Ministry spokesperson Lt. Col. Abhinav Navneet, will only demonstrate India's rigidity and uncompromising attitude towards negotiations.

It will also establish the fact that India has an appetite to confront China militarily. Not much will be achieved with nuclear ICBM tests besides proliferation and an inability to reach an unconditional agreement with China.