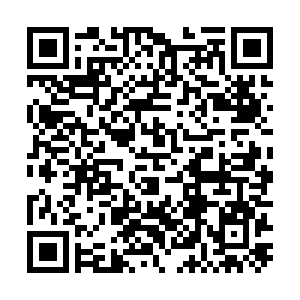 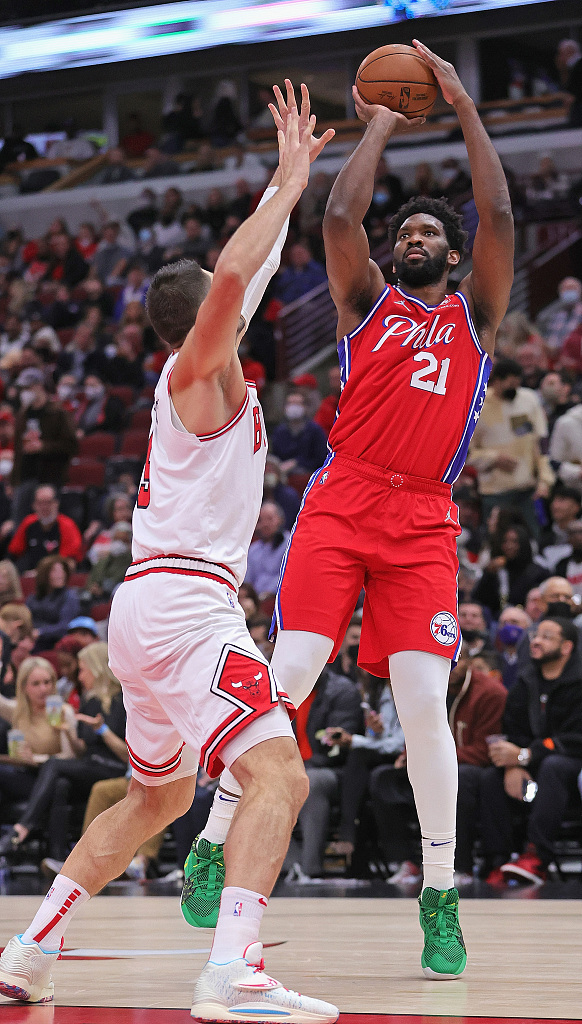 Joel Embiid (#21) of the Philadelphia 76ers shoots in the game against the Chicago Bulls at United Center in Chicago, Illinois, U.S., November 6, 2021. /CFP

Joel Embiid (#21) of the Philadelphia 76ers shoots in the game against the Chicago Bulls at United Center in Chicago, Illinois, U.S., November 6, 2021. /CFP

The Philadelphia 76ers beat the Chicago Bulls 114-105 at Chicago's United Center on Saturday, claiming the sixth win in a row.

This was the second time the two teams met in four days and the 76ers repeated their victory over the Bulls on the road after Joel Embiid dropped a dominant double-double of 30 points, 15 rebounds, three assists and two blocks. He went 5-5 in field goals to get 14 points in the second quarter, leading the 76ers to a 15-0 run to establish initial advantage early in the game.

Though his accuracy dropped in the second half, Embiid was still able to stand out for his team at clutch time. He made two triples in the last quarter, one to gain back the lead and the other to seal the win for the 76ers.

Furkan Korkmaz became the other sharp blade on offense for the team as he drained seven shots from downtown to get 25 points. His perimeter firepower made the Bulls pay by closing in and trying to trap Embiid. 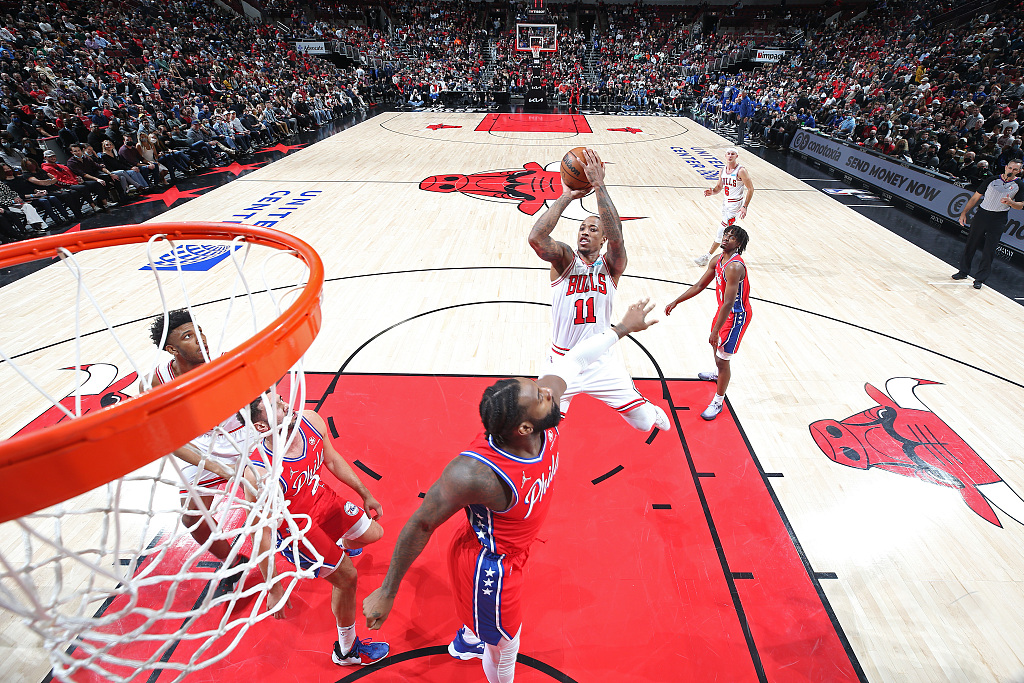 DeMar DeRozan (#11) of the Chicago Bulls shoots in the game against the Philadelphia 76ers at United Center, November 6, 2021. /CFP

DeMar DeRozan (#11) of the Chicago Bulls shoots in the game against the Philadelphia 76ers at United Center, November 6, 2021. /CFP

Despite the loss, the Bulls fought almost to the last moment at home. Zach LaVine had a night of struggle from the 3-point line where he was 3-10, but he was very productive under the rim, shooting 5-8 there and earning eight free throws.

DeMar DeRozan was still the team's most efficient offensive choice thanks to his isolation plays in the middle range. He is also one of the few who did not reduce their productions at the free throw line as he went 10-12 there in Saturday's game.

Nikola Vucevic made underestimated contributions for the Bulls as well. His FG rate of 31.3 percent (5-16) was ugly and happened mostly because of the 1-7 triple attempts. But Vucevic was 4-6 around the paint, which was not bad considering he was often defended by Embiid or Andre Drummond. His major credit was to lure Embiid away from the rim by standing at the free throw line, creating a defensive vacuum in the 76ers' paint.

That's why the Bulls were able to grab 18 offensive rebounds and turned them into 22 second-chance points. 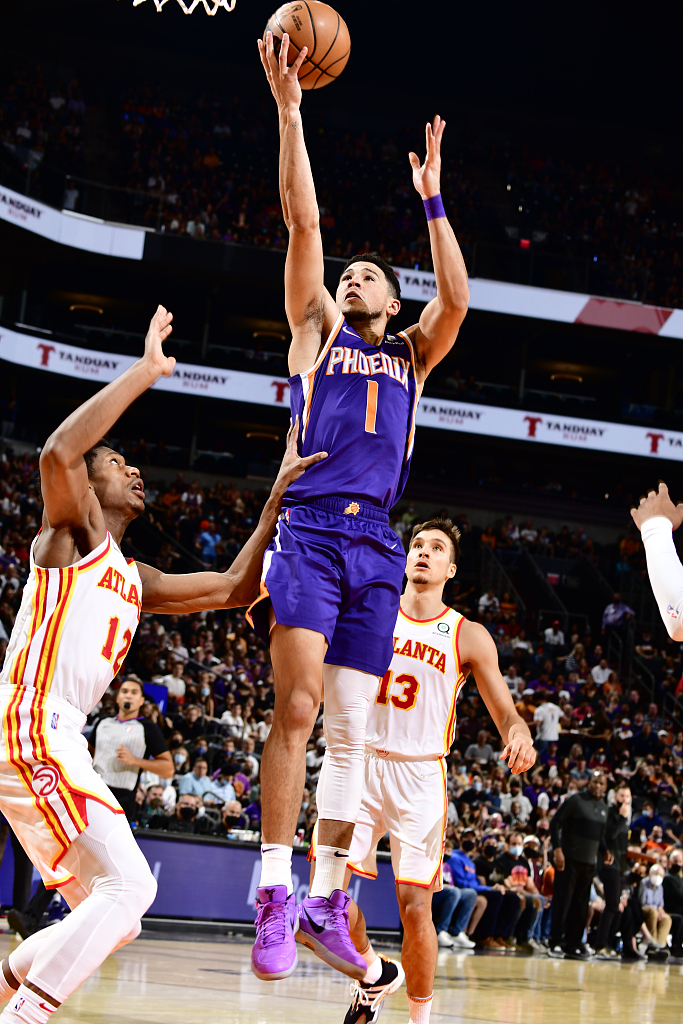 Devin Booker (#1) of the Phoenix Suns shoots in the game against the Atlanta Hawks at Footprint Center in Phoenix, Arizona, U.S., November 6, 2021. /CFP

Devin Booker (#1) of the Phoenix Suns shoots in the game against the Atlanta Hawks at Footprint Center in Phoenix, Arizona, U.S., November 6, 2021. /CFP

The Phoenix Suns pocketed a comeback win of 121-117 over the Atlanta Hawks at Footprint Center on Saturday.

Devin Booker was unstoppable to the Hawks' defense as he went 14-21 in FGs and 5-9 in triples to get 38 points, six rebounds and four assists. No matter who the opponents sent to defend him, Booker always found a way to put the ball in the hoop.

The Suns trailed by 12 points (98-86) after the 40-27 run in the third quarter but returned a 35-19 run in Q4 thanks to Chris Paul's 10 points and five assists in this quarter. Not only did he make all three jumpers, Paul also ran the team's offense reasonably when they were on their way back. 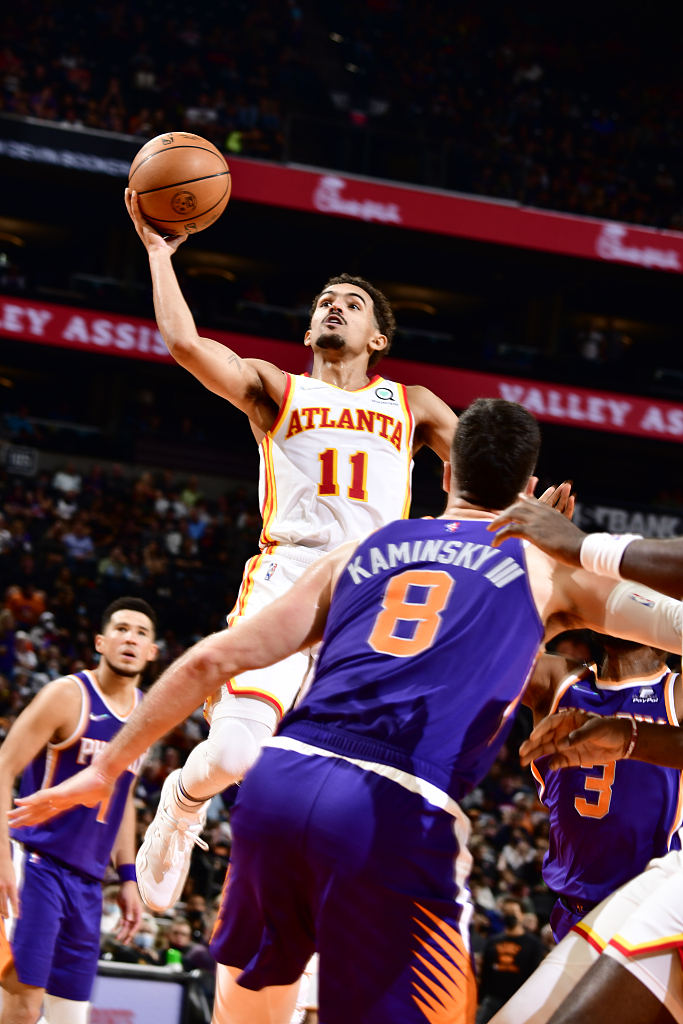 Trae Young (#11) of the Atlanta Hawks drives toward the rim in the game against the Phoenix Suns at Footprint Center, November 6, 2021. /CFP

Trae Young (#11) of the Atlanta Hawks drives toward the rim in the game against the Phoenix Suns at Footprint Center, November 6, 2021. /CFP

By contrast, Trae Young became a bad example for playmakers with his irrational choices in Q4. Having put down 27 points and 11 assists already in the first three quarters, Young seemed still lapped in the scoring contest with Booker. As a result, he went 1-7 in FGs this quarter while the whole team scurry aimlessly on the floor. The Hawks shot at 27.5 percent in Q4, squandering the valuable lead they worked so hard to build.

"I don't know if it was what we did or what they did. They kind of picked up the energy and used the home crowd for momentum and kind of road the wave. They made a couple of more plays than we did," Young said after the game.

"We just lost our poise. I thought we started to rush, we got caught up in the officiating again. That became a distraction," Nate McMillan, head coach of the Hawks said.

Other games on Saturday (away teams come first):