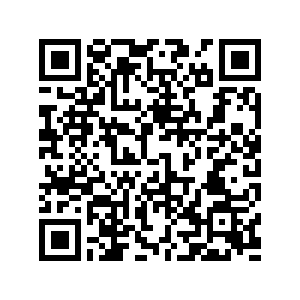 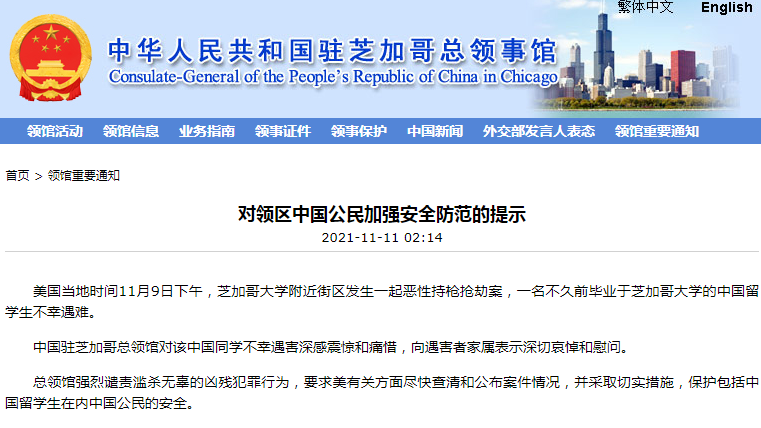 The Chinese Consulate General in Chicago confirmed on Wednesday that a Chinese student who recently graduated from the University of Chicago (UChicago) was fatally shot in a robbery on Tuesday afternoon in the city's Hyde Park neighborhood.

Deploring the student's death, the Chinese Consulate General in Chicago urged parties concerned in the United States to investigate the case and publish related information as quickly as possible, while adopting concrete measures to ensure the safety of Chinese nationals including the students in the country.

The 24-year-old student was on a sidewalk at around 1:54 p.m. Tuesday when a dark-colored vehicle approached. A man left the vehicle, took out a gun, demanded property, and then shot the student in the chest, according to information from UChicago Police.

The victim was taken to the UChicago Hospital where he was pronounced dead. The shooter went back into the vehicle and fled.

A statement issued by UChicago President Paul Alivisatos and Provost Ka Yee C. Lee on Tuesday confirmed that a recent graduate of the university was shot and killed off-campus in the course of a robbery. "The graduate's name will be shared once their family has been notified."

"We are working with the Chicago Police Department to gather more facts about the case," the statement read.

This is the second case of a Chinese student being killed in Chicago in 2021. On January 9, 2021, Fan Yiran, a UChicago doctoral student from China, was killed in a random shooting spree.

Through the first eight months in 2021, Chicago, the U.S.'s third-largest city, had recorded 524 homicides and 2,344 shootings, which were up 3 percent and 9 percent, respectively, over the same period last year, according to data from the Chicago Police Department.

(Cover image: People take a selfie near a sign reading "stay 6 feet apart at all times" on the University of Chicago campus in Chicago, May 6, 2021. /CFP)