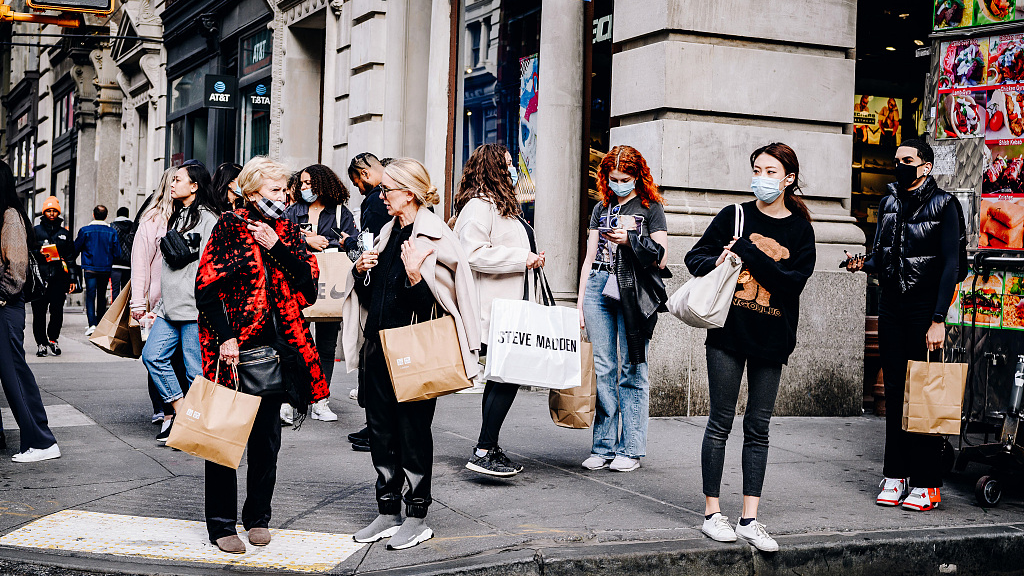 Pedestrians wait to cross a street in the SoHo neighborhood of New York, U.S., October 24, 2021. /CFP

Pedestrians wait to cross a street in the SoHo neighborhood of New York, U.S., October 24, 2021. /CFP

October's consumer price index (CPI) in the U.S. increased 6.2 percent from October a year ago, the fastest pace since 1990. It rose 0.9 percent from September in the biggest gains since June.

The persistent elevating inflation rates since the beginning of the year are now raising serious questions as to how long the inflation pressure will stay and what kind of impact it will have on global financial markets.

The trend seems set to continue in the coming months. The components driving the headline inflation figures are from energy and transportation; CPI for energy rose 30 percent from a year ago, and 26.4 percent for used cars and trucks.

Crude oil's uptrend remains intact and the price shows no signs of easing, suggesting the energy CPI in the months ahead is likely to be similar to October's.

Meanwhile, chip shortages in the automaking industry do not look to be easing anytime soon, together neither do the supply chain bottlenecks. As a result, the surges in used-car demand are likely to continue.

Even with the severe supply chain disruption and higher raw material prices over the past few months, U.S. companies broadly reported resilient earnings in the third quarter. As of this week, more than 80 percent of companies in the S&P 500 index reported better-than-expected earnings. Such outcomes are certainly good news for stock investors, but not for the consumers.

The upbeat earnings from most U.S. companies from industrials to technology mean they have so far successfully passed on higher costs, such as higher production and labor costs to consumers to maximize profit margins because they have sufficient pricing power. For the current quarter, raw material prices are even much higher than in the third quarter, implying that inflation will accelerate further.

Even with the coronavirus spread in the U.S. easing in recent months, evidence shows that American consumers have become more cautious on spending as the higher inflation outlook weighs on their minds. The latest reading for the University of Michigan consumer confidence index declined to 71.7, the lowest level since 2011.

Key data also points to a weaker outlook on consumption in the U.S. driven by higher inflation. Retail sales have been decelerating on a yearly basis since May, when inflation started accelerating. As consumption accounts for around 70 percent of the U.S. economy, slower retail sales would have a direct impact on the growth outlook.

On the other hand, supply chain shortages together with the rising costs will sooner or later erode companies' profit margins and constrain production. Consumption demand is expected to increase in coming months due to the holiday season, but surging labor costs and production delays may further push the inflation higher and then reduce consumer spending power in the end.

A large proportion of consumption goods in the U.S. is imported from other major economies. Changes in consumption in the U.S. are set to reduce those countries' external demand. Trade data shows that U.S import figures have been decelerating since May as well. The correlation between the JP Morgan global manufacturing PMI and U.S. import growth stood at 0.80 in the past five years, which is perfect evidence that a slowdown in purchasing by U.S. consumers may dent global factory activities.

Expectation that the Fed will accelerate the tightening pace has been gaining traction in recent days after the shocking CPI data was released. The Fed's two-year government bond yield, a key gauge to its benchmark rate, jumped by 12 bps to 0.527 this week, heading to the biggest gains since October 2019.

The average spread between the two-year bond yield and Fed's benchmark rate was at 13 bps, much lower than the current 28 bps, which implied the market expects the benchmark rate to be lifted in near future, a potential risk that would threaten the global financial stability.

For now, U.S. stocks are hovering near historical peaks, as Fed chairman Jerome Powell said he wouldn't consider interest rate increases until the labor market heals further. However, traders in bonds and currency markets have already questioned whether his policy is too dovish based on the current inflationary conditions, and he faces the risk of suddenly turning into more hawkish bias next year should inflation further accelerate. The dollar index also gained almost one percent this week, heading to the biggest increase since August.

The bond market is also flashing signals that the Fed may need to raise the rate more quickly than planned. The spread of the five-year and 10-year government bonds has now narrowed to 32 bps, the lowest since July 2020, as shorter-term rates climb faster than the longer-term ones. On the other hand, a flattening curve also indicates a more sluggish economic outlook from a trader's perspective.

If the Fed is considering abandoning its current relatively dovish stance next year to contain inflation, the downward pressure on stocks and bonds could  increase, especially for those in emerging markets based on past experience. Thus, the inflation data in coming months may hold the key to asset pricing, and further acceleration in inflation may change the Fed's current approach to its monetary policy outlook.