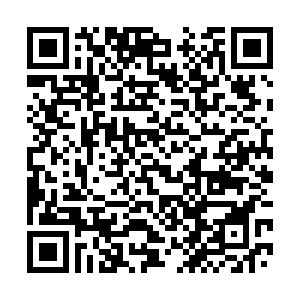 China reiterated that its economic cooperation with the U.S. is highly complementary as the bilateral trade between the two countries increased by 23.4 percent in the first 10 months of 2021.

"The bilateral economic and trade cooperation is in the fundamental interests of the two countries and their peoples, and is also conducive to the recovery of the global economy," said Shu Yuting, spokesperson, Chinese Ministry of Commerce spokeswoman on Thursday.

The world's two largest economies have been mired in a trade war for more than three years, harming U.S. businesses. The prolonged differences prove the former U.S. President Donald Trump's claim, "trade wars are good, and easy to win" wrong.

The punitive tariff is "a failed policy that needs to be reversed," Neil Bush, founder of the George H.W. Bush Foundation for U.S.–China Relations, told ECNS.

"My view of the tariffs is: it was such a stupid idea to start with – raising tariffs was a tax on American consumers, hurting American businesses," Bush said.

U.S. business groups have been lobbying to remove tariffs, saying that duties paid by the businesses ultimately result in higher prices for U.S. consumers.

Bush attributed the U.S. isolationist approach to many of its politicians fearing China's economic rise and saw it as a threat to U.S. prominence.

The trade war proved that political will was not as forceful as expected to wind global trade. Bilateral trade between China and the U.S. was back on the growth track in 2020 against the COVID-19 pandemic-induced disruptions. 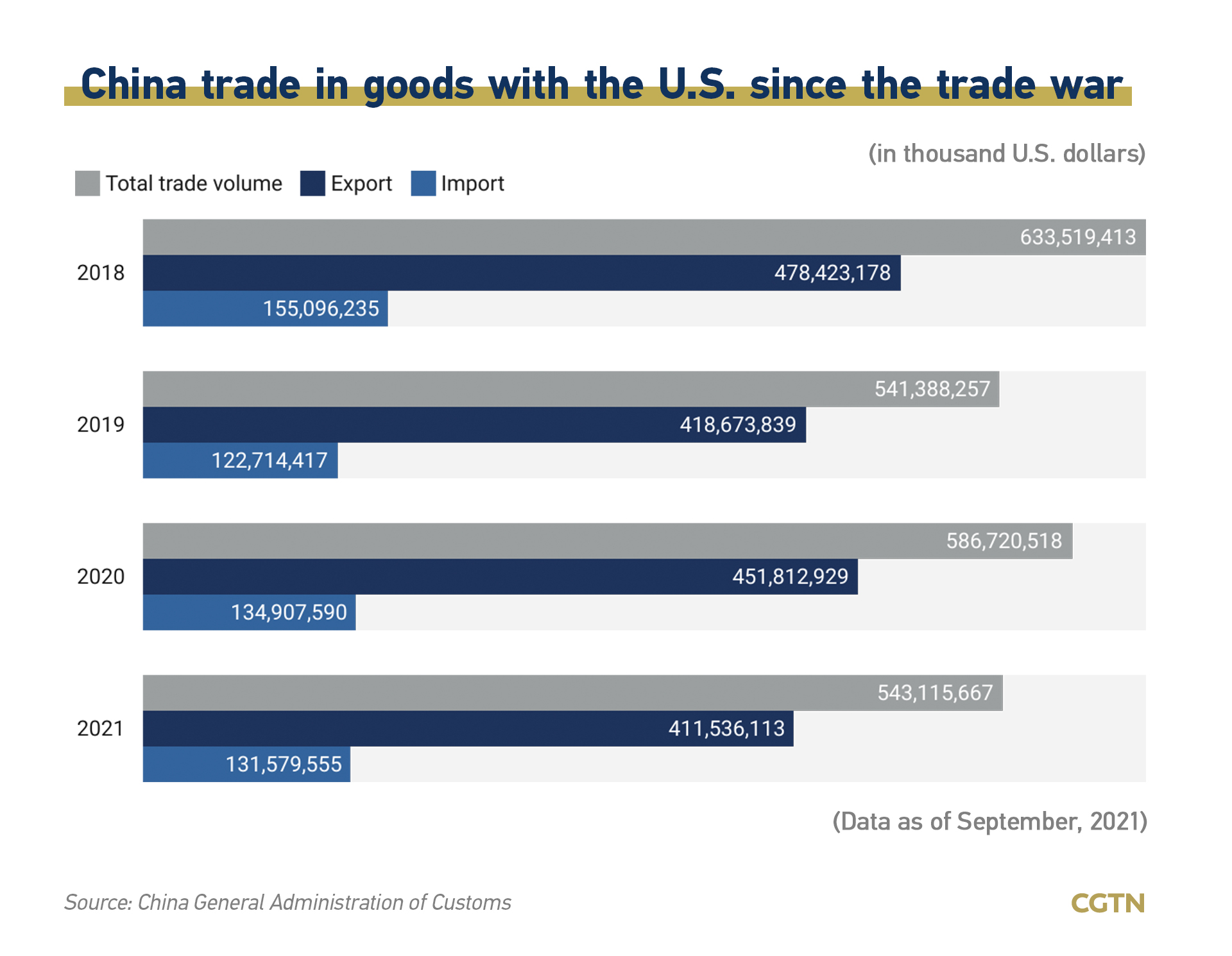 China's exports to the U.S. grew by 7.9 percent year-on-year to $451.81 billion, while its imports from the U.S. rallied 9.8 percent to $134.91 billion, according to data released by the General Administration of Customs (GAC).

In the first nine months of 2021, bilateral trade grew 35.4 percent year-on-year to $543.1 billion, faster than China's trade with other largest trading partners, including ASEAN (up 31.1 percent) and the EU (up 30.4 percent), GAC data shows.

Besides, China is currently the largest goods trading partner to the U.S., with $559.2 billion in total goods trade. According to the U.S. Department of Commerce, its exports of goods and services to China supported an estimated 758,000 jobs in 2019. 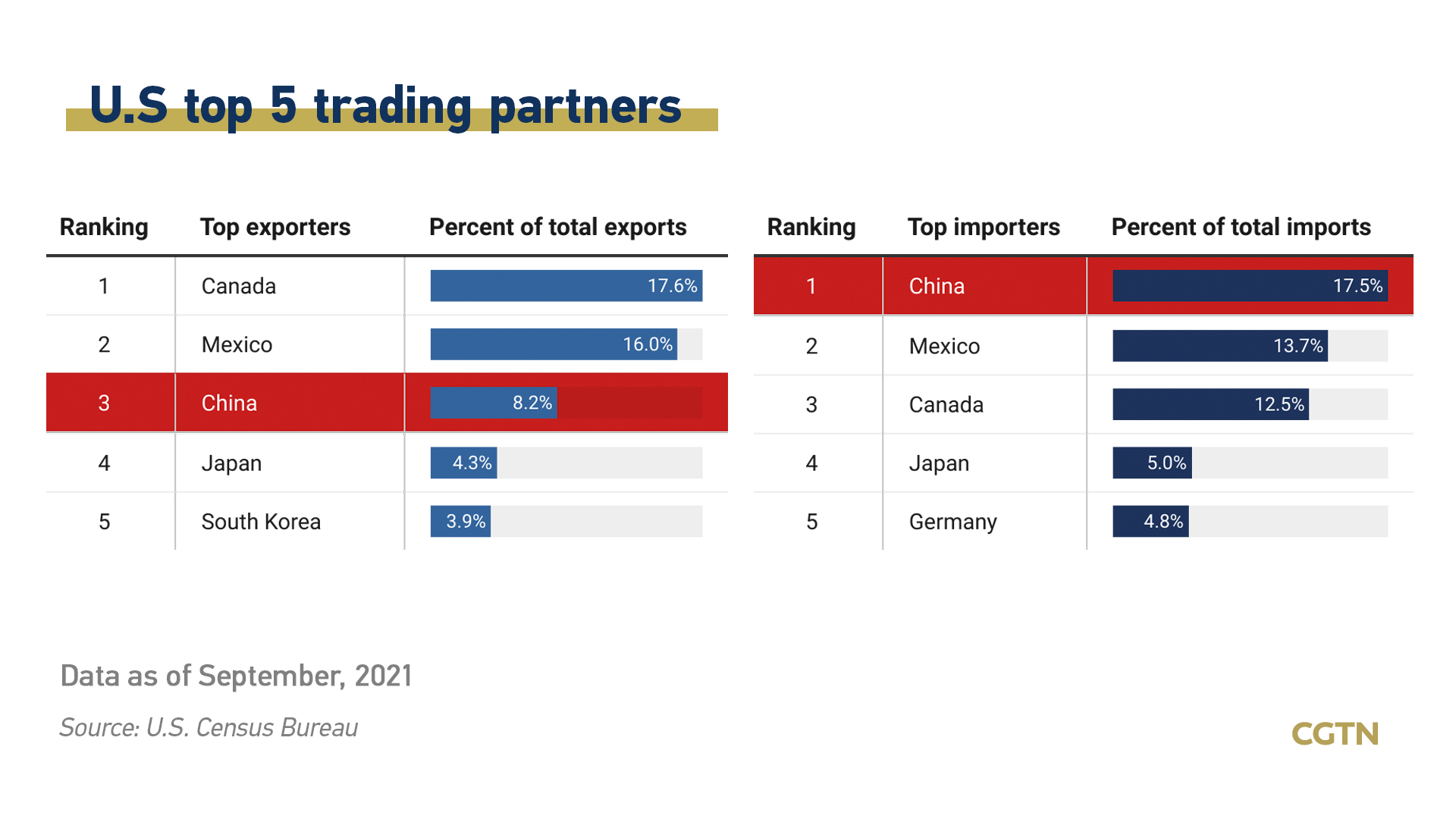 Chinese manufacturing has proved indispensable to the U.S. market, and the Biden administration is more "rational" on trade with China, Chen Fengying, a research fellow with the China Institutes of Contemporary International Relations, said in an earlier interview with CGTN.

Data from the Los Angeles port, the largest container port in the U.S., shows that almost half of the $259 billion trade it facilitated in 2020 involved the Chinese mainland and Hong Kong Special Administrative Region.

Chen said the move makes sense considering the ravaging U.S. inflation. The country's labor department data showed that the annual rate of U.S. inflation surged to the highest level in 30 years, weighing on the family budget and the company's profit margins.

Chinese President Xi Jinping is set to hold a virtual meeting with U.S. President Joe Biden on Tuesday morning. Xi and Biden have so far had two phone conversations this year.