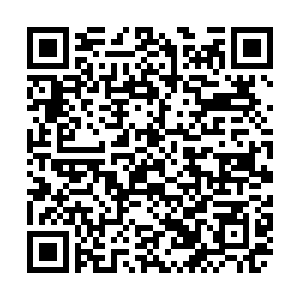 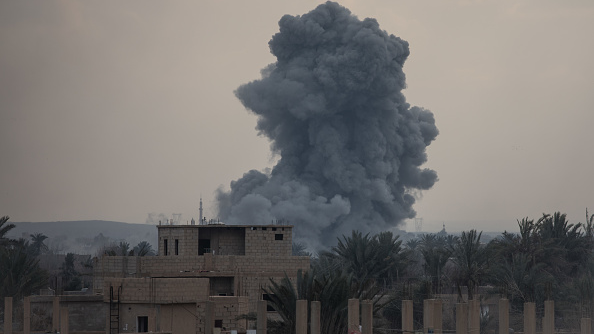 Smoke from an airstrike is seen over buildings near the front line in Bagouz, Syria, February 10, 2019. /Getty

Smoke from an airstrike is seen over buildings near the front line in Bagouz, Syria, February 10, 2019. /Getty

U.S. President Joe Biden's pledge to recalibrate his country's foreign and military policies toward a more values-driven approach was just exposed as insincere by a spokesman from its Central Command. Captain Bill Urban was responding to The New York Times' recent report that the Pentagon covered up a strike against the self-described "Islamic State of Iraq and the Levant" ISIL terrorist group, also known simply as IS, in Syria in 2019 during the time of former U.S. President Donald Trump.

According to the outlet, there were several dozen casualties that included women and children. Urban could have easily blamed the Trump administration for these killings but instead sought to defend that infamous attack as justified. He said an investigation concluded that they were "legitimate self-defense strikes" because "multiple armed women and at least one armed child were observed in the video" that was relayed to drone operators at the time.

No matter what he says, it's never "self-defense" for anyone to bomb civilians. Observing some armed women and one armed child among the group isn't an excuse for killing everyone else. The U.S. should have exercised humanitarian discretion and called off the attack. This was a war crime for which nobody else will be held accountable but the perpetrator, the Pentagon itself.

Having said that, there's also no denying that terrorist groups rely on human shields to deter these types of attacks. That's definitely problematic and cannot be justified either. Be that as it may, those who attack them should modify their tactics to avoid civilian casualties. Since the terrorists were already under surveillance, the strike could have been conducted at another time when there weren't any human shields around.

This interpretation of events speaks to the threat that the U.S. military poses to everyone in the many countries that it operates, sometimes illegally, like in Syria, and other times with the host country's permission. Despite preaching a foreign policy full of "democracy" and "human rights," its military policy blatantly contradicts this rhetoric, thus rendering it nothing more than unconvincing propaganda spewed for soft power purposes. 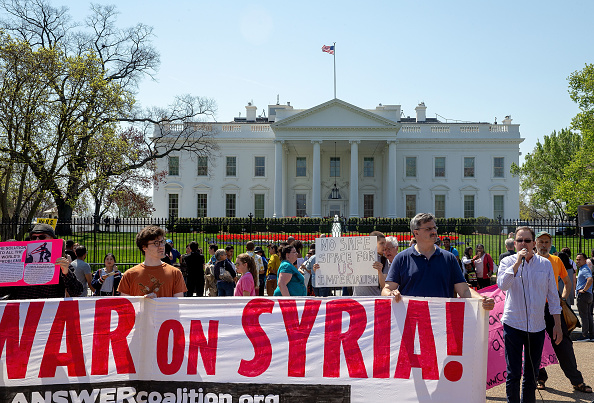 Protesters gather outside the White House and speak out against the latest developments of the strike in Syria in Washington, DC., U.S., April 14, 2018. /Getty

Protesters gather outside the White House and speak out against the latest developments of the strike in Syria in Washington, DC., U.S., April 14, 2018. /Getty

It would have been politically expedient for the Biden administration to blame everything on the Trump administration and potentially even reopen the investigation if it was already concluded by the time the incumbent entered office in late January. That would have shown that he is serious about supporting the same values inside his country as his administration wants outside. The fact that this didn't happen shows that his team wasn't really sincere about this.

The reason for this is that the Biden administration probably wants to continue the Trump administration's war crimes in the many countries where the Pentagon operates. As U.S. officials themselves are always so fond of saying, "all options are on the table," which in this context means that they won't hesitate to kill women and children to take out a couple of terrorist targets. Such a policy is proof of how rogue and dangerous the U.S. has become.

Coincidentally, this major war crime scandal broke out around a month before the U.S. hosts its virtual "Summit for Democracy" from December 9 to 10. The timing, therefore, discredits America's claims about its values since that country won't even hold its own suspected war criminals to account. Even worse, it justifies the killing of women and children as "self-defense," a subjective standard that it certainly wouldn't accept from any other country.

The world should realize that the U.S. is using high-sounding rhetoric to manipulate people's hearts and minds. It wants to deceive others into supporting it by tricking them into thinking that the U.S. truly stands for the same values as they do. It doesn't. This latest war crime scandal shows that the U.S. doesn't care about "democracy," "human rights" nor"transparency." All that it's interested in is power, cover-ups and retaining its hegemony at all costs.