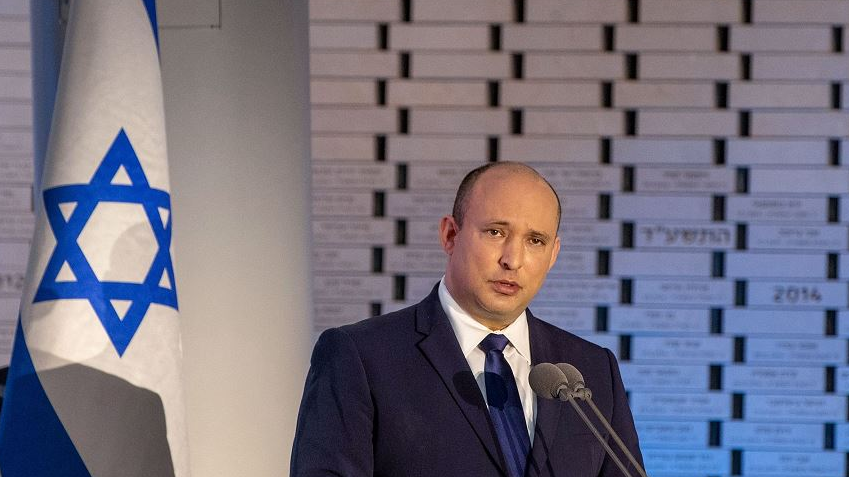 Israeli Prime Minister Naftali Bennett speaks during the memorial ceremony for the fallen soldiers of the 1973 Yom Kippur War, at the Hall of Remembrance on Mount Herzl in Jerusalem, September 19, 2021. /CFP

Israeli Prime Minister Naftali Bennett speaks during the memorial ceremony for the fallen soldiers of the 1973 Yom Kippur War, at the Hall of Remembrance on Mount Herzl in Jerusalem, September 19, 2021. /CFP

Editor's note: Shalom Lipner, a nonresident senior fellow for Middle East Programs at the Atlantic Council, served seven consecutive Israeli premiers over a quarter-century at the Prime Minister's Office in Jerusalem. The article reflects the author's opinions and not necessarily the views of CGTN.

Israeli Prime Minister Naftali Bennett returned from this month's United Nations Climate Change Conference (COP26) feeling buoyant. Hobnobbing with world leaders in Scotland lent credibility to his projected image as a worthy replacement to Binyamin Netanyahu, his polarizing and larger-than-life predecessor who reigned supreme over Israel for more than 12 years. But Bennett's momentum – and his government – could be short-lived unless he is able to exercise prudent leadership in the months ahead.

In November, Israel's Knesset (parliament) passed new budget frameworks for 2021 and 2022 – a huge achievement for Bennett, given that the Knesset had not ratified a fiscal plan since March 2018. This triumph is a double-edged sword, however, because it might easily unleash political forces to precipitate his government's early demise.

The Israeli cabinet is literally a team of rivals, comprising ministers affiliated with the country's ideological right, center and left. Their commitment to working together was forged in the crucible of their shared antipathy toward Netanyahu. A similar aversion to Netanyahu's comportment and policies has been prevalent in certain foreign capitals, where leaders bristle at the prospect of his possible return to power. This has given Bennett additional ballast and mitigated what would likely have been more vocal international criticism of Israel had Netanyahu remained in charge. In fact, Netanyahu is the proverbial superglue that has secured his successor tightly in place thus far.

That adhesive might be dissolving. One significant consequence of the approval of the 2021 budget is the virtual neutralization of the opposition, which requires 61 of the Knesset's 120 members to coalesce around the candidacy of an alternative premier – presumably Netanyahu – to unseat the current government. The haywire results of Israel's four recent, rapid-fire parliamentary elections, during which Netanyahu repeatedly failed to win the backing of 61 legislators, offer convincing proof of that scenario's implausibility. He now acknowledges dejectedly that it could take another three and a half years to topple Bennett's cohort.

Netanyahu's own spiral toward political irrelevance is further hindering his attempts to send Bennett packing prematurely. Although Likud remains the largest caucus in parliament, its declared boycott of Knesset committees has all but disintegrated, leaving the core of Netanyahu's putative government divided and in disarray. Increasingly preoccupied with court dates relating to corruption charges from his tenure as premier, Netanyahu also finds himself busy trying to assuage his frustrated allies, who had become accustomed to the trappings of power.

The resulting vacuum is providing Bennett and his ministers with the dubious luxury of breathing room to promote their respective partisan agendas as never before. Open conflict among the coalition's erstwhile antagonists over the government's course could ultimately render their fragile alliance untenable. Suddenly, and paradoxically, the fledgling government is vulnerable to implosion. 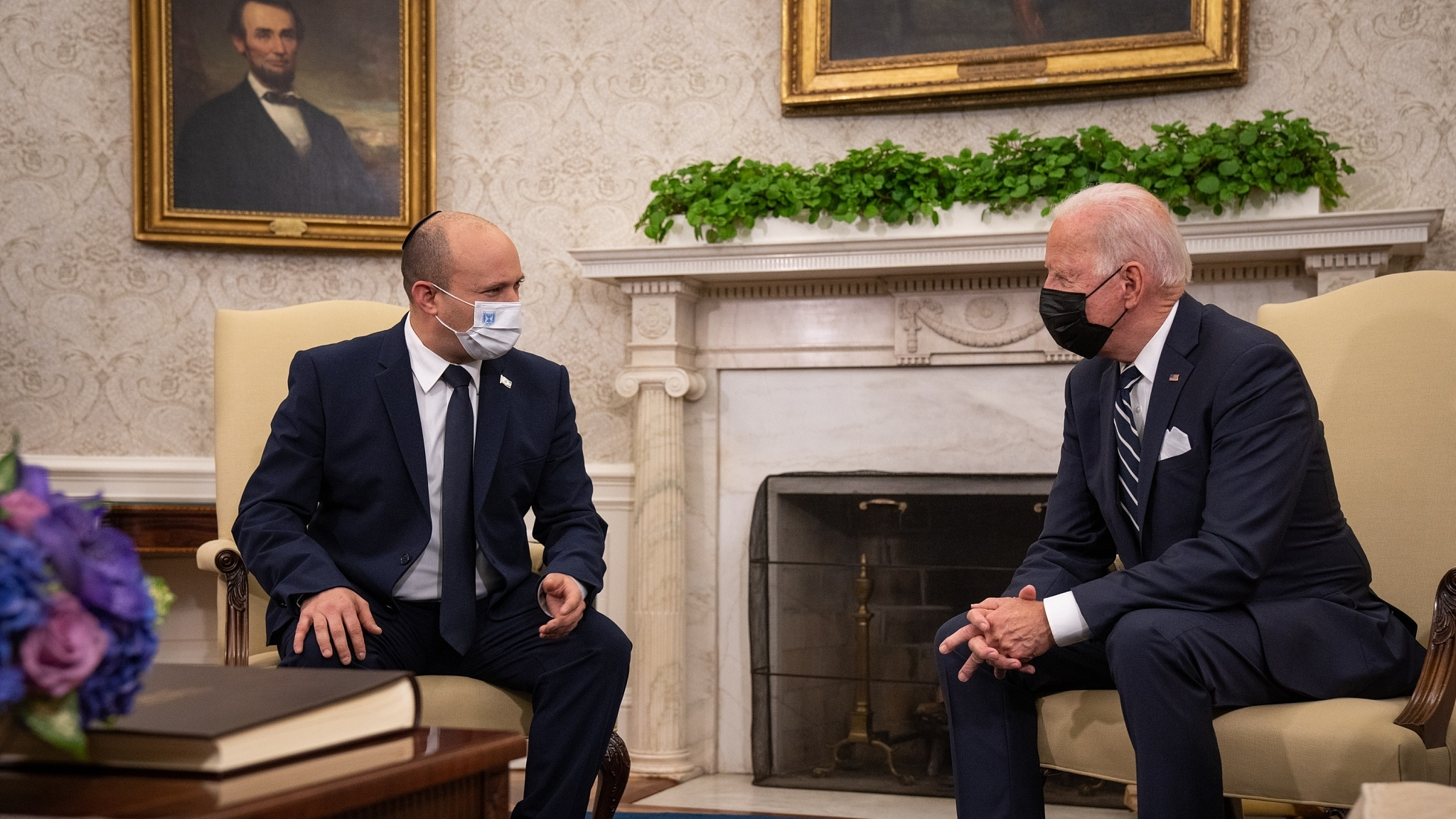 Cabinet disputes erupted recently over the government's moves to criminalize six Palestinian agencies – the groups in question claim to be legitimate civil-society organizations, while Israel says they are connected to terrorist factions – and to greenlight the construction of new settler homes in the West Bank. Looming challenges emanating from serial flare-ups on Israel's borders with Gaza and Lebanon, a potential resumption of diplomatic negotiations concerning Iran's nuclear ambitions, and various items of domestic legislation also threaten to exacerbate intra-coalition tensions.

A parallel risk to the integrity of Bennett's coalition will come from quarters of the global community that have generally applauded his approach, but may now – with Netanyahu's specter having receded – exhibit less tolerance for Israeli policies of which they disapprove. The Joe Biden administration's reaction to Israel's latest settlement announcement was markedly more severe in tone, suggesting that a tipping point may have been reached.

Biden reportedly pledged a temporary delay in reopening the U.S. consulate in Jerusalem – a move that Foreign Minister Yair Lapid warned "might destabilize this government" – until after Israel's budget debate. This may have been a harbinger of mounting international demands for greater flexibility from Bennett. Having passed the budget hurdle, Bennett may soon confront the limits of his power, and his premiership could come to an abrupt end if some of his cabinet partners see him as too compliant with foreign demands.

It is still unclear how much wiggle room Israel's allies will afford Bennett. They might prefer to abide by his more controversial actions if only to clear the path for Lapid – whom some may view as more amenable to their policy goals in the Middle East – to assume the premiership in August 2023, as envisaged under their coalition agreement.

In the meantime, Bennett will need to tread adroitly if he hopes to continue in office long enough to solidify the transformational changes he has begun to implement in domestic and foreign policy. Almost bereft of an electoral base of his own, the prime minister will be anxious to court new voters, but will have to navigate cautiously through a minefield of other actors' clashing politics and principles.

The price of a misstep could be a fifth election contest against a revitalized Netanyahu (if he hangs on) or a new Likud leader – a contest Bennett may not survive.