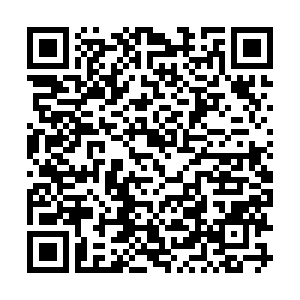 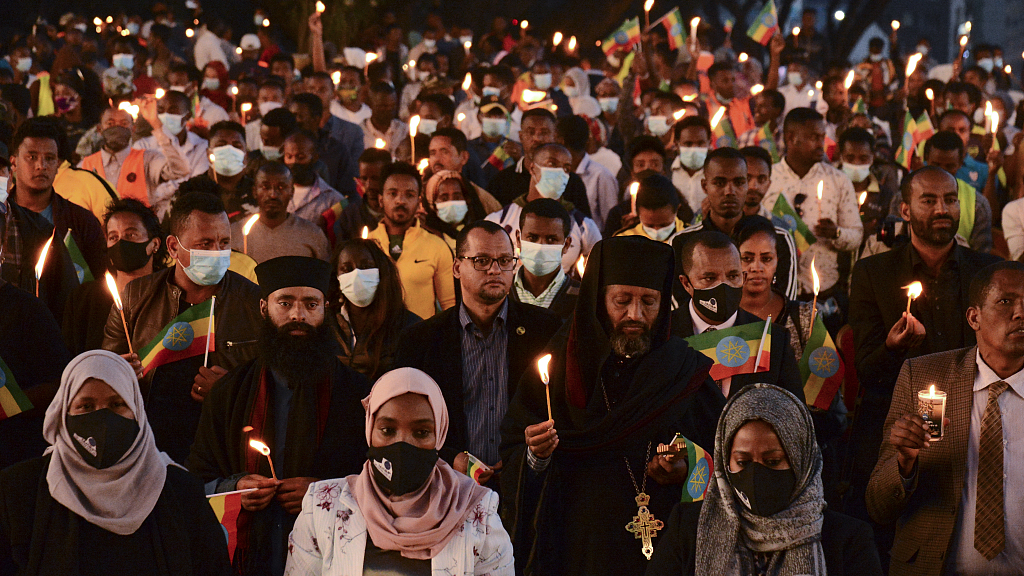 The public joins current and former Ethiopian military personnel to commemorate federal soldiers killed by forces loyal to the Tigray People's Liberation Front (TPLF) at the start of the conflict one year ago, at a candlelit event outside the city administration in Addis Ababa, Ethiopia, November 3, 2021. /VCG

The public joins current and former Ethiopian military personnel to commemorate federal soldiers killed by forces loyal to the Tigray People's Liberation Front (TPLF) at the start of the conflict one year ago, at a candlelit event outside the city administration in Addis Ababa, Ethiopia, November 3, 2021. /VCG

Editor's note:  Fikrejesus Amahazion is an educator and researcher based in East Africa. The article reflects the author's opinions and not necessarily those of CGTN.

Last week, the United States Department of the Treasury's Office imposed unilateral sanctions against Eritrean individuals, national institutions, and government entities in connection with the ongoing conflict in Ethiopia. The year-long Ethiopian crisis was sparked in early November of last year. The violent conflict has led to the loss of numerous lives, considerable destruction, and a widespread humanitarian crisis, as well as threatened to destabilize the Horn of Africa region.

In response to the unilateral sanctions, which are a flagrant breach of the fundamental principle of sovereign equality in international law and violate the basic norms of international relations as enshrined in the United Nations Charter, the Eritrean government issued a strong press statement deploring the "unwarranted" sanctions and describing them as a continuation of "misguided and hostile" policies by the U.S. For its part, the government of Ethiopia also condemned the sanctions, explaining that it never lodged any grievances to the international community in regard to Eritrea but implores the international community to strongly condemn the TPLF and target it for tough actions.

Notably, on November 18, China's Foreign Ministry spokesperson, Zhao Lijian, expressed China's own stance on the recent unilateral move by the U.S. In particular, the spokesperson explained that China opposes "interference in other countries' domestic affairs with the use or threat of unilateral sanctions." He added, "China hopes that the parties concerned will prudently handle relevant issues and play a constructive role in maintaining peace and stability in the Horn of Africa."

The response by China opposing the unilateral sanctions highlights a number of key points. The first is that it serves as another reminder of China's long-standing opposition to so-called power politics and hegemonic bullying, as well as its belief that although countries can - and in fact often do - disagree, sometimes very strongly, they should properly resolve their differences through equal consultations on the basis of mutual respect. Contrary to some highly inaccurate and outright erroneous perceptions which are frequently peddled in the West, China has consistently been a firm and staunch supporter of multilateralism, while remaining strongly committed to the UN-centered international system and the international order underpinned by international law. This was also recently demonstrated by the fact that earlier this year China, along with 16 other countries, was one of the founding members of the Group of Friends in Defense of the UN Charter.

The recent imposition of unilateral coercive economic measures by the U.S.is a flagrant breach of the fundamental principle of sovereign equality in international law and violates the basic norms of international relations as enshrined in the UN Charter, countless UN General Assembly resolutions, charters of various regional organizations, such as the Charter of the Organization of American States and the Constitutive Act of the African Union, and numerous international treaties, including the Vienna Convention on the Law of Treaties. As stated unequivocally in Chapter VII of the UN Charter, it is the UN Security Council—and only the UN Security Council — that may impose measures including "interruption of economic relations and of rail, sea, air, postal, telegraphic, radio, and other means of communication." 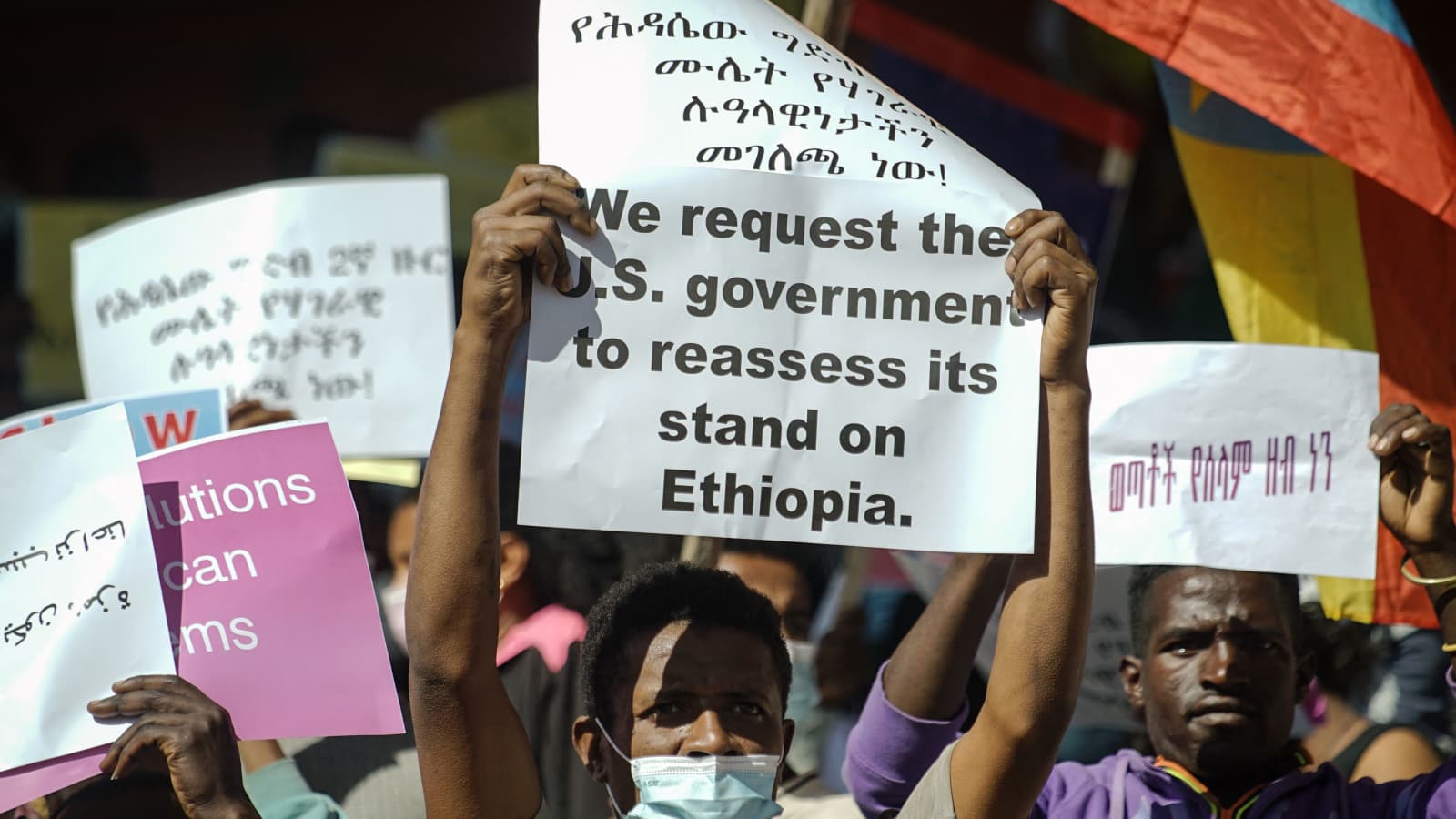 Protesters hold their messages during a massive rally to rail against the U.S. imposing restrictions on economic and security assistance over the conflict in the Tigray region at Addis Ababa soccer stadium in Addis Ababa, Ethiopia, May 30, 2021. /Getty

Protesters hold their messages during a massive rally to rail against the U.S. imposing restrictions on economic and security assistance over the conflict in the Tigray region at Addis Ababa soccer stadium in Addis Ababa, Ethiopia, May 30, 2021. /Getty

Within this overall context, then, China's expression of opposition to the recent unilateral move by the U.S. is a clear illustration of its own commitment to multilateralism and the UN-centered international system.

The second important point arising from China's opposition to the sanctions is that it helps to vividly reveal one of the fundamental reasons why African countries, and many other countries across the broader developing world for that matter, appreciate and positively gravitate toward China. Although many in the West promote a Sino-phobic narrative and warn Africans of the alleged dangers of growing engagement and cooperation with China, the populations of many African countries regard China much differently. Recent public attitudes surveys, carried out in 18 African countries between 2019 and 2020 by the nonpartisan research institution Afrobarometer, demonstrate that African perceptions of China are generally positive. This is down to several reasons: China's socio-economic, infrastructural, technological, and developmental assistance to the continent; the strong contributions by China to peacekeeping missions and its support for the African Standby Force; and China's sharing of lessons and successful experiences.

Along with the above, African countries genuinely appreciate China's solidarity and its commitment to the principles of sovereignty, mutual respect. A fundamental plank of China's foreign policy approach toward Africa is its support for African nations' desire to be an equal partner in international affairs and the African Union's principle of "African solutions to African problems." Indeed, Yemane Gebremeskel, Eritrea's Minister of Information, described China's opposition to the unilateral sanctions as "commendable" and "principled."

Finally, the conflict in Ethiopia is undoubtedly an immense tragedy. It must end. Cooperative engagement by the international community, based on sovereignty, the UN system, and mutual respect —and exemplified by China's approach —probably stands a better chance of acceptance by local actors than externally imposed, coercive measures.