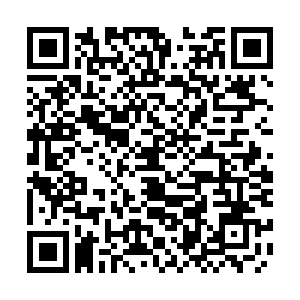 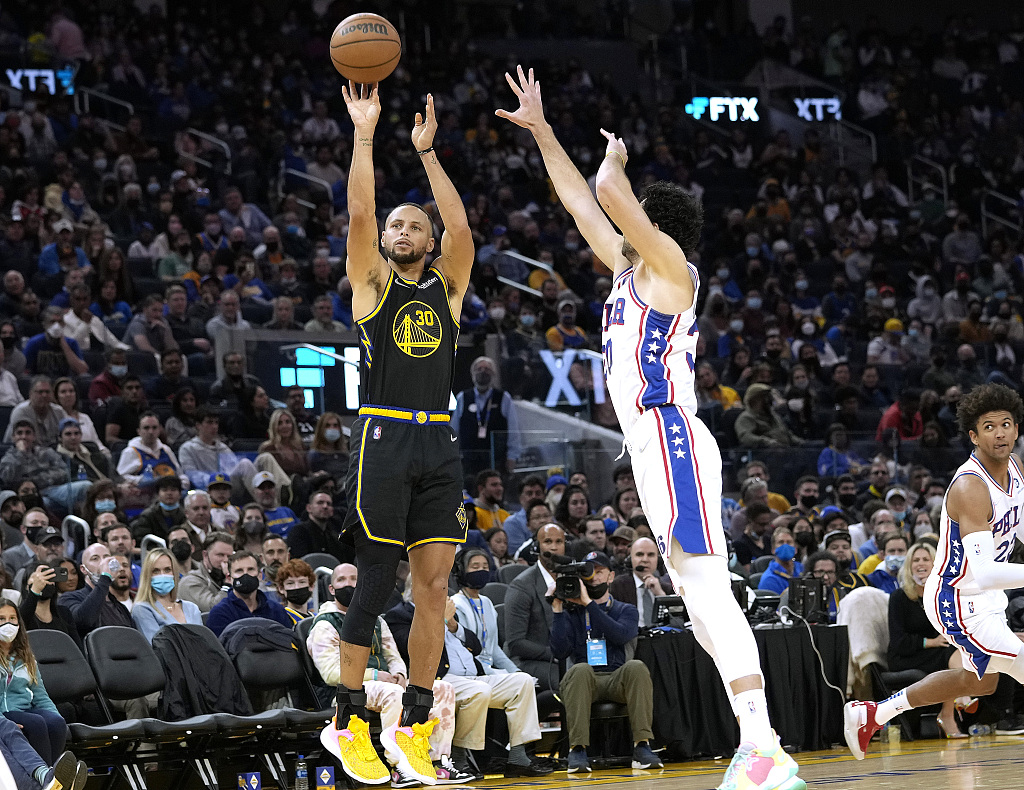 Stephen Curry (#30) of the Golden State Warriors shoots in the game against the Philadelphia 76ers at Chase Center in San Francisco, California, U.S., November 24, 2021. /CFP

Stephen Curry (#30) of the Golden State Warriors shoots in the game against the Philadelphia 76ers at Chase Center in San Francisco, California, U.S., November 24, 2021. /CFP

Although it's a big win at home, the Warriors once trailed by as many as 19 points in the game, which said a lot about the 76ers' improvements this season. The team did not even have a franchise player in many of their recent games due to the Ben Simmons drama, Joel Embiid's COVID-19 situation and Tobias Harris' injury.

But the 76ers caused enough trouble for the Warriors in Wednesday's game, especially in the first half. Seth Curry gained nothing from downtown but shot to kill in the middle range. If the defender decided not to go underneath the screen, Seth Curry charged the paint and made layups against the Warriors' big men. 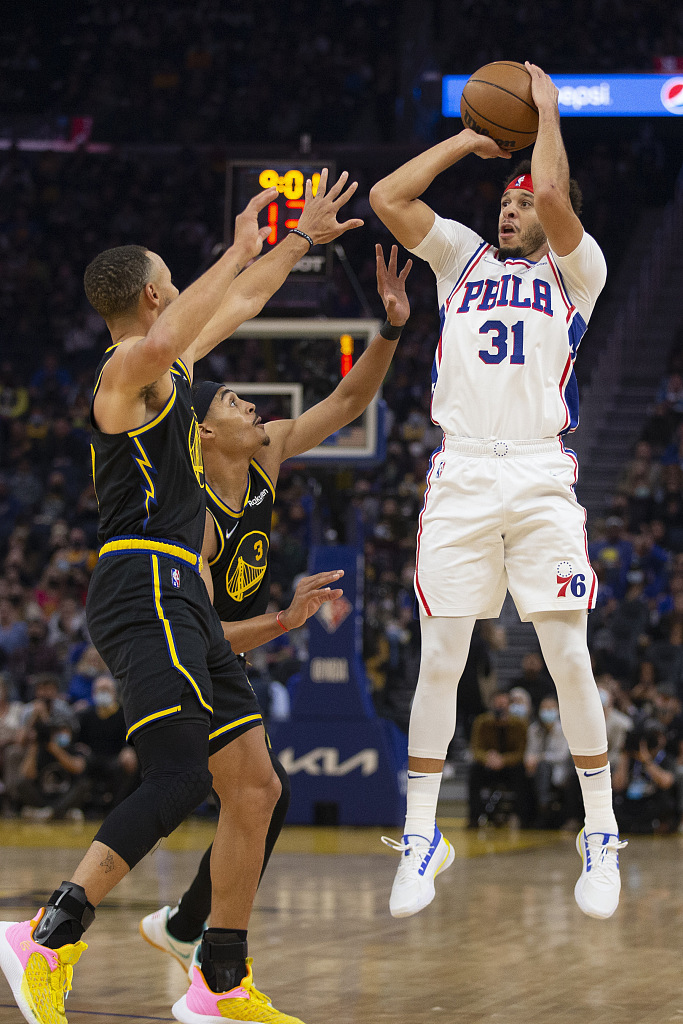 Seth Curry (#31) of the Philadelphia 76ers shoots in the game against the Golden State Warriors at Chase Center, November 24, 2021. /CFP

Seth Curry (#31) of the Philadelphia 76ers shoots in the game against the Golden State Warriors at Chase Center, November 24, 2021. /CFP

The younger Curry and Tyrese Maxey, plus the Warriors 10 turnovers, put the 76ers at a nine-point lead (61-52).

However, that lead proved too fragile when the ball began to flow smoothly for the Warriors. The team went 5-8 at the 3-point line and 8-11 in two-point field goals (FGs) with 11 assists. They had no one reach double-digit points in this quarter, but their offensive system, like a well-oiled machine, made scoring look so easy and assured.

But the Warriors' trump card has always been their intensive defense, which allowed only 12 points and forced six turnovers by their opponents in the last quarter. With Seth Curry unable to make tough shots as he did earlier in the game, his team's offense was basically paralyzed. 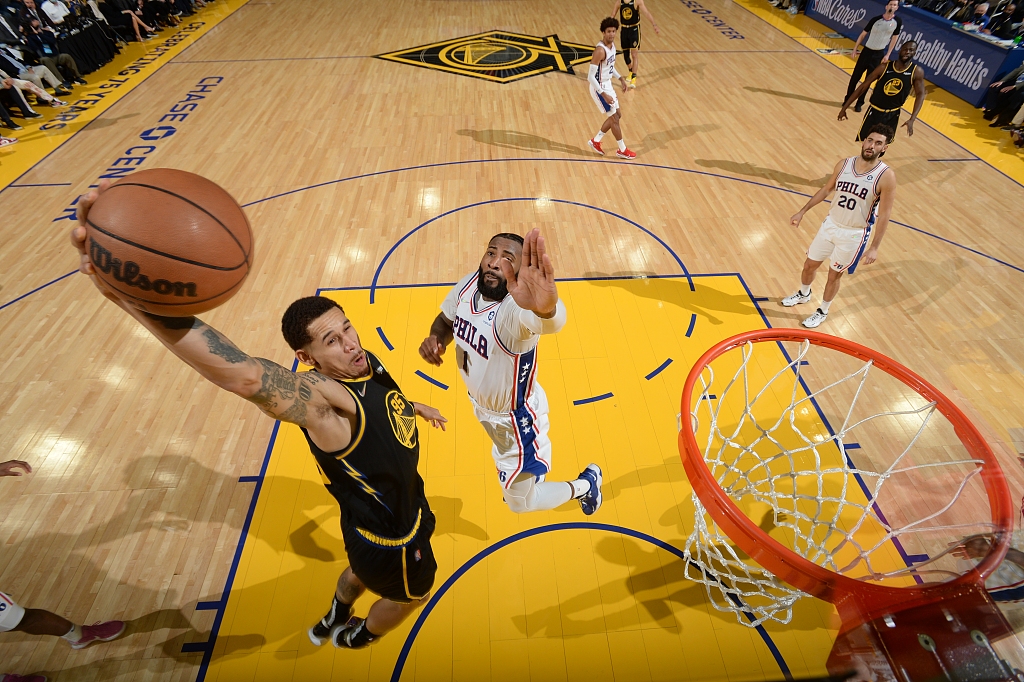 Juan Toscano-Anderson (L) of the Golden State Warriors drives toward the rim in the game against the Philadelphia 76ers at Chase Center, November 24, 2021. /CFP

Juan Toscano-Anderson (L) of the Golden State Warriors drives toward the rim in the game against the Philadelphia 76ers at Chase Center, November 24, 2021. /CFP

Seth Curry's big brother Stephen Curry had 25 points and 10 assists after draining six triples for the Warriors. Andrew Wiggins missed six jumper attempts, but he was 4-4 under the rim. However, many of the kudos at Chase Center on Wednesday night must go to Juan Toscano-Anderson, who was 6-6 in FGs to put down 13 points, six rebounds, six assists, one steal and two blocks.

Toscano-Anderson, an undrafted and undersized forward at 1.98 meters tall, only began to play in the NBA last year at 27. He is an excellent example of role players who do not waste time counting the number of zeroes in their salary when looking for a job. He always gives his all when defending and competing for rebounds and is athletic enough to finish a two-handed putback dunk. More importantly, Toscano-Anderson plays with his brain, making him a good fit for the Warriors' complicated system.

"It's great as a coach to know you can always count on a player like Juan who can start. He can be your eighth man. He can be your 12th man. But you always know what you're getting," Warriors head coach Steve Kerr said.

"I'm a grown-a– man," Toscano-Anderson said. "And things aren't always going to go my way or the way that I want them to, and life is about how you respond to different situations. I'm not afraid to do the dirty work, whatever it is. I'm just going to play hard all the time. I love this game, and I'm appreciative to have an opportunity." 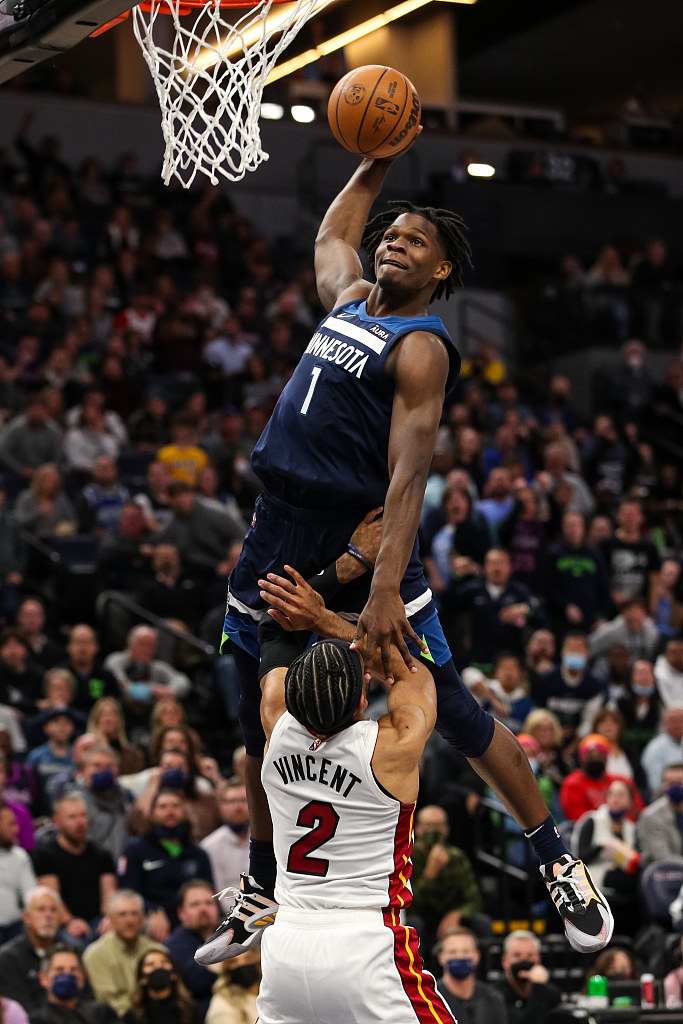 Anthony Edwards (#1) of the Minnesota Timberwolves dunks in the game against the Miami Heat at Target Center in Minneapolis, Minnesota, U.S., November 24, 2021. /CFP

Anthony Edwards (#1) of the Minnesota Timberwolves dunks in the game against the Miami Heat at Target Center in Minneapolis, Minnesota, U.S., November 24, 2021. /CFP

The Minnesota Timberwolves beat the Miami Heat 113-101 at Target Center on Wednesday, extending their winning streak to five.

Anthony Edwards was the most dominant player on the floor of both sides. The second-year young man dropped 33 points, 14 rebounds, six assists and three steals for the Timberwolves. He made six 3-pointers, went 7-10 in the paint and contributed 11 points in the third quarter when his team rallied to overcome the trail.

"He took over the game. Simple as that," Edward's teammate D'Angelo Russell said. "He was guarding; he was moving; he was boxing; he was rebounding. I think we're watching him grow in front of us, just all around." 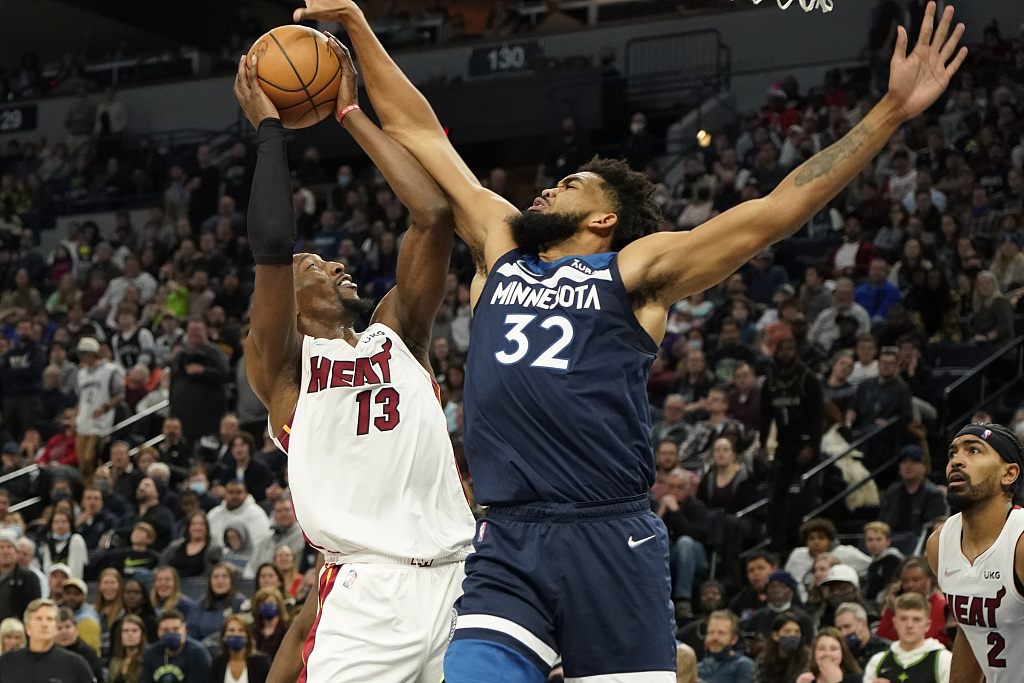 Karl-Anthony Towns (#32) of the Minnesota Timberwolves defends Bam Adebayo of the Miami Heat in the game at Target Center, November 24, 2021. /CFP

Karl-Anthony Towns (#32) of the Minnesota Timberwolves defends Bam Adebayo of the Miami Heat in the game at Target Center, November 24, 2021. /CFP

The Timberwolves did an excellent job of controlling the offensive glass by grabbing 15 offensive rebounds, seven of which came from Jarred Vanderbilt. These rebounds were turned into 15 second-chance points. The team also led the Heat in points in the paint (40-28) and fast break points (25-15), exposing the Heat's biggest problem today – a lack of consistent scoring ability.

Five Heat players got double-digit points on Wednesday, but none of them reached 20. Duncan Robinson (6-16) and Tyler Herro (5-18) took the most attempts of the team, but 26 of their shots happened behind the arc, and they missed 17 of them. Though Bam Adebayo was very efficient under the rim to 14 points, his individual attack was not threatening enough to change the Timberwolves' defense. Moreover, when Adebayo could not score like he did in the second half, the Heat had no reliant one to go to for offensive contributions on Wednesday. That is why the team only had 39 points in the last two quarters.

Other games on Wednesday (away teams come first):