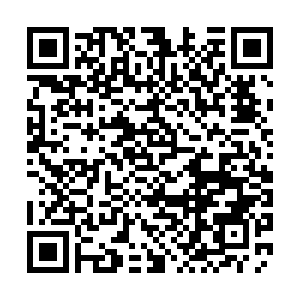 Chinese State Councilor and Foreign Minister Wang Yi on Friday called on China, Russia and India to carry forward the spirit of openness, unity, trust and cooperation and shoulder their responsibility for maintaining world peace and stability.

Wang made his remarks when attending the 18th Meeting of Russia-India-China (RIC) Foreign Ministers via video link with his Russian counterpart Sergei Lavrov and Indian counterpart Subrahmanyam Jaishankar.

In the face of the unprecedented changes in a century, Wang pointed out the choices made by China, Russia and India will not only affect their respective interests, but also the direction of human progress.

He said China is willing to work with Russia and India to take up responsibilities as a major country, play a leading role and send a positive signal to the world to practice genuine multilateralism, enhance the democratization of international relations, join hands to fight against the pandemic, promote economic recovery and jointly maintain world peace and stability. 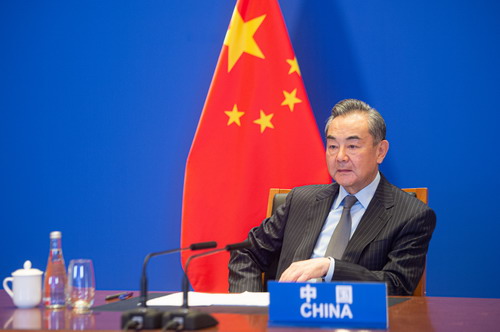 According to Wang, it is necessary to respect all countries' legitimate rights and interests and their independent choices of development path.

The U.S.-proposed "summit for democracy" draws lines based on the criteria of one country, Wang pointed out. He added the so-called summit will only create division and confrontation and bring negative energy to the world.

He added that the U.S. sees itself as a world leader and demands that all countries look to the U.S., which is contrary to the process of democratization of international relations.

The practice of democracy varies from country to country and cannot be a template or a specification, Wang stressed, adding that the needs and aspirations of the people of the country are the starting point, and also the foothold of democracy.

China, Russia and India have taken the path of development in line with their respective national conditions, and have the responsibility to establish a correct "concept of democracy" in the world, he added.

Wang called for jumping out of the "democracy trap" of individual countries, and opposing interference in the internal affairs of other countries in the name of democracy.

The Chinese foreign minister also voiced the necessity of strengthening global cooperation in the fight against the pandemic. He said China, Russia and India should continue to support each other's efforts to fight against COVID-19 and carry out practical cooperation in areas including minimizing the risk of cross-border transmission, detection means, therapeutic drugs, and vaccine research, development and production.

Wang again called for treating COVID-19 origins tracing as a scientific matter and opposing attempts to politicize the pandemic and use virus origin-tracing as a tool.

He reiterated the commitments to make vaccines a global public good for fair and reasonable distribution and called for improving the accessibility and affordability of vaccines in developing countries, and jointly building a global community of health for all.

China expects Russia and India to jointly participate in Global Development Initiatives and contribute to accelerating the implementation of the UN 2030 Agenda for Sustainable Development and achieving a more robust, greener and healthier global development, he added.

Wang also called on the three countries to address hotspot issues through dialogue and consultation.

In terms of Afghan issues, he noted that an equal and respectful attitude should be upheld to actively guide all Afghan parties and ethnic groups while urging the U.S. and Western countries to effectively assume their responsibilities and provide humanitarian assistance to Afghanistan.

He urged international community's efforts to build a united front against terrorism and not to allow Afghanistan to become a breeding ground for terrorism again.

"We should continue to constructively participate in the political and diplomatic settlement process of the Iranian nuclear issue and promote the early return of the Joint Comprehensive Plan of Action (JCPOA) to the right track," Wang added. 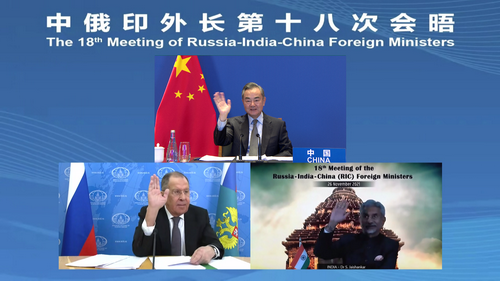 Lavrov and Jaishankar agreed that the three countries should enhance cooperation as it facilitates the steady growth of world peace.

The two foreign ministers called for joint efforts to safeguard UN's central role, the principle of sovereign equality as well as the real and effective multilateralism.

Given the current situation, they believe that the three countries should strengthen coordination and to further explore their cooperation potential so as to jointly tackle global challenges such as the epidemic, climate change and terrorism.

Russia and India voiced their support for China to take the rotating presidency next year and are ready to take the 20th anniversary of the meeting as an opportunity to step up the level and influence of the trilateral cooperation.

Stressing that a so-called free and open Asia-Pacific region is not an equal partnership, Lavrov said that the region has a long tradition of inclusiveness and harmony, thus, all parties should take actions to increase the regional diversity rather than driven by the Cold War mentality and form various clubs that aim to destabilize the region.

After the meeting, the three countries released a joint communique.