Download
What can be found on the train of the China-Laos Railway?
By Yang Jinghao 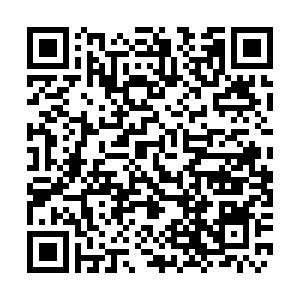 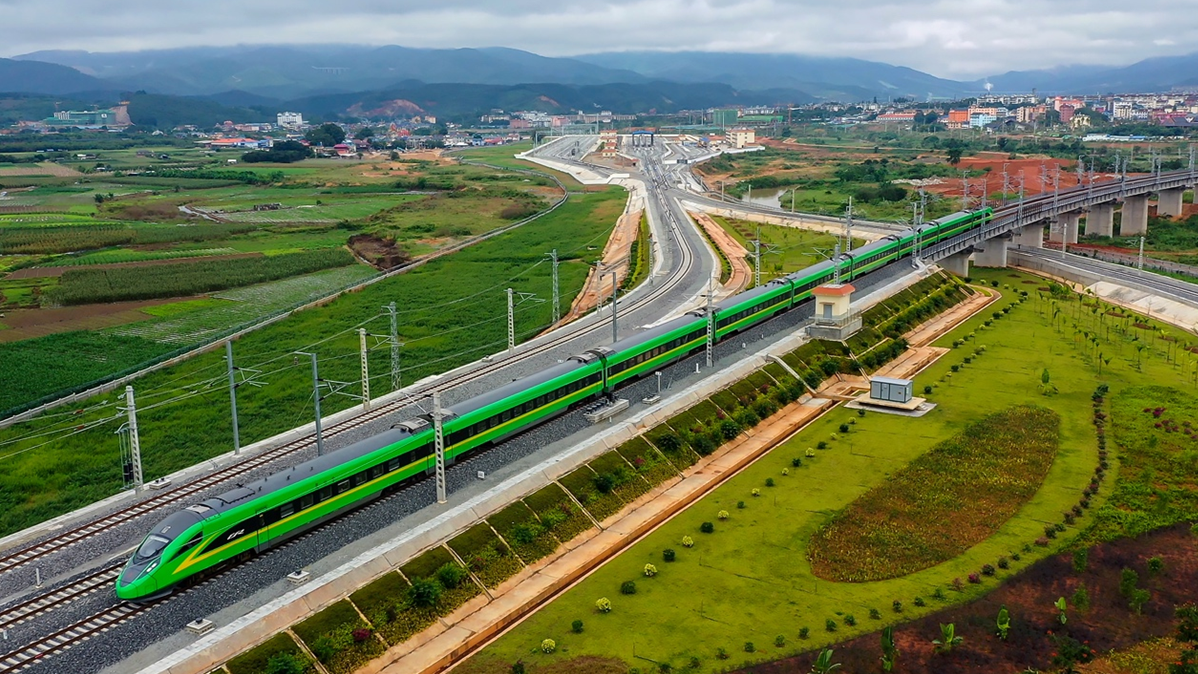 The China-Laos Railway went into operation on December 3. The 1,035-kilometer-long electrified line starts from the southwestern Chinese city of Kunming and stretches all the way south to the Lao capital of Vientiane.

The train running along the section in China is named "Friendship" and painted in light green. And the one running in the Lao section, the Lane Xang EMU (electric multiple unit), features red, blue and white, echoing the colors of the national flag of Laos. Both trains run at a speed of 160 kilometers per hour.

On the inauguration day of the railway, we got aboard the very first train setting out from Kunming. Here are some of the highlights we captured from the train. 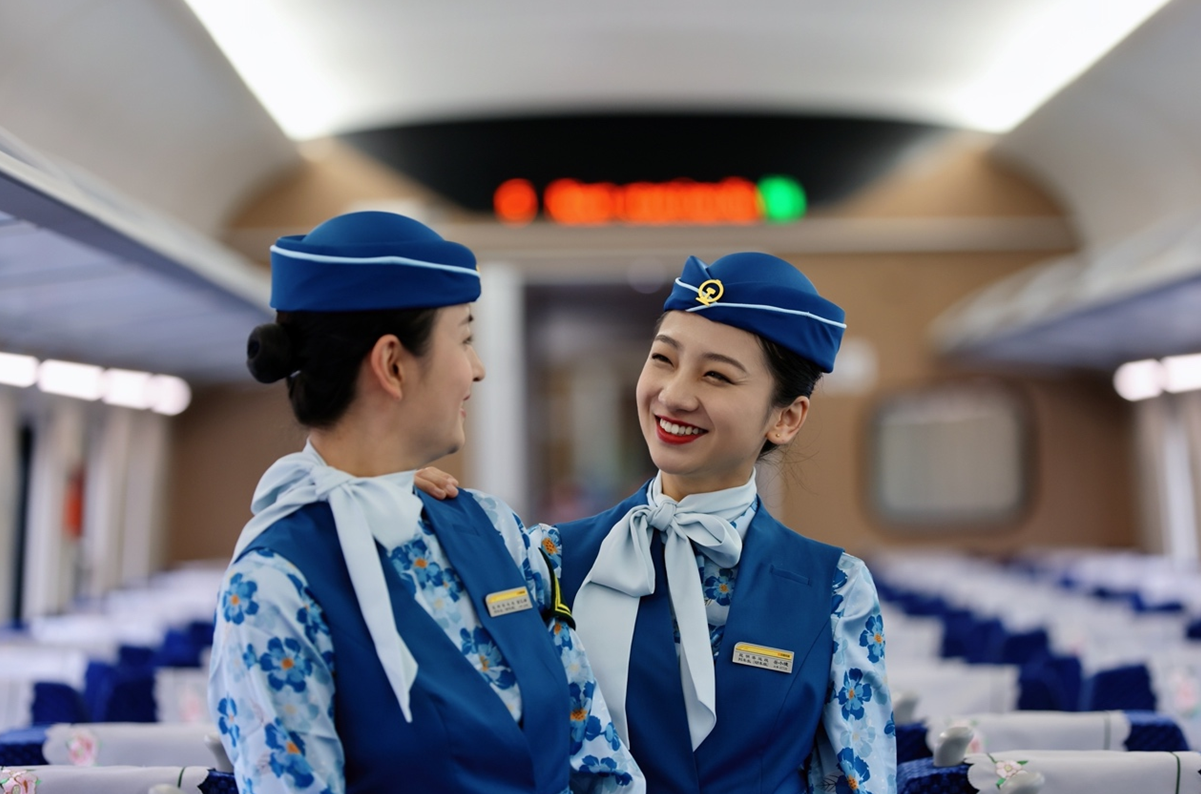 The uniform of train attendants is an integral part of a train. The uniform on this train is distinctive with rich connotations.

Zhao Yingjing, head of the train attendants, told me that the main color of the uniform is "peacock blue," as peacock is an iconic species of Yunnan, where the railroad starts. The flower painted on the shirt is camellia, which is considered as the provincial flower of Yunnan.

And the flower embroidered on the sleeves of the coat is peony, one of the best-known flowers in China. But it's special in that its color adopts that of frangipani, the national flower of Laos.

"The design of this detail tries to embody the friendship between the two countries," said Zhao. 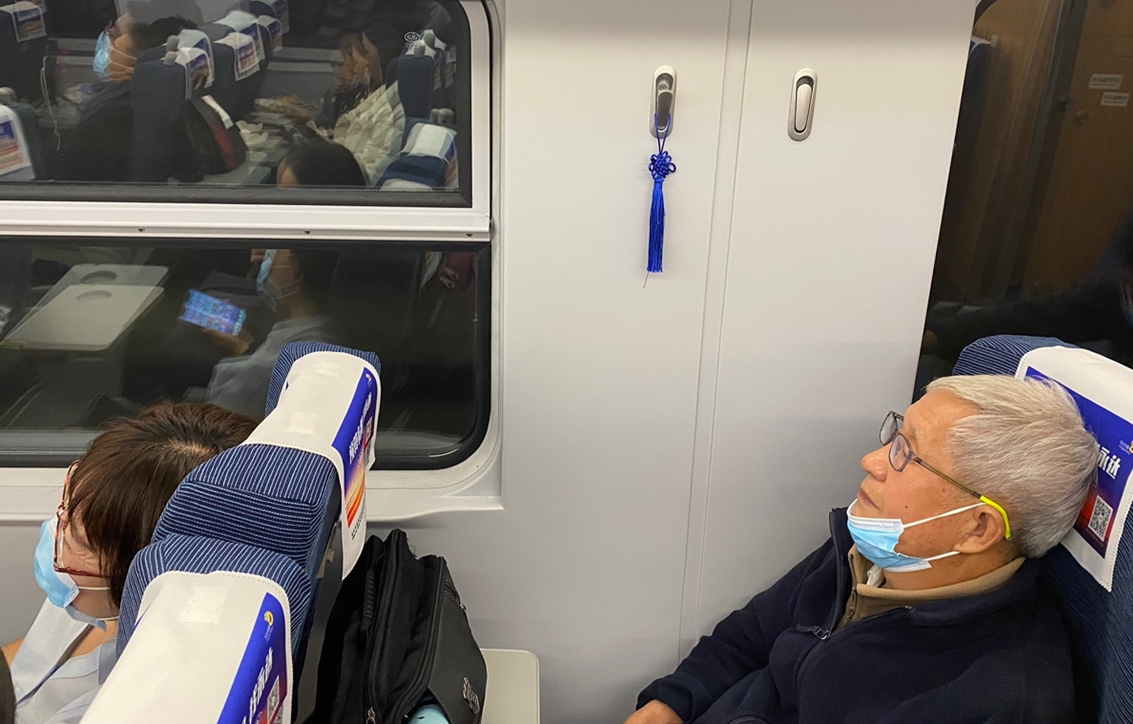 A blue Chinese knot is placed beside an elderly passenger. /CGTN

A blue Chinese knot is placed beside an elderly passenger. /CGTN

On this train, we can see a lot of thoughts have gone into how to better serve passengers. For example, colorful Chinese knots are provided.

Chinese knot is a traditional ornament Chinese people use during important festivals like the lunar Chinese New Year, known as Spring Festival. Here, it's used to represent different passenger groups with special needs, with blue standing for seniors, yellow for children, green for the sick, purple for the disabled and red for the pregnant.

"These are a reminder for our crew to quickly provide services to those in need," Zhao explained.

Meanwhile, people in need can also ask for help through a kind of beeper. When they press a red button, the receiving terminal the attendants hold will ring. 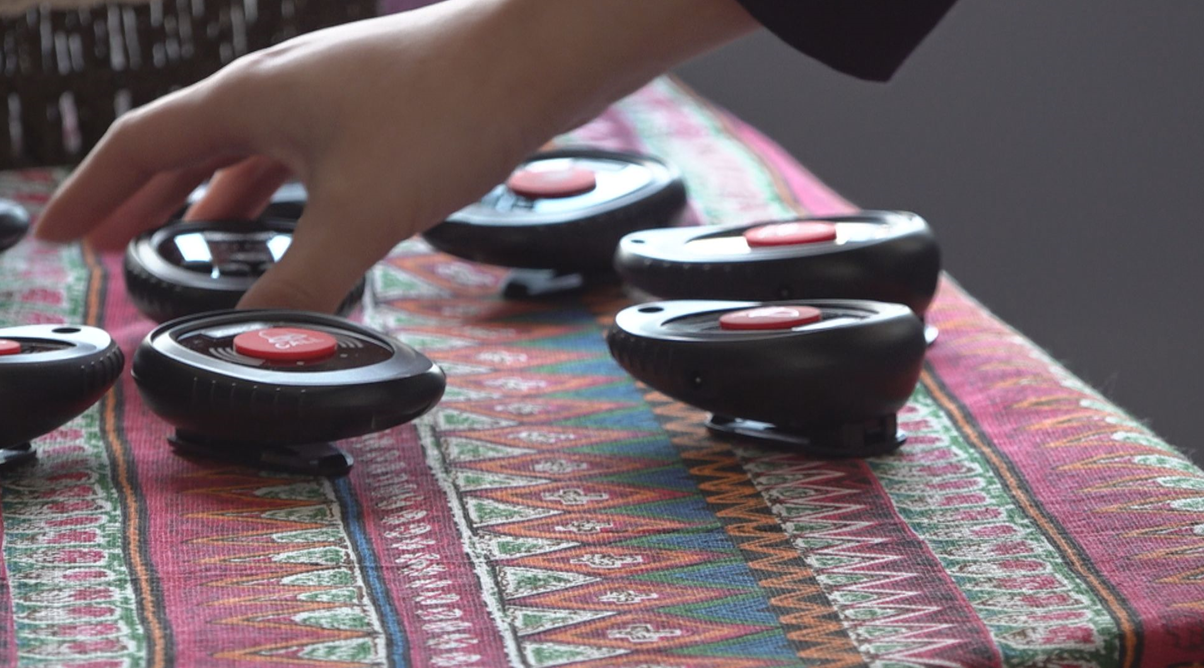 The luggage protectors on the train. /CGTN

The luggage protectors on the train. /CGTN

The last thing we would like to experience during a trip might be losing our luggage. On this train, you'll be reassured with a special invention at hand, which can be simply called "luggage protector."

Passengers can place the device on their suitcase and connect it with their cellphone through Bluetooth. Once the luggage is beyond certain distance, the cellphone will give an alarm.

Another highlight of this train is that passenger can enjoy multilingual service. When I was ready to board the train on Friday, the attendants just greeted me in both Chinese and Laotian. It's indeed a surprise.

The train announcement is even made in three languages, including English. And many tips on the train are also bilingual. Zhao told me that most of the attendants can speak some Laotian after receiving a period of training. As for herself, she can even speak Thai and English as she once studied in Thailand for some years.

"It's important for us to command more than one language as it's an international railway and we are expected to serve passengers from different countries," said Zhao. 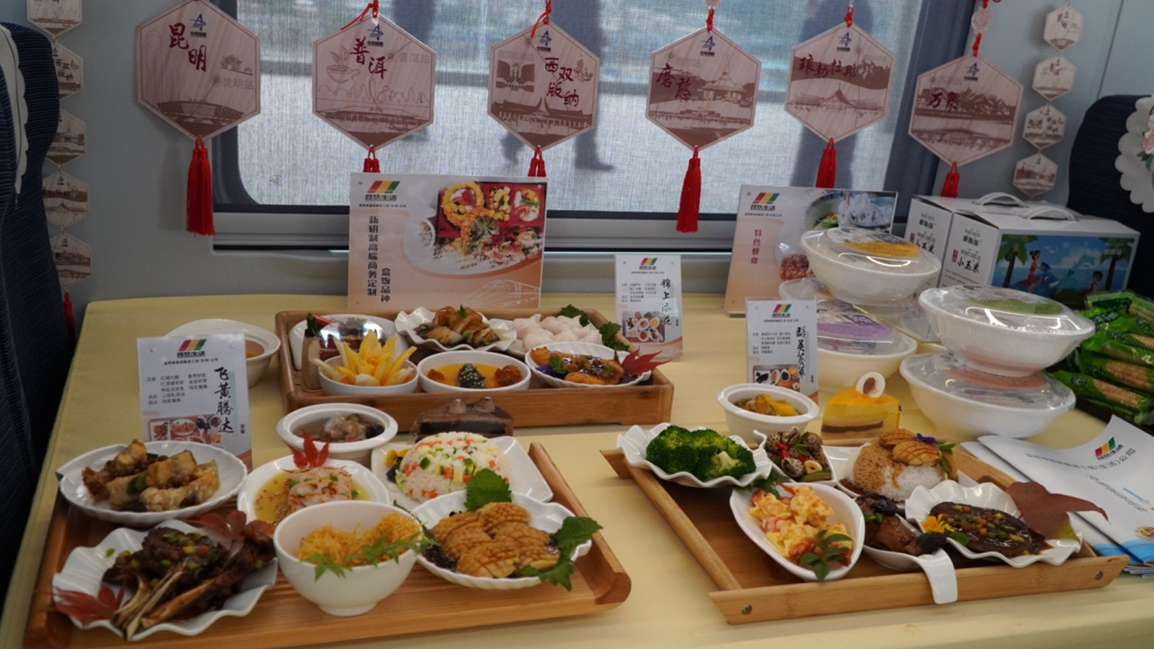 Food displayed on the train running on the Chinese section. /CGTN

Food displayed on the train running on the Chinese section. /CGTN

Good food is important, if you are spending hours on a train. And there are quite a few options here, including Yunnan cuisine and Western food.

Yunnan food is one of the most popular styles among Chinese cuisines, which features fresh ingredients from nature. Here, you can have a taste of a special dish called "pineapple rice," as well as rice noodle, the most popular snack in Yunnan.

If you're not interested in these, other options like pizza and coffee are also available. And of course, if you don't want to pay, at least you'll be served with free hot water. 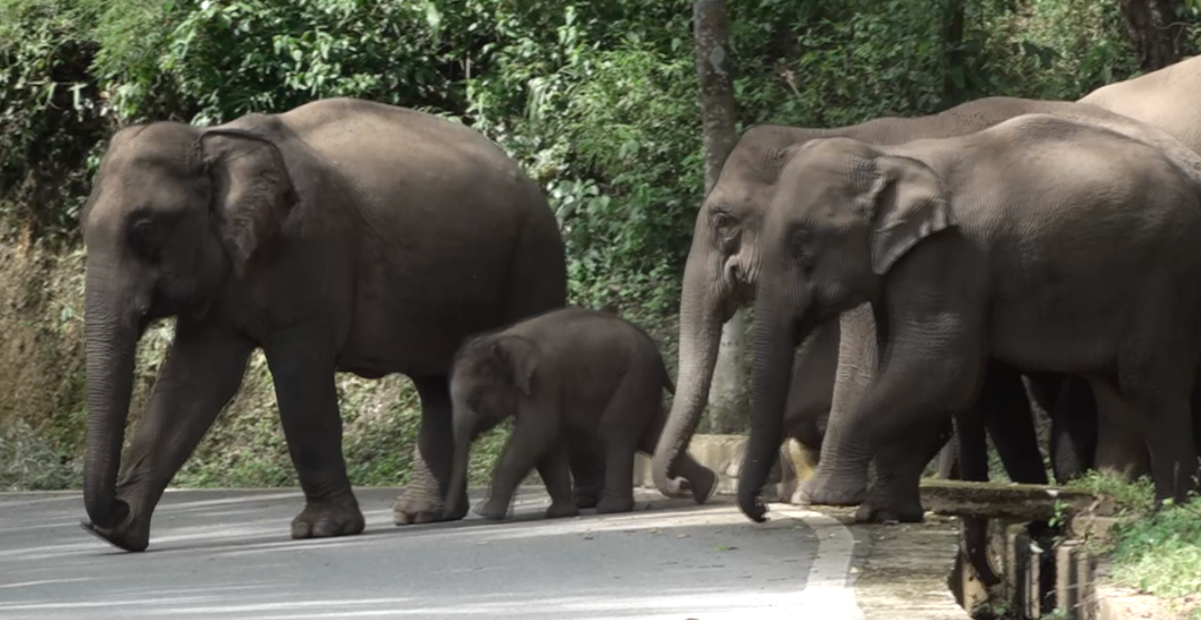 CGTN crew comes across with a herd of wild elephants near the Wild Elephant Valley Station of the railway, late September, 2021. /CGTN

CGTN crew comes across with a herd of wild elephants near the Wild Elephant Valley Station of the railway, late September, 2021. /CGTN

Yunnan is a place with abundant tourism resources. The railway passes through several places worth staying for an exploration. Kunming, the provincial capital of Yunnan, is dubbed China's "spring city" due to its pleasant weather all year round.

If you are a tea lover, do make a tour at the city of Pu'er, home to the renowned Pu'er Tea. And you may not know that the region is also well known for producing Arabica coffee bean.

Xishuangbanna is another place you don't want to miss. The prefecture is known for dense tropical rain-forests and unique Dai ethnic culture. Here you can learn all kinds of trees and plants you've never heard of, and even meet wild elephants. If you come here in April, you may be able to attend the grand Water Splashing Festival.

Of course, there are still a lot more worth recommending. In a word, do come and get on board the train. When the full connectivity is allowed when the pandemic eases off, you'll get to Vientiane from Kunming the same day. Isn't it exciting?