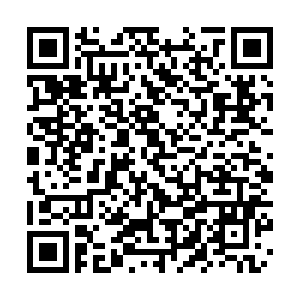 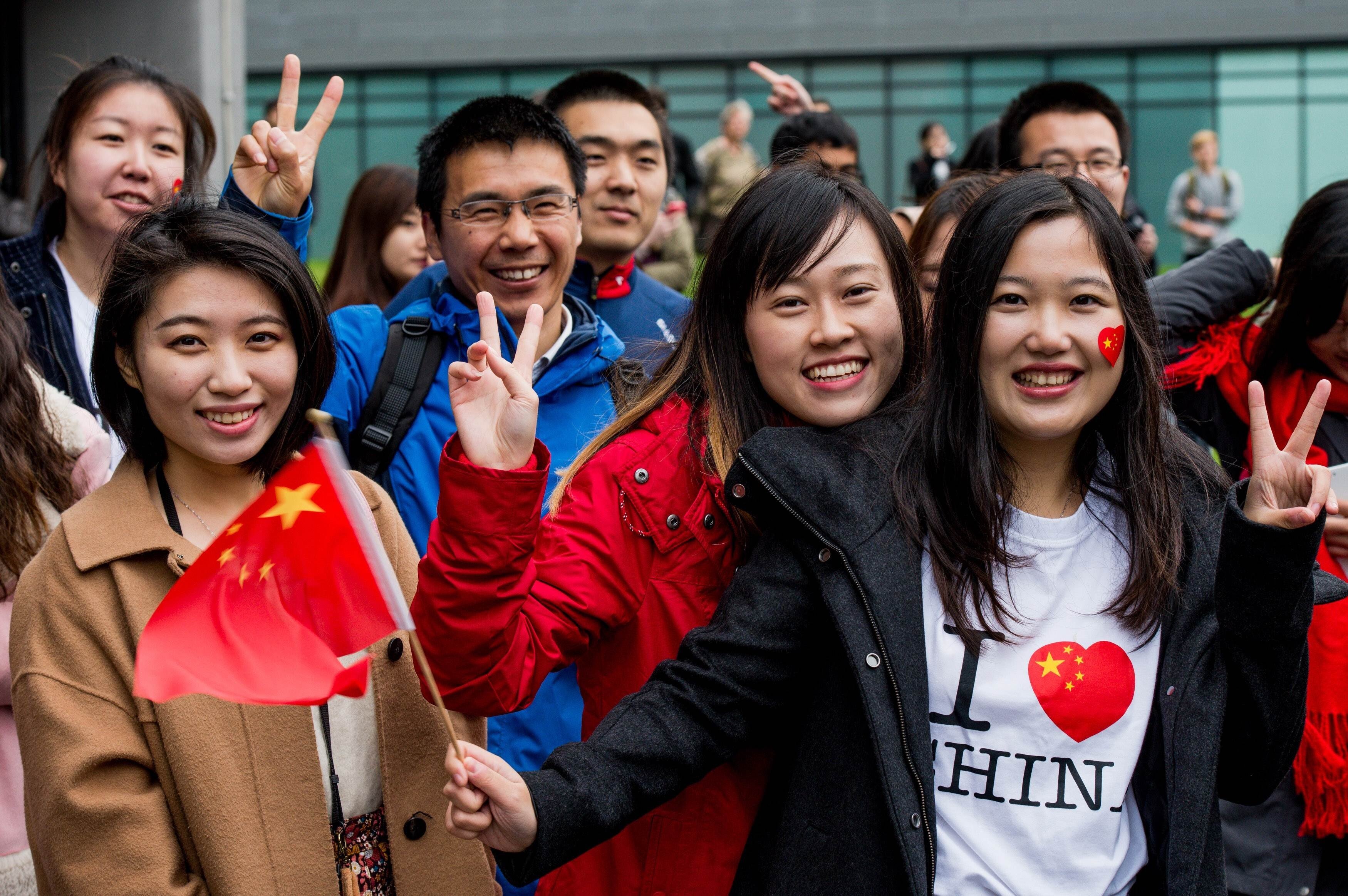 Chinese students pose for a photo at Manchester University in Manchester, the United Kingdom, October 23, 2015. /AFP

Chinese students pose for a photo at Manchester University in Manchester, the United Kingdom, October 23, 2015. /AFP

In China, students' appetite to pursue higher education abroad remains strong, but their destinations have grown more diversified over the past two years. Universities in Europe and Asia are gaining popularity while the those in the U.S. are losing some of attraction to a degree.

The still unfurling COVID-19 pandemic has much delayed Chinese students' overseas study plans but their demands remain, said a report on the development of Chinese students studying abroad in the 2020-2021 academic year, released in March by the Beijing-based think tank Center for China and Globalization and the Institute of Development Studies at Southwestern University of Finance and Economics.

The report also said that the growth rate of students studying in the U.S. has been declining over the past decade, from nearly 30 percent in 2009 to less than 1 percent in 2019.

On one hand, a proclamation issued by former U.S. President Donald Trump put many Chinese students in the plight of visa restrictions to study in the U.S., the most popular destination of Chinese students studying abroad for decades. On the other, the U.S. was slow in containing the virus at the beginning of the pandemic and is still seeing an average of 100,000 new cases a day. In addition, anti-Asian hate crimes see no sign of abating.

Due to such concerns, an increasing number of Chinese students planning to study abroad look to countries with stricter COVID-19 rules and more accommodating cultures.

The number of Chinese students enrolled in U.S. universities in 2020 declined by nearly 15 percent compared to that in the previous year, according to the Open Doors 2021 report released by the Institute of International Education, a New York-based nonprofit which focuses on international student exchange and aid.

"It has been difficult for Chinese students to get visas to the U.S. and also Canada in recent years, and relations between China and Australia have deteriorated, so more Chinese students are choosing to study in European and Asian countries," said Zhou Mansheng, executive deputy director of the Chinese Society of Educational Development Strategy.

The number of Chinese students studying in the UK grew 12 percent in 2021 compared with that in 2015, according to data from Statista, a Hamburg-based company specializing in market and consumer data. 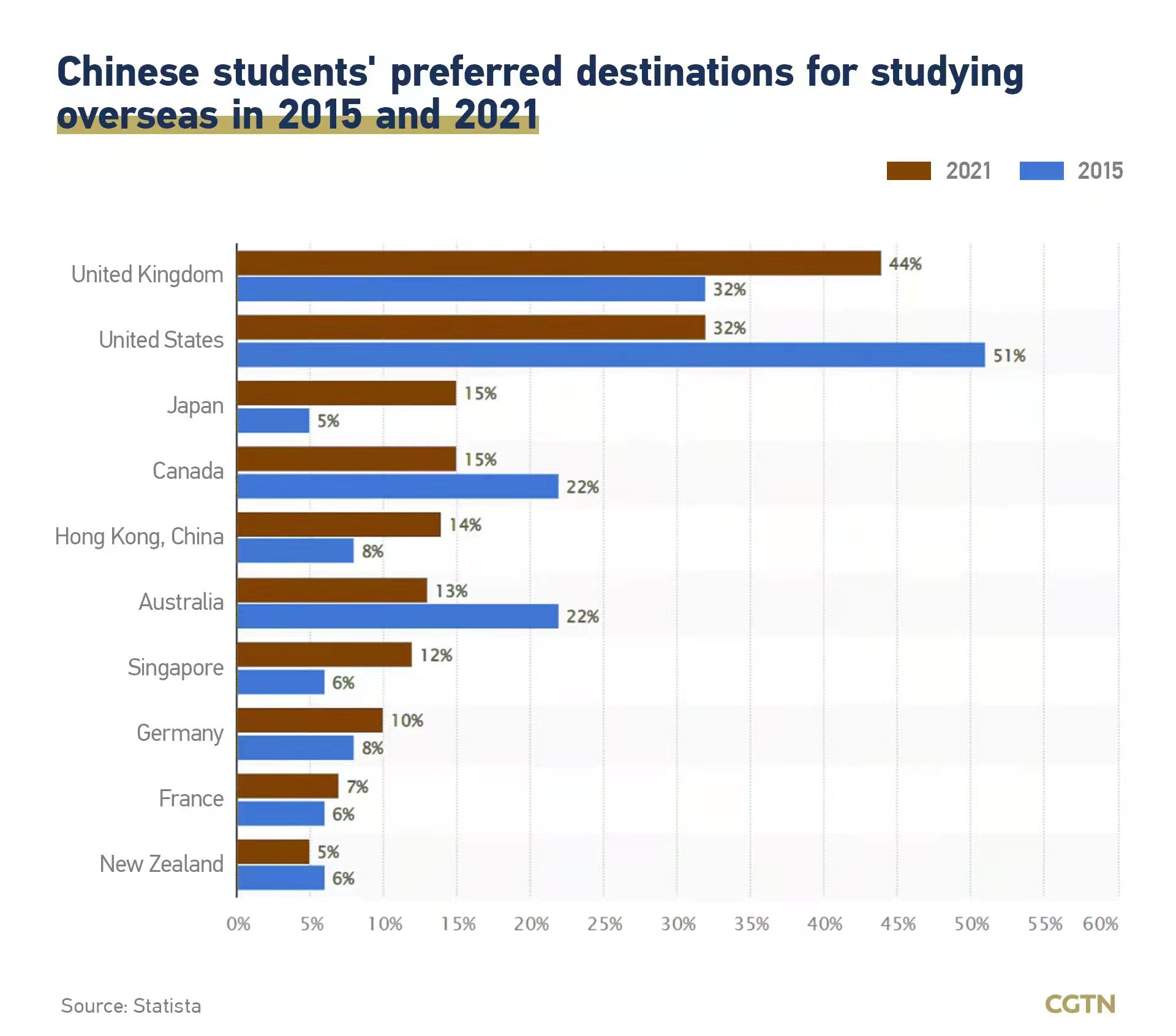 Jia Lifan, who acquired her master's degree at the University of Leeds this summer, is settling down in Chengdu, capital of southwest China's Sichuan Province.

Back in 2019, Jia aspired to study advertising and marketing, despite her undergraduate major of international political economy.

More than 80 percent of her classmates in the Central University of Finance and Economics chose a master's course rather than taking a job upon graduation. Jia said that fierce competition in China's labor market in recent years is pushing university graduates to pursue more advanced degrees, which in turn has raised the bar of admission to these programs.

After carefully weighing the pros and cons, she decided to apply for universities in the UK and Singapore as she became worried about increased political tensions between China and the U.S and the ensuing difficulty in getting a student visa.

Zhang Jingyi, like Jia, also set out to study in the UK last year. She hoped an advanced degree from a British school would make her more competitive in China's job market.

"I decided to study in the UK because Cardiff University is renowned for its communication and media studies, and it only takes one year to complete my postgraduate course which is efficient and cost-effective," Zhang said.

Liu Xiao'an, founder of an overseas study agency based in Beijing, also noted Chinese students' increasing preference for Singapore and the UK as destinations of overseas education among his clients.

Liu said his business was heavily hit in 2020, a rare situation he hadn't experienced since he entered the industry in 2005. But the number of applicants bounced back quickly, reaching 80 percent of the pre-pandemic level as of this autumn.

A different look in the job market

Even before the reform and opening-up in the late 1970s, China had recognized the need for students to study overseas and sponsored dozens of the country's top talents to learn advanced knowledge in mathematics, engineering and other fields in the U.S. In 1984, it officially began allowing students to do so out of their own pockets.

The move unleashed a wave of enthusiasm for studying abroad as it represented unprecedented opportunities. Those who returned upon completion of their degrees quickly occupied key positions in a variety of industries as business leaders and leading academics. "Beijinger in New York," a novel that tells the story of a Chinese immigrant's struggle in realizing his American dream became the No. 1 bestseller in the country in 1991 and was later adapted to a successful television series.

As China's miraculous economic growth propelled the rise of an ever-expanding middle class, the number of Chinese students who decided to study abroad has increased nearly threefold over the past decade to over 700,000 in 2019, according to the Ministry of Education.

Most of the students came back with an international degree, hoping to benefit from improved working and research environment inside the country as "sea turtles," a homophone of the Chinese term "haigui," referring to graduates who have returned after having studied abroad for several years.

Data from China's Ministry of Education shows 80 percent of Chinese students studying abroad between 2016 and 2019 – about 2 million – returned to China after graduation. The trend gained a strong momentum in 2020, when the number of "sea turtles" seeking jobs in China surged by 34 percent, according to a related report by Zhaopin.com, a recruitment service in China. Due to the impact of the COVID-19 pandemic, more are planning to come back as forecast by the report.

As the number of well-paid positions in China's job market didn't change much, if not dwindled, these "sea turtles," fresh from university, found that they were not as highly sought after by employers as expected. The job market also follows the supply-demand mechanism.

Zhou pointed out that studying abroad does not necessarily guarantee a good job, considering the increasing number and quality of new college graduates in China. Employers have also improved their ability in identifying levels of overseas universities over the years. Moreover, subjects studied by such overseas-trained talents have to match the job positions in China.

In Beijing, Zhang is ready to start her career with an offer that arrived last month, while Jia is still looking for an ideal job in Chengdu, like many of her peers. She said that studying in the UK was one of the biggest challenges in her life and a valuable experience.